Hello Expressers!
Wait, that’s not a thing, is it?

Well anyway, it has been a a little quiet on the Priceline Express Deals front – if you missed our previous posts, you might want to hop over to the Hilton-Orlando Bonnet Creek post to see some great deals for that resort. We had also written about a nice batch of All-Star Movies and Animal Kingdom Lodge deals in a December Deals post.

Sadly, Priceline Express has continued to ignore November, and even for a time this week had pulled down the December deals for Disney resorts. However, they came back with some additional Movies deals, so we wanted to give you all the opportunity to grab them if you’re hoping to take a trip around Christmas.

But, I also have a pretty important tip to help you identify resorts on Priceline –

In addition, I have a warning for you when looking to book Swan deals.
But first, let’s take a look at the the current calendar with those updated December deals… 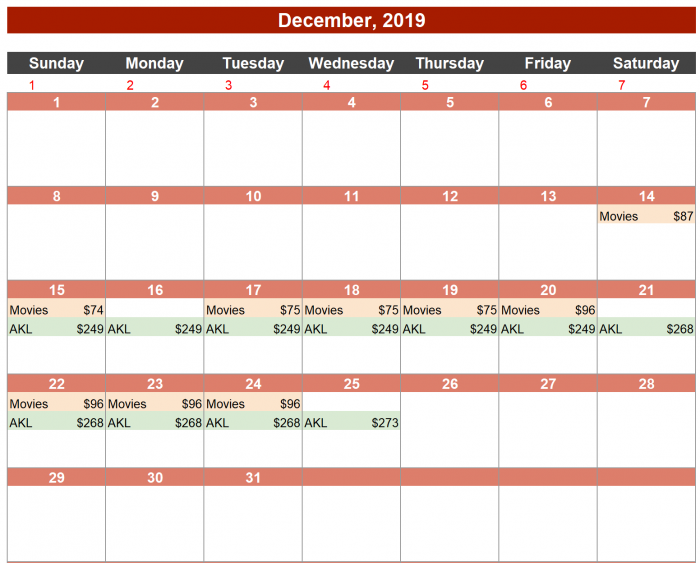 When Priceline re-released these December deals, they expanded the Movies deals almost a week back from the original start date of the 20th. The Animal Kingdom Lodge deals are still tricky to tease out: you have to search for multiple days. Plus, the earliest date you can use is 12/15 and the latest is 12/24.

You may see the it show up in search results that start earlier or end later, but when you click on those deals they’ll likely ghost away with a “Sorry! That deal is gone.” These Animal Kingdom Lodge deals do seem to be in flux, so I’m guessing they’ll come and go as time marches on.

If you’ve searched for Disney resorts on Priceline Express, you probably have these amenities committed to memory: Free Internet Access, Swimming Pool, Restaurant.

If you saw *only* those amenities on a deal in the search results for Bonnet Creek or Disney Springs, it was as close to guaranteed to be a Disney resort as you can get.
(Some caveats: When you visited the deal’s booking page,  an additional amenity Outdoor Pool was added for a total of 4 amenities there. Also, a couple of resorts have additional amenities, but lets get back on track here.)

However, as of yesterday I noticed that both the Movies and AK Lodge deals had a couple of those amenities swapped out! The search result listings now have Swimming Pool, Restaurant, and No Smoking Rooms/Facilities.

When clicking through to the booking page, you’ll notice that Outdoor Pool has been replaced by Handicapped Rooms/Facilities. 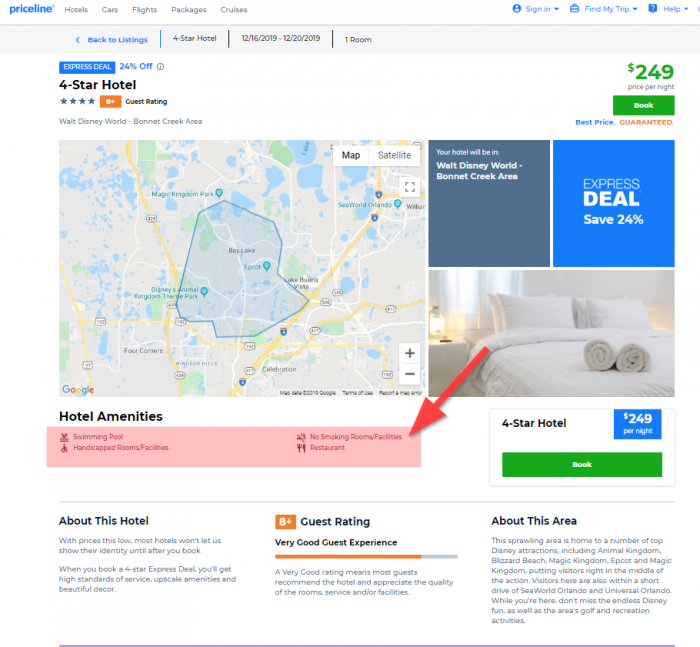 With only a limited number of Express Deals to play with, it will take time to verify if this change has been made on all of the Disney resorts. But, I think it is a good bet they have.

If you have gotten this far in the post, may Tiny Tim’s Christmas blessings fall upon you.

You win an additional tip: If you happen to be searching for deals and find an enticing 4.5-star 8-guest rated resort deal in Bonnet Creek that also has a mandatory fee (aka resort fee), there’s a very good chance it is for the Swan. (In fact, it is the only 4.5* resort in Bonnet Creek with a mandatory fee.)

Now, Priceline likes to play games with mandatory fees: it will sometimes randomize them so they are slightly different than the resort’s actual fee. They will also completely leave them off of the deal – which lately seems to be happening much more. (Priceline’s booking terms state it is up to the buyer to pay the fees whether they are shown on the deal or not.)

But today. Today I saw the grandfather of all mandatory fees on some Swan deals.

Now, I have to hope this is a completely technical problem, but I encountered it on multiple listings: a very likely Swan resort deal for $169 with a nightly mandatory fee of… wait for it… $156.94. (The normal Swan resort fee is $33.75.) Plus, to book this deal you need to remember to add in the normal room “Taxes and Fees” and end up with a final booking cost for $376.91 for a single night. *falls on floor* 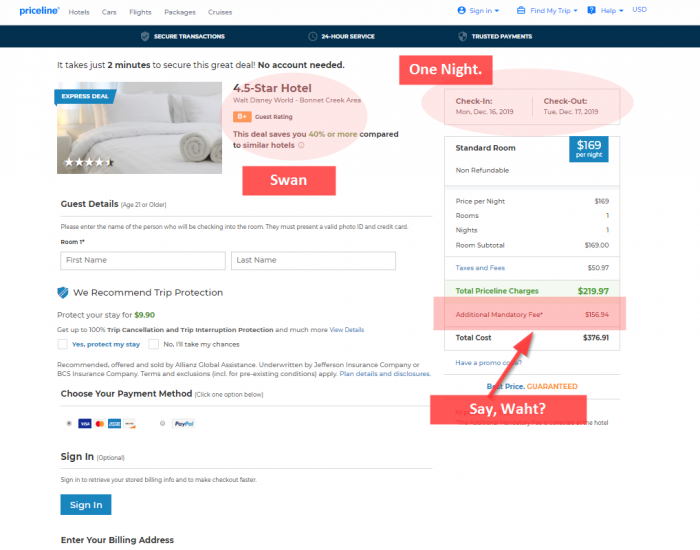 So, after verifying these huge mandatory fees appeared on multiple (but not all) Swan deals, I had to go check the regular Priceline and the Marriott rates on that date. The cheapest room on regular Priceline was a Deluxe King Alcove room for $356.74 including all taxes and fees. (King Alcove is now my least favorite imaginary monarch.) On Marriott’s site, the same room could be booked for $286.88, all in.

Now, again: this seems like a technical glitch to me. I am not a lawyer. I also have never worn a bow tie.

But to me, Priceline’s own terms seem to essentially absolve them of any responsibility when it comes to resort fees. I would personally avoid one of these outlandish fee deals. I also would take the time to take screen captures of any deals I did book, at least to have some reference information if the Fee Police come a knocking when you check in.

Let’s return to happy Christmas feelings: if you’ve been successful at booking any of the terrific All-Star Movies or Animal Kingdom Lodge December deals, let us know in the comments!