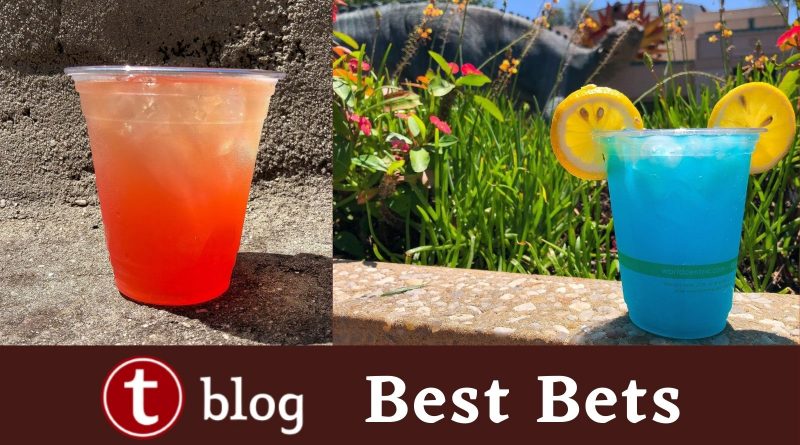 It’s time to raise a glass to Disney’s Animal Kingdom. Later this month this wildly beautiful park will celebrate its 23rd anniversary, on Earth Day. To celebrate Disney released multiple specialty treats, cocktails, and drinks. We’ve tried most of the specialty drinks and we’re here to share with you our hits and misses.

Here’s how our team ranks the specialty drinks available this month at Animal Kingdom:

Is it any surprise that our team’s top pick is made at Nomad Lounge? This lounge is one of the highest ranked bars at Walt Disney World. In fact, based on over 500,000 surveys, our TouringPlans subscribers rank Nomad Lounge as #1 out of 57 Walt Disney World bars and lounges. The Mother Earth Cocktail is made with Cruxland Gin and Infused Tea garnished with Mint and Lemon Peel. Each drink is handcrafted. This botanical-mixed beverage tops our list because it is refreshing and well balanced, perhaps a tad on the tart side. It is available without spirits as well.

Over in Asia, at Thirsty River Bar, next to Expedition Everest, the yeti roars morning and night. The Yeti Sunset Cocktail makes for a pretty picture, and thankfully it tastes great too. Made with Jack Daniels, Strawberry, and Lychee Lemonade, this pink hued drink is on the sweet side. The Lychee Lemonade adds an exotic twist. It easily tops our list, coming in at a close second.

Restaurantosaurus Lounge in Dinoland U.S.A. is where to go if you like your cocktails neon colored. The Crave the Wave Cocktail continues this “legacy” with a neon blue drink thanks to Vodka, Blue Curacao, and Odwalla Lemonade. This drink ranks in the middle for our team. It’s essentially an Electric Lemonade. It’s definitely on the tart side. You’ll easily get some attention from fellow guests when you have this drink in your hand.

The next drinks are big misses for our team. Unless you want super sugary drinks, we recommend you hard pass on them, unless you are looking for colorful drinks for your kids. We’d recommend the Cotton Top Lagoon and Red Crowned Crane from Isle of Java over The Loggerhead.

The Cotton Top Lagoon and Red Crowned Crane drinks are layered slushies topped with cotton candy. The Loggerhead at Flame Tree Barbecue is Sour Apple Syrup, Sprite, Green Sugar-rim, and a Sour Gummy Worm. Ivonne on our team did not enjoy this one at all. A few sips in the name of research and that was enough to convince her to toss it away. The gummy worm disintegrated in the glowing green drink. Perhaps folks with a strong affinity for sour apple will dig it, but we recommend passing by this one.

There are two drinks we haven’t tried just yet: The Kiwi Margarita at Satu’li Canteen, and the Lion’s Fury at Dawa Bar. If you’ve had a chance to try them we’d love to know how you liked either one.

Which of these specialty drinks sounds the best to you? Let us know in the comments!