This week’s SATURDAY SIX takes a look at theme park news via MEMES! With all the latest news being dropped by Disney and Universal, theme park social media is on FIRE. So much so that we’re already going back to the well with a look at recent theme park memes. For a refresher on previous meme articles check out Volumes 1, 2, 3, and 4. If you’re wondering “what in the world is a meme?,” then you’re probably too old to read this particular edition of the SAT 6 and instead should check out Traveling With Seniors: Before You Go. Everyone else, let’s hit the ground running by starting with…

Just days after Bob Iger told Disney shareholders that Disney wouldn’t need to do any marketing for Star Wars: Galaxy’s Edge, Disney began a full fledged marketing campaign for Star Wars: Galaxy’s Edge. This included bringing in various journalists for behind-the-scenes tours, dropping a whole bunch of new information on the land’s food and merchandise, and  – most importantly – announcing that Galaxy’s Edge would be opening in Disneyland on May 31 and in Walt Disney World on August 29. The WDW date was especially shocking since it was months before even the most optimistic guess would have had the opening date.

HOWEVER, there was a small caveat to the news. The heavily anticipated Rise of the Resistance attraction will NOT be opening with the land in either California or Florida. This announcement brought with it a fair share of reaction on Twitter and Facebook, including some fun ones…

Despite the land not being “fully operational” (credit Emperor Palpatine) most agree that people should probably get in line TODAY for the land because of the anticipated crowds.

We’ll close our look at Galaxy’s Edge memes with this one which looks at one of the many similarities between Universal’s Wizarding World and Disney’s new Star Wars Land.

In the last month, one of the memes which caught fire on Twitter was one that featured a “summoning circle.” Using candle emojis, Twitter users created their own protective circles featuring humorous elements. For the theme park community, we got one featuring a well known line from the Haunted Mansion… 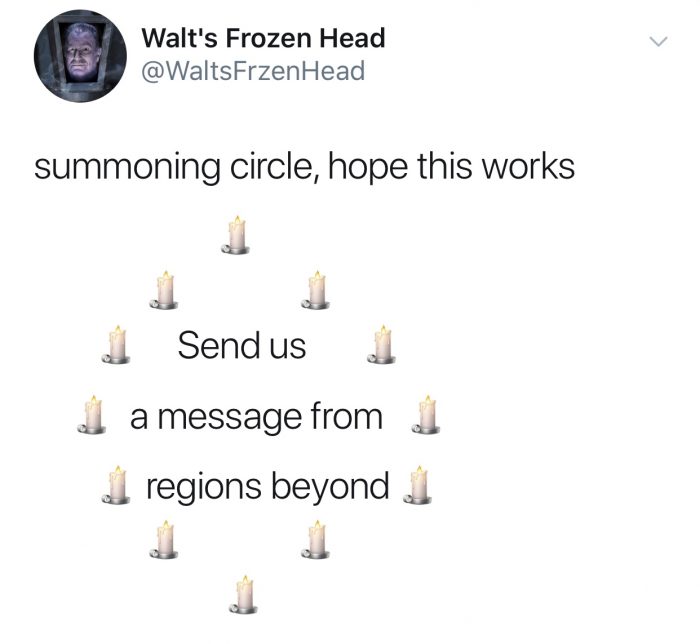 Drunk@Disney did his best to bring into existence a rooftop bar at Disney’s new Rivera Resort. This would be a must for anyone who has been to Bar 17 Bistro at Universal’s Aventura Hotel. 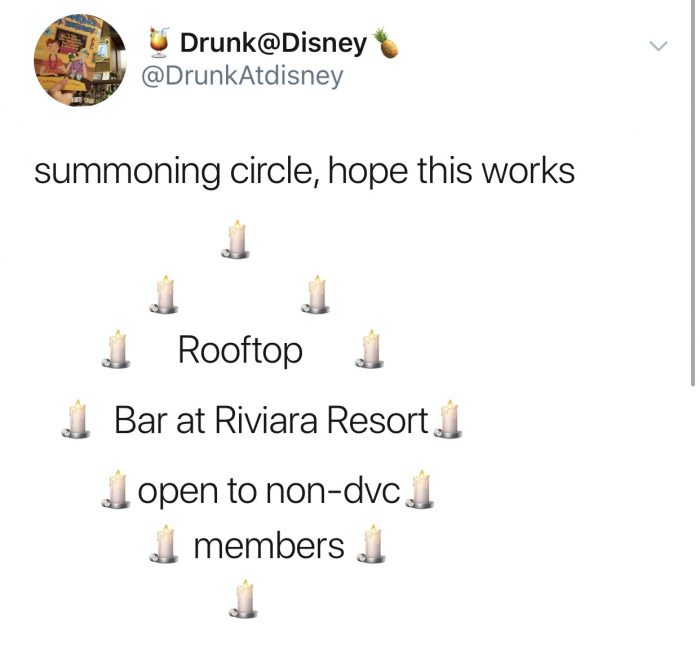 Speaking of Universal, their social media teams on both coasts added their thoughts… 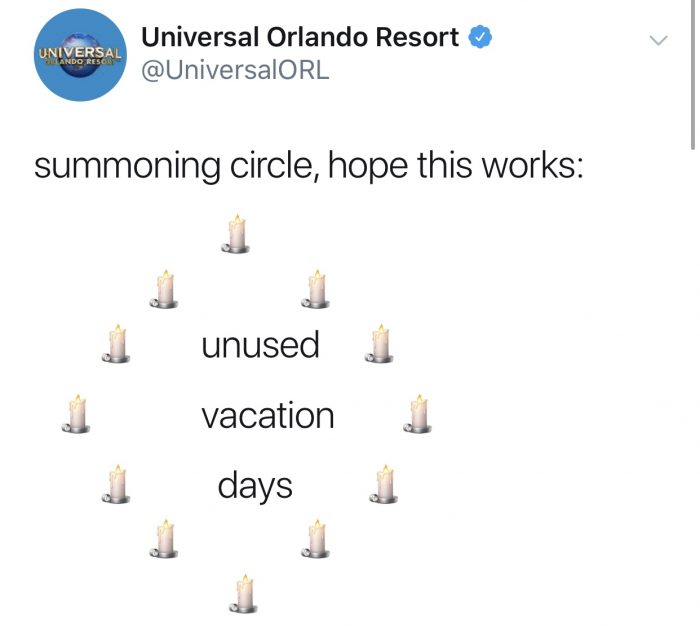 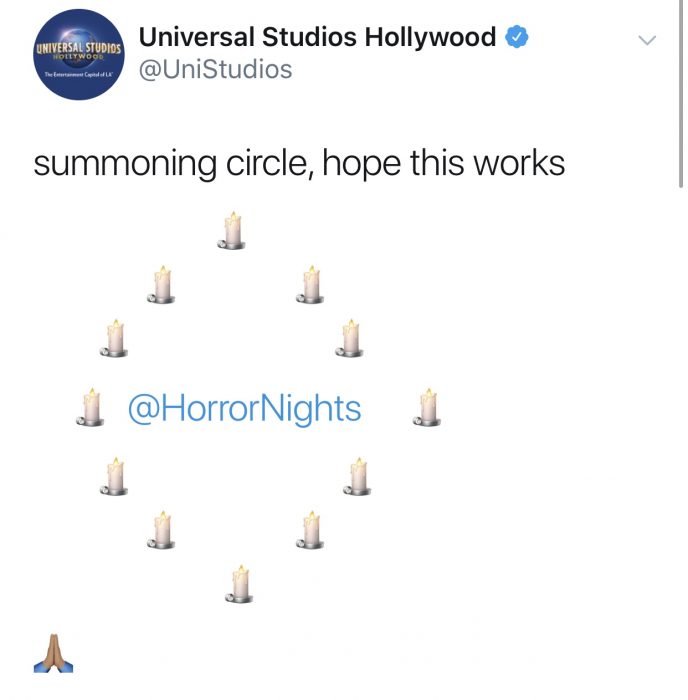 Back in late February, Universal finally announced the official name and opening date for Hagrid’s Magical Creatures Motorbike Adventure in Islands of Adventure. Just minutes after Universal sent out its press release to the media, Disney countered with the news of major changes coming to Epcot, including moving the Leave a Legacy monoliths from the front of the park (something we here at the SATURDAY SIX personally volunteered to take to the Disney Dump). This was a game of one-upmanship we don’t often see in the theme park world. While we fans often see the theme park world as being Disney versus Universal, the people working at these companies generally don’t feel the same way. In areas such as marketing, IT, or even Imagineering/Universal Creative, employees often go between the two companies and both know what the other company is planning on doing. We can reasonably assume that Disney “knew” Universal was going to make their coaster announcement and as soon it was official, green lit their Epcot announcement as a way to steal away some thunder.

Personally? I love it. The “theme park wars” that we’ve all wanted is finally here, and ultimately the winners will be the guests to both resorts. 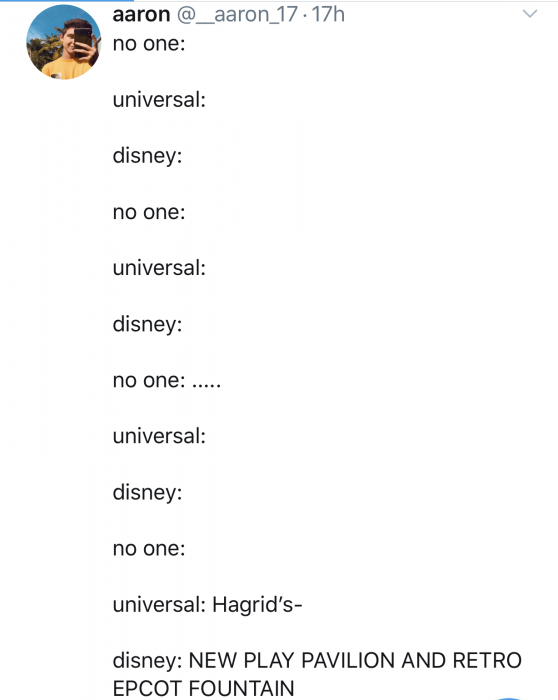 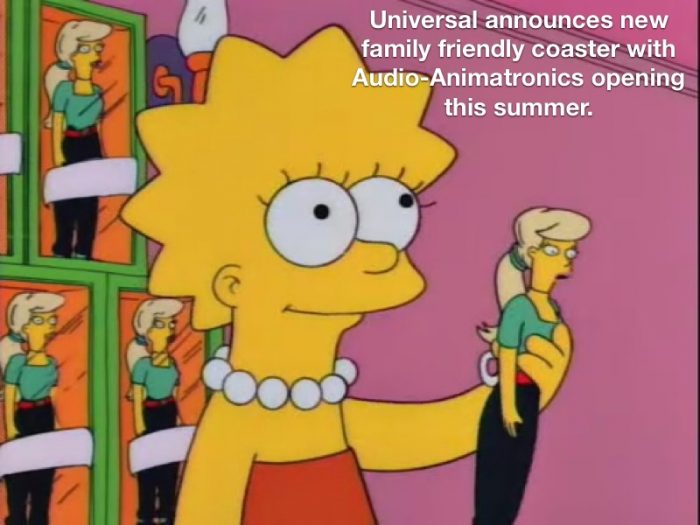 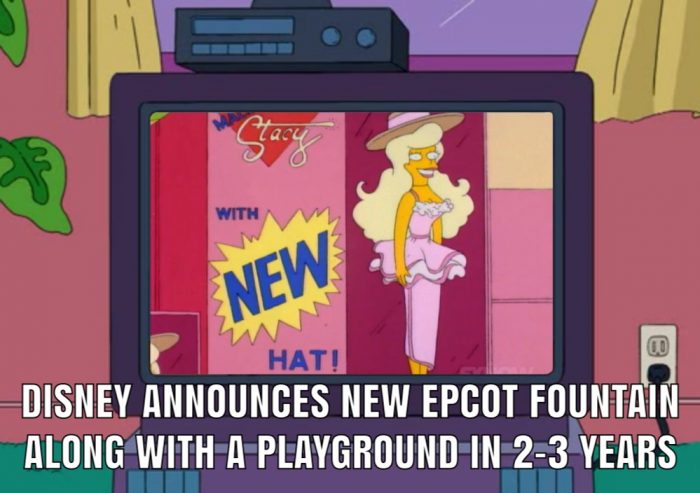 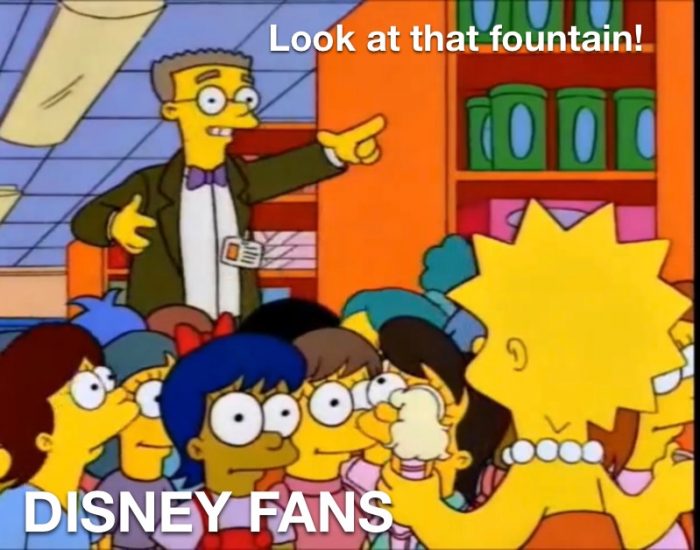 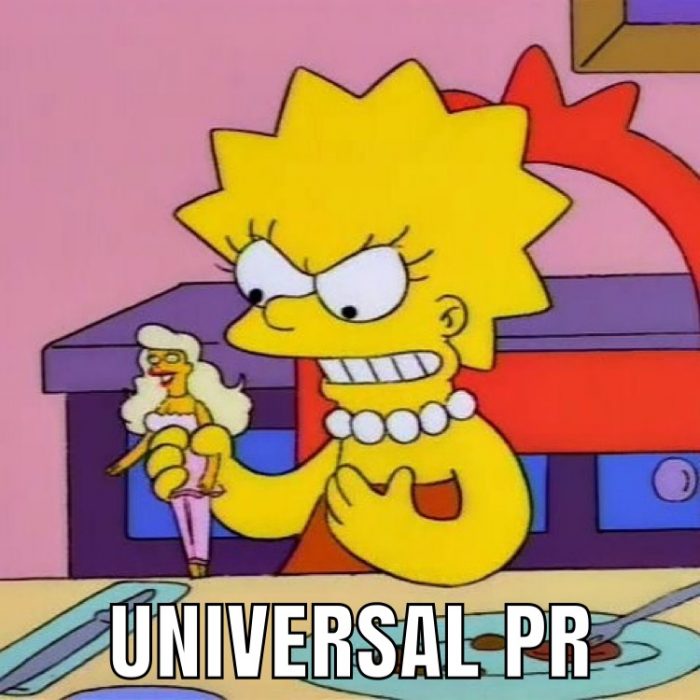 Not that we needed the confirmation, but that Epcot announcement we mentioned above cements the fact that Disney wants to put IPs in every square inch of the parks they can. While the original vision of EPCOT Center had a mandate of no traditional Disney characters, the years since have brought in a whole bunch of them. In fact, not only are all the attractions currently being built in the park based around IPs, but the new nighttime show replacing IllumiNations will feature Disney characters, and the play pavilion replacing Wonders of Life has various Disney IPs attached including  Inside Out, The Incredibles, and The Aristocats.

With the amount of characters being shoehorned into every possible inch of current day Epcot, one can imagine what a current pitch meeting looks like at the park…

“That’s why you got the corner office Johnson. Great job!”

Twitter user @WaltsFrzenHead used a memorable moment from this year’s Oscars to describe the newfound attraction to IPs inside the theme parks.

Meanwhile @DisneyDan used an iconic moment from Raiders of the Lost Ark to summarize Disney’s feelings on original creative content in the parks.

We always cry at weddings.

If you are on any sort of social media, you are almost guaranteed TO run across viral photos of a meeting between Goofy and Minnie Mouse from several years ago. Thankfully, this year we got a new twist featuring Goofy, Daisy Duck, and Donald Duck.

On a trip to EPCOT, Twitter user @Hastin discovered a sign trying to herd guests Temple Grandin-style through Mouse Gear as they exited the park. Disney was not technically “forcing” guests to leave through a gift shop, but it is probably safe to assume that Disney was counting on many guests thinking that was the way they were “supposed” to go. Certainly nothing nefarious, but also something you would expect to see at a place like Six Flags and not a Disney park.

Dis Twitter meme machine @SuperWeenieHtJr had fun with this concept, combining Spaceship Earth with the World of Disney store at Disney Speaks. (Weenie, please don’t give them any ideas…) 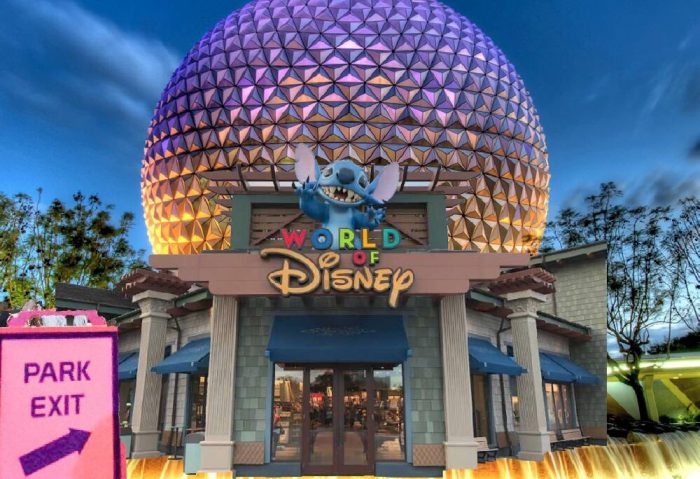 Meanwhile, over at Universal, the sign was used to encourage guests to ride an attraction many are passing on…. 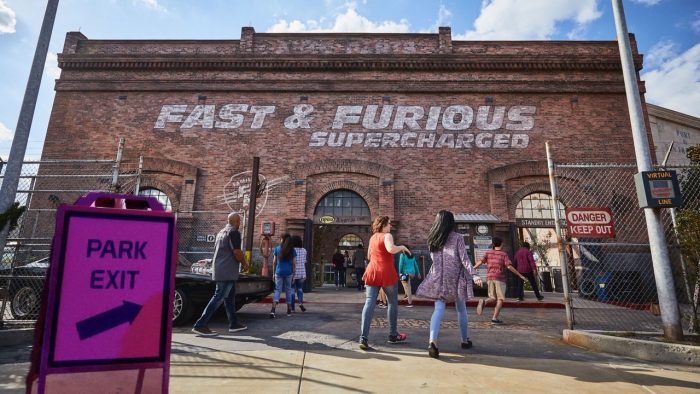 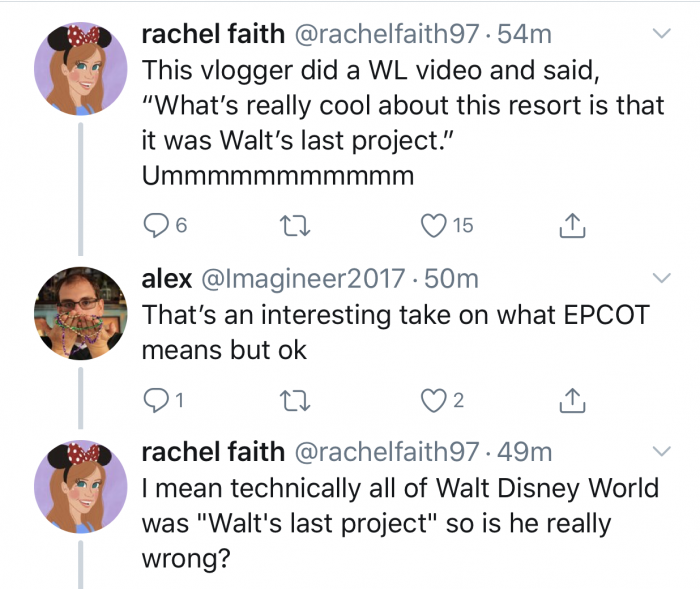 So there you have it: The SATURDAY SIX Looks at Theme Park News via MEMES! See you next weekend for the latest installment of the SATURDAY SIX, where we’ll look at something fun from the world of Disney and Universal. If you enjoyed yourself, be sure to check out The Magic, The Memories, and Merch! articles, or, for your listening pleasure, check out the E-Ticket Report podcast. You can also follow Your Humble Author on Twitter (@derekburgan).

Special Thanks to The Elite Brandon Glover, Captain Cruiseline Scott Sanders of the world famous Disney Cruise Line Blog, my personal protege Hunter “Elvey” Underwood, the bio-est of all reconstructs @bioreconstruct, Mr. ‘Ohana Tim Grassey, the SAT SIX Fun Squad of Parkscope Joe and Nick, and Hermione Granger’s tutor Megan Stump for their invaluable assistance with this article. The SAT SIX is inspired each week by goofballs Aengus Mackenzie and LitemAndHyde and you Potterheads will  enjoy Meg’s other blog work over at the Central Florida Slug Club. 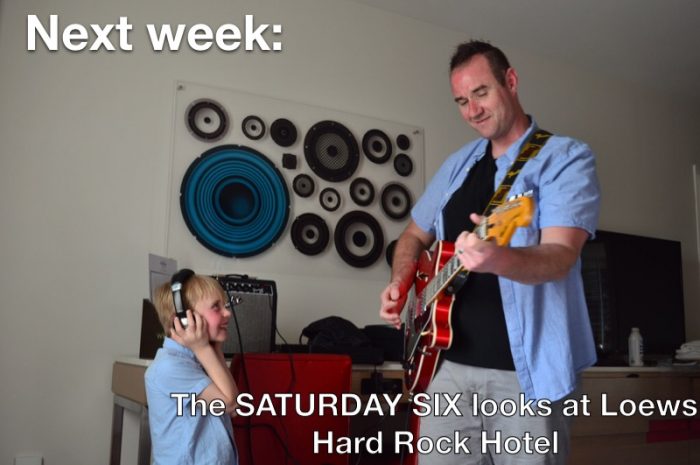 2 thoughts on “The SATURDAY SIX Looks at Theme Park News via MEMES (Vol. 5)”