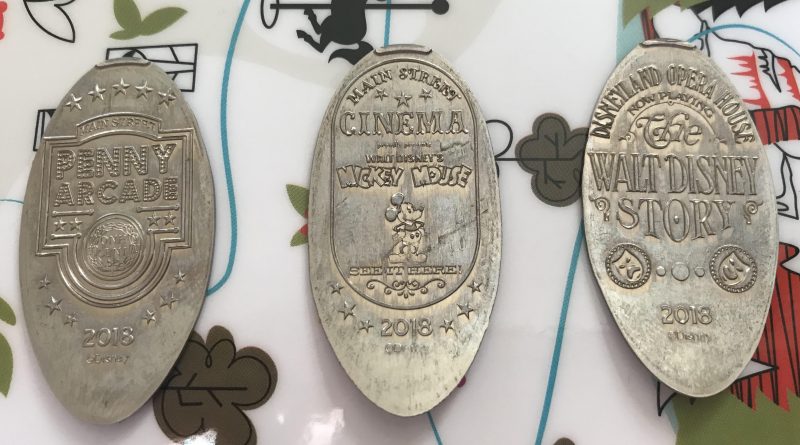 This week’s SATURDAY SIX takes a look at Pressed Pennies at DISNEYLAND! Regular readers of the SAT SIX know how much we love our pressed pennies and why we consider them one of the BEST souvenirs you can get at the theme parks. We’ve done dedicated articles on our favorite pressed pennies at Walt Disney World and at the Universal Orlando Resort. This week we’re going across the country and checking out the pressed penny situation at DISNEYLAND and see how it stacks up against its Florida counterparts. To help us out, we consulted with Disney Outlet Store Photo Report West Coast contributor Christela McC along with TouringPlans’ own Disneyland guru Guy Selga to figure out the best of the best. Let’s kick off the countdown with…

# 6 – Pirates of the Caribbean

Located in the Pieces of Eight gift shop,  this machine is tucked away in a hidden back corner and is designed to look like a treasure chest. Right away Disneyland is showing us something with themed pressed penny machines. We have a lot of machines in Florida, but almost all of them are completely generic. A pressed penny machine at the Coronado Beach Resort could be switched out for one inside Harambe at Animal Kingdom or Fantastyland in the Magic Kingdom and no one would know the difference.

The penny designs on this machine are E-Ticket. Fantastic stuff.

Believe it or not, that’s not all. Here are the three penny designs when pressed. But above them you can see a FOURTH design with the Pirates of the Caribbean logo. That is actually on the back of the pennies. That’s right, they are DOUBLE PRESSED.

If this article were a TV show, this is where we would have a *record scratch* sound effect and a freeze frame effect. You would then hear me –  Your Humble Author – in a voiceover…

“You may be wondering how we got here. Collecting pressed pennies for years. Thought I had seen it all. Thought I knew it all. And then Disneyland drops an anvil on my head with the concept of a pressed penny with both sides pressed. To say I’ve questioned everything about my very existence is just the beginning of the story…”

Tomorrowland has a pair of solid machines located at the Little Green Men Store Command. One machine is dedicated to classic Tomorrowland while the other is for Buzz Lightyear Astro Blasters. The designs at BOTH machines also have their own stamp on the back side.

These Tomorrowland designs are wonderful.

Here are the designs for the Buzz Lightyear Astro Blasters machine. By themselves, this wouldn’t make any list, but it gets better…

The placement of the aliens here is perfect.

The back stamp including the Buzz Lightyear Astro Blaster logo is E-Ticket as well.

Located in Port Royal Curios and Curiosities, here we have a pressed penny machine shaped like a coffin. A COFFIN. To quote Dirk Nowitzki, “Shut it dooooooooooooooooown!” Just as the Haunted Mansion attraction has a seasonal overlay with Haunted Mansion Holiday, the designs offered on the machine during that time are themed to A Nightmare Before Christmas. That’s right, Disneyland has seasonal pressed coins. Keep in mind that in Florida we have a machine at the Animal Kingdom that still has a design for the Jammin’ Jungle Parade, which ended in 2014 as Disney started to prepare for Pandora: The World of Avatar.

ALSO: Notice in Disneyland to get a pressed quarter it costs 4 quarters, one of which is used for the pressed coin. In Walt Disney World pressed quarters cost FIVE QUARTERS! #BeFairToFlorida

Oh, and these ALSO have a back stamp.

Here’s some examples of the coin designs outside of Haunted Mansion Holiday season.

The back stamp of the Haunted Mansion coins feature all three Hitchhiking Ghosts. This is insane!!

Oh, it gets even better.

There was a special series of pressed coin designs made for the 50th anniversary of the attraction!

The design in the middle is the backstamp for all three of the quarter options.

Located near the exit of Great Moments with Mr. Lincoln, this machine is understated compared to many on this list but it makes up for that in several other ways. First of all, pressing a nickel is pretty impressive because it sounds like the machine is going to jam every time it goes through. Secondly, pressed nickels anywhere are one of the rarest of all birds in the pressed coin world. To top it all off, the actual coin designs are classic, especially for hardcore Disney fans. Seriously, this is some grade-A quality penny art, but it is a little strange that they did a Main Street Penny Arcade coin as a nickel instead of – well, you know, a penny.

Just to rub it in, of course there’s a back stamp with the awesome Main Street USA logo.

It would take a special machine to beat a pressed nickel machine with those type of designs, but here with are with a machine that  features a coin release modeled like the final drop in Splash Mountain. This is next level bananas.

PRO TIP: This machine can be easy to miss as it’s located in a dark tunnel as people are walking out and seeing how soaked they just got on the ride.

I can hear you out there. “Derek, you just showed us a pressed penny machine that recreates a guest going down Splash Mountain complete with a miniature model of attraction. There is NO WAY Disneyland has a better machine than that!!”

Allow me to introduce you to Rajah’s Mint, the greatest pressed penny machine in theme park history. Located in  the Adventureland Bazaar – pound for pound one of theme park’s best gift shops –  this large structure has 3 pressed penny machines built into it. You read that right, THREE.  The various machines are themed to Jungle Cruise, Indiana Jones and Moana. That’s a murderer’s row of IPs. This machine surprises many unsuspecting guests, as the elephant at the top makes a stamping motion and noise as a coin is pressed.

One thing I noticed during the recent World of Disney makeover in Disney Springs was how much Moana merchandise is available, but especially for Pua, the pig. In pro-wrestling parlance, Pua the pig is over.

The Adventureland back stamp is like a shiv to the back to us WDW pressed penny fans. Not only do those spoiled brats cherished Disneyland guests get a machine like no other, they also get an awesome Adventureland logo on the back of their coins. Oh wait, there’s TWO DIFFERENT ADVENTURELAND BACK STAMPS?!!!!!!!!!!!!!!!!!!

Pressed dimes are something pretty unique in the theme park pressed coin universe, so its neat to see some used for Toontown.

BE FAIR TO FLORIDA!!!

So there you have it: A Look at Disneyland Pressed Pennies! See you next weekend for the latest installment of the SATURDAY SIX, where we’ll look at something fun from the world of Disney and Universal. If you enjoyed yourself, be sure to check out The Magic, The Memories, and Merch! articles, or, for your listening pleasure, check out the E-Ticket Report podcast. You can also follow Your Humble Author on Twitter (@derekburgan).

The 6 Best Pressed Pennies at the UNIVERSAL ORLANDO RESORT

A Look at Pressed Pennies at WALT DISNEY WORLD

6 Pieces of Disney Merchandise We Really Want To See

Special Thanks to The Elite Brandon Glover, Captain Cruiseline Scott Sanders of the world famous Disney Cruise Line Blog, California Dreamin’ @ChristelaMcC,  the SAT SIX Fun Squad of Parkscope Joe and Nick, and Hermione Granger’s tutor Megan Stump for their invaluable assistance with this article. The SAT SIX is inspired each week by goofballs Aengus Mackenzie and LitemAndHyde and you Potterheads will  enjoy Meg’s other blog work over at the Central Florida Slug Club. 8 thoughts on “SATURDAY SIX: A Look at DISNEYLAND Pressed Coins (and why they are so much better than Walt Disney World)”