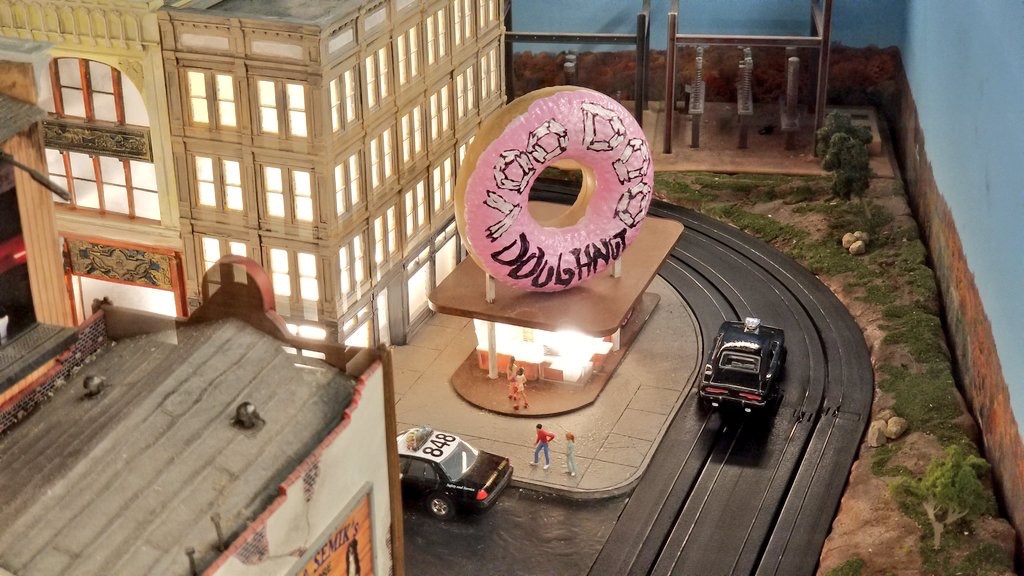 This week’s SATURDAY SIX takes a look at 6  Easter Eggs in the Fast & Furious – Supercharged queue! Everyone reading this is a fan of theme park attractions, and until recently everything that came before and after the actual ride were a “necessary evil” that we all lived with in order to enjoy the attraction. We toiled away waiting in boring lines to start, and we were herded through gift shops on our way out.

However, over the past several years both Universal and Disney have started to make the attraction queues and gift shops a vital part of the overall attraction package. With Avatar Flight of Passage at Disney and the recent Skull Island: Reign of Kong and Race Through New York Starring Jimmy Fallon at Universal, the attraction queues are as good as the ride itself. In fact, guests would be doing themselves a disservice not experiencing them.

With the opening of Fast & Furious – Supercharged at Universal Studios Florida, guests were once again given a queue that they can look forward to spending some time in, rather than dreading it. Aside from the collection of exotic vehicles and appearances by stars of the Fast & Furious franchise, there’s also a ton of Easter Eggs throughout. Some for the F&F family, and others for the theme park fans. Today we’re going to look at some of our favorites, starting with…

To say early reaction to the actual Supercharged ride has been mixed would be an understatement. Several theme park insiders, including Seth Kubersky, author of the Unofficial Guide to Universal Orlando, have been less than kind with their review. In the queue there was a poster with the “Contractor’s Pyramid,” which many thought might have been a way for Universal Creative to show they also thought the ride could have been something more. However, the poster was actually a callback to the very first Fast & Furious film made in 2001 (The Fast and The Furious.)

*Note the use of past tense in the description of this poster, that’s because it has already been removed (though we hope that was just temporary.)

Both Supercharged and CityWalk’s Voodoo Doughnut had their Grand Opening relatively close to each other, so it was a nice surprise to see a reference to the in-demand donut shop at the child swap room in the attraction. Many of Universal’s child swap rooms play movies (Harry Potter) or cartoons (Transformers) for the smaller kids to enjoy while the rest of the family rides, but Supercharged has an interactive racing game.

The single rider line offers guests the next great collection of Easter Eggs with a trophy case on the wall containing a collection of vehicle keys and titles. If you look closely, you’ll see several references to other fictional characters, including Doc Brown and his Delorean from Back to the Future and a certain red headed character from the Wizarding World who drove a Flying Ford Anglia…

One thing we absolutely love is when both Universal and Disney put in nods to older attractions inside the rides that replaced them. Some of our favorites includes the 20,000 Leagues submarine in the queue for the Little Mermaid ride at Disney’s Magic Kingdom, or the aforementioned Doc Brown and his Delorean in the preshow for The Simpsons Ride.

Before Fast & Furious – Supercharged, two attractions operated in the same space. Earthquake: The Big One, was an opening day attraction back in 1990 and ran in several incarnations until 2007. In 2008, Earthquake was officially replaced by Disaster!: A Major Motion Picture Ride…Starring You! There are several references to these attractions in the Supercharged queue, including some power boxes which refer to all three attractions and the dates they opened (or in Supercharged case, seemingly expected to open.)

Another attraction that was displaced by Supercharged was Beetlejuice Graveyard Revue. In the queue you’ll see several references to Beetlejuice himself, including a figurine.

Its certainly appropriate for an attraction based on fast cars to feature references to possibly the most famous car in Hollywood history. Not only did we have Doc Brown’s keychain and title in the trophy case, but eagle eyes will also notice an iconic license plate as well.

These Easter Eggs are for the true Universal fanboys, and shout out specific Universal Team Members. There are probably dozens of references throughout the attraction.

So there you have it: Six Easter Eggs in the Fast & Furious – Supercharged Queue! See you next weekend for the latest installment of the SATURDAY SIX, where we’ll look at something fun from the world of Disney and Universal. If you enjoyed yourself, be sure to check out The Magic, The Memories, and Merch! articles, or, for your listening pleasure, check out the E-Ticket Report podcast. You can also follow Your Humble Author on Twitter (@derekburgan).

Special Thanks to our spirit animal Brandon Glover, the mistress of merchandise @HedgehgosCorner (be sure to contact her for ANY piece of Universal merchandise at Hedgehogscorner.com), the SAT SIX Fun Squad of Parkscope Joe and Nick, and blogger to the stars Megan Stump for their invaluable assistance with this article. Be sure to also check out Brandon on The Park Blogger podcast with goofballs co-hosts Aengus Mackenzie and LitemAndHyde , while fellow Potterheads may enjoy Meg’s work on the Central Florida Slug Club.