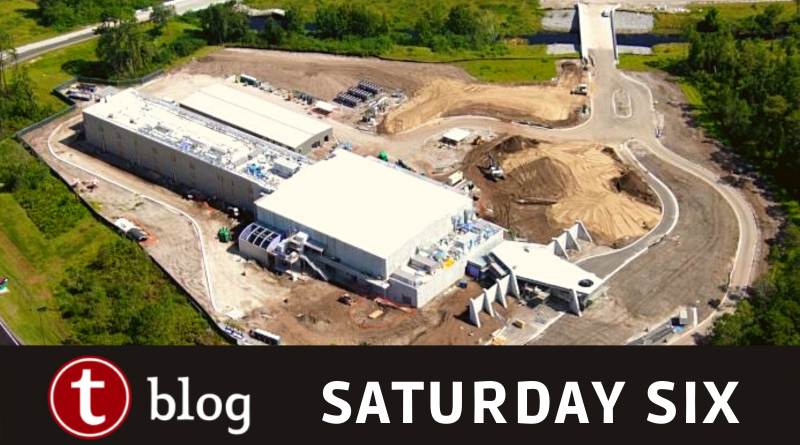 This week’s SATURDAY SIX takes a look at the past week in theme park NEWS! Every week seems impossible to top, but between both Universal and Disney we’ve had some doozies recently. Today we’re going to look at The Good, The Bad, and – especially – The Ugly which happened during the last week or so, starting with…

“Where no man has gone before…”  – Captain James T. Kirk, possibly referring to opening of Galaxy’s Edge in Disneyland

When news concerning the theme parks goes viral, it’s almost never a good thing. Whether it’s a guest concealing guns in their diaper bag, a family fighting in Disneyland, or why Splash Mountain needs to be re-themed, if your friends and family are seeing a theme park story on Facebook and ask you about it, generally your response will begin with “Yeah, but…” This past week showed why the non-hard core theme park fans in your life don’t know what they are talking about, and it’s not their fault!

In last week’s edition of this fine blog series, we talked about a lightning storm that ended up causing operational issues for Disney’s (possibly cursed) Rise of the Resistance attraction. This week the “regular folk” saw the same footage and wrote up their articles. Unfortunately, one of the main articles covering this amazing lightning strike mentioned it hit the “Rise of Resistance” attraction at “Galaxy’s Edge Arena” in Disney’s new “Star Trek Land.” Filled with basic errors, the article went everywhere, and was shared on a whole bunch of websites. 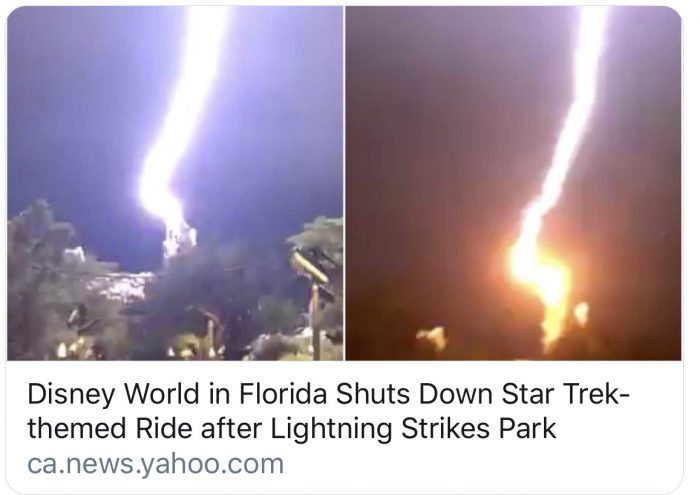 As theme park fans, stories like this have to make you wonder how much the news gets wrong on stuff we don’t know a lot about.

So anyway, there was this cute story of an Osprey making a nest atop the highest point in the roller coaster being built at Jurassic Park in Islands of Adventure. Universal got rid of the nest overnight, and that was going to be the end of the story, right?

This week a second Osprey was seen atop the coaster and a new nest  started to get built!

Naturally, Universal had to do some important tightening of screws in this very same area, so it was time to remove the second nest.

A recently furloughed contractor even offered to help. In the end, the second nest was completely removed.

Okay, so THAT’s the end of the story….right?

A third nest was under construction as of last night! 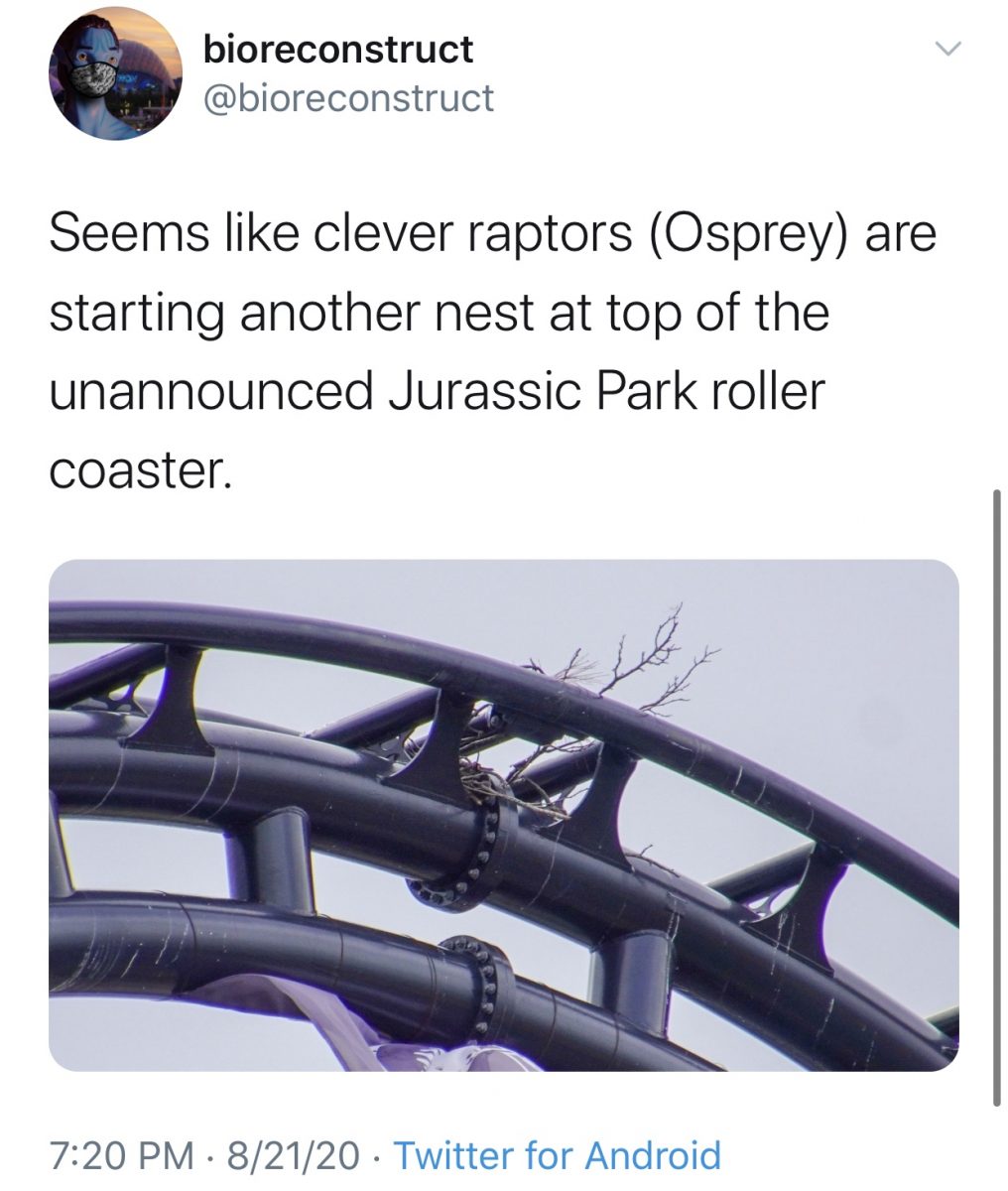 Somewhere the ghost of Alfred Hitchcock is smiling, because this isn’t the only theme park attraction that birds have been taking over. Over at Sea World, several of our fine feathered friends were seen atop their new coaster, Ice Breaker.

When Walt Disney World re-opened in July after being closed for months, the company’s disagreement with a Cast Member equity union kept many performers out of the parks. From the Dapper Dans, to the Festival of the Lion King performers, to the cast of Beauty & the Beast: Live on Stage, there are a lot of highly trained Cast Members that are part of this union. One of the main sticking points for the union was addressing the issue of safety for the performers. To help address the safety issue, this week Disney opened up a Covid testing center on-site at WDW, with testing available for both Cast Members and Florida residents.

For me personally, while it’s great being able to get on rides with little to no wait, a large part of the “magic” of visiting theme parks is gone right now. In many ways, equity performers are the heart of Disney theme parks in how they can connect with guests in ways almost no other Cast Member can. For example, I can build my own lightsaber in a gift shop with Cast Members nearby giving me tips, but the equity actor working at Savi’s Workshop in Batuu makes the experience something I’ll remember for years, and will tell all my friends and family about.

# 3 – Our Long National Nightmare Is (Almost) Over

If I had a “wish list” of things I would ask for at Walt Disney World, for years one of the wishes would have been a walkway from the Magic Kingdom to the Grand Floridian. There is nothing more soul breaking than after a day spent at the Magic Kingdom, to walk out and see giant lines for the monorail, ferry boats, and busses. Thankfully that dream is about to be fulfilled, exactly at the time we don’t need it. That’s okay though, eventually we will and Disney is getting ever so close to finishing up work on a walkway from the Magic Kingdom to the Grand Flo that includes two new bridges for guests to use. The bridge closer to the hotel is a stationary bridge, while the one closer to Magic Kingdom can pivot to allow access for water craft into Seven Seas Lagoon.

You can see in the photo below that the larger bridge has been pivoted to allow watercraft – like the Electrical Water Pageant and the Liberty Belle steam boat – to enter the watercraft service area.

This aerial view gives better detail of the pivoted bridge, along with the Eletrical Water Pageant on the left.

Now that we got the walkway, maybe it’s time to update our wish list for Disney:

The Cove hotel, part of the Disney’s Swan and Dolphin complex, is one of the few projects at WDW that kept chugging along even after the coronavirus shut down. The Cove is located across the street from the Swan & Dolphin, and is right next to the Fantasia Gardens mini-golf course. (Small reminder that Disney itself is basically just a landlord for these three hotels as the Swan, Dolphin, and Cove are owned by Tishman Realty and operated by Marriott).

One noticeable difference is how “boring” The Cove looks compared to Michael Graves’ over-the-top design elements in the nearby Swan and Dolphin.

The upper floors of The Cove will possibly have some amazing views of the EPCOT nighttime spectacular, once that returns.

Speaking of hotels still pushing forward with construction, although at seemingly a glacier pace compared to the Cove – here’s the latest look at the Star Wars themed Galactic Starcruiser hotel.

On the other end of the spectrum was the news coming out of the Universal Orlando Resort, as yesterday was the last operating day for Sapphire Falls and Aventura Hotel. Guests with reservations at these hotels have been given complimentary upgrades to the Hard Rock Hotel or Royal Pacific Resort.  So for closed onsite resorts, Sapphire Falls and Aventura join Portofino Bay (which never re-opened after its Covid related shut down) and Dockside Inn & Suites (which never opened, and was going to have its official Grand Opening the week Universal shut everything down back in March). Believe it or not, even with all these hotels being closed, Universal still technically have more rooms available than it did back in 2013, which shows just how much work they have put into this area of the resort.

The hotels are expected to be closed at least until December 31, 2020.

With all the things going on this summer, theme park fans needed a win and EPCOT gave it to us by installing a gorgeous set of prism pylons at the base of Spaceship Earth, each with the original EPCOT Center logo. Spend enough time reading online forums or on social media and you’re invariably hear about how “EPCOT was better back when…” and many times you have to take it with a grain of salt. However, you can’t deny the effect that EPCOT had on a generation of theme park fans, as it was like no other theme park ever built (before or since.) While minor, this new fountain in front of Spaceship Earth, with the prism pylons pointing towards the sky, gives you a small taste of what it was like to walk into EPCOT years ago. A time when you could be filled with a sense of hope and wonder.

“The Epcot Center logo symbolizes unity, fellowship, and harmony around the world. Five outer rings are linked to form the shape of a flower–a celebration of life. The heart of the logo is the Earth, embraced by a star symbolizing hope–the hope that with imagination, commitment, and dedication, we can create a better tomorrow.” – Disney Legend Marty Sklar

There are times when anything theme park related on Facebook is an actual nightmare. You begin to lose all hope in humanity when following just about any Disney or Universal related group. However, the suffering is all worth it because every once in a while a post comes along that is a, well, “chef’s kiss.”

To wit, the following post was made on a popular Disney related website. In it, the original poster is asking for tips to fix a “Mickey” silhouette they created on their wall. What’s unbelievable to start is that the actual silhouette was made out of smaller Mickey heads, showing the home owner exactly what they need to do to fix the problem. HOWEVER, the replies to the post had even better ideas…

Want to really make it better? Get rid of it.

Another reply pointed out that – from a different perspective – the Mickey head looks like someone screaming. In a meta way, that may actual be us looking at the original artwork on the wall.

Another poster pointed out how the silhouette is perfect, for Arthur.

But my favorite is the person who replied with this Mickey….

So there you have it: The SATURDAY SIX Looks Back At The Week That Was! See you next weekend for the latest installment of the SATURDAY SIX, where we’ll look at something fun from the world of Disney and Universal. If you enjoyed yourself, be sure to check out The Magic, The Memories, and Merch! articles covering the latest from the Disney Outlet Stores. You can also follow Your Humble Author on Twitter (@derekburgan). 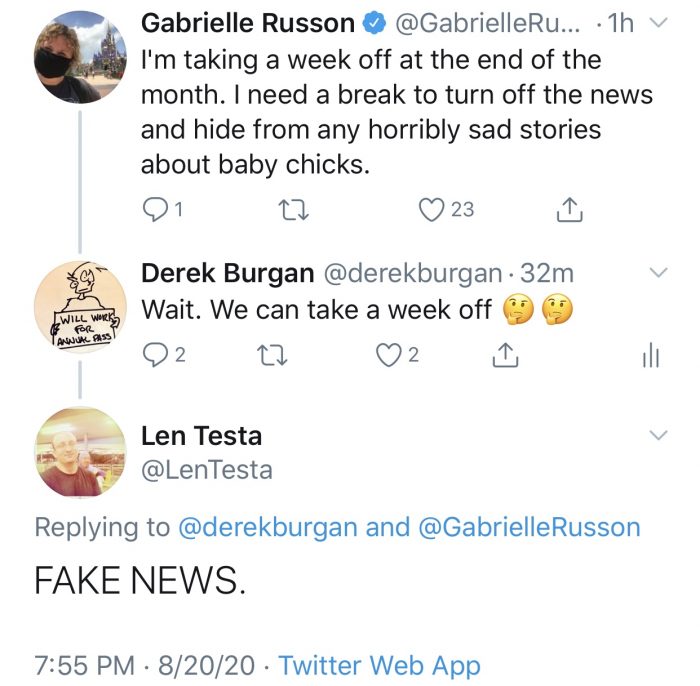