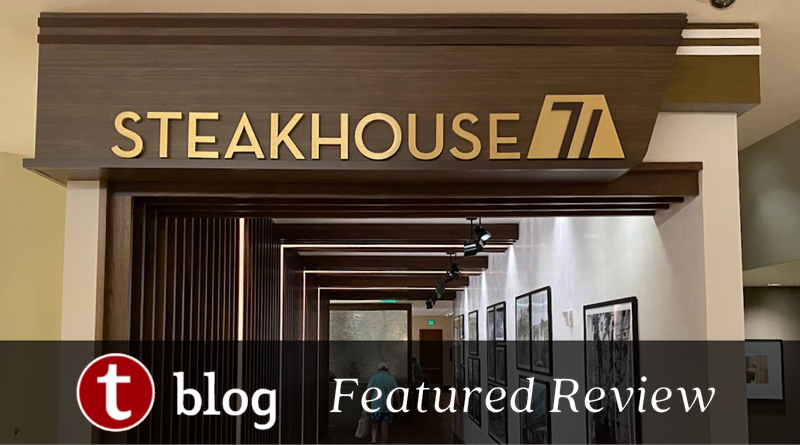 Steakhouse 71 is a restaurant on the 1st floor of Disney’s Contemporary Resort. The cuisine is American, and the restaurant serves breakfast, lunch, and dinner. Each meal period has significant differences in the menu. For lunch, appetizers range from $9-$16, entrees from $16-$26, and desserts from $8-$11. A full three-course meal will run about $40-$50, not including drinks or gratuities.

Reservations are accepted and may be available the same week. But Steakhouse 71 is a relatively new restaurant (it replaced the Wave in the same location), and there’s no guarantee. If you’ve got your sights set on a meal here, it’s best to reserve well in advance. Steakhouse 71 is casual dining; feel free to appear in whatever you’re wearing to the parks.

The Chopped Salad was really terrific. I am a big fan of the modern trend of salads that include dried fruit, nuts or seeds, and cheese in addition to vegetables. Having the components cut to a consistent size made it easy to get lots of flavors in each bite. This was a very large salad and could have easily stood on its own for the meal.

The Fork & Knife Caesar salad has the same number of ingredients as the one you’ll find at your family chain restaurant. What raised this dish to the next level was the quality of the dressing, which was excellent. Creamy and tangy, without the unpleasant acid note that a lot of commercial Caesar dressings have.

The crumb coating on the Onion Rings was crunchy and the rings themselves were cooked through – but not so much that you couldn’t bite through them cleanly, instead of having the whole onion pull out of the coating on the first bite.

The Bacon & Eggs was exactly as advertised. A beautiful piece of pork belly, seared crispy on the outside but tender on the inside. A perfectly cooked egg, with the yolk still runny and the whites not runny at all. And cheesy grits, with a hint of smoke so faint that you’d never identify it without looking at the menu.

The crab cakes were fine. There are two things to get right with a crab cake: the texture and the seasoning. These held together well, not falling apart as lump crab cakes sometimes can. And they had a nicely balanced flavor – you could taste the crab, but it definitely wasn’t the only thing you could taste.

The Stackburger was interesting. The people in our group who don’t like cheeseburgers liked it. The people who do like cheeseburgers thought it was nothing special and had too much bread for the amount of burger and cheese. We ordered the fries (as we actually did with everything), and they were very nice – crispy, just a bit salty, and not too greasy.

This was the best of the mains for us. The steak was cooked to the temperature we ordered, and the exterior was seasoned just enough to enhance the flavor of the meat. I wouldn’t hesitate to order this again.

The Prime Rib Sandwich reminded me of a really good cheesesteak. Usually those are made with ribeye or top sirloin, but the prime rib here could give those cuts a run for their money. My complaint – and it isn’t something that would stop me from ordering this again – is that in addition to the aioli and the cheese, the baguette appeared to have been brushed with oil. It was an extra touch of grease that just really didn’t need to be there.

This was a very nice sandwich. But for the most part what we tasted was cheese, and the flavors of the other components such as the pork belly and the onions were hard to pick out. It wasn’t such a vanilla grilled cheese that I’d say it was safe for a picky palate, but it wasn’t a standout dish for us. And like the Prime Rib Sandwich, it felt a bit greasier than it needed to be.

The Chocolate Cake is big. If you’re not planning on sharing this, and especially if you’re feeling pretty full after one of the heavier sandwiches, be prepared to take most of this home. The good news is that it’s worth saving – moist, dense, semi-sweet chocolate cake with enough frosting between the layers to keep it from feeling too dry.

The Ambrosia didn’t impress us. The flavors were vibrant and light but we found the chiffon cake on the dry side, and the other components couldn’t overcome that.

The creme brulee was on the firm side, but with a very nice flavor and still well within the normal range of texture for this dish. I think it would have been fine with just the berries and without the whipped cream, but I would order this again.

We had a nice lunch at Steakhouse 71, good enough to make me interested in going back to try the very different menus available at breakfast and dinner. The sandwiches we tried were heavy and a tad on the greasy side, although not necessarily in a bad way. But the steak was delicious – a good thing in a restaurant with “steakhouse” in its name – and the Chopped Salad could have easily served as a meal for anyone looking for a lighter experience. My family didn’t feel that Steakhouse 71 was a “must-eat” that we’d book at 60 days out to make sure it was in our plans somewhere, but we all agreed that we’d be happy to return.

Have you eaten at Steakhouse 71? What did you think of your meal?  Let us know in the comments!