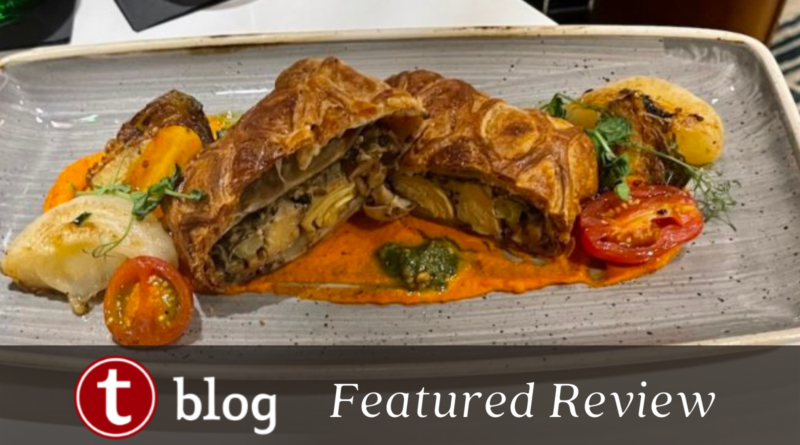 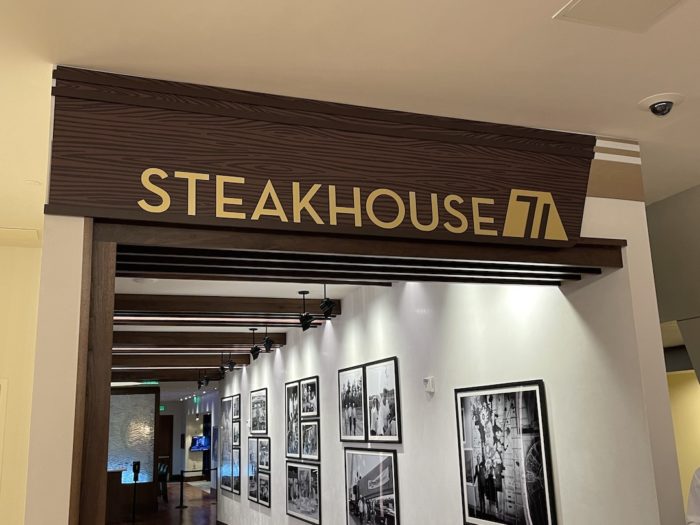 Previously known as The Wave… of American Flavors, Steakhouse 71 is located on the first floor of the Contemporary and evokes the sleek, modern design of the resort, along with a pixie dusting of Disney history. 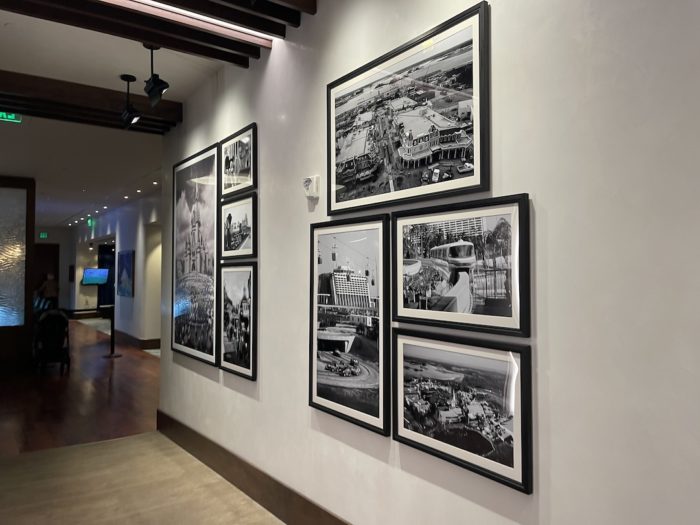 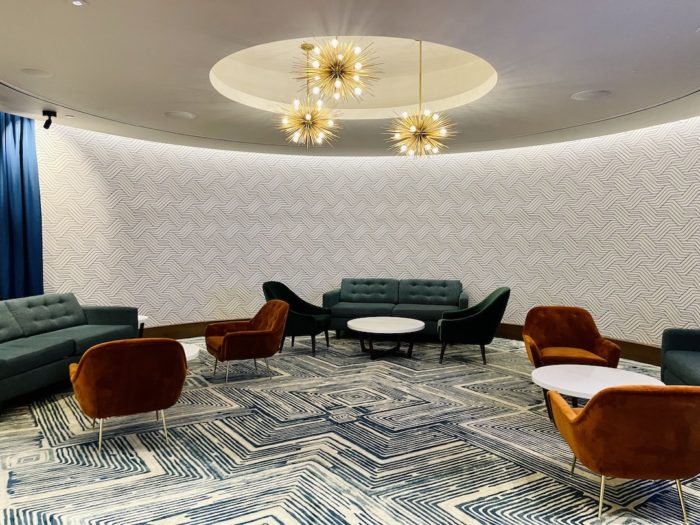 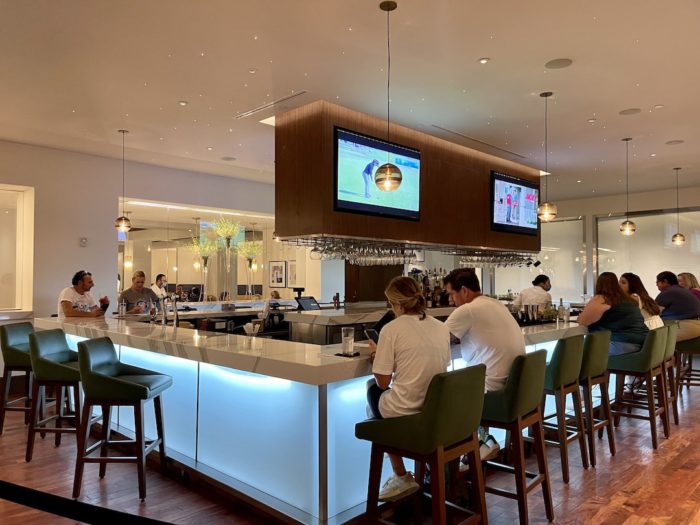 Now because Steakhouse 71 occupies the space previously home to The Wave… of American Flavors, Steakhouse 71 is entirely enclosed and doesn’t offer the same atmosphere or rooftop views as the resort’s California Grill. 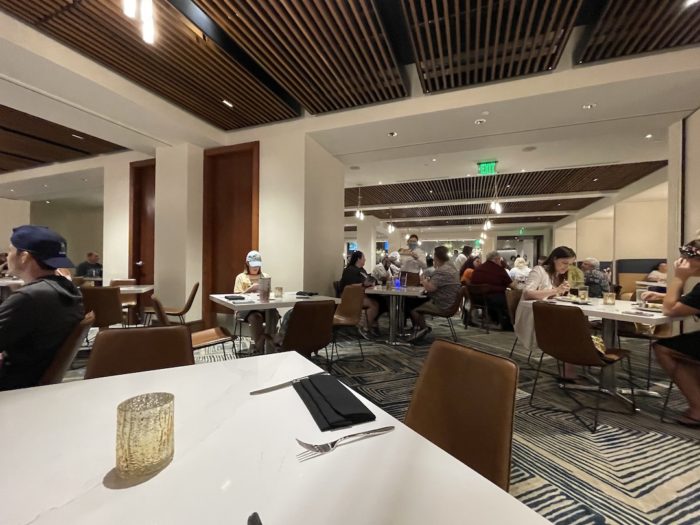 However, its new mid-century design is a huge improvement and more on theme with the Contemporary; and for a splash of color, a new, bright, modern mural of Cinderella Castle serves as a cheery backdrop. 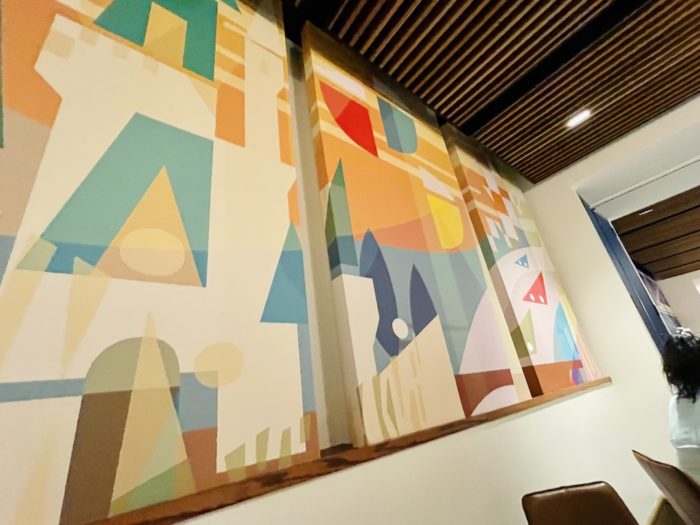 Our park reporter Chrissy recently tried out Steakhouse 71’s lunch menu to see what the chefs have cooked up for this reimagined restaurant, and she’s happy to report that there are some definite winners here. 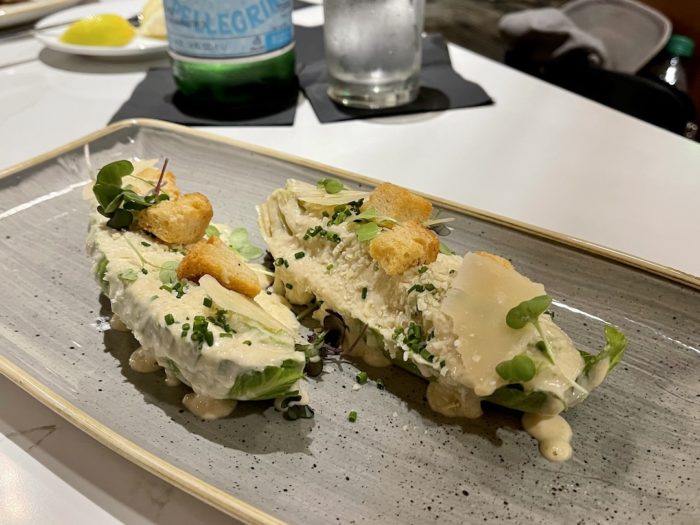 Designed by the chef’s daughter to be eaten with your hands, Disney wants us to stay neat and pretty, so use utensils. Anyway, the dressing for this Caesar was deliciously thick and creamy and heavy on the wonderful anchovy. Just so darn good. Don’t skip! 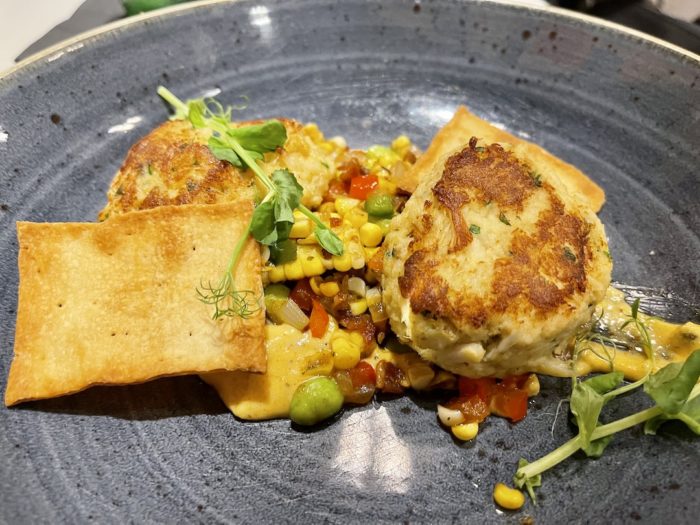 The house-made Saltine crackers and the ample crab with minimal filling will make any crab lover happy. It’s a great value for $15.00. 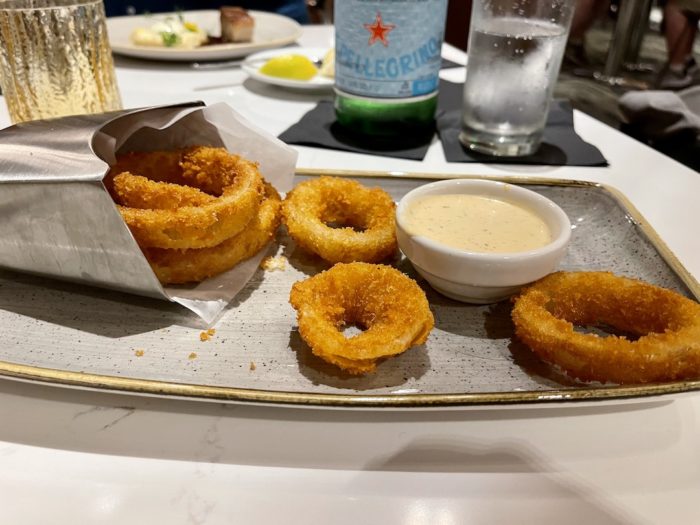 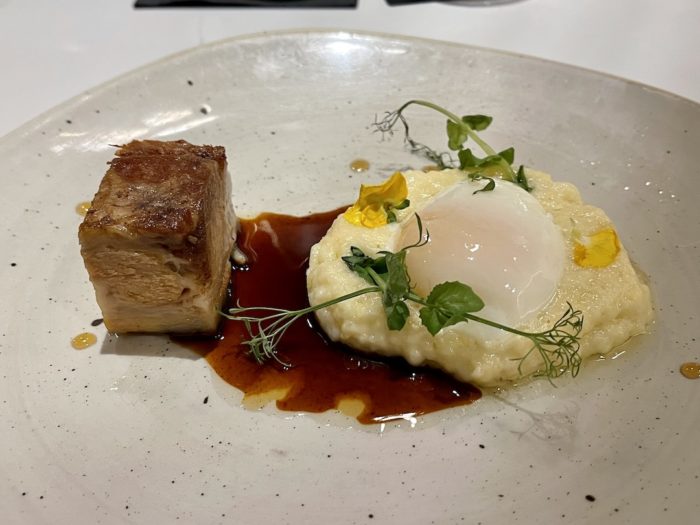 This cult classic from The Wave… of American Flavors has thankfully survived the restaurant change! It’s maple-lacquered Pork Belly, smoked cheese grits, and an egg; but don’t be fooled by its simple description. The blend of flavors is sheer perfection.

Now while Chrissy said the cheese grits and reduction/au jus were the stars of this dish, Chrissy says she’d still skip it in favor of the Caesar salad. Salad over pork belly and cheese? That’s a true testimonial. 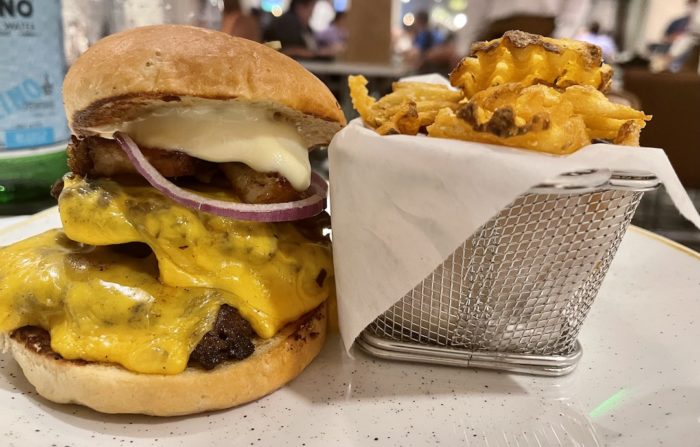 Yum. Yes. This is exactly what a steakhouse burger should be and comes with the guest’s choice of a petite wedge salad, parmesan fries, or pasta salad. Warning: Don’t ask to share fries because wow. 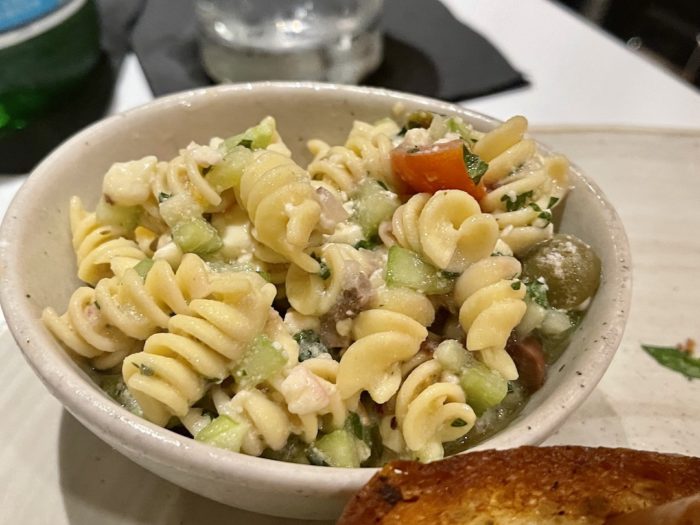 This is the pasta salad, which also was good, but the fries still reign supreme. 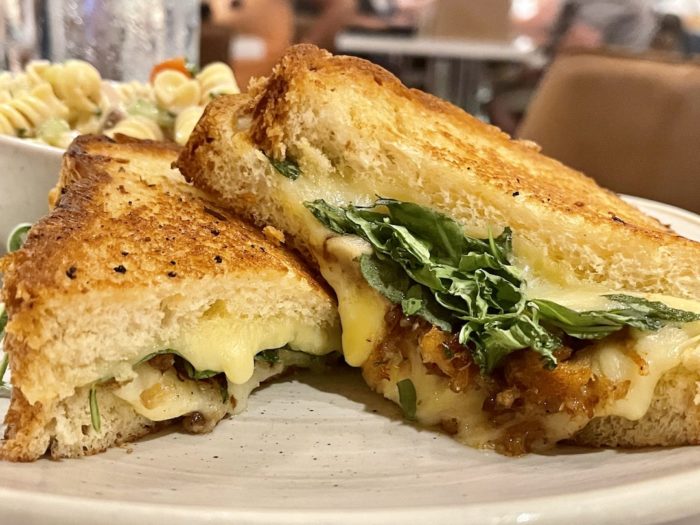 Described as Brioche, Gruyère, Smoked Gouda, Shredded Pork Belly, Caramelized Onion Jam, and arugula with the guest’s choice of a petite wedge salad, parmesan fries, or pasta salad, Chrissy says this entree wasn’t kiddo friendly (at least not for hers) and not the brightest star on the menu. Skip. 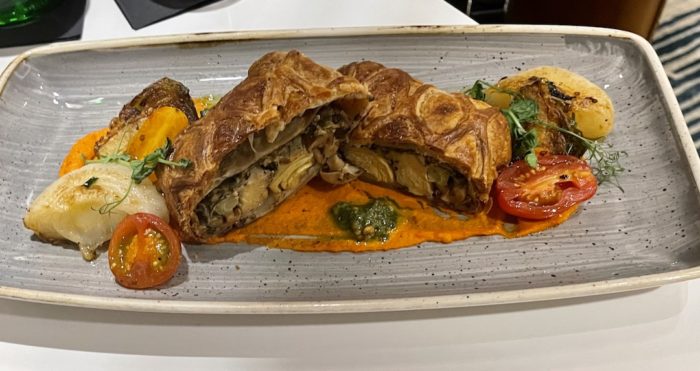 The menu lists this entree as Mushroom Duxelles and fire-roasted artichokes wrapped in puff pastry, Romesco, and Brussels Sprouts. 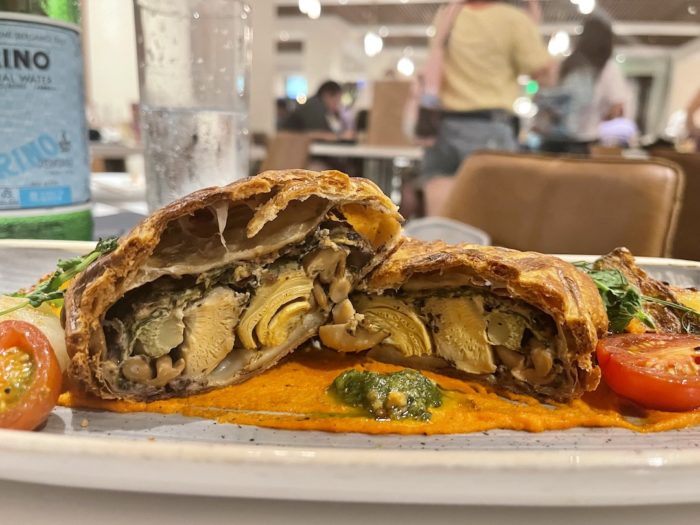 It’s 100% the best entree Chrissy sampled and possibly the best plant-based item on property. Do NOT skip this one and hat tip to Chef Nik for this amazing banquet! 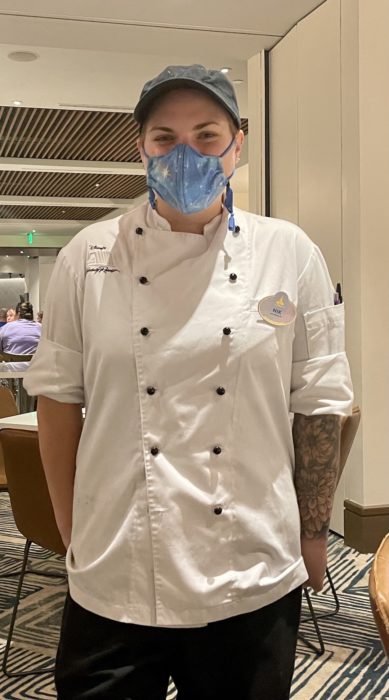 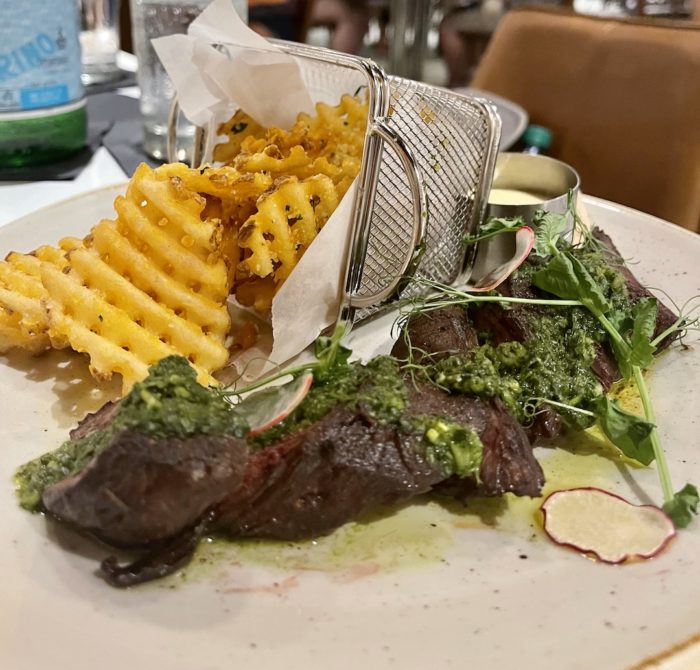 While the Hangar steak was tough because of the lack of fat, it was still tasty and came with garlic-parmesan fries, Chimichurri, and Truffle Aioli. 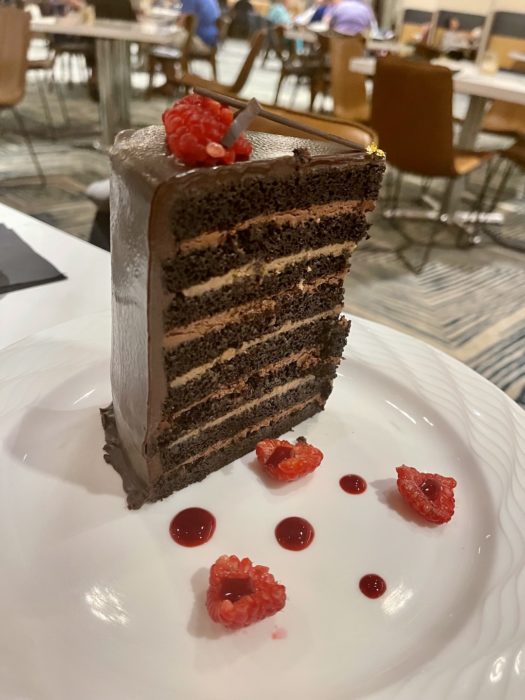 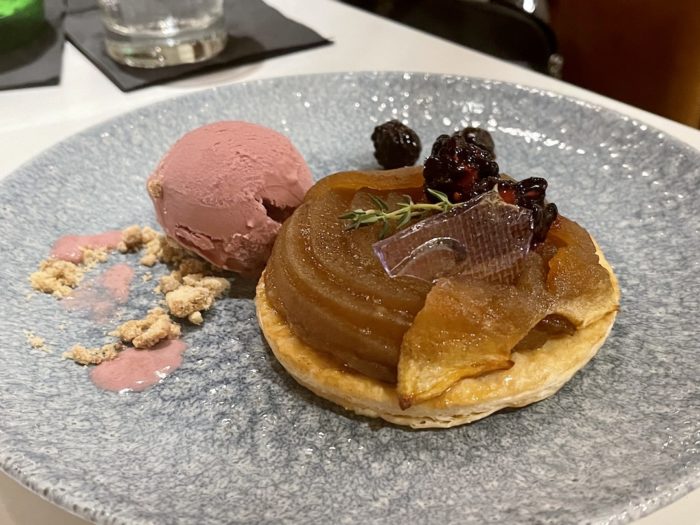 Don’t tell anyone this one’s plant-based. They won’t believe it’s that good. 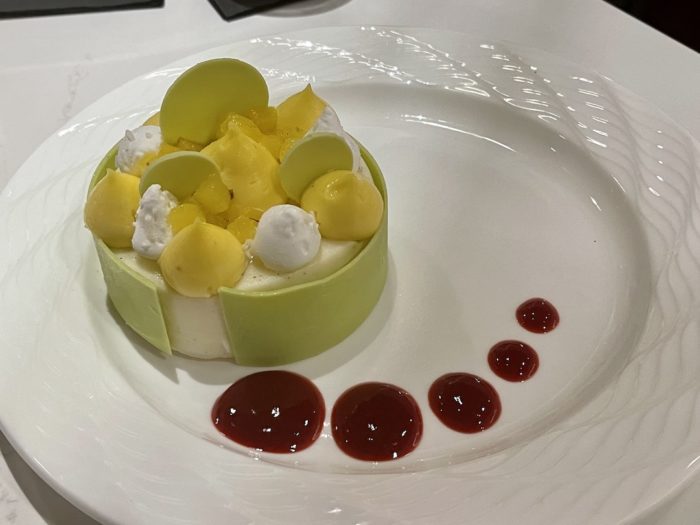 As coconut chiffon cake, Mandarin Curd, and compressed pineapple, this one feels like an all-too-familiar design and flavors that are maybe boring? Let’s just say, Chrissy didn’t love this one. 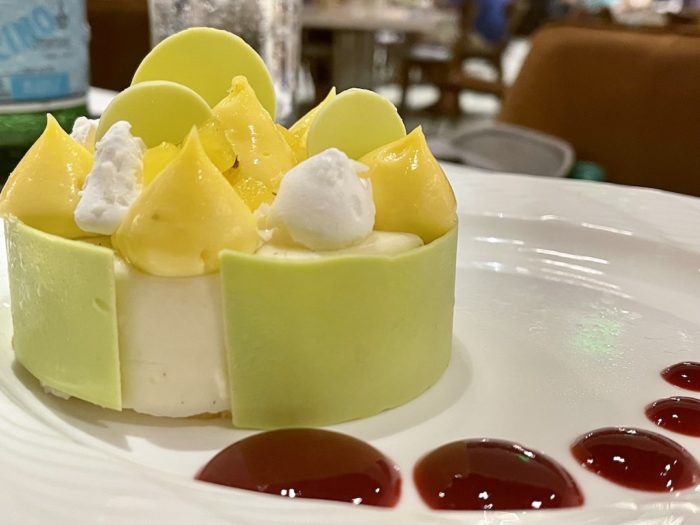 Overall, this was a happy, filling meal; and the things Chrissy loved, she REALLY loved. Whether you’re in your fancy duds or what you wore to the park, you’ll be comfortable in the setting and able to enjoy a tasty meal.

Would you be interested in dining at Steakhouse 71? Let us know in the comments!

One thought on “Steakhouse 71: Classic, Contemporary Fare Sure to Please”