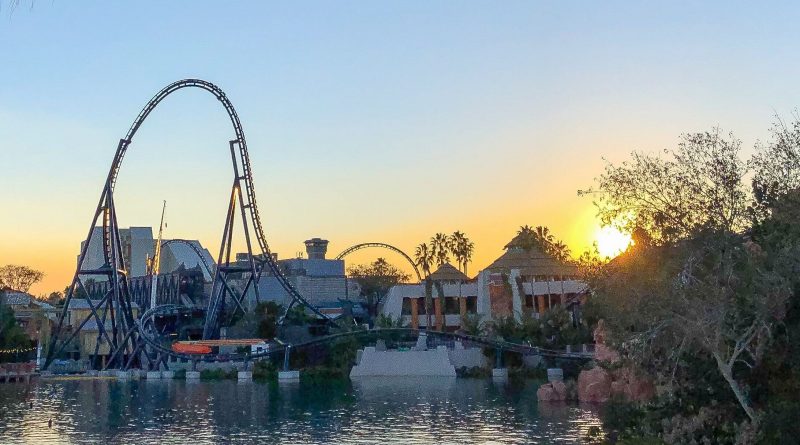 It is on!!! Guests will soon be able to enjoy the thrill of the newest roller coaster in Orlando! That’s because June 10, the Jurassic World VelociCoaster will officially open to Guests. The attraction will open in the Jurassic Park/World(?) section of Universal’s Islands of Adventure.

The story behind the VelociCoaster is that the coaster itself is the latest innovation from Claire Dearing (Bryce Dallas Howard) and it’s goal is to drum up business at the dinosaur park. The goal is to allow visitors to observe raptors from a unique perspective and get up-close. These will be relatively “safe” encounters with the dinos. Owen Grady (Chris Pratt), however, issues his warnings about the potential problems of dinosaurs and humans interacting. Both Bryce and Chris are featured in the attraction, as is BD Wong as Dr. Henry Wu. The raptors, Charlie, Delta, Echo and Blue, also have roles.

Of course, as it usually happens – things will go horribly wrong. Yep….you guessed it, the raptors will escape from their paddock, and they will be chasing you.

“You’re going to be the prey,” says Thierry Coup, senior VP and chief creative officer at Universal Creative. “What better premise for a themed coaster?”

For the finale, the VelociCoaster will perform a 360-degree barrel-roll inversion just a few feet above the lagoon. Here you will feel a weightless sensation as you sail along the water. In all, the ride will deliver 12 seconds of airtime.

The VelociCoaster doesn’t have an overly tall height requirement though. Guests will only need to be 51 inches to experience the attraction.

Take a look at a snippet of what the experience will be like. It’s definitely got me saying, woah!

More details about the coaster can be found in this great USA Today article.

First, from April 11 until June 30, Passholders will be able to save 30% on select Universal Express Passes for both Universal Studios Florida nd Universal’s Islands of Adventure. In addition, from April 15 through June 30, Passholders who spend $100 or more (pre-tax) in one single transaction at select Universal Orlando shops, will receive a $20 discount to use on a future purchase of $50 or more through July 31, 2021. Finally, If you’re a Passholder visiting Volcano Bay, you can receive a 10% discount on Cabana and Premium Seating rentals from April 11 through June 10.

So, who else is ready to potentially become lunch? All I can say is, let’s do this! June 10 can’t come soon enough!