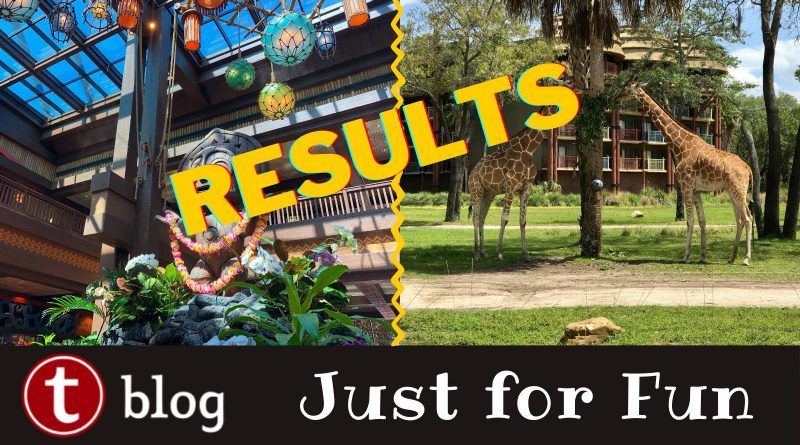 The results are in! And what a journey it has been! We started out with 32 WDW resorts, and through the course of 2 weeks and over 1000 total survey results, you have crowned the winner. So let’s not bury the big news. The winner of the 2021 WDW Resort Tournament is … the Polynesian Village Resort!

With 16 votes submitted, the championship match was an even battle. But from that point on, Poly ran away for the win. The final score was 59.9% to Kidani’s 40.1%. We’ll dig more into full tournament results later (yay for data!). And, as a data nerd, I can’t believe I’m saying this. But we all know the comments are the real star of this tournament. So let’s see what you all had to say!

Happy with the Results

Unhappy with the Results

Enough with the words – give me the numbers!

It’s fun to crown a winner, but it’s more fun to pick out losers too, right?! Using some fancy data tricks, we can weight results for each resort. It’s a bit of an iterative process that starts with scoring each resort that lost in the first round as “tied for 17th place”, etc. So I can then calculate things like “strength of schedule” (did the resort go up against heavy hitters?), longevity in the tournament (during which round was it eliminated), and overall scores. This gives each resort a new “ranking,” instead of all of the ties. And I can keep recalculating until things stabilize and I have a good idea of an overall rank for each resort. So for your viewing pleasure:

Compared to original seed, the resort that most over-performed expectations was our resort winner. The Polynesian Village Resort went all the way from seed 18 to coming in 1st. Crazy!

Thanks for joining us on this journey! And for making your voices heard. I hope you’ve had as much fun as me seeing what happened each round of voting. And if you enjoy my mix of data and humor, check back in tomorrow when I write about guest satisfaction at various attractions pre-pandemic and post re-opening.

Do you have other ideas for interactive series that you’d like to participate in? Responses to our last round of entertaining commentary? Let us know in the comments!