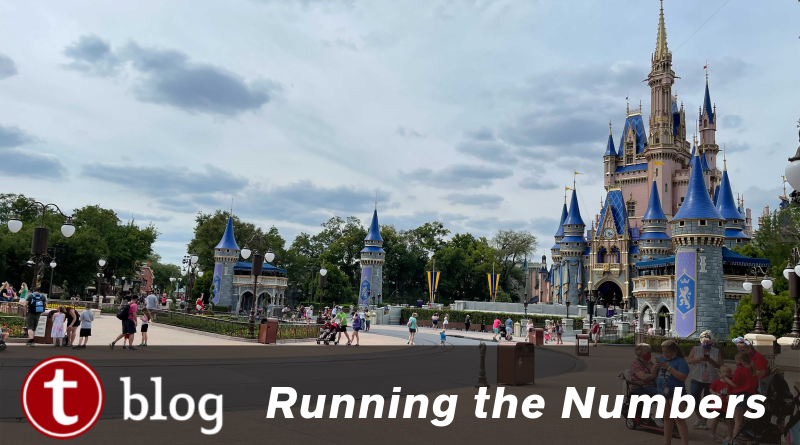 Hello again! In yesterday’s post, we set up an experiment. For those of us who think sleeping in on vacation is relaxing, I wanted to know how much extra time you’d have to spend in line if you get to the parks well past rope drop.  The answer turned out to be: not as much as you might think!  To wrap it up, today we’re going to do a deep dive into the results and then take a brief look at how these results might hold up in the future.

Let’s quickly recap what we did yesterday:

Chose two plans similar to those from the Unofficial Guide, and two dates to test with.

Used different methods to optimize within each set of three.

As it happens, everything did better than the paper plans when you looked at the amount of time spent in lines.

At first glance this might seem surprising, but it turns out to have a simple explanation. These plans are compromises, and in most compromises nobody gets their ideal outcome.  When you adapt a plan to work better on March 13th, you run the risk of making it less perfect for August 10th. That’s exactly what the data show us, that when you take that average plan and spend a few clicks tailoring it for a specific date, you do better.

As you can also see above, the one-click plans beat the pants off everything else by a wide margin when it came to minimizing time in lines. What isn’t obvious until you look at the total time is that these plans are also the longest from start to finish.

When you dig down, it turns out that these plans all have a large block of free time in the mid-afternoon and then have you in the parks until closing.  This is easily explained if you look at what’s happening in the parks – the chart below shows the predicted distribution of crowds for our test dates based on the time of day.

The message we’re hearing from the data here is: if you want to spend the least time in lines, spend your time in lines when they are shorter. Take a break in the middle of the day, go back to your hotel, and have a nap or a swim.

The three-click plans were the winners when you looked at the time from start to finish.

The plans in this group were mostly generated by looking at the one-click plan, then adjusting the end time of the day to eliminate the mid-day free time. After using the second click to change the time, I used my third click to Optimize again.  I only adjusted the order of attractions in 2 of the 12 plans that used this method — and that was just to eliminate a few minutes of walking.

I found that every single three-click plan takes at least 50 minutes less time than its matching paper plan; in many cases closer to an hour and a half.  Since these plans had minimal free time, that translates to the same difference in line-waiting time.

So what’s the take-home here?

First off, a morning routine that focuses on leaving your resort with drill sergeant efficiency may not be necessary. Ten minutes on your sofa the night before could win you an extra hour in bed. It might even win you two — one pattern I saw repeatedly was that if there was a big bump between 9:00 a.m. and 10:00 a.m. that I couldn’t smooth away, it was usually gone if I started even later at 11:00 a.m.

One thing that can really make a difference is how busy your plan is. The Parent plan didn’t have as many attractions as the Adult plan, and you can see how the 10:00 and 11:00 a.m. plans didn’t stretch far enough to get the boost from those sweet evening hours of shorter lines — even at 11:00 a.m., it was still 50 minutes more in line than arriving at rope drop.  When I added a version with a noon start time, the difference dropped back to under half an hour.

This pattern of really late starts sometimes being better than sort-of-late starts is consistent with real world data from testing teams in the parks. And the optimizer knows it: in many cases, the one-click plans told me not to start touring until 1:00 p.m. even though I was arriving at the parks much earlier!

A second takeaway is that if you really want to spend less time in lines, taking a mid-day siesta can cut your wait times significantly.  This isn’t going to be everyone’s cup of tea, since wanting to sleep in is not the same as wanting to stay late in the parks, but maybe it is yours?

The last big lesson is that the 5-10 minutes you spend on your sofa the night before matter more than what time you arrive at the parks. It needs to be said that there were plenty of times when a later start did cost 20 more minutes in line.  Personally, I consider this a fair trade for extra sleep, although you might not.  But the average time saved by the simple three-click optimization was just about 70 minutes. In an extreme example, the Adult paper plan on a crowd level 8 day couldn’t be finished unless you started at park opening, but for the three-click method even the latest start time had you out of the park half an hour before closing.

The data is really talking to us loud and clear here: if you spend a little time the night before, you can pick a late arrival time that is the best balance between when you want to start touring and when you want to leave the parks. But even if you hit the Optimize button on the bus on the way to the park entrance, it can give you an extra hour to spend at the pool.

What are we missing?

We all know that the past year has been unusual.  If we took a time machine to the past and ran this same experiment when the parks still had FastPass+, nighttime fireworks, and many of the shows that are currently closed, it’s very hard to say how it would affect the results. Nighttime entertainment might keep people in the parks longer and cut into those evening hours where the waits are shorter right now.  But advice to ride during the fireworks has been around for a long time, and if FastPass+ comes back that might make up for this by letting people skip some of the really long lines in the middle of the day. We’ll definitely need to revisit this in the future when the parks are more “back to normal”.

We also don’t know about the effects of Disney’s planned Early Entry program, which is not yet available.  It may be that Early Entry confers an unbeatable benefit that is worth waking up for if you’re staying on site, but we’ll just have to wait and see.  Only the future will tell what awaits, but if you’re visiting today and you’re not a morning person, take heart — the data here shows that you probably don’t have to choose between sleeping in and getting a lot done in the parks.

So what do you think?  Is an extra hour in bed worth 20 extra minutes in line? Are you in camp split-day with a break in the middle? Do you think this will hold up when fireworks and FastPass return?  Let us know in the comments!