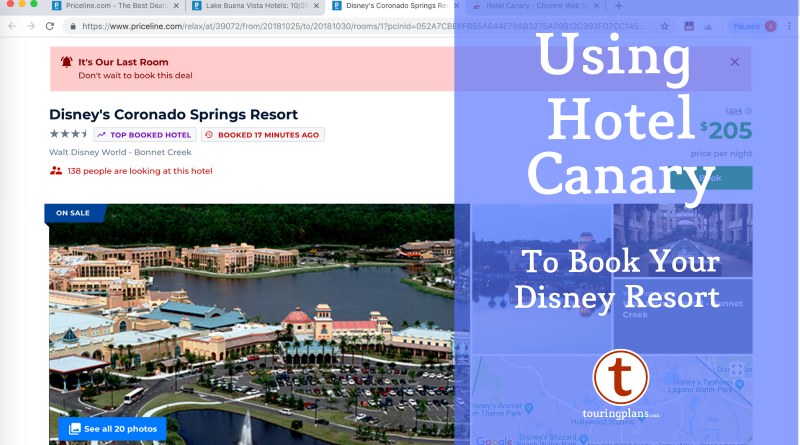 We know many of you saw Len Testa’s recent tweet about using Hotel Canary to book Priceline Express hotel deals:

Thanks to @TouringPlans' Liner community and JJT for the tip. pic.twitter.com/2XO9uKRM8N

Based upon the amount of feedback received, this is something of interest to you all, so we wanted to provide a little more detail on how to use it. Read on to learn more about how you can use the Hotel Canary Chrome extension to demystify some of the available deals available on Priceline Express.

By way of introduction, Priceline.com is a discount travel website that is probably best known for allowing users to “name their own price” by bidding for hotel rooms (as an aside, this functionality isn’t as popular as other booking options for hotels these days and is no longer available for flights at all). Priceline also offers Express Deals where you can book steeply discounted hotel rooms. The catch, however, is that you don’t know the specific hotel until after you’ve purchased the room and committed to staying there; you know the area the hotel is in, the hotel’s rating (on 5-Star scale) and some information about the hotel’s amenities. Once you book, you pay the entire charge for the hotel stay, and you’re locked in. Those of you that use Hotwire.com will be instantly familiar with the concept.

The good news is that you can book a room using Priceline Express for far less than you would pay through traditional means; the bad news is that you don’t know where you’re staying until it’s too late to change your mind. Hotel Canary, a Chrome extension, looks to help change that by predicting which hotel is being offered by comparing past bookings and the amenities that the hotel offers. You navigate through the booking process, and prior to booking, you click on the extension icon, and Hotel Canary will provide its best guess about which hotel it is. There are no guarantees, but it’s still a lot better than flying completely blind, or comparing hotel amenities with the offer to try to do the prediction yourself.

So, how do you use it? First things first, you need to be using Google Chrome as your browser, and you need to install the extension. Begin by navigating to the Chrome Web Store and search extensions for “Hotel Canary.” That should lead you to the page for the Hotel Canary extension, and you install it by simply clicking where it says to install the extension. Once you’ve installed it, make your way to Priceline.com, run a search and when the results come up, it will give you the option to view Priceline Express deals for your stay in the left sidebar. This will take you to a page showing the available Express Deals, in addition to various options to sort and filter the results. Select the deal that interests you. I’m using a 5-Star Hotel deal for the purposes of explanation, because I’m fancy. This will take you to another page that provides additional information about the hotel you’ll be booking. Hotel Canary does not, however, work on this page, so move through by clicking “Choose” one more time. This next page will allow you to actually book the hotel, but perhaps more importantly, it is on this page that Hotel Canary works its magic. Just click on the extension’s icon, and it will make its predictions for what hotel is being offered. So, in this example, Hotel Canary believes it is very likely that this Express Deal is for the Waldorf Astoria.  This is a fairly modest discount, but running a search on the same dates for a 4-Star hotel predicted one of several Deluxe Disney resorts for only $152: This ended up being the Animal Kingdom Lodge for $188, including taxes, so there are definitely some great deals to be had, including at Disney-branded hotels!

Two caveats that are worth noting: first and foremost, these are predictions. There are no guarantees about anything. In my single-use experiment, the hotel I ended up with was indeed one of the ones predicted, but you might have a different experience.

Second, predictions are not available for every deal. I looked at several deals while researching this article, and there were a number of instances where Hotel Canary didn’t have any suggestions. When that happens, you’re obviously on your own.

As Len said in his tweet, a very special thanks to our Liner community and JJT in particular for this very helpful tip!

So, have any of you tried this? What kind of luck have you had? Please let us know in the comments!