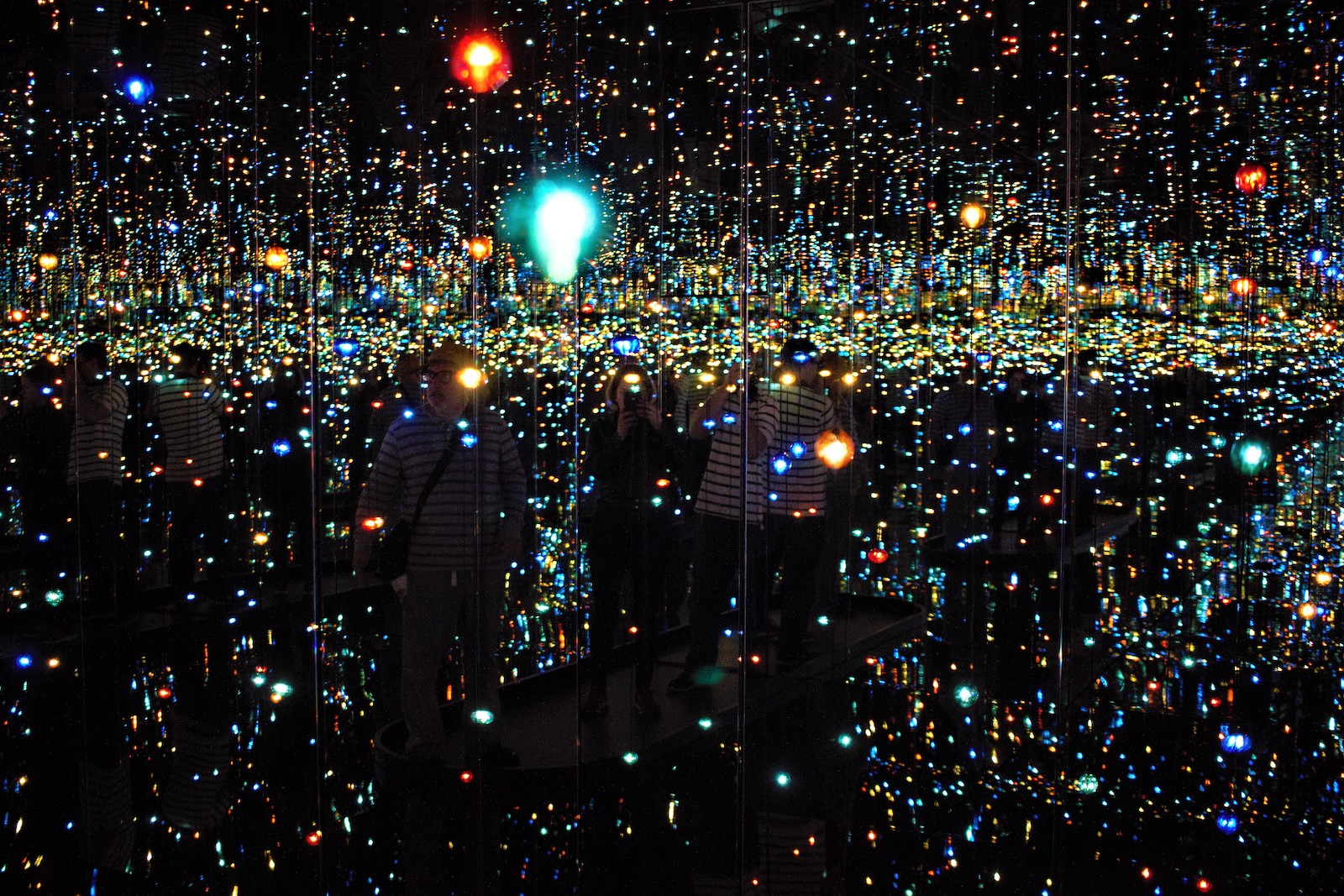 In case you missed the announcement, TouringPlans.com now covers Washington, D.C. as a destination. The city’s various attractions and touring style really lends itself to proper planning and that was no more evident than on my visit this past weekend to the Hirshhorn Museum to see the new exhibit Yayoi Kusama: Infinity Mirrors.

Yayoi Kusama is an 87 year old Japanese artist who has been displaying her work in the United States (and globally) for 60 years. She tends to like polka dots and soft sculptures in her sometimes eccentric art, but Infinity Mirrors is an exhibit that even the artistically-challenged (which I sometimes can be) can love.

So What Is It?

The basic premise of the exhibit is simple: There are 5 small rooms within the gallery that are completely lined with mirrors. Within the room are various objects that help give you the impression that you are in a vast landscape–what that landscape’s effect is varies with the room.

In addition to the rooms themselves, there were side displays, smaller infinity boxes, and room-filling atmospheric installations. It’s easier to show than to tell:

This room contained thousands of the phallic soft sculptures that Kusama loves to use. It is probably the least photogenic, but one of my favorites to stand in. The effect of the sea of soft sculptures was actually very pleasant and I’m not going to go into a psychological examination about standing in a phallus field.

Infinity Room #2 — The Souls of Millions of Light Years Away

My favorite concept, although I didn’t love the execution as much. The hanging lights were a beautiful effect (although I did hit my face off of them more than once), but they flashed an pulsed almost continuously. I would have preferred a more gradual change than a strobe effect, but I am also not exactly artistic so what do I know? This one I could see some great photos coming out of. It is the only one where you get free reign to walk (the rest have small platforms to stay on). You are also told you can touch the spotted beach balls–although we were asked not to spike them or anything. I expect to see some wonderfully playful pictures, even though mine aren’t. Also in this room were several other large pink spotted balls as well as a screen featuring the artist singing one of her poems on a loop. It certainly was a whimsical effect.

Okay, I didn’t actually go in this one. It turned out that even with the timed passes (more on that below) there were long lines to actually get into some rooms (more on that below too). After 2 1/2 hours of standing in line on hard concrete my knees were begging me to stop and my stomach had my small intestines at knife point and was threatening violence if I didn’t eat. I’m sorry I let you down.

The artist has a thing for pumpkins and after seeing this room I can’t say I blame her. The vibrant, glowing gourds mutedly reflecting off the ceiling and going on forever into the distance was mesmerizing.

Mirrored Boxes — In addition to the rooms, there were also two boxes lined with mirrors that guests could peer into. Both were absolutely stunning; the first playing with dancing lights while the second focused on dazzling spheres of color.

The Sticker Room — I’m not sure what to call this room, but the Sticker Room seems appropriate. The final room guests walk through on their way out, this room is a typical sitting room except everything is white. Guests are then given a card with about 6 stickers that they can place anywhere they like. I was there on the exhibits 2nd full day and there were a lot of stickers. By May, this room is going to get interesting… Hirshhorn Museum and Sculpture Gallery, Independence Avenue and 7th St, Washington, D.C., which is on the National Mall. If you are familiar with the skyline of the National Mall, it’s the round building. As one of the many Smithsonian museums, the Hirshhorn is free to get into.

How Long Does It Run?

Do I Need Tickets?

Oh yes. The tickets are free, but are necessary for entry.

Okay, How Do I Get Tickets?

This is a much tougher question to answer. The timed passes are released at noon every Monday on the museum’s website for the following week. For instance, on Monday March 6, the tickets will be available for March 14-20 and so on. My experience getting tickets the first day was not great–the system couldn’t handle the traffic. I have heard, however, that it’s run much more smoothly in subsequent releases.

If you don’t score an advance ticket, a small number of passes are held for walk-up guests. Those are released at 10am each morning and you should expect to be there no later than 9am if you want tickets, earlier on weekends.

Is It Too Crowded to Enjoy?

In short, no, but as I mentioned above, even I skipped one of the rooms due to the lines. Only 2-4 people go in any room at a time, and even though they are limited to no more than 30 seconds (often less), there is still a backup. I waited almost 45 minutes for the Souls of a Million Light Years Away room and the one I skipped was even longer.

My instinct, however, is that it will get a little better as the exhibit runs. Many of the staff seemed under the impression that people would jump around and gravitate to the shortest line, but that’s not how people work. Rather, everyone was waiting for direction and, lacking that, just got in the first line they saw. Even as I waited some members of staff were improvising and reordering lines so I think that once they get a better understanding of how it works things will move more smoothly.

Even if the lines are still long, it is totally worth the time. It is a wonderful, fun, invigorating exhibit and they brought it out at a brilliant time–this will be everywhere on social media.