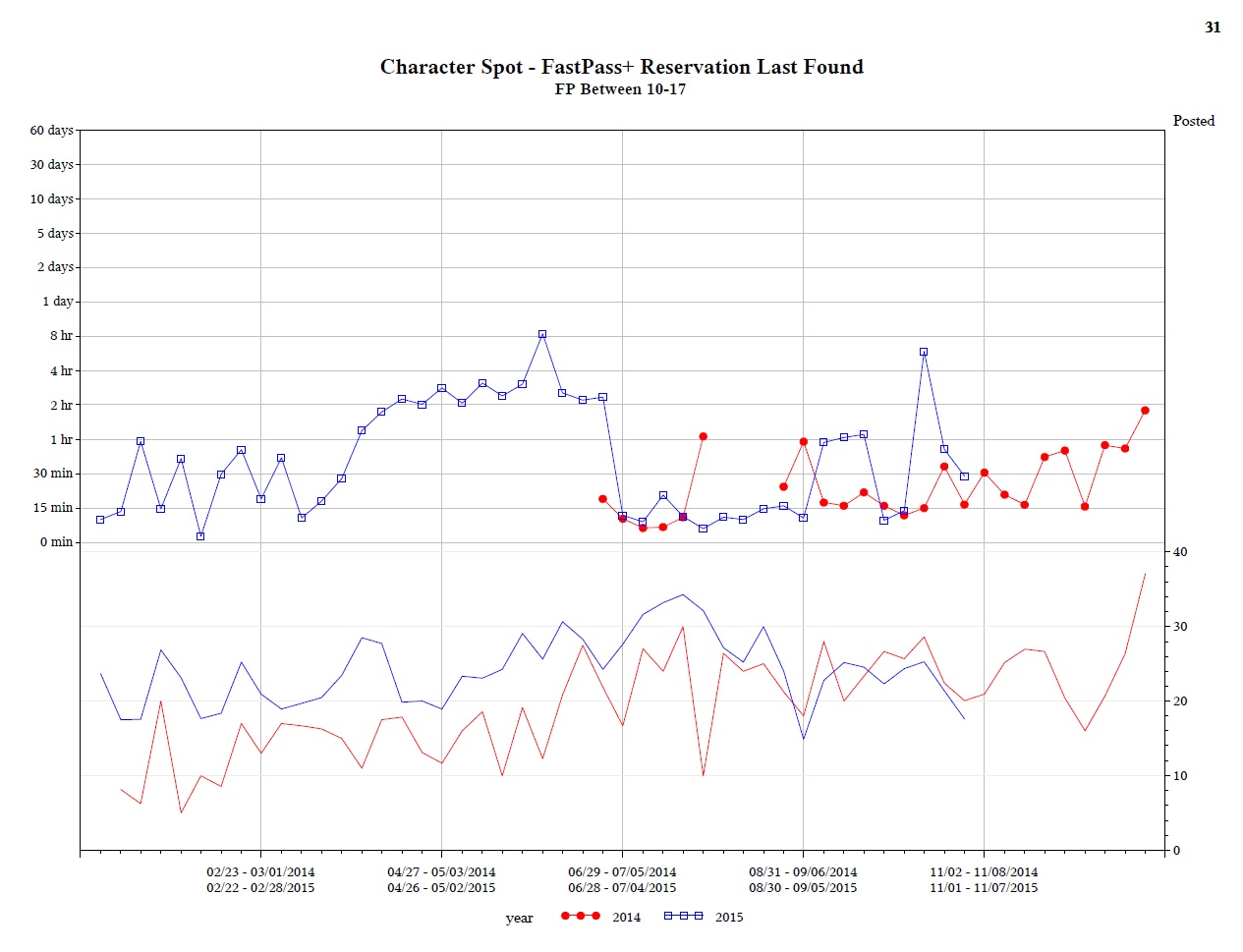 Minor update on 11/4: An Epcot CM has offered wait time data for a couple of attractions we didn’t have. See [2].

This is the second of four blog posts about wait times at Walt Disney World. We covered Disney’s Hollywood Studios yesterday, and there’s a lot of background material that I won’t copy into today’s post.

We think that the people who used to get in line at Maelstrom now get in line at other Epcot attractions. By itself, Maelstrom’s closure explains 60% of Epcot’s slightly longer lines.

Here’s the average wait and number of people in line at these Epcot attraction still open in 2015:

Here’s how many people were typically in line at Maelstrom before it closed on October 5, 2014:

We’re not going to count the 5 days in October when Maelstrom was open and fans were getting in their last rides. That was a special event.

Innoventions West also closed, in late April 2015. The Captain EO theater was also closed for a few weeks in 2015 to switch over to show upcoming Disney movie previews. Neither was popular. In fact, we can’t see any definitive impact in other attractions’ wait times with these closures. Those attractions had people in them, but the numbers are too small to stand out.

Based on the above information, there’s seems to be an 8% increase in standby waits at Epcot in 2015. Maelstrom accounts for 60% of that, or roughly 5%. What about the other 3 to 4%?

Epcot didn’t add any major new rides or shows in 2014, and its attendance grew 2% from 2013. It hasn’t added anything major 2015 either, so an attendance increase of around 2% for 2015 seems like a reasonable assumption. It’s possible that Epcot’s attendance growth is slightly higher than that, too, if multi-day visitors are choosing to skip Disney’s Hollywood Studios.

And as we discussed in yesterday’s post on Hollywood Studios, we think that Disney has resolved many of the technical issues around using FastPass+ in the parks, which would increase standby wait times versus 2014. Our best guess is that accounts for the remaining increase in standby waits. We’ll talk about this in detail when we get to the Magic Kingdom.

Our crowd calendar predictions for Epcot have done reasonably well for 2015, within +/- 1 point on average. There’s always room for improvement, but it looks like the models did reasonably well in picking up the effect of Maelstrom’s closure. Still, we’ll have updates to Epcot (and the rest of Walt Disney World) shortly. We’re also paying special attention to the closure of Soarin’ in early 2016.

As we did for the Studios, here’s a look at Epcot’s attraction wait times and FastPass+ availability for 2014 and 2015. We’re not able to see a pattern Here’s The Seas with Nemo and Friends:

Average wait times are between 10 and 20 minutes almost every week, so there’s not much variation here. A couple of 2015’s FastPass and standby wait peaks line up, which is interesting. But much harder to get FastPasses in late July 2014, late August 2014, and early October 2015 don’t seem to have corresponding spikes in standby waits. Like The Seas with Nemo, Turtle Talk’s average wait times don’t vary much: between 8 minutes and 22 minutes over the past two years. And while there’s a sharp drop in FastPass availability in early October 2015 – from almost instant availability to selling out more than 4 hours in advance – wait times only increased by 2 minutes. Also, FastPasses got easier to get for the first few weeks of September, 2015, while standby waits went up. It’s hard to see a consistent pattern in those two things.

Here’s Living with the Land: Again, there are lots of weeks where you could get an “instant” FastPass at LWTL. (It’s an underrated ride – everyone should go on it.) There’s a big drop in FastPass availability around the last week of September 2015 to the first week of October. But standby wait times were down slightly.

In June 2014, Living with the Land switched from a Tier 2 FastPass+ attraction to Tier 1. That doesn’t seem to have affected its standby wait. Prior to the switch, LWTL was averaging a standby wait of 11.6 minutes; it was 10.6 minutes after the switch for the rest of 2014. Since early May, standby waits at Soarin’ haven’t been lower in 2015 than at any point in 2014. Yet FastPasses in 2014 ran out as fast or faster for around 8 weeks. And while there’s a sharp drop in FastPass availability and sharp increase in standby waits in mid-July 2015, there’s no corresponding spike when the same thing happened in 2014. Without looking at the actual numbers, the blue lines here look like they follow the same pattern. So that’s interesting. But there’s a lot that’s hard to explain, like why wait times were 50 minutes when FastPasses ran out more than 8 hours in advance in late August 2014, but wait times were around 80 minutes when Fastpasses were available longer in late June 2014 and early July 2014,

Here’s Test Track’s Single Rider line, which doesn’t have FastPass+. That huge increase in waits in 2015 is almost certainly either a technical problem with the ride, or bad posted wait times. Other than early July 2015, there doesn’t seem to be a match between the spikes in FastPass+ demand and wait times.

Here’s Sum of All Thrills. It doesn’t have FastPass+, but we still collect wait times: Here’s the Gran Fiesta Tour in Mexico, which also doesn’t have FastPass+: The good news is that wait times are low here for most of the year, rarely exceeding 10 minutes most weeks. This one’s strange. In July 2015 you could get a FastPass within 15 minutes of “now”, so FastPass demand was low. Yet standby waits were the highest seen over two years, except for Christmas. When FastPasses were harder to get in September 2015, standby waits were lower.  And the spike in FastPass+ demand in October 2015 had lower waits too.

I’ll cover the Animal Kingdom tomorrow before heading out of town for the weekend. We’ll finish up with the Magic Kingdom early next week.

This effect is more pronounced when wait times are low, and when there are relatively few attractions with posted wait times. Epcot’s average posted wait is 25 minutes, and we count 5 attractions in our Epcot Crowd Calendar.

[2] A kind Epcot CM has offered us some hand-counts of guests at Innoventions West’s Where’s the Fire?, The Great Piggybank Adventure, and IBM’s Think exhibits, which closed in early 2015, plus the first version of the Anna & Elsa meet-and-greet at Norway, before it moved to the Magic Kingdom’s Princess Fairytale Hall in early 2014. We’re told these guest counts were collected manually, and not on a regular basis. We’ll update the charts if there’s anything we can use.

27 thoughts on “What’s Up with Wait Times at Epcot?”