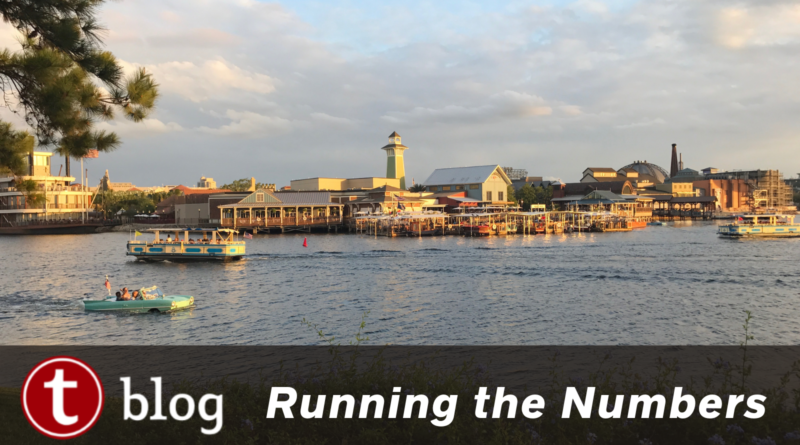 I’ve always thought it was obvious that it probably cost more DVC points (relatively speaking) to stay at resorts with easy access to EPCOT during the Food & Wine Festival. But one thing I’ve learned as a mathematician is that “obvious” things are frequently wrong. So today I’ll be doing a little number crunching to look at seasonal variation in the number of points needed for Disney Vacation Club reservations.

You may wonder: is this information of any practical use, or is it just an excuse for your humble author to go data diving? Well, I’ll freely admit that the specific applications here are limited. The findings apply to both DVC owners and renters, but multiple visits are required to see any real benefit. Nonetheless, if you are an uber-planner, an ultra-optimizer, or just a lover of curiosities, I think you’ll find something interesting to take away.

In this article, seasonality doesn’t mean winter, spring, summer, and fall.  We’re talking about DVC Seasons; the segments of the year that determine how many points are required for a particular room reservation.

Never forget that DVC points always have a dollar value attached to them, whether it’s dues or rental fees. Seasons are the same supply and demand adjustment that you see with rack rates. That means the rise and fall that you see reading across the visual above is a rough representation of how popular different times of the year are for DVC reservations.

Season 7 comprises only Christmas and Easter, and Season 5 is only one week long.  These are excluded from the analysis below, because it’s too easy for these really short periods to have a disproportionate effect. Seasons 1 & 2 are September and winter, respectively.  Season 3 is late spring/early summer. Season 4, with most of the summer and fall, is the largest season covering about 40% of the year.  Season 6 is the most “expensive” season that we’ll include below, and it covers late winter and spring.

One problem we have to solve is that between seasons we want to know whether the number of points for a given resort is rising faster or slower than it “should be”.  But if we just calculate the difference between the price in each season and the average within each season, we expect that number to go up even if the trend is staying the same. This happens because the difference in points between the cheapest and most expensive room in each season is also increasing.

To address this, I scaled the points as a percentage of the median in each season — I subtracted the seasonal median from each point value, then divided by the median.  This method isn’t 100% foolproof and wouldn’t have worked if the ranges weren’t widening at roughly the same rate as the median was increasing, but it turned out to be a good choice here.

Chart, straight out of the gate!  I started with the Grand Villas because they aren’t as many of them and we can ease into looking at the visuals. On the left we have a heatmap of the scaled percentages. On the right in the Variance section, we have the difference between the seasonal percentage and the average over all seasons (for the same resort). The range column represents the distance between the minimum and maximum for the resort over all seasons, showing how big the swing is.

What did we find?

How do those changes translate to points?  A 5% difference in Season 6 is about 40 points; a single weekday night in this season ranges from 66-161 points.  So these changes aren’t getting you close to an extra night in the Grand Villa.

Looking at the Studios, we can immediately see the same tiering effect that we noticed before.  And we can see quite a bit more variation in the heatmap as well.  The Poly standard view, the AKV Club level, and the Riviera Tower (2-person) rooms have the biggest total swings.

The Poly is favorable in Season 1 at 13% less than average and 12% more expensive in Season 6.  The AKV Concierge room is 11% less expensive than its average in Season 6.  For comparison, 10% in Season 6 is about 14 points; a single weekday night in this season ranges from 12 to 28 points.

This chart also makes it easy to cherry-pick some data and show a practical application. Let’s say that you’re going to make a 1-week visit in Season 2 and a 1-week visit in Season 6.  You’d like to stay in an AKV Club Level room on one visit and on the other you’re going to pick a Boardwalk Standard Room.  It seems “obvious” (there’s that word again) that you can minimize the points by putting the more expensive room in the cheaper season.  But does the math turn out that way?

I chose this example because of the obvious large favorable swings, but I tried a few others and found the same counterintuitive results.  The total difference in points wasn’t as large, of course, but if you visit at different times of the year then the savings from choosing a room that’s more favorable (or at least, not very unfavorable) will add up over time. And if you have two trips in the same year, it’s definitely worth doing the math to be sure.

Interestingly, most rooms cost more than average in Season 6.

The 2-bedrooms are quiet, with only the Copper Creek Cabins and the Poly Bungalows having a total range more than 10 percentage points.  Remember that we used the median for scaling, so the fact that those two rooms are huge outliers (HUGE!) doesn’t throw everything off the way that it might have if the calculations had been done with the average instead.

AKV Club Level continues to have some swing, but 5% in Season 6 is about 18 points; compared to weekday nights ranging from 31-75 points that’s not going to get you much.  (72 is the VGF Lake View room).

You know what else isn’t here, and hasn’t been in any of the other room types either? A seasonality effect of the Food & Wine Festival.  Another “obvious” take bites the dust. Maybe it’s because the days of “diet EPCOT” when there’s no Festival at all are shrinking more and more every year.

Were you surprised to see that it might not be cheaper to stay at the most expensive resort in the cheaper season? Do you do the arithmetic when planning out multiple DVD stays?  Let us know in the comments!