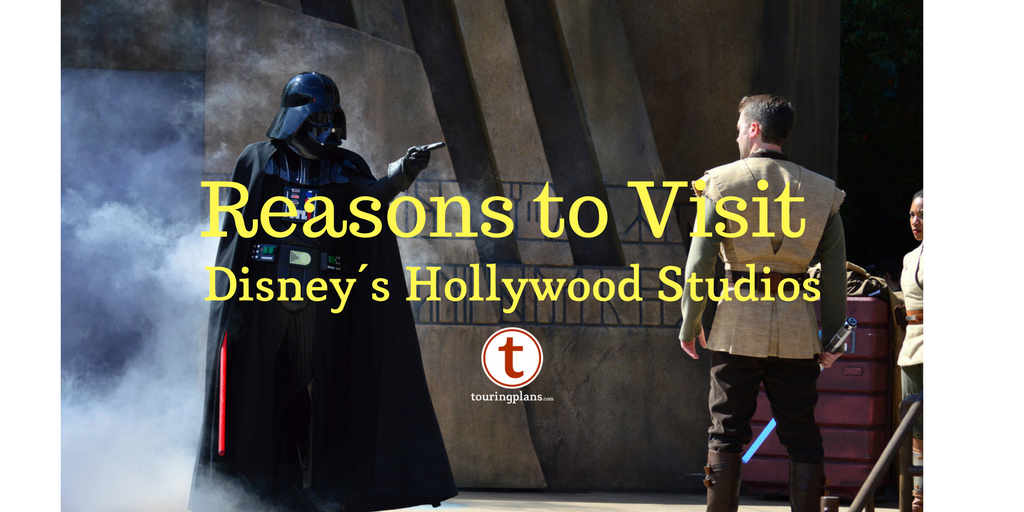 With the closure of the Great Movie Ride, I’ve heard many comments about Disney’s Hollywood Studios such as “See you in 2019”, or “I can’t believe Disney is keeping this place open”, or “You’d never want to waste a day of park admission to visit”. Surprisingly enough, there may be reasons why the Studios may be the best park for one day of your visit.

Is There Anything Left There?

First, let’s look at the makeup of the Studios as it is today. In terms of attractions, the Studios has:

Shows, which are the bulk of the attractions at the Studios, eat up more time in a day than rides in a park. In terms of *just* rides and shows, here’s how the parks stack up against each other based on what’s open today.

Where parks like Animal Kingdom and Epcot also eat up time are the immersive walk-around experience and various exhibits. At Animal Kingdom, you can roam around the animal walking trails scattered around the park or look at the exhibits at Rafiki’s Planet Watch. In Epcot, you can explore the country pavilions, some of which have museum-quality exhibitions. Both Epcot and Animal Kingdom have a large amount of drop-in musicians and performers, while the Studios does have a much smaller presence with Streetmosphere than in years gone by. As a result, Animal Kingdom and Epcot have the feeling of more going on in between a show or attraction. The sheer bulk of the rides at Magic Kingdom (even if they are fairly short in duration) and each short ride having a decent amount of time spent in queue make the day seem more full, even if you don’t ride everything.

If you have a young child who isn’t into thrill rides and won’t sit for stage shows, the Studios is not a good option–a ride on Toy Story and a showing of Disney Junior Live on Stage simply won’t cut it. Perhaps that is why that announcements of things coming “soon” that aren’t Star Wars (Toy Story Land, Mickey and Minnie’s Runaway Railway) are focused on attractions that have family appeal, including those with younger children. But if you have a family who needs or wants a day without much walking or a family that likes lots of sitting for shows, the Studios is your place to go. Likewise, if you have thrill-ride aficionados, the Studios offers more in the way of thrills than a park like Epcot or Animal Kingdom.

But isn’t the Studios a half-day park?

If you make wise use of rope dropping the park, a solid TouringPlan, and well-timed FastPass+ selections, plus have a desire not to sit through every stage show, the Studios can easily be done as a half-day park. However….

Sometimes all you need is a half-day park.

If you are planning to do some park hopping later in the day, if it is your arrival day, or if it is your departure day, you may only have a half day to spend. I don’t think many people would feel a lack of value if they did Tower of Terror, Rock ‘n’ Roller Coaster, Toy Story Midway Mania, and caught a couple shows before heading to their mid-afternoon flight. Likewise, heading to the park after a mid-day arrival to do some of these headliners plus catching either Fantasmic or Star Wars fireworks makes for a very enjoyable first-day experience.

Someone told me there’d be food…

If you’re looking for dining options, the Studios still has some unique meals compared with other parks. (And I’m not trying to suggest that a carrot cake cookie can be a meal….unless you’re cool with that. No judgment.) I recently had a surprisingly good meal at the Sci-Fi Dine-In, which has one of the most uniquely immersive themes for any Walt Disney World restaurant. At almost a decade since their last visit, my family still talks about our server at 50s Prime Time Café. And even places like Hollywood Brown Derby and Mama Melrose provide meals better than some other options on property. If You Can’t Wait until Star Wars: Galaxy’s Edge Opens…

For the Star Wars fan, the Studios has enough options to build some excitement for the new park land that seems to be a long time in the future. Although the Launch Bay holds very little interest for someone who isn’t much of a Star Wars fan, it can be a highlight for a Star Wars fan. Seeing the parade of Stormtroopers or the “Let’s bring out every major character in the franchise” stage show provides wonderful photo ops. Even something like Trials of the Temple is fun for Star Wars fans to watch. Oh, and you can’t forget at least a couple rides on Star Tours, too. Cap it off with the Star Wars fireworks, and you’ve got a solid bit of enjoyment for a Star Wars fan.

Overall, Disney’s Hollywood Studios is lopsided in its current offerings, and because it provides an experience that isn’t as well rounded with “lots for everyone”, it is easy to dismiss it as having nothing for anyone. And although I don’t think anyone would suggest that if you only have one day in Walt Disney World that this is the one and only park to do, for most people a Walt Disney World vacation is a multi-day affair. Depending on your interests, amount of time to devote to a park, activity level, and thrill ride tolerance, it may be that Disney’s Hollywood Studios might be the best park for one day of your visit.

Does your upcoming trip have a day at the Studios planned? Is the Studios a hard pass for you at this point? Let us know in the comments.