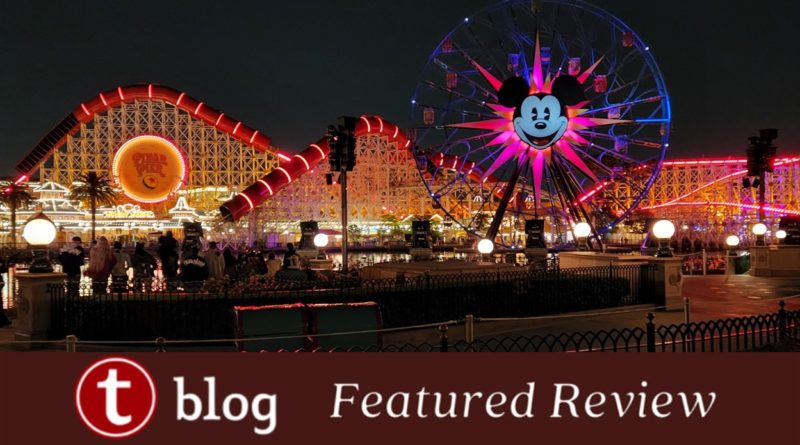 Now that nighttime entertainment has returned at Disneyland (and if you twist my arm, I’ll give you my completely biased rankings of the offerings), so too have returned the opportunistic upcharges. And like any Disneyland newbie visiting for a special occasion, I threw all of my money at them. What was the biggest money-eater during my two-day trip? The World of Color Dessert Party, which is a cool $89 per person – or, even more than the cost of the Main Street Electrical Parade Dining Package ($40), Genie+ ($20), a churro ($5), and at least one ILL ($20 for Rise of the Resistance, for example) all in one day.

I attended the Dessert Party on April 28th, which would’ve been the 7th night since the spectacular’s post-pandemic reopening. So I’ll walk you through what’s included, why I decided to buy it, what I experienced, and my recommendations regarding whether or not you should follow in my footsteps with regard to this particular purchase.

What’s Included in the Dessert Party

Technically, the dessert party is your only way to get guaranteed seating for a showing of World of Color. For the rest of what is technically included, we can turn to Disney’s own wording about the event:

For the $89 price tag, tax and gratuity are included (wahoo), and children ages 2 and younger can attend free of charge, as long as they sit on a lap.

So why did I decide to spend my own money on this event? Normally it’s not something that I’d look to be dropping a lot of money on. I’m generally happy with standing, waiting, dealing with masses of people – after all, I do Disney a lot.

But this trip was different. My husband and I were celebrating our 10th anniversary, so there was already that overarching “This is a celebration! Let’s Splurge!” mentality. We also only had two days in the park and were trying to see the Main Street Electrical Parade, World of Color, and Disneyland Forever (which was only happening one of the two nights of our trip). That meant we couldn’t wait out for every single nighttime event, and that we’d have two REALLY FULL park days and would be very exhausted at the end of them. This is partially because we knew we wanted to rope drop each day, and that meant leaving our hotel before 7 to get to the Esplanade by 7:15 for the parks opening at 8 am. A 10:15 pm showing of World of Color after already spending 15 hours in the parks … is intense.

Since I was willing to part with some money, and I figured if there was any time we’d want to be seated, it would be during this late showing of World of Color, I decided to just go for it.

I reserved the dessert party for the second (late) showing of World of Color, which happened at 10:15 pm on 4/28. The reservation is pre-paid, so it’s easy to “pay it off” before the trip and feel like the experience is free. Or something. When you reserve, you’re told to check in before 9:15. Which felt weird, because the first showing of the night was at 9 pm, so it obviously going to still be running.

On that same night, we had the Main Street Electrical Parade Dining Package, which meant that we had reserved seating at essentially the very end of the parade route. The parade was obviously still having some start-up learning curve stuff, because it kicked off about 6 minutes late that night (and had several characters running to catch up with their spots the next night). So the parade, which started at 8:30, didn’t fully pass us by until after 9:15.

We rushed over to California Adventure, and thanks to being “fast-walkers”, were over near the check-in by 9:20. That’s when things got confusing. We got in the taped-out zig-zag line on the ground near the lit-up sign for Dessert Party check-in. We asked the people in front of us if they were in line to check in, and they said yes. There were maybe 20 people ahead of us. We patted ourselves on the back for getting there in time, and the crowd of check-in-ers steadily grew to about a total of 80 people, most of them behind us in line.

The previous showing wrapped up around 9:25 and the hoards of people began filtering out, eventually clearing out by around 9:40 pm. At that point a cast member yelled at the folks lined up “Who here hasn’t checked in yet?” and a confused 90% of the group raised their hands. So apparently we mostly all got this part wrong – we were supposed to come and do an initial check-in before the first show started (why? why?), get wrist-bands, pick tables, and then be instructed to come back to the same spot between 9:30 and 9:40. Oops. Almost no one had done that part.

So at 9:45 pm, they started walking our parties down to the seating area one by one. As we were walked down, if we hadn’t actually done the check-in thing, we did the check-in thing and got wristbands and were asked if we wanted high-top tables or regular. Since we were early in the line and almost no one had done the initial check-in, there were plenty of either for us to choose from.

Once we were down at the seating area, the head server greeted each party individually, looked up their seats, and asked your server to see you to your table. This took at least 2 minutes per party, sometimes more. More on the implications of that later. None of the servers really knew where the tables were, and there was a lot of retracing of steps. This became problematic as the area filled in because the tables are CRAMMED on top of each other. Not enough room for an ECV to go between the lower tables and higher tables. Not enough room for a stroller either. And the tables are placed so close to one another horizontally that seat “one” at one table is literally touching seat “four” at the table beside it. This led to some really really awkward situations with people from different parties essentially having to share one seat with no space in between. It also made it difficult to get into and out of those chairs if necessary.

Once seated, your server departed to grab pre-made plates of food. When he/she came back, then they would take drink orders. A few minutes later they’d come back with those drinks. And … that was it. No further visits. Keep in mind that we were seated before about 75% of the total attendees that night. We had more attention from our server than most. The folks at the end of the line weren’t even seated until 10:10 pm. Thankfully, World of Color was delayed by about 6 minutes, but even so – several didn’t get drinks before the show started.

Now, the experience says two alcoholic drinks per adult and “unlimited” other beverages, and that just wasn’t the case. We would’ve had to physically walk over to the serving area, or seriously make a ruckus to get our server to come back to get more than one drink, no matter what the kind. But I’ll give Disney this – the tequila drink was really strong. If I had two of them, I wouldn’t have made it home.

The food was … food. The blue raspberry bundt cake and triple chocolate cheesecake were surprisingly good. All of the rest was underwhelming. I don’t think anyone is going to write home about the pre-packaged crackers. Or grapes.

An interesting note – the official Disney page doesn’t mention anything about special drinks for kids. But every over-2-but-still-a-kid attendee on our night got a plastic “glowing orb of destiny” (I didn’t get a close look because I wasn’t going to be that creepy stranger dressed like Loki sidling up to a table late at night) with a straw. It definitely seemed to be some sort of keepsake sipper. So I guess all those Ebay pirates need to bring their kids to this dessert party to get some really expensive potentially-exclusive sippers.

The view that we had was great! We requested a low table so that we’d be at the “front” of the section, and we chose the furthest-right table available at the time we checked in. That got us close to a centered view. Nothing was skewed, and we really enjoyed that location. It was our first time viewing World of Color and we both loved it. I’m an engineer, so watching the timing of the light effects and water streams to make the different visuals was fascinating all by itself.

Is the World of Color Dessert Party “worth it”? Absolutely not. In almost zero circumstances. You’re getting maybe $10 worth of food (okay, let’s call it $15 with California prices). And the drink values are pretty low thanks to the small window for drink service. I guess I could’ve asked for both drinks to be delivered at the same time, but … boo. So I got my one small tequila drink. And my husband got one soda.

Let’s say you make really good use of your time, and get the plate of desserts and double alcoholic drinks (or the cool sipper if you’re a kid). Even then you’re probably still at $35 of food and drink if we’re being generous. Which means you’re paying $54 per person for a seat. A seat potentially shared with a stranger.

I say avoid the upcharge. Go do the Main Street Electrical Parade Dining Package instead, which is actually a good value. But if you’ve got special circumstances and opt to do it, go and check-in before the first showing (even if you booked the late showing), get your wristbands, choose a seat to the right side of the seating area to get a good view, and then show up about 25 minutes before your actual showtime so that you’re one of the first to get seated. Make the most of your upcharge.

And, above all else, if you decide to book a package like this, or any other popular event, please PLEASE get a Travel Agent to help you. Disneyland is notorious for dropping things at random times, and I wouldn’t have gotten my reservations had Gina not stayed on top of things on my behalf. She was up until after midnight the night before we thought it would drop, and then started checking every 15 minutes at 5 am the next day. She’s a hero.

Have you experienced the World of Color Dessert Party? Did you enjoy or regret your experience? And most importantly, do you know what the glowing orb of destiny is? Let me know in the comments below!