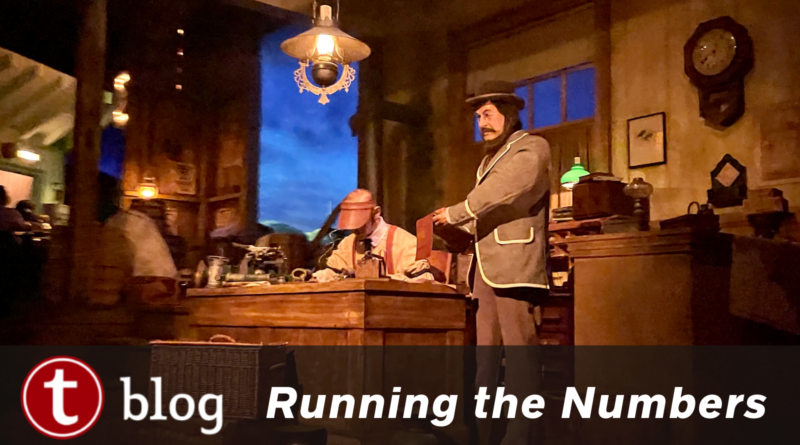 Five years ago, the failure-to-plan sob story was arriving at Disney World and discovering that there were no reservations available for Cinderella’s Royal Table. Fast-forward to post-COVID Disney, and it’s entirely possible to show up to the parks with your tickets and find that you can’t even get in because there are no Park Passes available. Today we’ll look at recent trends to answer two questions: how far in advance do you need to make your reservations, and what does last-minute availability look like?

This is a Running the Numbers article so as always there’s analysis and charts.  But if that’s not your thing, feel free to skip to the summary at the end.

Before we start, I’m going to take a minute and talk about what not to use in your planning around Park Passes. Do not use the predicted crowd levels on the Touring Plans Crowd Calendar to guess how far out you need to make your reservations. Here’s why: park capacity includes a lot of things that don’t go into crowd levels. We saw last week that crowd levels don’t line up very well with which days are sell-outs.

For each target date (the date the ticket was for), I looked at the previous 30 days of “query dates” – the dates on which availability was checked. Reservation availability might flip-flop a few times during the day; for each pair of dates I called the availability based on the last status observed on that query date.

For each park, I looked at availability both in the past, from January 1 – April 28, and the future, from May 14 – June 18. I didn’t think you’d want to look at it in the format shown above, so I made some charts.

In the above example, each row represents a target date. Each column represents a query date, but with a catch — the query dates are lined up based on how far away they are from the target date, not based on the actual calendar date. In the row for May 31, yellow-green in the column marked “t-3” means that reservations were not available on May 28.

You might notice that it’s not possible to see the actual dates in the rows. That’s because we’re using these charts to look at overall trends. We’re zoomed out way up high to look at the forest, and that means giving up some detail on the trees. So that we don’t get totally disoriented, the Date column shows us months, and the Weekday column shows whether the date is a Saturday or Sunday. The Crowd Level column is based on the observed levels, and more intense color means a higher crowd level.

The chart for future dates looks very similar to the one for the past. But it comes with some additional warnings.

These future charts were out of date and inaccurate the minute I made them. Because of course, I took a snapshot at a moment in time, and people have continued to make reservations since then. Please, I beseech you, don’t use any chart in this article to see whether Park Passes are still available for a given date. Instead, go to the Crowd Calendar, or to Disney’s reservation availability calendar.

You might notice that there is no column for crowd levels on this chart. Consider this my way of keeping you from reflexively trying to use the crowd level in your reservation planning when we already know that’s a bad idea.

A yellow-green stripe from mid-row to the end looks like passes are continuously unavailable, but remember those little blips on individual days.  This “misleading” presentation is intentional because I think that you, dear reader, want to know how far in advance reservations are readily available, not how far in advance you still might find one by stalking diligently and checking multiple times a day. That’s not how the Crowd Calendar does it, though, it counts those little blips when it shows the last date of availability — so don’t expect that these charts and the Crowd Calendar will match.

We’re ready to dive in and look at each park, and we’re starting with Animal Kingdom. Let’s begin by looking into the past; remember that the dates here are January 1 through April 28. (You can click to enlarge any chart).

Overall Animal Kingdom has been pretty readily available, with only the height of spring break in mid-March and the weeks around Easter in April booking up well in advance. If you peer very closely, you can see the lack of correlation between crowd levels and reservation availability that I talked about.

Looking at May 14 through June 18, that same availability continues into the future. What’s up on May 23? No idea, but it’s clearly the outlier in a sea of availability.

EPCOT has the largest capacity and is usually the last park to sell out. We can see that here; even with Easter’s high crowds only a very few days were sold out in advance.

Whoa! What’s going on here? The rest of May certainly doesn’t match what we saw in the first part of the year. My guess? That’s people who booked reservations in the last two weeks of May hoping to score a preview or soft opening ride on Guardians of the Galaxy Cosmic Rewind. If plans didn’t pan out, availability might open up for some of those dates as they draw closer.

In the early part of the year the pattern of sold out days in Hollywood Studios looks similar to what we saw with Animal Kingdom. One thing that’s interesting is it appears that weekends don’t sell out as fast, and if we go back and look, we can see that for Animal Kingdom too.

The difference in weekend availability is even more obvious here when we look ahead at the next month or so. Pretty much every weekday through the first week in June is unavailable and has been for some time. But the weekends still have reservations on tap.

Mid-March, most of April — by now this pattern should be looking pretty familiar.

Magic Kingdom, like Hollywood Studios, has little availability through early June and hasn’t had it for a while. Except, again, on weekends.

Already missed a reservation you wanted? Plenty of dates do fluctuate in availability. Take a look at the last date reservations were available on the Crowd Calendar; if it was only a day or so in the past then stalking might pay off for you. And don’t forget that if you have Park Hoppers, you can move to any park after 2 p.m., even if you weren’t able to get a reservation for that park in advance.

What’s your experience with the reservation system? How far in advance do you reserve to make sure you get what you want? Let us know in the comments!