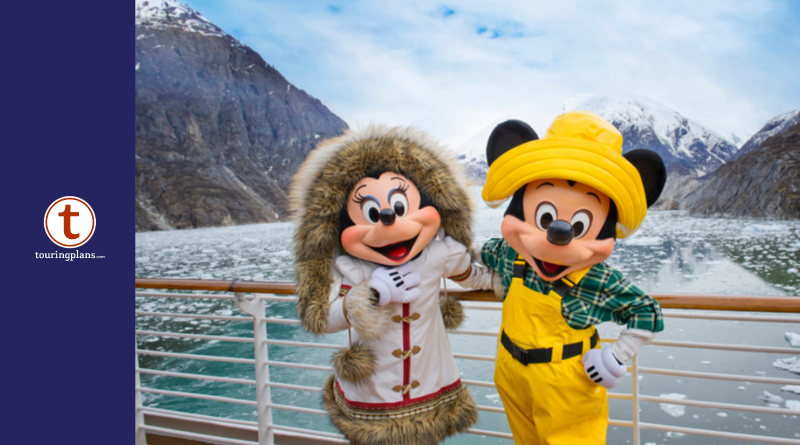 Alaska cruise season is coming up, people!  I myself somehow have two Alaska cruises booked this summer.  I’ve been a few times before, and I can tell you that excursions are a much bigger deal on an Alaskan cruise.  On a Caribbean cruise, typical excursions are beach trips and water activities of some kind.  On an Alaskan cruise, however, there are so many different things to do.  So many fun things to do!  And, I’m not going to lie, they’re often expensive! 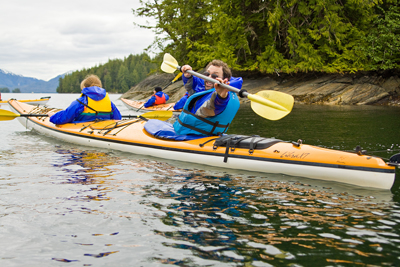 Don’t get me wrong, I’ve done an Alaskan cruise where I didn’t pay for a single excursion.  I walked around town on my own in most ports, and I caught a public bus to the glacier in Juneau.  And it was a great cruise!  But if that was my only Alaskan cruise, I would have paid for some excursions.  If you are ever going to splurge on excursions, Alaska is the place to do it.

Here are 10 of the great excursions that are offered.

1. Whale Watching – To be sure, the first excursion that comes to mind in Alaska is whale watching. Whale watching in Alaska is spectacular. There are official cruise line excursions, and outside companies in just about every Alaskan port.  None of them make promises, but it’s very rare not to have at least one whale encounter on these excursions.  I have two pieces of advice for whale watching.  First, in general, the smaller the ship, the better.  Second, do it.  Whale watching is a must do in Alaska.  Yes, you often see whales from the ship, but being up close and personal is even better. 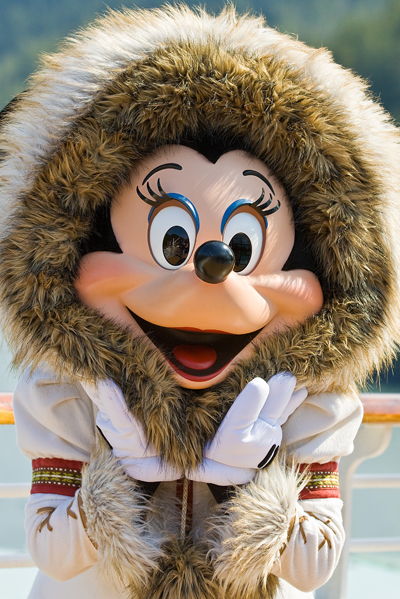 2. Dog Mushing – Dog mushing is also a super popular Alaskan excursion. Be aware, that the vast majority of these excursions aren’t exactly your Cuba Gooding Jr. in Snow Dogs dreams fulfilled. Because Alaskan cruises take place in the summer at lower elevations, you aren’t usually being pulled by dogs on a sled.  You are usually pulled by dogs on something closer to a wheeled cart.  It’s still fun!  And let’s face it, being able to pet the puppies is probably worth the price alone.  Just go into it knowing what it is.  And if you are insistent on sleds and snow, you’ll want to look for an excursion on a glacier or one involving a helicopter trip to a higher elevation.

4. Panning for Gold – Panning for gold is another quintessential Alaska experience. Children in your group, especially, will probably really enjoy it. The ultimate goal of cruise excursions is happy guests, so if you take a gold panning excursion, you will find some amount of gold.  The rivers and troughs where these excursions take place are stocked, and while you won’t get filthy rich, you will find gold.  And after you finish, the gift shops nearby will happily make your gold into some kind of jewelry or other souvenir for you to take home. 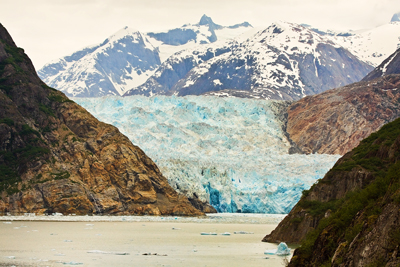 5. Glacier Viewing – You’ll have at least a couple of opportunities to see a glacier on an Alaskan cruise. One of these opportunities is Dawes Glacier. The ship doesn’t dock at Dawes, but, weather permitting, you will get a beautiful view of the glacier from the ship.  Disney is also one of the few cruise lines that has a small boat excursion that launches from the ship with a small group to get a close-up view of the glacier.  How cool is that?  If you are on a 9-night sailing, you will also go to Hubbard Glacier, which is by far the most beautiful glacier I have ever seen.  Glacier Bay had nothing on Hubbard Glacier in my opinion.  You will also get a chance to see the Mendenhall Glacier in Juneau if you like!  The ship does dock in Juneau, and there are ship excursions to the glacier, as well as many outside companies that will be happy to take you there.  Public busses will get you within a half mile or so, and there are several shuttle companies parked outside the pier that will take you there for a fee.  There are excursions that take you to within viewing distance on foot, by water, and by air.  There are even some that will take you onto the glacier itself! 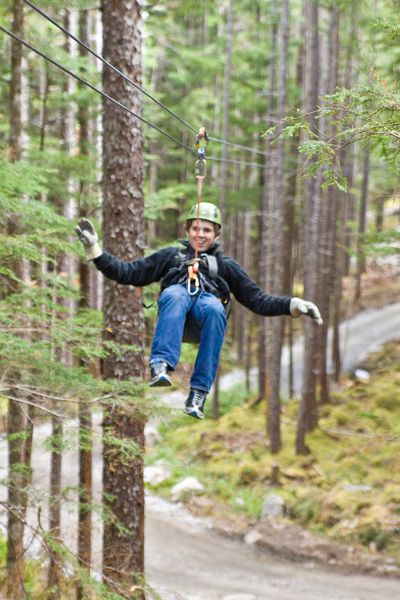 6. Ziplining – There is some great ziplining in Alaska as well! We spent an afternoon ziplining outside of Skagway and all enjoyed it. My advice here is to read the descriptions carefully.  Know how far you will travel to the ziplines.  Some are close, and others are quite far away!  Also, as a general rule, the more ziplines the better.  That’s not always true, some are exceptionally long which is fun, or go over some amazing sights, so it’s worth it to not have as many actual lines.  But if you’ve run out of other things to help you decide, go for more lines!

7. Kayaking – We had a great time kayaking in Ketchikan. We boarded a boat that took us to the kayaks. We started off against a current, and I was worried we were going to all wear ourselves out! But we made it, and going with the current on the way back was heavenly.  Our guides were very patient, and pointed out all kinds of wildlife on the way.  We ended the trip with smoked salmon and snacks on the boat!  We booked with Southeast Sea Kayak, and I would definitely recommend them, although there are several options through the cruise line as well.

8. Train – If you are stopping in Skagway, and most cruises do, you may want to take a trip on the Whitepass Railway! The Whitepass Railway is a beautiful trip up the Yukon Trail. Continuing the day of amazing views, many excursions take you over to the Yukon Suspension Bridge.  You can take the train back, but I’d recommend taking a different route back!  Why see the same views, when you can see new ones?  You can take a motorcoach back with stops for pictures along the way, or you could even ride bikes back!  Whichever you choose, it’s a day well spent, but you will have to bring your passport because you will end up in Canada for part of the trip (but that’s part of the reason it’s cool)! 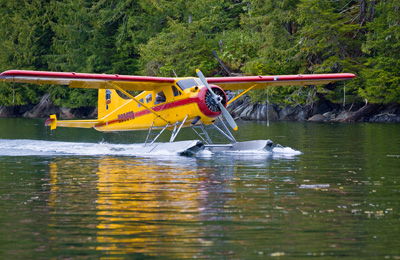 9. Seafood Eating – Did someone say food? Many excursions include food of some kind. If you ever wanted fresh salmon, this is your chance!  Several excursions include a salmon bake of some kind.  There are also several fishing excursions where you can eat what you catch!  The Bering Sea Crab Tour has an option to eat dinner with the crew after a day on the Aleutian Ballad, a ship from the Discovery Channel program, “The Deadliest Catch”.  There are also several excursions that feature a self-described seafood FEAST, or if you aren’t wanting to reach the feasting level, you could choose one with a seafood sampling.  Seafood lovers rejoice!

10. Great Alaska Lumberjack Show – In Ketchikan, one popular activity is the Lumberjack show. You’ll see lots of chopping, log rolling, climbing, sawing, etc. Basically, everything you think a lumberjack would do!  It’s only about a 10-minute walk from the ship, and it is possible to book on your own, although the Disney-exclusive shows include some extra segments or character cameos that you won’t see if you go on your own. 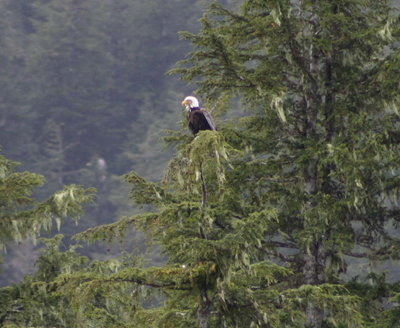 *Bonus – Bear watching in Alaska can be amazing, but is definitely seasonal.  If you want to increase your odds of seeing bears, you will want to visit late in the season when the salmon are running.  We spent about 30 minutes watching a momma bear and two cubs in Juneau near the Mendenhall Glacier.  It was spectacular, but I have to provide the common sense warning that bears are truly wild animals!  Do not be one of those tourists who become the subject of a “Can you believe they did that?!?!” video by not treating bears like the wild beasts they are!

*Bonus Bonus – Eagles!  We also love Bald Eagle watching in Alaska.  And they are everywhere!  Once you start watching for those bright white heads, you may be amazed by how many there are!  It truly is inspiring to see our national symbol all over the place!  ‘Merica!

How about you?  Do you have favorite excursions in Alaska?  Share them with us!