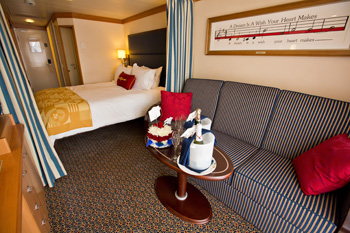 Are you wondering what your stateroom will be like on your Disney cruise?  What does it have, what does it not have?  I am here to help!  Here’s 10 things you may want to know. 1. Stateroom Size – They’re small! No two ways about it, if you are comparing a cruise stateroom to the average hotel room, it’s small. Now if you’re comparing them to a standard room on another cruise line, well then they could be huge! The smallest stateroom on a Disney ship will still sleep 3 people with a queen bed and convertible sofa. On many other cruise lines the standard cabin only sleeps 2. Standard rooms on Disney ships are usually around 25% bigger than standard rooms on other lines.  But we are still talking small here. There are some smaller inside rooms that are 169 square feet, with most rooms running between 204 and 241 square feet. Laurel and Len created an excellent visual of how big (or small) Walt Disney World Resort hotel rooms are when they taped off the size of Disney rooms in their driveway! Value resort rooms are 260 square feet, so they are bigger than a stateroom onboard. So, remember, your Disney cruise stateroom will be small, but you can feel happy knowing you likely have more room than passengers on other cruise lines. And you should by happy because you are on a Disney ship. And who doesn’t feel happy there!?!? 2. Beds – The beds are kind of important, right? Well good news, they’re comfortable! Maybe it’s the gentle sway of the ocean, maybe it’s the $1500 sheets, or the perfect pillows, but I sleep like a baby on a cruise. (Is that really a good analogy? Perhaps not. A baby that sleeps all night. Not a baby that screams every few hours allowing no one else to sleep.) The main bed in all staterooms is a queen bed (they say queen, they feel a little bigger to me) with lots of space underneath for suitcases. Now that the rooms on all four ships have been updated, none of the beds separate into two twins as you find on many other lines. Good news for those that like to sleep in the middle of the bed, bad news for some single travelers. In standard staterooms categories 5-11 on the Wonder and Magic, and 5-7 and 9-11 on the Dream and Fantasy, there is also a couch that converts into a single bed and a single that pulls down from the ceiling in most rooms. Not all rooms have that pull down, so if you are a family of three with a little one that really wants to sleep in the super cool bed that pulls down from the ceiling, make sure you are booked in a stateroom that has one. In categories 8 on the Dream and Fantasy, and 4 on all the ships, there is also a pull down murphy type bed. The couch and pull downs are definitely not as comfortable as the main bed, but I’ve slept in one and they aren’t bad! Concierge staterooms R, S and T have various other configurations sleeping between five and seven people.

3. Bathrooms – Maybe even more important than beds! And I have more good news. The bathrooms are great! They’re small (small rooms remember), but they’re great. On all ships, with the exception of accessible staterooms and category 8A’s on the Dream and Fantasy, everything in categories 4- 10 have split bathrooms. Split bathrooms are genius! A split bathroom means there essentially two bathrooms which is so helpful with multiple people getting ready. One has a sink and toilet, and the other has a sink and tub/shower. You heard me bath loving people, Disney has a tub in their bathrooms. On most other lines, you’ll have to get to the suites before a tub is an option. In categories 8D, 8C, 8B, 4 and V on the Dream and Fantasy, there are actually round tubs! With rainfall shower heads! The V on the Magic and Wonder, and R, S and T on all ships have a whole ‘nother level of bathrooms and tubs. The tub in the 1-bedroom suites on the Dream and Fantasy is more like a small pool. 4. Bath Products – Should you bring your own shampoo? Only if you’re picky! The ships all carry H2O products. In every bathroom you’ll find shampoo, conditioner, soap, body wash, and body lotion. Sometimes there will also be a solar relief gel (which I loooooove) l in concierge and higher categories. I have seen concierge use other brands (like Elemis Spa Products) at times, but they were great as well.

5. Storage – For a small room, it’s surprising how much storage there is! As I mentioned above, there is a lot of space under the bed for suitcases. Then there are two closets with some built in shelves, and a set of drawers and a shelf next to the closet. There are small end table type shelves with small drawers next to the bed. There’s also some space under the desk, as well as steamer trunks in some rooms on the Wonder (though these seem to be disappearing) and a nice dresser where steamer trunks used to be in some rooms. The Dream and Fantasy also have coffee tables that open up for even more storage! And finally there’s a desk with drawers and some cabinets over that. As with some of the other items, concierge rooms have even more storage space than normal rooms. 6. Closet – Inside the closets you will find some shelves and hanging space as mentioned above, as well as a couple of other things. One is the safe for your room. It’s a good size for wallets, passports and other valuables. We never seem to have enough hangers, but your stateroom host/hostess will gladly bring you more. You will also find a laundry bag and price list for laundry or dry cleaning. It’s not listed, but pressing is half the price of cleaning. Disney does not allow irons or steamers in the staterooms so this is a great time saver if you don’t want to go to the public laundry rooms to iron. Just put your clothes inside the bag, mark what you want done and hang them outside your room! You’ll also find your life jackets stored in your closet. It’s a good idea to check to make sure you have the correct number inside.

7. Desk – You’d probably like to know what is in your desk too! There are actually some handy things. There are hair dryers in the drawers so you don’t have to bring your own! For anyone that hates the vacuum cleaner type hairdryers in the bathrooms on the Magic and Wonder, they now also have hairdryers in the desk. In one of the drawers you’ll also find stationary, postcards, a pen, and room service menus. The room service menu is hidden rather well inside the large Disney Cruise Line book. The room service menu for breakfast foods is also in the drawer, but it’s printed on some paper door hangers. If you would like room service breakfast any night but the last night, you use this order form and hang it outside your door the night before. On top of the desk you will also find your Wave Phones if you use them. Underneath one side of the desk you will also find a small refrigerator. 8. Plugs – Good news, Disney learned from the Magic and Wonder’s lack of plugs and added a few more. The Magic added more in Dry Dock as well. Don’t get me wrong, it’s not like they’re all over, but there are a few more these days! Disney has banned power strips, but bringing something like a multi-port USB charger usually helps us immensely. When you’re traveling with three adults and a teenager, USB chargers are like gold.

9. Television – There are nice televisions in all the rooms, on all the ships. Some of the concierge rooms have three! They are all similar, but they are different based on which ship you are on. On the Magic and Wonder there are several channels, a few of which have Disney movies and new(ish) releases playing all day long. There’s also a view from the bridge, and an information channel showing where you’ve been, where you’re going, what’s the weather, etc. You’ll also find some popular network channels like ESPN, CNN, the Disney Channel and ABC when they are available. On the Dream and Fantasy, the TV’s have more features added, like an excellent selection of On-Demand Movies. There’s a channel with just about every Disney or Pixar animated movie ever made, a channel with new releases (I may or may not have watched Jurassic World through about 6 times in October onboard the Dream) and a channel of classics. The beauty of On Demand is that you can start and stop the movies every time you’re in the room. I don’t think we’re doing it right if we don’t have a Disney movie (Jurassic World totally counted) playing at all times when we are in our room and awake. You can also view your bill on your TV on the Dream and Fantasy, although it’s glitchy at times. 10. Privacy Curtain – The good news for parents whose children won’t sleep if they can see them is that there is a curtain that can be closed separating the main bed from the rest of the room. It’s great when one side of the room wants to go to sleep and the other isn’t ready. Not as great as having two rooms, but a workable alternative!

What did I forget? Is there anything else you’d like to know about your stateroom?