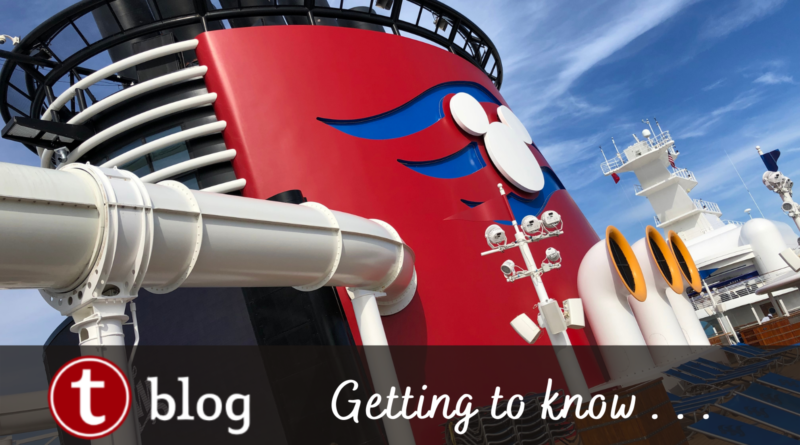 Disney Cruise Line’s newest ship, the Wish, is now in regular service, sailing a full slate of three and four night Bahamian itineraries out of Port Canaveral. This means that Disney fans now have five options to choose from for cruise vacations rather than the previous four.

The Wish has many wonderful qualities, and more than a few characteristics that have me scratching my head. For DCL veterans, here are some of the things you might notice that a different between the Wish and her older sisters – the Dream, Fantasy, Wonder, and Magic.

1. Some stateroom features are slightly different.

If you’ve been on the other DCL ships, the staterooms on the Wish will feel familiar. Most stateroom classifications have a queen-sized bed; one to three twin-sized beds that fold out from the couch, ceiling or wall; a closet; a desk area; and a split bathroom with the shower in one compartment and the toilet in another.

Some things that are different are:

2. Some sports areas are indoors rather than outdoors.

On the first four DCL ships, many of the recreational activities take place on an open outdoor deck, making things like pick-up basketball or even ping-pong inaccessible in poor weather. On the Wish, these activities take place in an enclosed multi-purpose room called The Hero Zone. The Hero Zone can be configured for half-court basketball, for mat-based activities such as chip-it golf or Jack Jack’s Diaper Dash, or for a new DCL activity – the Incredi-Games inflatable obstacle course. All these activities can now happen regardless of the weather. 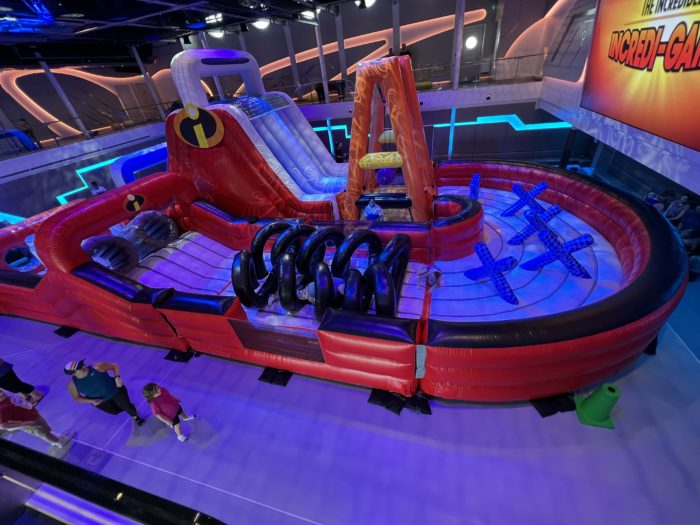 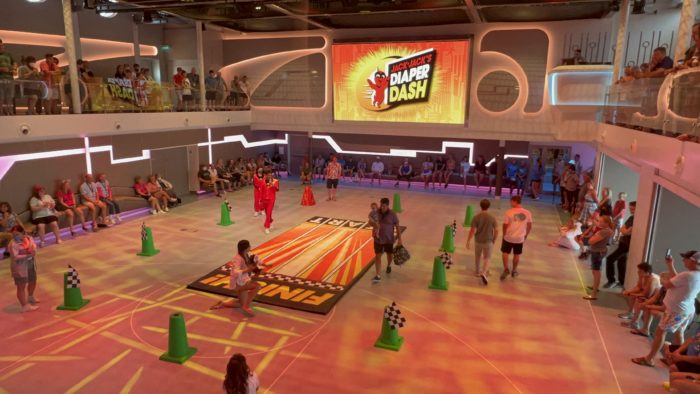 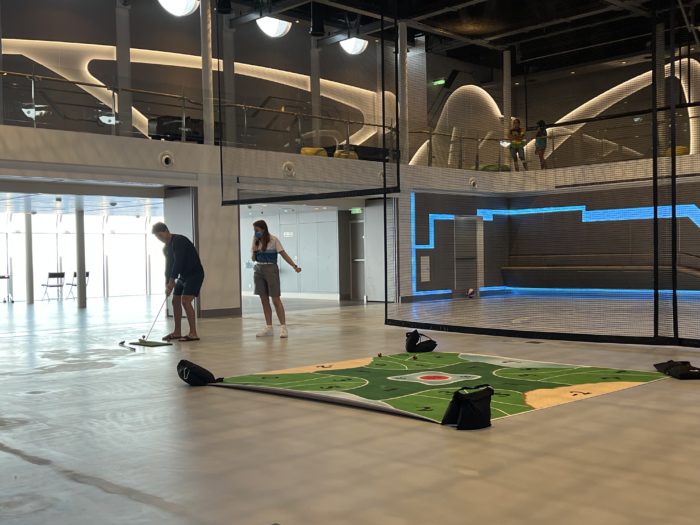 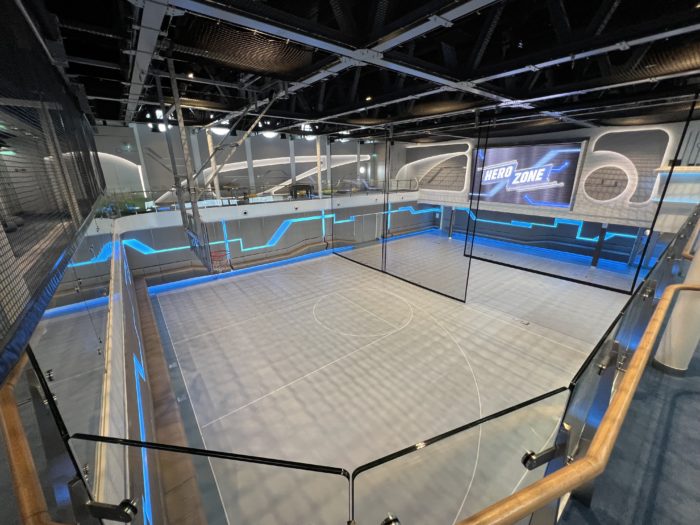 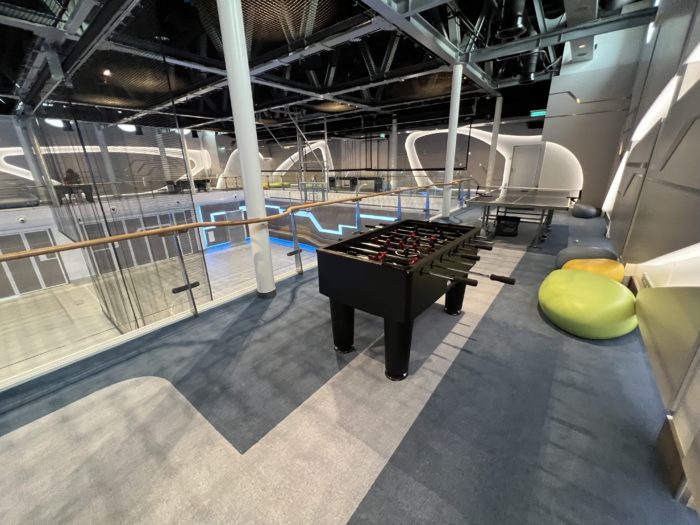 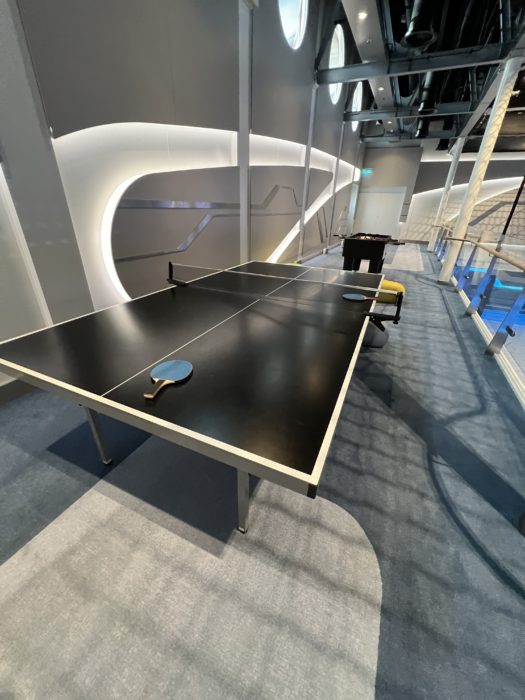 3. There are lots more places to get fancy coffee.

On the first four Disney ships, you can get fancy coffees at one or two places on the ship. DCL has added machines capable of making lattes, cappuccinos, and the like to more locations on the ship. You can indulge your caffeine addiction at Cove Cafe (deck 12 aft), Enchanted Sword Cafe (Deck 5 midship), Wishing Star Cafe (Deck 4 midship), Marceline Market Cafe (Deck 11 aft), the Bayou (Deck 3 midship), and probably a few places I’ve forgotten.

4. There is no walking track around the ship.

One of the more baffling design choices on the Wish is the lack of the full walking/running track around the exterior of the ship that is part of the original four DCL ships. Instead of being able to take a stroll around the perimeter of deck 4, you have to take steep stairs on either side of the deck to get around the outside of the ship. During several times of the day, we found that the stairs were inaccessible because they were behind a bolted gate.

The Oceaneer Club on the Wish consist of five areas. At Marvel Super Hero Academy, young “recruits” train to be the next generation of superheroes with help from Marvel favorites like Spider-Man, Black Panther, Ant-Man, and The Wasp. Fairytale Hall is a trio of Disney princess–themed activity rooms. Walt Disney Imagineering Lab is space for kids to discover the secrets of Disney Imagineers with hands-on activities and experiments. New Adventures at Star Wars: Cargo Bay teachs kids to be “creature handlers” as they manage and care for exotic beings from all corners of the galaxy, including Porgs, Loth-cats, and Worrts. The fifth area, Mickey and Minnie’s Captain’s Deck, is a playground-like area designed for the youngest Oceaneer guests. The space includes nautically themed slides, crawl-throughs, busy boxes, and other interactive and physical activities.

6. There are two new mainstage shows.

There are three mainstage shows that will rotate in the Wish’s version of the Walt Disney Theater: Aladdin, Seas the Adventure, and The Little Mermaid. Aladdin is a repeat of the show that’s now running on the Fantasy.

Seas the Adventure is a jukebox style musical revue of classic Disney songs. The story, such as it is, involves Captain Minnie letting Goofy take the helm of the ship. Needless to say, gentle mayhem ensues. With an assist from Tinker Bell, Goofy sails through scenes from the canon of Disney classics. Among the songs you’ll hear are “Go with the Flow” from the Finding Nemo stage show, “Into the Unknown” from Frozen 2, and “Almost There” from Princess and the Frog. DCL has resisted their typical turn toward the maudlin and the overall vibe of this show is upbeat and silly. We left the theater in a great mood.

I was a little less enthusiastic about the Wish rendition of the Little Mermaid tale. The vocals were good, but I had trouble getting past some of the staging elements that were served with more than the usual amount of Disney cheese. Cast members entered the stage clad in costumes that would be equally at home during a 1970s community theater production of Godspell – lots of flowing harem pants and ombre silk scarves. As the show progresses, cast members pull additional costume elements, props, and puppets out of a giant onstage treasure chest, adding to the “let’s put on a show” ethos of the production. The mermaid characters, including Ariel, are clad in dresses that stop mid-calf, fully exposing their legs and feet – an odd choice for a character whose entire raison d’etre is to acquire human appendages.

Modifications to the story’s text included lines about climate change, conservation, and consent. I am strongly supportive of these messages in other contexts, but, in my opinion, these clumsily shoehorned PSAs give a less than buoyant tone to the festivities.

There are some bright moments: the performers are hard-working and talented. Crabby Sebastian steals the show. And, as with all Disney’s live renditions of this tale, bubbles inevitably fall from the sky. The end is happily ever after, but you have to swim through some murky waters to get there. 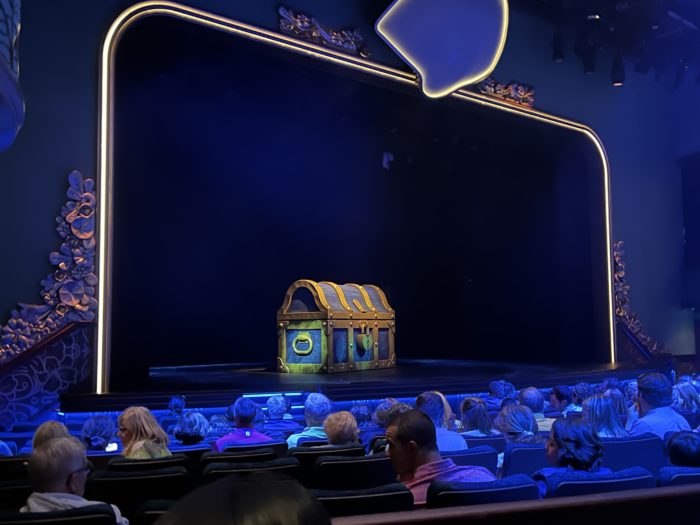 On the first four ships, each stateroom door is marked by a small figurine of sea life – either a fish or a seahorse. The figurine is set back from the wall a few millimeters and serves as a shelf for small papers or to display a Secret-Santa-like “fish extender.”

On the Wish, there are some door figures shaped like a Nautilus shell (keeping in the realm of sea life), but others are shaped like Cinderella’s carriage, an owl, a sun, or for a handful of suites – a crown.

Given the array of images here, some folks are now calling the Secret Santa game “Wish extender” rather than “fish extender.” I’m curious about whether this new terminology will spread to the other ships. 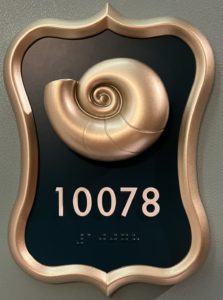 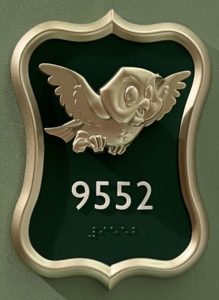 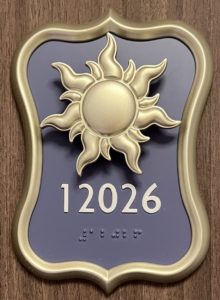 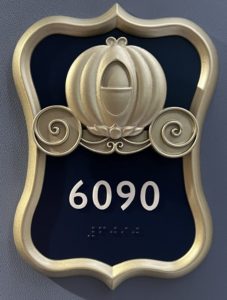 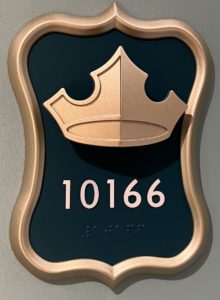 8. There are no trays at the buffet.

The Wish’s pool deck buffet is called Marceline Market, but it’s so much like the Cabanas buffet on the other ships that my daughter and I ended up calling it Cabanas as a form of shorthand. Rather than self-service, at each station cast members serve you whatever you’d like to eat and hand you a plate with your choice. The food is excellent, you’ll want to try items from every station. But, unfortunately, there are no trays. So if you want to eat, say, eggs, fruit, and a croissant, you’ll end up with three different plates and no elegant way to carry them. If you’re a parent alone with several children, you’ll be balancing even more. Cast members can help, but you’ll have to ask.

New plates at every station: 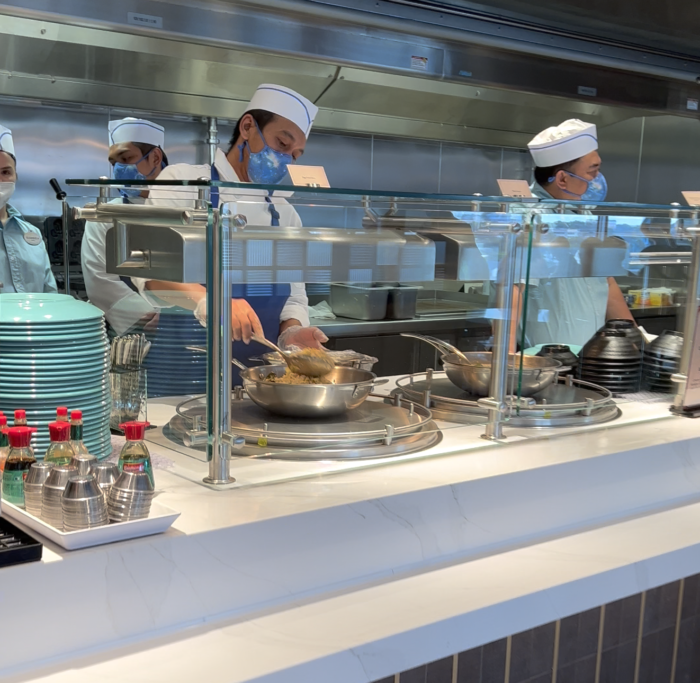 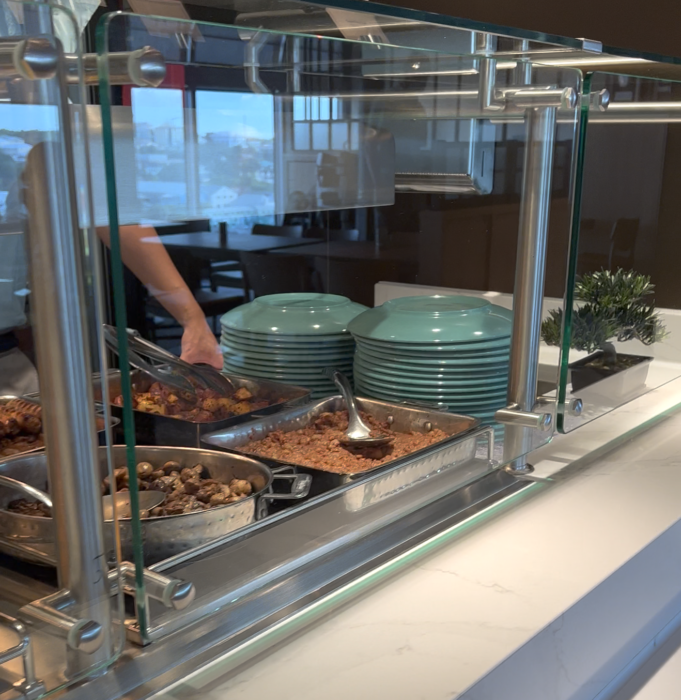 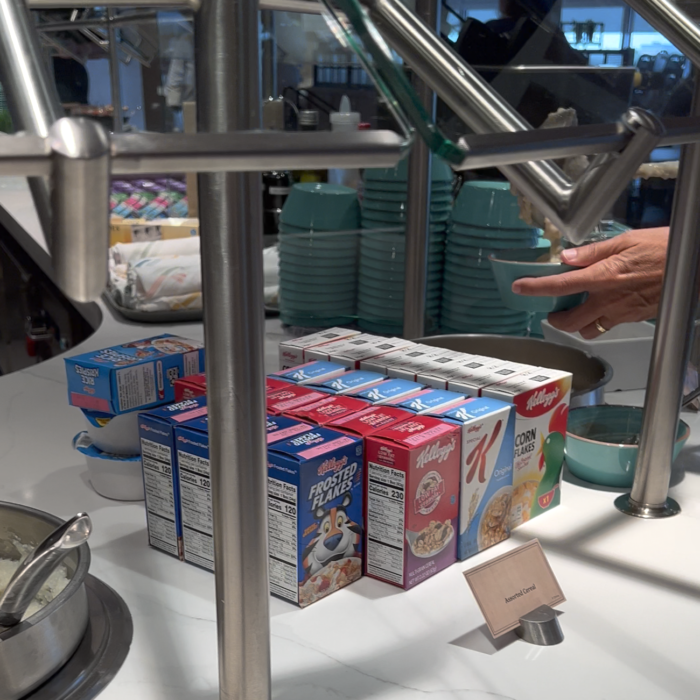 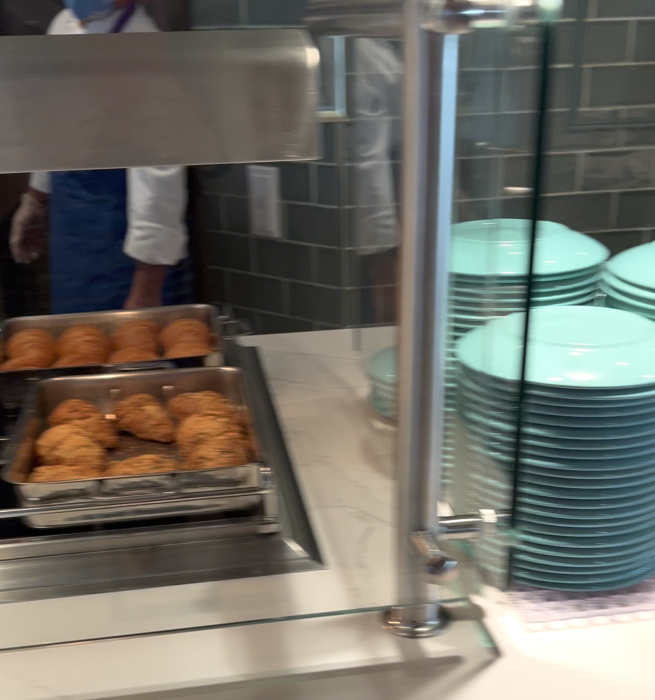 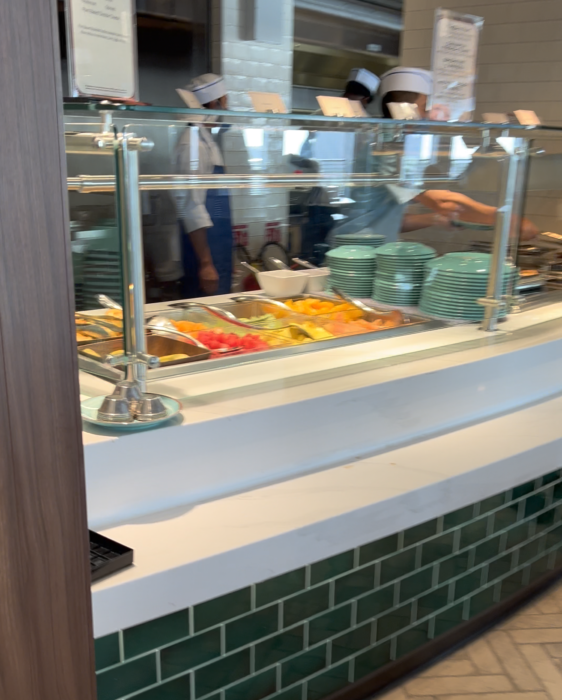 9. Several spaces are split in two.

Several places that exist as single spaces on the other DCL ships are bisected on the Wish. Rather than one movie theater, there are two smaller theaters. Rather than having one salon, there are separate spaces for men and women. One of the main dining rooms, 1923 is separated into two halves: the Roy Disney room and the Walt Disney room.

These divisions don’t appreciably impact the guest experience, but it does mean you might have to work a bit harder to figure out where you’re going. If you’re meeting family members at the theater, you’ll have to specify which one.

10. There is more Star Wars onboard the Wish than other ships, but not as much as you might want there to be.

The Dream and Fantasy each have a small Star Wars area in their kids’ clubs. The Star Wars room at the Wish Oceaneer Club is significantly larger than on the other ships (photo above), with more interactive elements. This space can be used by adults during open house hours and is used for Star Wars character meet & greet opportunities.

Additionally, the Wish has the Hyperspace Lounge, a Star Wars themed bar. The centerpiece of the bar is a giant “window” screen that changes every 7 minutes or so, leaping through hyperspace and stopping in a different planetary world each time.

Disney discontinued its Star Wars Day at Sea sailings, likely to push Star Wars fans to book the Wish. Other than the window screen, Hyperspace Lounge is not as highly themed as Oga’s Cantina at the Disney theme parks. The drinks are fun, but when I sailed, the cast members weren’t doing anything special in the bar – there was no discernible backstory or patter related to space. Without Star Wars Day at Sea as an option, I’d love to see Hyperspace Lounge given a little more oomph.

Stay tuned for more coverage of the Wish coming soon.