“I’m sorry. We don’t have a reservation under that name at this resort or any other Disney resort.”  This was the rocky start to my relationship with Disney’s All-Star Music Resort.  Baffled and sent away with my tail tucked between my legs, I found a seat in the lobby.  I needed wifi to pull up my confirmation email (which admittedly I should have already had with me), but I quickly learned there was no wifi anywhere.  I waited in the check-in line a second time to inquire about getting an internet connection but was told this was only available for an extra fee with (wait for it). . . a room reservation.  Sent away with my tail tucked between my legs for a second time, I spent some time seeking wifi and tracking down my confirmation email.

Once I was armed with the proof that my clan did, indeed, have the right to occupy one of the resort’s family suites, I waited in the check-in line for a third time.  The reservation was found under my last name with an incorrect spelling.  I was relieved–that is until I was told I needed to pay the balance on the room.  “This room should have already been paid for,” I explained to the lady behind the counter.  She pleasantly explained that the first night had been paid off but not the second, and I was bewildered when she asked if I would please hand over my credit card for the $300 per night charge. I was certain it had already been covered.  However, I thought it over for a few seconds and considered the fact that if I had to wait in that check-in line one more time I might hang myself.  With that visual in mind, I gave the woman my sparkling Disney Visa.  The matter would have to be figured out later as my family needed accommodations, and I knew we would not be able to find another room easily on the holiday weekend.

The papers were signed, and I was told that the room was available immediately.  Dragging my luggage and family of five along, I approached and opened the door to our suite on the second floor.  Bam! The intense smell of chlorine bleach hit me like a Mac truck.  “Whoa!” I exclaimed, “Back up! No children may enter here yet!”  My kids were tired. They were sweating. They were irritable, but there was no way I would let them in the room.  I reasoned that mild perspiration never hurt anyone; however, inhaling chlorine bleach had, and I made them wait out on the balcony while I did my best to air out the room.

After a few minutes with the door held open, the smell abated enough for everyone to enter.  This was when the course of our experience changed.  Everyone “ooohed and ahhhhed” as we inspected our temporary digs.  A living room featured a TV, table, a couple dining chairs, hidden beds in the sofa, stuffed chair, and ottoman.  It was simply but tastefully accented with a musical theme.  Equally simple and yet completely practical was a kitchenette with cabinets, sink, mini fridge, and microwave.  Around a corner was separate bedroom with TV, queen bed, and desk.  But clearly my favorite amenity was the set-up of two separate bathrooms, something of which even some DVC accommodations don’t boast.  We immediately felt quite comfortable in its crisp and clean atmosphere. When I ventured out to the food court after settling in our quarters, it impressed me as just as clever.  It had separate stations such as a bakery, a grill, a pizzeria, an ice cream counter, waffle station, and beverage island.  The service was quick and efficient.  I sampled a burger and fries from the grill and sat amongst the colorful murals and posters of music celebrities in the court. It was a pleasant half hour for me.  My little ones colored at a strategically placed table that was stocked with coloring sheets and crayons .  I sat peacefully nearby and watched “Sonny With A Chance” on a mounted flat screen TV and finished my fries in peace. “The grounds are somewhat eclectic and charming,” I noted when I scouted the area.  As with every Value Resort, All-Star Music was dotted with garish structures establishing its theme.  This style always creates a playful and energetic setting for families; however, hidden between the vivid musical monuments I found a rather serene environment–a fenced in rose garden with benches and a fountain.  Had I sought out relaxation, this would have been my area of choice.  But alas, relaxing is not my strong point when at Walt Disney World, and my family sought out action in these stomping grounds. We followed the action trail to a central location of the resort.  Here we found the primary attraction of All-Star Music–the pools.  My family spent a large amount of time at the main pool on both days we were there.  The unique guitar shape of the pool along with the water gun-shooting Three Caballeros fountain in the center drew my kids like a Pooh Bear to the hunny pot. Imagine our enthusiasm when we discovered that pool parties were a daily event with energetic DJs and a nightly pool-side movie.  It is no surprise that this became the hot spot for the Knopps, and my kids returned from these pool events with bright smiles and tired eyes. When our troop finally checked out of the family suite of Disney’s All-Star Music Resort, I conceded that it had been a great experience once we were actually permitted to set up camp.  The price seemed a bit steep, but being a large family who had need for some kitchen space, the cost was possibly justified.  Also, the second bathroom was appreciated on more than one occasion.  After all when you have young ones that “gotta go” at the same time, no mom wants to be praying that one can “hold it” while the other is lolly-gagging on the latrine.  With this arrangement we found ample places for everyone to be “relieved” as well as get ready to go without standing on top of one another.  In addition to that, the resort pool activities did create some wonderful family moments for which there was no price tag.  For my family with three younger children, it seemed a fantastic place to establish home base while running around the Walt Disney World Resort. 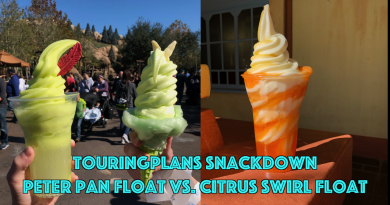 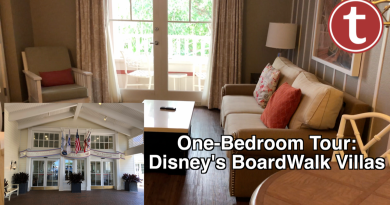