2019 NOTE — THE INFORMATION IN THIS POST IS NOW OUTDATED. SEE OUR MORE RECENT POST ABOUT DISNEY WORLD LOCKERS FOR CURRENT INFORMATION.

And just in case you’re a “just in case” person, here are the answers to your all your burning Disney locker-related questions.

Where are there lockers at Walt Disney World?

Will I need to use a locker at the theme parks?

This depends on your touring style. Personally, I rent a locker during maybe one out of five times that I visit the parks. Here are some reasons why you might want a theme park locker:

What size are the lockers at the theme parks?

How much do these lockers cost?

That seems a little steep. Is there any way to save money on a locker rental?

Possibly, I’ll get to that in a minute.

What are the specific locker locations at each park?

The locker locations are noted on the park maps, but here’s where you should be looking:

What are the locker hours?

They’re the same as the theme park hours, plus any Extra Magic or party hours. Locker keys must be returned within an hour after the final park closing time or the key deposit will be forfeited.

Can go in and out of my locker several times a day?

Yes, the in-park, key-operated lockers can be accessed as often as you like/need during the day.

What happens if I’m visiting more than one park per day? Do I have pay the locker fee twice?

No. When you’re leaving the first park, return your locker key in the same place where you obtained it. The cast member attendant will return your $5.00 key fee and can issue you a receipt.

At the second park, present the receipt and pay a new $5.00 key fee and you’ll be given a locker for that park.

Again, when you’re leaving, return your key and you’ll get your $5.00 back.

If I’m going to the same park two days in a row, can I leave something in the locker overnight?

Unfortunately not. The lockers are cleaned out every night. Depending on the locker contents, items left at the end of the day will either be trashed or sent to lost and found.

Are the lockers handicapped accessible?

Yes, many of the lower level lockers are marked with a wheelchair symbol and are set aside for guests using mobility devices.

You mentioned something earlier about saving money on lockers. What was that all about?

There are coin-operated lockers outside the park gates at Epcot (near the bus stop), Animal Kingdom (near the restrooms on the right BEFORE the entrance turnstiles), and Disney’s Hollywood Studios (just before the bus stop). These coin-operated lockers only cost a dollar (in the form of four quarters). The catch is that they cost a dollar every time you open the locker. Still, most folk won’t go in/out of their locker more than seven times per day, so there likely will be savings.

Why wouldn’t everyone do that?

Well, every time you leave the park, you have to go through security and the turnstiles again. During crowded times of the year, this could be fairly time consuming.

How big are the outside-the-park lockers?

They’re really quite big – 29″ deep x 23″ high x 16″ wide. My 10-year-old daughters fit inside with room to spare. However, I’m not recommending this as a place to store unruly children 🙂

If you have luggage to store, this is a good option.

I remember seeing a sign near the outside-the-park lockers at DHS that says “luggage lockers.” Can I store luggage there?

The dimensions of these lockers is 22″ deep x 12″ wide x 17″ high. Airline rules may vary, but a typical maximum carry-on suitcase size is 22″ x 9″ X 14″. If you’re following the letter of the law, then your carry-on will likely fit, but if you’re fudging, then you may be in trouble.

If my carry-on bag will fit into a large locker INSIDE the park, can I store it there?

Maybe. There is a prohibition against bringing wheeled suitcases into the theme parks. If you explain to the cast member at the turnstiles that you’re going to bring your suitcase directly to the lockers, they may let you do this, but no promises.

Any other options besides Epcot for large luggage locker storage?

There are also large luggage lockers located at the Transportation and Ticket Center near the Magic Kingdom parking lot. These are the same 29″ x 23″ x 16″ size as the Epcot luggage lockers. They also cost $1.00 (as four quarters) per locker opening.

What reason would I have to store luggage at a theme park?

First let me tell you why you wouldn’t need to store luggage at a theme park.

Possible reasons why you might have your luggage at the theme park are:

Are lockers readily available at the theme parks?

Generally, yes; however, at the busiest times of the year, it is possible that they may run out of lockers or run out of the particular size locker that you need. If you absolutely need a locker, rent it early in the day.

In my experience, the outside-the-park lockers have much greater availability.

There are lockers at Downtown Disney?

Yes, in two locations: in the Marketplace near Cap’n Jack’s Restaurant and near the Marina rental window. These are 17″ x 9″ x 16″ and cost $1.00 (four quarters) per locker opening.

What’s up with lockers at the water parks?

I’m renting a boat/jetski at the Contemporary, what do I do with my belongings that I don’t want to get wet?

The hotels that have marinas also have coin operated lockers (four quarters) near by. Some of the resort pools also have this feature.

I’m going on the Wild Africa Trek at the Animal Kingdom. I don’t want to bring all my belongings on the Trek, should I rent a locker near the park entrance?

No need to do this. There are special lockers just for Wild Africa Trekkers. There is no additional charge for these. You Trek guides will show you where they are when you check in for your adventure.

Are my belongings safe in the Disney lockers?

I’ve never personally heard of anything being stolen from a Disney parks locker. However, they are lockers, not Fort Knox. You should plan to keep irreplaceable or valuable items on your person. This includes your wallet, cameras, and other electronics. Better yet, bring the bare minimum of valuables with you to the parks and leave the rest in the safe back at the hotel.

I’ve seen some teeny mailbox-like lockers at some of the parks. What are those?

At the Magic Kingdom, Disney’s Hollywood Studios, and the Epcot International Gateway there are small lockers (4″ x 3″ x 5″) outside the park that do indeed look like the mailboxes you’d find in an apartment building. These cost $.50 (two quarters) per opening.

To me, they look like the kind of place where you could leave a ticket for a party member who was joining you late. However, the lockers cannot be opened without the key, so that wouldn’t work.

I’ve never personally seen anyone use these mini-lockers. The only reason I can think of that you would do so is if you wanted to temporarily store something small that is not permitted in the parks, such as a glass container or pocket knife.

So fellow sherpas, do you carry all your gear with you in the parks? Do you rent lockers on a regular basis? Why or why not? Let us know in the comments below.

UPDATE 2013: There are no longer luggage lockers at the Transportation and Ticket Center. 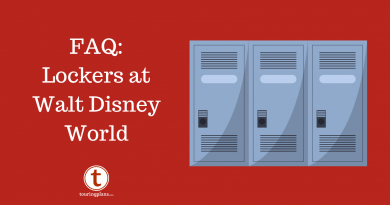 23 thoughts on “Storing Your Stuff at the Disney World Parks: the Wonderful World of Lockers”