This week’s SATURDAY SIX looks at the Top Six Reasons We Loved Universal’s 2013 Holiday Celebrations. While Universal’s Halloween Horror Nights (HHN) has become the premier Halloween event in Orlando, many people don’t realize that Universal’s Christmas offerings are pretty good, as well. Disney raises a high bar with Mickey’s Very Merry Christmas Party and the Osborne Family’s Spectacle of Dancing Lights, but Universal’s offerings of Grinchmas in Islands of Adventure and Macy’s Holiday Parade in Universal Studios Florida are two unique events which – unlike HHN – can be enjoyed by the entire family.

Grinchmas transforms Seuss Landing in IOA in almost every way possible, with new characters appearing within the area, a new stage show, and decorations seemingly on everything (and we mean everything). Meanwhile, USF displays gigantic balloons throughout the park, has several incredible musical offerings, and delivers the goods with the signature Macy’s Holiday Parade. There is a lot of stuff to choose from, but today we’re going to narrow the list down and look at our six favorite things from this year’s holiday celebration.

(Remember, you can click on any picture to see it in full size.)

This was a true surprise for me. I’ll admit that I’m not the biggest fan of the regular Blues Brothers show on Delancey street. I realize I’m in the minority on that one, and while I generally enjoy Dan Ackroyd and John Belushi as performers, their Blues Brothers film does nothing for me. The regular version of the Blues Brothers show uses music from the film, including renditions of “Gimmie Some Lovin’,” “Jailhouse Rock,” and Aretha Franklin’s “Respect.” Not my cup of tea. However, Christmas music is something I can’t get enough of. I’m the type of person who has the radio in my car set to the station that plays nothing but Christmas songs in December, and I often put my television on the music channel playing Christmas music as background noise when I am home. The Blues Brothers playing Christmas songs? I’m open to that.

There is a pre-show with a saxophonist and a singer doing a great version of “All I Want For Christmas” before the Blues Brothers arrive. Jake and Elwood then get on the stage and sing “Santa Claus Rock,” “Run Run Rudolph,” “Blue Christmas,” “Snow Man” (a holiday take on their classic “Soul Man” song from the film), and the show finishes with “Santa Claus is Coming to Town.” There are several spots where the two interact with the audience, but my favorite part may be the Christmas tree that Jake creates onstage. Using cigarette packs as ornaments, toilet paper as garland, and an empty can of Pabst Blue Ribbon as a tree topper, Jake creates the greatest Christmas tree this side of Charlie Brown.

I thought the show was fantastic across the board. The music was great. The person playing Elwood Blues nailed it, looking and sounding just like Dan Ackroyd from the movie. While the Jake character was a little thin, his performance was off-the-charts. There is a lot of humor throughout the show, including a great moment where the two give each other sunglasses as a Christmas gift and another when Jake comes out dressed as Santa carrying a laundry bag from the Joliet Prison filled with “gifts,” including a toaster. Overall, this was one of my all time favorite shows at USF, only ranking behind Bill and Ted’s Excellent Halloween Adventure at Halloween Horror Nights.

They say bigger is better, and USF puts that to the test with giant balloons all around the park, even outside the front gate! Scooby Doo, Horton (from Horton Hears a Who), Garfield, Grover (from Sesame Street), and The Cat in the Hat are among the GIGANTIC balloons spread throughout the park. It’s one thing seeing these incredibly large balloons float by you in a parade (or on TV), but standing next to them allows you to see just how outrageously large they are.

There are also holiday decorations everywhere you walk, on almost all of the buildings and light posts, including inside the restaurants and gift shops, and even on vehicles like the Simpsons RV that is used for meet and greets. The humongous Christmas tree by Gramercy park is absolutely gorgeous, and there is also a good amount of Christmas themed merchandise throughout the park, including a Despicable Me shirt that has Minions writing a letter that starts off with, “Santa, let me explain…”

The Grinch will talk your ear off complaining about all the Whos in Whoville and bring up his faithful dog Max, but most of all he loves talking about himself. Think of the hilariously vain Gaston character in New Fantasyland with a real dark side. I can not recommend meeting the Grinch enough, as the character actors Universal has playing the role are truly exceptional. If character meet and greets were judged like rides, the Grinch is a clear E-Ticket.

Playing at the Music Plaza Stage (in front of Hollywood Rip Ride Rockit) is one of the all time biggest acts when it comes to Christmas music. Mannheim Steamroller has two different touring lineups, but the one playing at Universal is led by Chip Davis, the founder of the group. While you may not know Mannheim Steamroller by name, you’ve surely heard several of their popular songs, including “Carol of the Bells.”

Like the popular acts that play during Universal’s Summer Concert Series, guests will plant themselves in front of the stage hours before showtime. What’s different is the age group, as the average person staking out a place for Mannheim Steamroller is between 30-50. Mannheim seems to bring a lot of locals to the park, so be prepared to listen from a distance if you don’t want to camp out in front of the stage. It’s well worth the wait.

Taking place in Soundstage 20 (the queue begins right past One Fish, Two Fish, Red Fish, Blue Fish) is the Grinchmas Who-liday Spectacular. A fun take on the Grinch story, this stage show is almost a hybrid between the cartoon version of the Grinch and the high budget Hollywood version. While the Grinch, himself, steals the show (shocking, I know), it is pretty cool being able to see the various Whos of Whoville in all their glory. Another highlight is the character of Max, which is played by a real dog and is always a big hit. This is tremendous theme park stage show that ranks right up there with the best Disney has to offer. Every year on Thanksgiving morning, my family and I sit down to watch the Macy’s Thanksgiving Day Parade. It’s the unofficial start of the Christmas season for us, and we look forward to seeing the various floats, music acts, and – of course – the huge balloon characters. Universal recreates the Macy’s parade inside the theme park in stunning fashion. Guests can even volunteer to be balloon handlers (you need to be at least 18 years of age, over 125 pounds, at least 48 inches in height, and wearing closed toe shoes).

Like Mickey’s Once Upon a Christmastime Parade there are a whole bunch of walk around characters during the entire parade. Snowmen, people dressed up as Christmas ornaments, and stilt walkers are some of the various people you’ll see walking by. Marching band? Check. Characters that you see around USF like Marilyn Monroe and The Simpsons? Check. Rockette-like dancers? It’s all here. On top of all the ballyhoo comes the balloons (just watching the handlers walking the balloon is an interesting visual), and you can’t have a holiday parade end without an appearance by the big red man himself, Santa Claus.

So there you have it: the top six reasons we loved Universal’s 2013 Holiday Celebrations. See you next weekend for the latest edition of the Saturday Six. If you had fun, be sure to check out The Magic, The Memories, and Merch! articles or, for your listening pleasure, check out Pardon the Pixie Dust podcast.

Special thanks to Seth Kubersky, Nick Exley, and Universal NOW!’s Brandon Glover for their assistance with this article 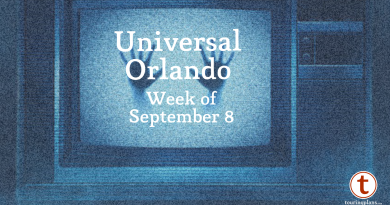