Sugar. Sweet treats are made of this. There are times when it seems to me the whole of Walt Disney World itself was made of it. A word of caution; however inviting the great wall of honey at The Many Adventures of Winnie the Pooh may appear, please don’t lick it. Sure, it may seem like a good idea, but there are plenty of better options available, and besides, it’s not really all that sweet. If anything, the flavor hints faintly of grime and germs. If that’s your idea of a treat, who am I to disagree?

Finding something sweet to eat at Walt Disney World is not a difficult task, but it can be daunting if you’re intent on finding that perfect treat. I’ve traveled Disney World and the Seven Seas Lagoon and the sheer volume of goodies on offer is overwhelming, to be sure. In my explorations, I’ve found that pretty much everybody is searching for something sweet.They’ve certainly come to the right place. One need not take more than a few steps in any park without spying some tantalizing confection in the quivering hand of a giddy park guest, or from a myriad of cleverly-disguised gingerbread houses beckoning you to come inside. Fortunately, whether you discover that special goody, or wicked witch, your sweet tooth can take comfort in knowing that even the least-inspiring treat still packs enough sweet to satisfy it. Treats are something Disney does well, even those times when they don’t especially.

It seems I always start at Sleepy Hollow Refreshments. That’s probably because it is my first treat of the day, and often my only one. The Funnel Cake, even when coated in a snowy layer of powdered sugar, isn’t the sweetest treat on my list, and that may be why it’s one of my favorites. I’m convinced some treats want to use you for their own amusements, turning you wrong-side out with their amplified sweetness. This snack, however, isn’t one of them. Additionally, it’s large enough for two people to share, while you rest and recuperate from a hard morning’s Tour or, as a reward for surviving the morning’s harrowingly happy rope drop.

For the “health conscious,” Sleepy Hollow also offers the Nutella and Fruit Waffle Sandwich, although you may think of this more as breakfast. Just about anything, however, is a treat with Nutella on it, except perhaps Stitch’s Great Escape. First of all, they won’t let you take it on the attraction, and second . . .. Still, as breakfasts go, it’s better for you than Smarties cereal.

Some treats want to be used by you in a desperate attempt for approval. It’s not exactly fair to call the cloyingly cute Kitchen Sink at Plaza Ice Cream Parlor on Main Street a treat or a snack. This thing is more of a meal. Granted, it’s a meal only if your four food groups consist of the fruit, whipped, sauce, and of course, sugar groups. If that’s the case, then you will certainly get your daily allowance here. My wife calls it the “Cutie-patootie Mickey Pants” which has a certain ring to it, although after a long day at the park, that ring may be coming from ears filled with chocolate and whipped cream. It was definitely not looking so cute by the time we neared the end, although I was starting to feel a little “patootie.”

There is some controversy over the Cinnamon Roll at Gaston’s Tavern. It’s more or less the same cinnamon roll you used to get at the Main Street Bakery, but now with a maple glaze, which is incidentally the way I prefer my controversies. Who doesn’t like a warm cinnamon roll, even if it’s a little different?

I wouldn’t recommend washing it down with the apple cider and marshmallow-flavored LeFou’s Brew, however, as some treats want to abuse your taste buds, apparently. When added to a cinnamon roll, this one will short-circuit your sense of taste. In fact, LeFou’s Brew is so sweet, it may affect your ability to see color as well.

Another good standby treat for just about everyone is ice cream. I’m a sucker for mint chocolate chip, and the Plaza Ice Cream Parlor offers it in simpler forms than as part of the intimidating Kitchen Sink. You can get it in either a cup or a cone or a cone in a cup, complete with ears of the mousy persuasion. It’s only because they have my favorite flavor that I mention it. The ice cream itself is basically the same stuff you’ll find in any grocery store, and while it’s not bad, it’s certainly not great. Fortunately the setting is special, even if the treat isn’t especially, and that can go a long way towards coloring our impressions of things. Besides, it’s still ice cream.

Ice cream in Florida—particularly in a cone—is a tricky situation to navigate. It’s not a bad idea to find a place to sit and enjoy your treat, as the sun and heat will wreak havoc on your frozen goodness—unless you’re impervious to ice cream headaches—which happens to be one of my super powers.

Epcot is for me the most difficult of the parks—not because sweet treats are hard to come by, but because they are so plentiful as to be very nearly overwhelming. The best thing to do is relax, take a deep breath, and try not to over-think things. There are so many wonderful choices—from fun to refined. If you’re a fan of sweets and are intent on entering some form of a sweets-induced coma, you could do a lot worse than to drift away into that blissful dream-state that is the French pavilion. With their patisserie, ice cream shop and crepes stand, you really need go no farther than there. If, however, you can tear yourself away from France, there are in fact many other options available to you.

The School Bread at Kringla Bakeri og Kafe gets a lot of press. It looks like a large, fancy doughnut about to burst with goodness but it’s anything but. I found the bread a little dry and it wasn’t as sweet as I anticipated, which is usually a good thing. The dryness of the bread, however, detracted more from the experience than the lack of overwhelming sweetness helped. There was a slight hint of cardamom that finishes each bite, and I liked that very much. It’s not a taste I get very often, and it makes the bread stand out a bit. Many, many people like it, so from that perspective, it’s probably still worth a try. But I would personally rather have any number of other treats found at Epcot. I like the weirdly wonderful world of Norway, so we do spend time here and having a snack isn’t a bad idea.

The Mousse au Chocolat at Les Halles Boulangerie & Patisserie is the way chocolate mousse should be. It is thick, rich, chocolaty and moist, which is something I can’t say about all mousses. There’s also a lot of it, so it may be something you consider sharing, unless doing so threatens to cause you and your friend or friends to cross spoons. You may not put an eye out or do serious injury to one another, but you will look ridiculous.

At L’Artisan des Glaces Artisan Ice Cream & Sorbet, you will find the Ice Cream Martini, which is your choice of 16 ice cream flavors floating in Grand Marnier, Clement Rhum, or Whipped Cream flavored Epic Vodka. Ordering this treat will make you feel like James Bond. You know, had he worked for MI31, the little-known department of ice cream intelligence.

Caramel lovers adore Karamell-Küche in the Germany Pavilion. Whether pretzels, crisped rice, strawberries, grapes or more, if it can be submerged in a vat of caramel, chances are you can find it here. At least now we know where to find the Hat Box Ghost.

The Carrot Cake Cookie at The Writer’s Stop is a really well-thought-out, and executed dessert. It’s a carrot cake cookie with cream cheese icing in the middle, although my wife, who has a bone fide sweet tooth, thought it may have been too sweet. Of course, it was right after she had lost onstage at the American Idol Experience and that may have influenced her opinion. That could be the reason she initially said it tasted like defeat.

The Napoleon at Starring Rolls Café is one of my wife’s favorites. There is also one available at Les Halles Boulangerie & Patisserie, but she thinks this one is better. Creamy and sweet without being overly-sweet, with a nice texture from the puff pastry, this treat alone is almost worth the trip to Hollywood Studios.

Of course no rundown of sweet treats at Disney World would be complete without at least a mention of Mickey’s Premium Ice Cream Bar. They are easy to find, being more plentiful and pervasive than Disney Vacation Club kiosks. It may be your basic chocolate-covered ice cream on a stick, but it is iconic nevertheless.

This is just the tip of an otherwise very large, very sweet icecreamberg. There are easily more delectable comestibles at Disney World than there are strollers gathered around Prince Charming’s Regal Carrousel, awaiting the day of the Great Stroller Reckoning. It’s impossible to eat or even taste everything in one visit or even several, and not recommended if you want to enjoy/remember the rest of your vacation. Although it may seem by virtue of their sweet goodness that some treats want to be abused by you, pace yourself, and don’t despair at the intimidating challenge before you. Simply hold your head up, and keep moving on, more treats await.

What are your favorite treats? Let me know in the comments below. 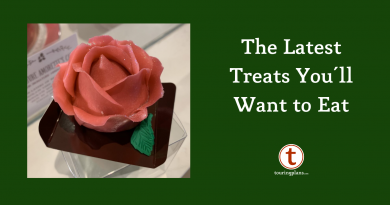 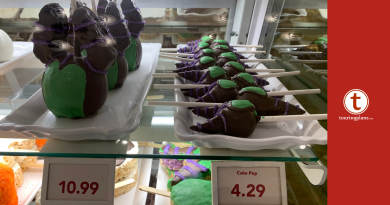