This holiday season (and by “holiday season,” we, and Disney, mean the last two months of the year as soon as the Halloween decorations come down), the ceremony that illuminates Cinderella Castle’s “Dream Lights” has been reworked as A Frozen Holiday Wish. In prior years Cinderella and Fairy Godmother lit the castle in a show called, “Cinderella’s Holiday Wish.” The beautifully lit castle is a spectacle that makes seeing a huge crane in all your photos from the early fall and mid-winter mostly worth it.

This year the honors are done by Frozen‘s Elsa, with assistance from her sister Anna, Kristoff, and Olaf the Snowman. Lest you think Elsa just goes around lighting random castles, she does ask permission (from the crowd) first. SPOILER: The crowd says, “Yes”. The gist of the new show is that everyone wishes for snow at Christmas starting November 5. If only there were someone around who could create snow on demand….

While it sounds like I’m mocking the show, if you can get past the cheesiness of the storyline, it’s fun and pretty. The build-up to the lighting does seem to go on a little long, but the combination of castle projections and sparkling lights is very nice. My complaint is about the logistics of seeing the show. A Frozen Holiday Wish is wedged in with Dream Along with Mickey, Move It! Shake It! Dance and Play It!, and/or an evening parade, which makes the hub – already crowded due to construction – really tight. Unless you really want to see Anna and Elsa on the castle stage, watch from a distance or risk getting boxed in and having to sit through Dream Along with Mickey.

Our video of the actual lighting is on YouTube. If you do a search you should find it from all angles, as it seems every blogger in Orlando, including yours truly, was there to get it online first. Or if you’re visiting this holiday season, check your Times Guide and see it in person. The show is scheduled at 6:15PM and 7:30PM on nights without special events. On nights with Mickey’s Very Merry Christmas Party (like tomorrow, Friday, November 7), it is scheduled for 6:15PM during normal park hours and 8:00PM during the separately-ticketed party.

Video from TouringPlans (apologies for the amateurish portrait orientation – it’s the only way to get the whole castle from close in): 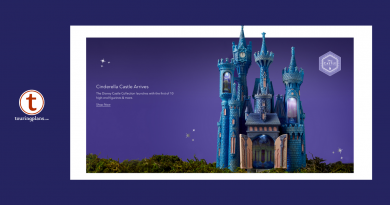