This week’s SATURDAY SIX takes a look at Six “Easter Eggs” at the Universal Orlando Resort. The Universal theme parks are filled with extraordinary features, from the incredible dragon atop Gringotts bank in Diagon Alley, to the hilarious games of chance in front of The Simpsons Ride, but my favorite ones are the subtle – almost hidden -details that most guests don’t even notice while touring the park. I like to think of these details as Easter eggs, similar to the ones most of us are familiar with in movies (and, in Hollywood, no one is better than Disney and Pixar.) Now, some of these details are almost impossible to find unless you know where to look for them, while others are hidden in plain sight, but all of them, whether consciously or subconsciously, add to the overall immersion at Universal.  Today we are going to look at six of these Easter eggs, several of which even longtime Universal fans may have not noticed before. Remember that clicking on any picture will bring it up in full size, keep your head on a swivel, and let’s start counting down…

(EDITOR’S NOTE: Unfortunately Twister…Ride It Out disappointed it’s last guest in 2015.) Our first stop is at an attraction that may not be around for much longer, Twister… Ride It Out. Based around the movie Twister from 1996 (and one of your humble authors favorite guilty pleasures,) the attraction’s pre-show has guests walking through a house that has been ravaged by a tornado. One of the pieces of debris inside the house is a car coming through the roof. If you look closely at the passenger side front tire of the vehicle, you will see a pair of the iconic Mickey Ears.

Sometimes the tire is actually moving, while other times that effect has been turned off and the wheel sits still. Be sure to look for this “hidden Mickey” the next time you are at Twister…Ride It Out (although you’ve been warned, I’d make that trip sooner rather than later.)

The former Nickelodeon Studios became home to the Blue Man Group in 2007, but if you go to the restrooms at the front of the Sharp Aquos Theater, you will see a nod to the building’s former tenants. One of the signature pieces of almost anything Nickelodeon related is “green slime.” In fact, one of the selling points of the Nickelodeon Hotel in Orlando is the opportunity for guests to be slimed. While you won’t be slimed at the Blue Man Group restrooms, you will see the green slime pattern on the floor, just as it was when the building housed Nickelodeon.

One of Universal Studios Florida’s most famous rides was Jaws, to the point where I believe more people identified Universal with that ride than any similar attraction for a Disney park. So when Universal announced in December of 2011 that this opening day attraction would be closing in early January of 2012, one might assume a mass outbreak of Universal fans handcuffing themselves to the ride. However, that didn’t happen. While many still miss Jaws, most of us knew it was going away so that an expansion to the Wizarding World of Harry Potter could take its place. With the opening of Hogsmeade Village in 2010, Universal earned the trust of theme park fans that it could deliver the gold standard in immersive theming, and it over delivered earlier this year with Diagon Alley. In a welcomed surprise, while Hogsmeade Village has no references (that we know of) to the Lost Continent area that it replaced, Diagon Alley has several references to make Jaws fans happy.

One of the Jaws references is found on an album cover located in the window of a record store facade on the London Waterfront that “hides” Diagon Alley. The album is titled Here’s to swimming with bow legged women by The Quint Trio. This is in reference to a line said in the movie Jaws, by the character Quint in a toast with Chief Brody.

Other references can be less recognizable, such as this telescope in Wiseacre’s Wizarding Equipment that includes parts from the Jaws queue.

Next to Florean Fortescue’s Ice-Cream Parlour is a window display for Mr. Mulpepper’s Apothecary. Here you will see a large jawbone from a shark in the back of the display. In Knockturn Alley, there are shrunken heads that you may hear sing “Show me the way to go home,” a song used in the film. Bravo to Universal for going above and beyond in paying respects the one of the park’s most beloved icons.

Jurassic Park in Islands of Adventure has the incredible Jurassic Park River Adventure ride and Camp Jurassic, in my book the most underrated attraction in Orland0, but one attraction many guests overlook is the Jurassic Park Discovery Center. Located on the ground floor of the building which houses The Burger Digs, the Discovery Center has several interactive features that are family friendly. Here is also where you’ll see an interesting can of shaving cream that should have special significance to anyone who has seen the movie Jurassic Park.

Like Jaws, Kongfrontation was another opening day attraction for Universal Studios Florida back in 1990 featuring ol’ banana breath himself, King Kong. The attraction closed in late 2002 to make room for Revenge of the Mummy, a dark ride/roller coaster hybrid that opened in 2004 based of The Mummy film. Like the shark in Jaws, King Kong is a beloved character to many Universal fans and it would take one heck of a ride to allow them to forgive the park for taking away Kongfrontation. To everyone’s surprise, a coaster based on a Brendan Fraser film instantly became one of the most thrilling rides in Orlando.

While there are several Kong related Easter eggs to look for, the best one to spot is during the dark ride portion of the attraction. While your ride vehicle is going through the throne room filled with treasure, look towards the front of the room on the left and you will see a small statue of King Kong.

I love Seuss Landing. Love it. I think the Caro-Seuss-el is hands down the best carousel attraction I’ve ever been on. The details on Sneetch Beach are wonderful, and Circus McGurkus Cafe Stoo-pendous is a counter service restaurant that is much better than it needs to be (in fact it is approximately 1,000 times a better experience than a similar restaurant, Cafe 4, in Marvel Superhero Island.) During the Grinchmas season the area gets even better, but today we’re going to take a look at an Easter egg in this land that is “hidden” for everyone to see. In a photo-op area on Mulberry Street, there sits a police motorcycle, and above that are three dignitaries, two of which are holding flags. The character on the far left is based on Dr. Seuss himself.

Now, Dr. Seuss isn’t the only creator represented inside the theme parks as Stan Lee can be see in The Amazing Adventures of Spider-Man attraction, and Matt Groening in The Simpsons Ride pre-show, but we’ll get to them in another article.

HONORABLE MENTION: 20,000 Leagues Under the Sea and Mr. Toad in Diagon Alley.

Earlier we mentioned the tribute to Jaws in the London Waterfront, but another window in this area also has a wonderful Easter egg, this time for Walt Disney World fans. In the bookstore facade window, if you look behind a poster in the window you will see several books, but specifically 20,0000 Leagues Under the Sea and The Wind in the Willows. These two books are the basis for a couple Magic Kingdom attractions that are now gone. The obvious one, 20,000 Leagues Under the Sea, has been replaced by Under the Sea – Journey of the Little Mermaid. The other, Mr. Toad’s Wild Ride, was removed to make way for The Many Adventures of Winnie the Pooh. Mr. Toad’s Wild Ride was based on Disney’s movie adaption of The Wind in the Willows.

So there you have it: Six “Easter Eggs” at the Universal Orlando Resort. As you can see, there are a lot of great details throughout Universal. See you next THURSDAY for the latest edition of the SATURDAY SIX, where we are going to have a very special Thanksgiving edition, where we are going to give our “theme park thanks.”. If you had fun, be sure to check out The Magic, The Memories, and Merch! articles, or, for your listening pleasure, check out the Pardon the Pixie Dust podcast.

If you enjoyed Six “Easter Eggs” at the Universal Orlando Resort, you may also enjoy:

Six “Secrets” of the Wizarding World of Harry Potter – Hogsmeade

Special thanks to crack staff photographer Brandon Glover for his invaluable assistance with this article. Be sure to also check out Brandon on The Park Blogger podcast with co-hosts Aengus Mackenzie and Brian Carey. 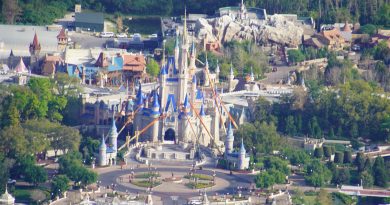 The Magic, The Memories, and Merch! January 2015 Photo Report of the Disney Outlet Store

One thought on “SATURDAY SIX: Six “Easter Eggs” at the Universal Orlando Resort”