We’ve reached the conclusion of my Innovention-based game review series. To read about the Great Piggy Bank Adventure app, click here. For Habit Heroes and Sum of All Thrills, click here.

Today, we’ve got apps based off of the StormStruck and THINK exhibits. Let’s get this storm brewin’!

StormStruck: A Tale of Two Homes was first introduced April 16, 2012 in the iTunes App Store. It has had no updates since its release and requires iOS 3.1.3 or later. The app, presented by the Federal Alliance for Safe Homes, Inc. (or FLASH), is compatible with the iPhone, iPad and iPod touch. I had no issues when downloading the program on to my second generation iPad and iPhone 6.

Experience 3D play with Mother Nature by generating a rockin’ windstorm and seeing how “your” house handles it. Create a new storm each time and choose different steps to strengthen your home before you move on to the next round. You’ll have fun as you discover all of the right moves to weather the storm.

Translation: The goal of the game is to protect your home from future storms.

The game begins with a screen featuring a single-family home complete with an attached garage and large shady tree. (Can you tell I’ve been house hunting from my description?) To the left of the home is a “storm spinner.” To create a rain storm, simply drag your finger in a circle round and round until the sirens are set off. Insiders Scoop: You can also just hold your finger down on the storm spinner instead of making a circle.

Once the alarm goes off, the thunderstorm will completely destroy the house. (I hope you took cover!) Following the storm, it is up to you to make the necessary safety upgrades to ensure the house stays intact should another storm occur.

Eight home upgrades are found on the bottom of your screen. They include tasks such as replacing/moving the tree, installing high wind/impact-rated roof coverings and attaching hurricane shutters. You may only choose one upgrade at a time.

Once your chosen adjustment has been completed, you will be asked to re-start the storm. As you’ll see, other parts of your house will still fall apart, but that upgrade will stay intact. Following the second storm, you will select another upgrade and re-start the storm.

Repeat this process six more times (for a total of eight) and you’ve completed the game. The house has been fully reinforced and will survive future thunderstorms. Hooray!

Now here’s what really grinded my gears: There was no text below the upgrades stating what they were. There were only pictures. As someone who knows nothing about exterior home repairs, I had no idea how a picture of a door related to storm protection. A description of the repair only popped up once I had picked a random upgrade selection…but what if that wasn’t the upgrade I wanted? What if I wanted to strengthen the garage door instead of making the front door swing outward? I wished there was the option to see what each repair was before making my final selection.

A common theme with these Innoventions-based apps is that they are never updated. Once you play through the game, that’s it. There’s nothing new. I read through the reviews of this app and the biggest request was for more; more natural disasters, more houses to choose from…anything to keep the game fresh and relevant. Another problem I found was the game was more likely to crash if played on an iPad vs. an iPhone, so that’s something to keep in mind when downloading it.

Okay, so now the good things. This app is very similar to the attraction, found in Innoventions East at Epcot. Both this app and the THINK one (we’ll get to that in a minute) do a fantastic job taking the original attraction and allowing you to take it home for further enjoyment. If you haven’t experienced the attraction, this is a wonderful way to try it out and not miss out on the fun.

At the StormStruck exhibit, there is no direct advertisement promoting the app. However, in the promotional video, you’re invited to visit www.stormstruck.org for more fun. The website will then direct you to the app.

A cool feature of the website is the option to search for weather risks in your area. I clicked on my home state of good ol’ Minnesota to find that we’re susceptible to floods, tornadoes and severe winter weather (duh). The website then shares information on how to protect your home from said risks and how to keep your family safe. This feature would be fun to incorporate into a weather safety unit for all you teachers out there! In addition, you can also send a digital email postcard from the “StormStruck Post Office.” I’m not sure who would take advantage of this, but it’s a cute idea.

The app is rated ages 4 and up, and I agree with that to a certain point. I tested this out on my preschool students and they really seemed to like it. I thought they would be scared into thinking their own house could be completely demolished by a rain storm, but that didn’t seem to cross their minds (although I reassured them of their safety just the same.). They loved watching the storm and enjoyed taking turns twirling the storm spinner with their little fingers. When it came to the upgrades, they needed some assistance. I had to explain why the house needed repairs and had to read any text as it was beyond their reading level. Otherwise, it was a big hit!

Overall, I appreciated the game for what it was and would recommend it to Disney fans looking for a taste of Innoventions at home.

The IBM THINK app was released July 24th, 2012 to the iTunes App store, with an update three days later. It is presented by IBM Corp. and is compatible with iPads running iOS 5.0 or later and the 10′ Android Tablet as well.

Explore how progress happens with THINK. For kids, innovators, and forward thinkers. We suggest you start using this app by watching the Think film, and then explore the content within the Seeing, Mapping, Understanding, Believing and Acting modules.

The home screen features six pedals – Believing, Understanding, Mapping, Seeing, Acting and the Think film. The first five pedals are interactive modules (like that of the tall interactive walls at the actual exhibit) that help you explore how progress occurs. They contain personal interviews, interactive maps, behavior predictions and timelines.

Below is a brief description of each pedal (found in the app description):

These modules are overwhelming at first (it’s total information overload), so start slow. Pick a focus word that sounds most interesting and start there. For me, that was “Understanding.” I’m a Nosey Rosie and full of questions, so this one was right up my alley. I loved learning how far we have come because of brilliant innovators and advances in technology. Let me know which module you liked best!

The film is the same one you will see at the THINK exhibit in Innoventions West at Epcot. The film uses different stories to express patterns of human progress and show how technology improves our world. The ten minute video was interesting and inspiring. I learned how technology is being used to personalize medical care, reduce traffic and to one day bring an end to world hunger. It was visually stimulating and is something I recommend checking out either at the exhibit or through the app.

Insiders Scoop: The film can be downloaded onto your device or can be seen via YouTube.

Here’s what Maddi had to say regarding the app and the exhibit:

The wall in front of the attraction displays a QR code and encourages you download the app. The app is not referenced at all during the show, but the QR display promises to continue the learning experience.

On my latest trip to Epcot, I spoke with the Cast Member at the THINK exhibit and asked what the difference was between the app and the attraction. He stated said the two were nearly identical with one exception: the interactive modules found in the app contain more information than those at the exhibit. Another perk of the app is a link to the IBM website where I was delighted to find a lesson plan for STEM-focused educators. It provides a list of objectives, goals, materials and even a worksheet to assist in your teaching. I thought this was a wonderful way to further engage those interested in both the app and exhibit.

I had only one complaint regarding the app: the age rating (ages 4+.) I chose not to test this app on my preschool students as I knew they would not have the attention span or the appropriate reading level to properly engage. If the app was more of a game (seriously, if you’re expecting a game, you’ll be disappointed) rather than a dead-ringer of the original attraction, it might be more suitable for the younger age. However, because of the high volume of information and the more adult (rather than kid) focus, I would suggest at least an 8+ age rating.

Okay, I lied. I have another complaint…and suggestion. This app had issues with crashing on my iPad. I checked out the reviews on the iTunes App Store to see similar complaints. If IBM isn’t going to update the app to include current information, I think they should at least correct this issue.

I also think they should make this app compatible with the iPhone or Android. If I had the option to download this on to my phone, I could see myself pulling it up while waiting for a meeting or appointment.

Despite that one…okay fine, two…discrepancies, I really enjoyed the app. It was thought provoking and stayed true to the THINK exhibit in every way. Check it out if you love the original attraction or are looking for a productive and educational way to spend a free evening.

Have you downloaded either of these apps? What did you think? Let me know in the comments! 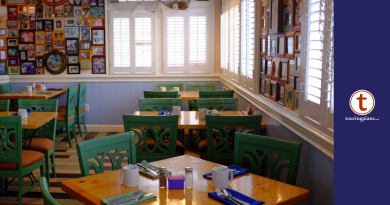 The Best Dining Values at the Deluxe Resorts Part II