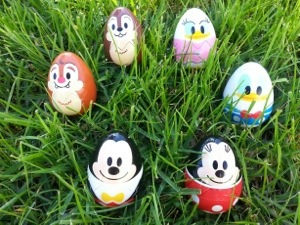 It’s almost that time again. It’s almost time to celebrate Easter in Walt Disney World and Disneyland. For the past few years, Disney has rolled out a special Easter egg hunt which allows guests to search around either Disneyland Resort or the Walt Disney World Resort, trying to find eggs that are uniquely designed to look like Disney characters. This year, the fun will take place at Epcot in Walt Disney World and at Disney California Adventure, Disneyland, and new for 2016, Downtown Disney in Disneyland Resort. Guests will be able to participate in this egg-cellent from March 2-27 (or while supplies last.)

Here’s how it will work: Guests will be able to purchase a map for $5.95, plus tax. With each map stickers are provided that match up with the actual character-themed eggs that can be found in each of the the parks (or Downtown Disney.)  Guests are then able to search via the map’s general locations and when an actual egg is found, the Guest will then place the character egg sticker on the map where the was located. Once all the eggs have been discovered, Guests should return their map to the redemption station for a fun prize.

Here’s a glimpse of what the maps will look like: To purchase maps at Epcot, head to at Heritage Manor Gifts at The American Adventure, Pin Central, Port of Entry, and World Traveler. The redemption location is at Port of Entry.

At Disney California Adventure, maps can be purchased at Humphrey’s Service and Supplies, Oswald’s, Sarge’s Surplus Hut, Elias & Co.,  and Treasures in Paradise. The redemption location is at Elias & Co.

Finally, Guests may also pick up maps at several stores found in the hotels of Disneyland Resort, including, Acorns Gifts & Goods at Disney’s Grand Californian Hotel, Mickey in Paradise at Disney’s Paradise Pier Hotel and Fantasia Shop at the Disneyland Hotel.