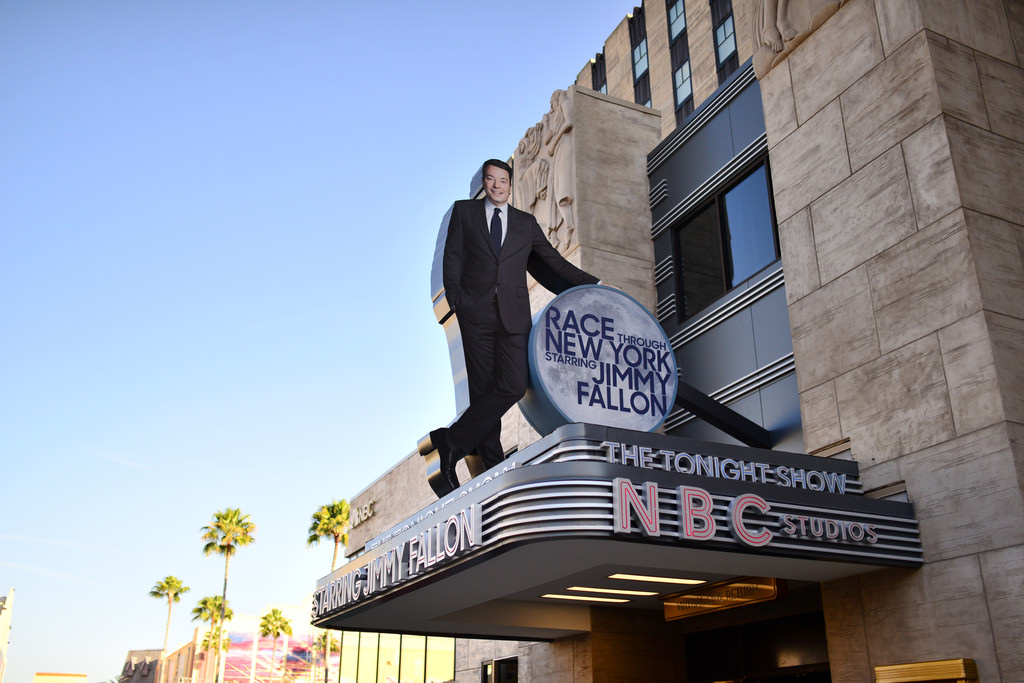 This past week Universal Studios Florida (USF) officially opened their newest attraction, Race Through New York Starring Jimmy Fallon. While not the E-Ticket thrill ride many Universal fans are used to, it is the family friendly attraction that the Universal parks needed. Featuring the crowd pleasing Tonight Show host Jimmy Fallon, the attraction continues the Universal tradition of including humor within the attraction, while also implementing a whole new way to experience the thing we all hate the most: Theme Park Lines. Today we’re going to take a look at some of our favorite parts of Race Through New York Starring Jimmy Fallon, and let’s kickoff the countdown with…

One of the many synergies between the attraction and the park itself is the ride’s natural placement in the New York section of USF. With many theme park fans about to riot because of the Guardians of the Galaxy overlay of Tower of Terror out in California, it is great that Universal was able to place a ride exactly where it should go (as opposed to say, the nearby Transformers: The Ride 3-D.) Not only is Race Through New York in the best possible spot, the facade itself looks so good it immediately made everything around it look better. A scaled down replica of the actual NBC building at “30 Rock” in New York City, Race Through New York looks fantastic. Even better, while the facade looks stunning during the day, the area looks even better at night when the sun goes down.

We here at the SATURDAY SIX absolutely love when attractions pay tribute to the rides they replaced. These include the Jaws references in Diagon Alley, Back to the Future’s Doc Brown in the Simpsons Ride, and even a 20,000 Leagues Under the Sea Nautilus in the queue for Journey of the Little Mermaid. The USF ride which Fallon replaced was a controversial one. Twister…Ride It Out was critically panned by many bloggers, but for me personally, every family member and friend I took to the parks wanted to experience it and they all enjoyed it. Looking through the windows of the Fallon ride will reveal two references to the Twister attraction. The first homage is an ad for the fictional Twister Cola, while the second is a long blue sleeve denim shirt, the same type worn by Twister star Bill Paxton in the ride’s legendary pre-show video.

While it is going to take some time getting used to, especially for us long time theme park fans who have been trained to stand in a line, but Universal has eliminated the “stand by line” for Race Through New York. Guests can just pick up a return time ticket at a Virtual Line kiosk or check-in via the Universal Orlando Resort App. When it is time to enjoy the attraction, you’ll be given a color coded Peacock Card when you check in at the main entrance. You are then able to relax and check out the Tonight Show museum and both of Race Through New York’s pre-show rooms until the areas light up with your particular color. Now, just as WDW had guests waiting for the Main Street Electrical Parade AFTER the parade went to Disneyland, we’ve seen guests standing in line at Race Through New York. Don’t be that guest. Yes, we theme park fans have been training for years to stand in line for the sake of a line – a mentality that The Simpsons regularly mocks when it makes fun of theme parks – but here are some really great things in the pre-show rooms you should check out.

As a lifelong Tonight Show fan, the area dedicated to the history of the show is one of my favorite things in the entire park, and you get to experience it right after you check in for the attraction. While Steve Allen and Jack Paar were before my time, it’s nice there are sections for them. Johnny Carson’s Tonight Show is an American institution, and Jay Leno had quite the run himself going 20+ years combined. The entire situation with Conan O’Brien was a fascinating one to watch play out over the one year he hosted the show, and it was awesome for a Coco fan like me to see a tribute to some of the things popularized during his run such as Triumph the Insult Comic Dog. I would love more of these “museum” like features at both Universal and Disney. Imagine an attraction that let guests experience props and videos from the park’s history such as Kongfrontation, the Funtastic World of Hanna-Barbera, or Alfred Hitchcock: The Art of Making Movies. My family once did a goofy Star Trek video at USF that might be the cheesiest thing I’ve ever done in my entire life, but I loved it.

# 3 – Seats with Outlets and Games

First of all, whoever put seats in an air conditioned room as part of a pre-show should get a raise. Any of us who have had to enjoy a Florida summer  day at the parks will help chip in. However, the person who had the foresight to include outlets so that guests could charge their electronics deserves an even bigger raise. There are not enough outlets at Universal or WDW in the current world in which we have become completely attached to our phones. When Uni opened Cabana Bay Beach Resort, it redefined how many convenient outlets you could put in a hotel, and let’s hope Race Through New York is the new baseline for having outlets in attractions.

While taking a breather, Universal also has a Race Through New York video game to enjoy. A couple years ago, Disney put video games in the queue for Space Mountain, but I personally never saw the point. In my experience, even taking a few seconds to play the games ended up causing a break in the line. Recently, thanks to FP+, the games in the queue make even less sense. Because Race Through New York doesn’t have a traditional line, you can actually play the video games without people behind you yelling to move. You also get to see Jimmy Fallon run over Hashtag the Panda in the Tonight Rider (what a perfect name paying tribute to the classic NBC show Knight Rider) and seeing Hashtag get abused is always funny.

# 2 – The Ragtime Gals and Hashtag the Panda

You can’t call yourself a theme park fan if you don’t love the Dapper Dans  at the Magic Kingdom, but Universal has delivered an even funnier version of a barbershop quartet with The Ragtime Gals. By far and away the biggest surprise of Race Through New York, The Ragtime Gals entertain the crowd singing various harmonic melodies – including a segment dedicated to boy bands – and deliver an amazing History of Rap segment.  The “Gals” aren’ the only live entertainment though as the Tonight’s Shows mascot, Hashtag the Panda,  is also around and up to his usual crazy antics. It was one thing for Universal to put  a scareactor in the queue for Skull Island: Reign of Kong, but having so much live entertainment for guests in the pre-show for Race Through New York is absolutely amazing.

How cool is this? Race Through New York has a ride safety video that you actually want to watch. Talk about a game changer. First, with Harry Potter and the Forbidden Journey, Universal builds a stand by queue that guests actually want to spend MORE time in. Now they’ve introduced a ride safety video guests enjoy watching. What’s next, a ride in which we don’t exit through a gift shop?! Dare to dream kids, dare to dream.

The side benefit to having Race Through New York Starring Jimmy Fallon at the parks is the show’s natural tie-in to The Tonight Show. Fallon and the rest of the tonight show gang have now done two weeks of shows in Orlando (one in 2014 and the second one this past week.) Not only did we get a ton of hilarious theme park related jokes on the Tonight Show itself, but the show brought live entertainment and concerts into the parks with some A-List talent.

When Jimmy Fallon takes his guests into the Universal parks, things can get really fun. During his most recent visit, Fallon and The Rock surprised park guests by wearing mascot versions of themselves. In other shows, Fallon played a game of giant beer pong against Pitbull in Springfield USA and rode Rip, Ride, Rockit with Kevin Hart (include the best use ever of the “You Must Be This Tall To Ride” sign.

So there you have it: Six Reasons We Love Race Through New York Starring Jimmy Fallon! See you next weekend for the latest installment of the SATURDAY SIX, where we’ll look at something fun from the world of Disney and Universal. If you enjoyed yourself, be sure to check out The Magic, The Memories, and Merch! articles, or, for your listening pleasure, check out the E-Ticket Report podcast. You can also follow Your Humble Author on Twitter (@derekburgan).

Special Thanks to crack staff photographer Brandon Glover, the bio-est of all reconstructs @bioreconstruct, theme park’s most liked blogger Banks Lee, and blogger to the stars Megan Stump for their invaluable assistance with this article. Be sure to also check out Brandon on The Park Blogger podcast with goofballs co-hosts Aengus Mackenzie and LitemAndHyde , while fellow Potterheads may enjoy Meg’s work on the Central Florida Slug Club. 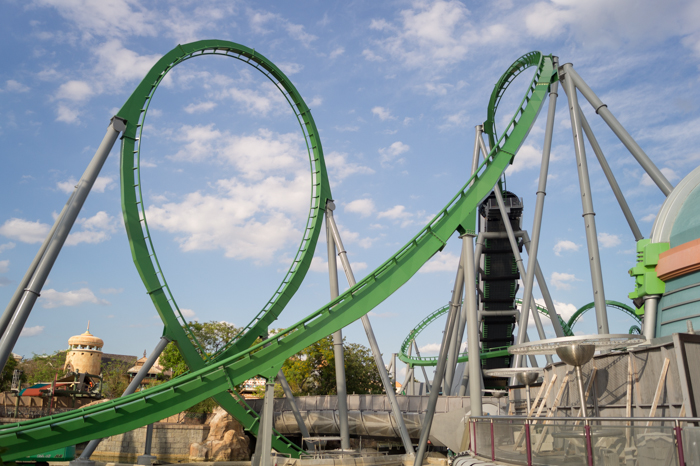