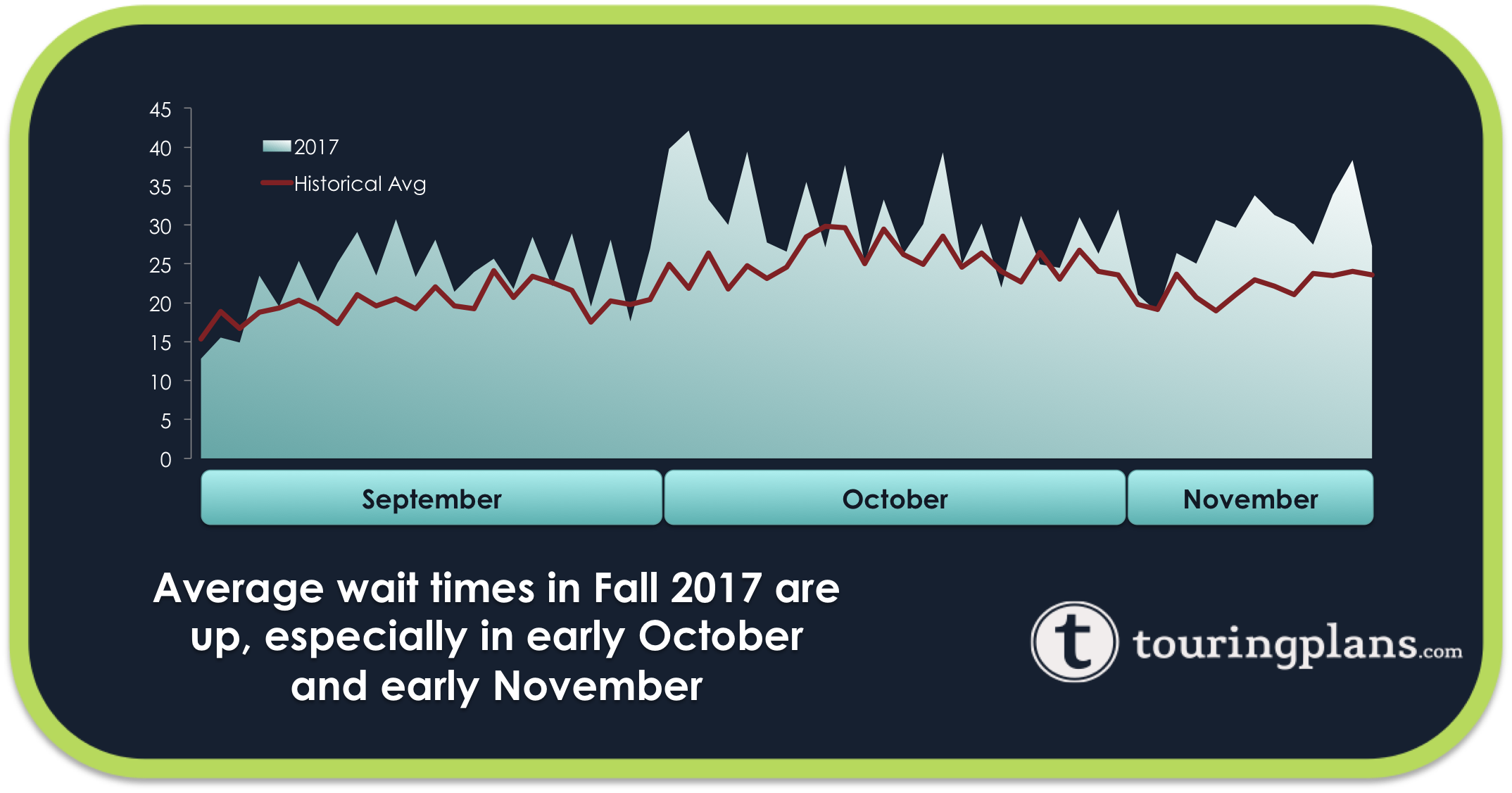 Crowds at Orlando Theme Parks are larger than normal so far in November. The TouringPlans.com Crowd Calendars for Universal Orlando Resort and Walt Disney World are reporting crowd levels one to two points higher than we usually see this time of year. We have some theories as to why we are seeing the increase.

Because the higher crowd levels are occurring at both Walt Disney World and Universal Orlando we don’t think the influx has anything to do with park operations like what we saw at Disney World in Fall 2016 and Fall 2015. We don’t see any indication from the school schedule data to suggest that is the answer either. So, one of the three theories is likely the culprit – or more likely, a combination of the three. But first, let’s take a look at how crowded it has been.

We know that part of the increase in wait times this year at Walt Disney World is due to the impact of new attractions like Pandora and to the closure of other attractions at Disney Hollywood Studios. But the magnitude of the increase that we have seen in early November (and also early October) is significant. Wait times are 10 to 15 minutes higher than what we would normally expect for this time of year. Each index level on the Crowd Calendar represents roughly 10 minutes of average wait so the one and two point underestimates we have seen lately coordinate with the wait times we see in the chart.

The forecasts that we create for wait times take into account much more than just the historical averages. We use a 30-day trend that helps adjust the predictions in the direction of the most recent information. Also, our models account for the Pandora affect and the reduced capacity caused by closed attractions. But even with these adjustments, wait times are higher than expected.

If the driving factor turns out to be the Hurricane re-bookings then it is likely the impact will be short-lived. If it is the other two then the affect may last longer. The good news is that the impact on a personalized touring plan is nearly negligible. By arriving early and completing the busiest attractions in the morning, the total amount of time spent in line is unchanged from previous years if you follow a touring plan.

We currently have no plan to update the Crowd Calendar predictions. We prefer to see how the next few weeks play out. But as always, we continue to track wait times on a daily basis and will inform you when an update is in order. If you arrive in park and see longer lines than predicted, make sure to re-optimize your plans, that will ensure your plan is adjusted for the most recent information.

4 thoughts on “November Crowds Are Larger Than Usual in 2017, At Disney World And Universal Orlando”