If you are tracking the crowd levels on your travel dates you most likely will not see a change as a result of this update. The number of days changing is lower than average. If you do see a change it is most likely a small one. This update only includes 15 changes greater than 2 points.

Our Crowd Calendar at Magic Kingdom has done very well since Easter. The average error in that time period is 1 point which is our target error. When you consider that a 10% loss of capacity at two or more attractions can cause a 2-point swing, that is not bad. Inclement weather can lead to a 2-point miss as well and we have seen plenty of rainy days this spring. This update brings changes at Magic Kingdom that are small, infrequent, and downward on average. This is all good news for guests of the Magic Kingdom for the rest of 2019. We have overpredicted more than underpredicted in recent months, which is why we are seeing some small downward adjustments.

Crowd levels at Epcot have been more unpredictable than Magic Kingdom since Easter. When we missed at Epcot it was usually an overprediction, which means that crowds are down on average. This update reflects that trend. You will see crowd levels unchanged or down slightly on most days as result of July’s update. There isn’t a lot new at Epcot these days so it is reasonable to expect crowds to be pretty stable for the rest of the summer and into the fall.

Disneyland’s Star Wars: Galaxy Edge has been open for over a month and it has been interesting to observe the wait times at that park. The new land has been busy, but wait times across the rest of the resort have hit record lows. Overall, attendance is down. As we prepare for Hollywood Studios‘ version to open at the end of August we have to ask ourselves if we will observe a similar impact at Disney World. It is hard to imagine that wait times will hit record lows at this park as well, but this update does include some decreases. For whatever reason, it appears that we will not see the full impact of Galaxy’s Edge on crowd levels until the land opens its second headliner attraction, Rise of the Resistance. Currently, the opening date for Rise of the Resistance is unknown.

The week before Galaxy’s Edge opens will see some dramatic reductions on this update. Given what we saw at Disneyland and what we know about crowd control at the new land it seems likely that the week before it opens will be very lightly attended. We will see some limited previews of the new land, but despite some large school districts being off that week we now expect the park to see very light crowds.

Primeval Whirl has not operated since June 14. Although it is not a super headliner like Expedition Everest or Flight of Passage it does entertain 1000 guests an hour on an average day. Magic Kingdom and Epcot have 30 or more attractions to occupy guests but Animal Kingdom only has about 15. When a park loses one-fifteenth of its hourly capacity it causes a significant impact on wait times. Because of that, the observed crowd level at Animal Kingdom since June 15 has been an average of two points higher than predicted. This update includes an adjustment for Primeval Whirl. If we get notice that Primeval Whirl is coming back online we will make adjustments again.

Our Crowd Calendar does not relate directly to park attendance and this Primeval Whirl situation is a good illustration of why that can be an advantage. If you visited Animal Kingdom since June 14 you would see wait times 10-20% higher than usual for this time of year. However, the actual number of people in the park on those days is probably about average. The walkways, restaurants, parking lots and common areas probably don’t feel any more crowded than usual but a touring plan that includes all the headliners will take you longer than the same day last year with the exact same attendance. In our opinion, it is more useful to know how long you will wait in line than to know how many people are in the park.

Got any questions for the stats gurus? Let us know in the comments. 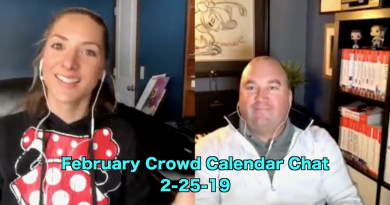