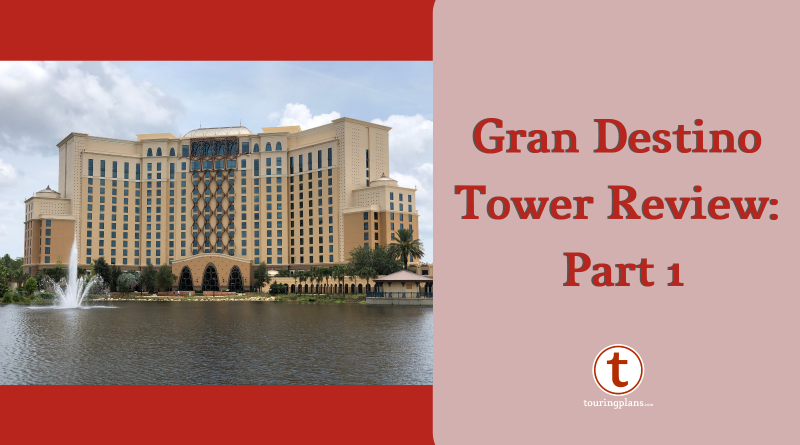 In part one of this two-part series, we’re reviewing a stay during the grand opening week of Gran Destino Tower, the newest section of Disney’s Coronado Springs resort. This part will discuss the rooms, including pricing and room descriptions, the club-level lounge, and overall feel of the resort.

Disclaimer: Disney knows that any new hotel or restaurant opening is going to be covered extensively by traditional and social media. These openings are typically stage-managed like a royal wedding, with extra staff trained to identify media “influencers”, special food, and other one-time-only features. Once the blogs are written and videos posted, the service, food, and prices are changed to maximize Disney’s profitability. It’s unlikely that you’ll have the same experience as we did on opening day, so take all of this with a grain of salt. 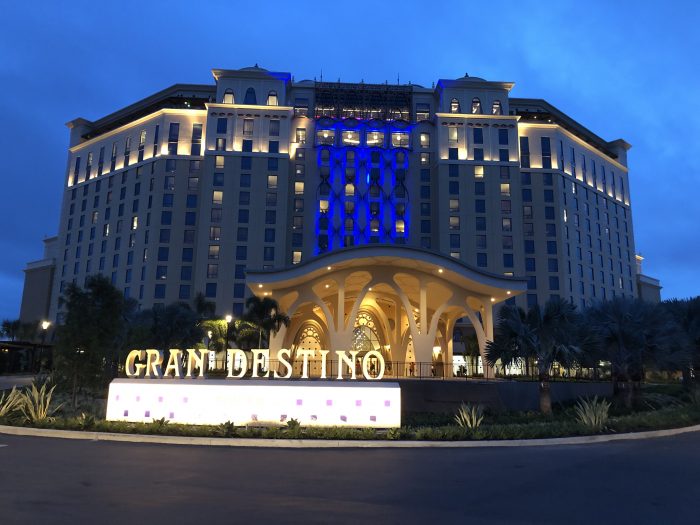 The 15-floor Gran Destino Tower holds Coronado Springs’ newest and most upscale rooms.  Disney says the tower is inspired by great Spanish artists, architects, and explorers. This concept serves as a thematic link to the desert southwest architecture of the rest of the resort: the rooftop lounge’s ceiling calls to mind the pillars and windows of La Sagrada Família in Barcelona, while the Gran Destino lobby and public spaces show a distinct Moorish influence. 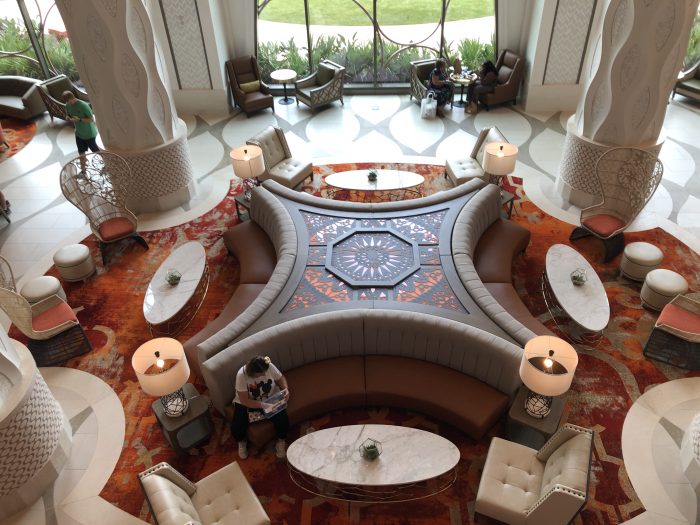 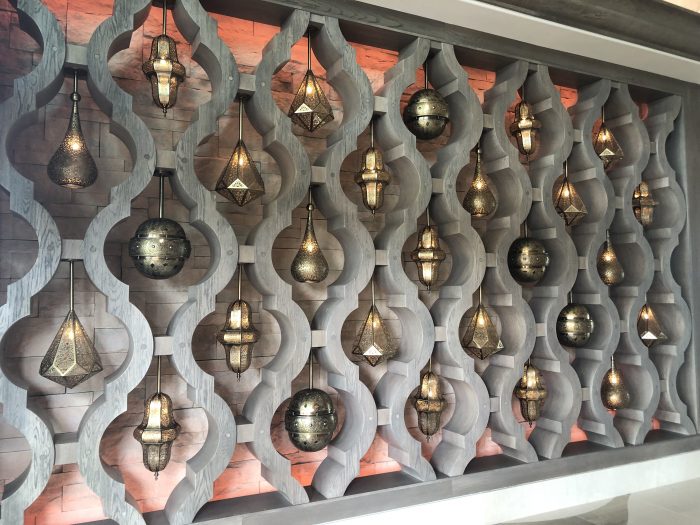 While Disney hasn’t said it, we suspect the purpose for building the Gran Destino Tower was to appeal to companies reluctant to put their executives in standard Moderate hotel rooms. There’s plenty of evidence for this: Gran Destino’s standard rooms are a bit nicer than standard rooms in the rest of Coronado Springs. 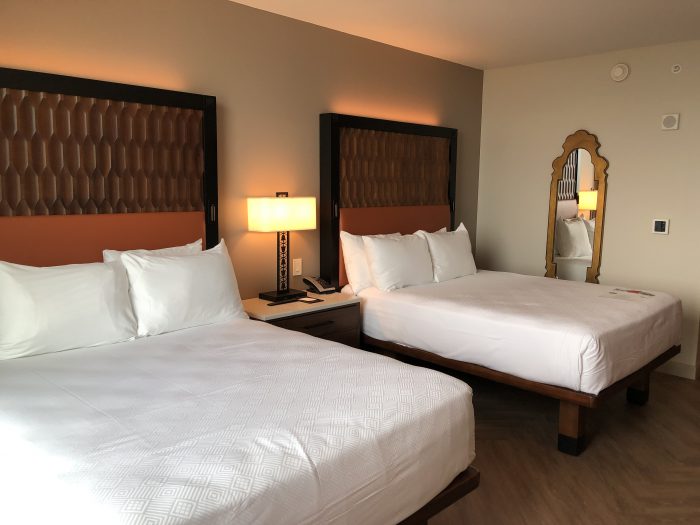 To meet the needs of business travelers, Gran Destino has on-site conference room space that is relaxing and inviting. 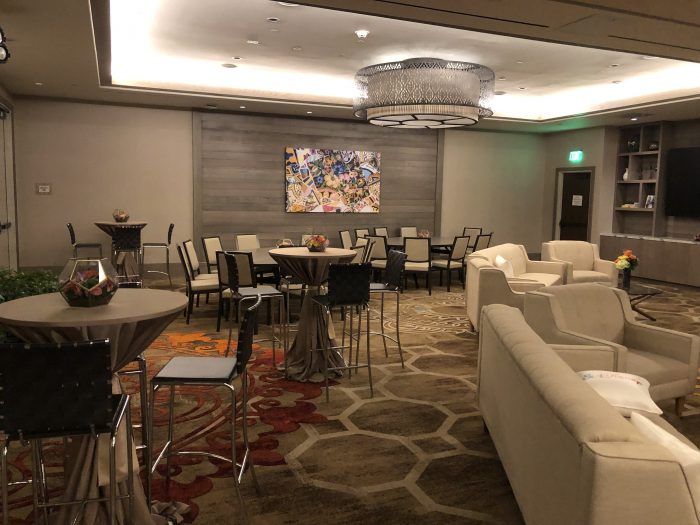 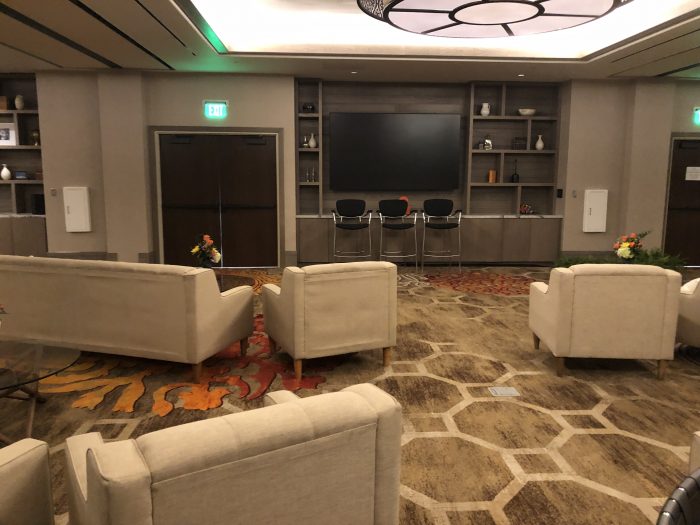 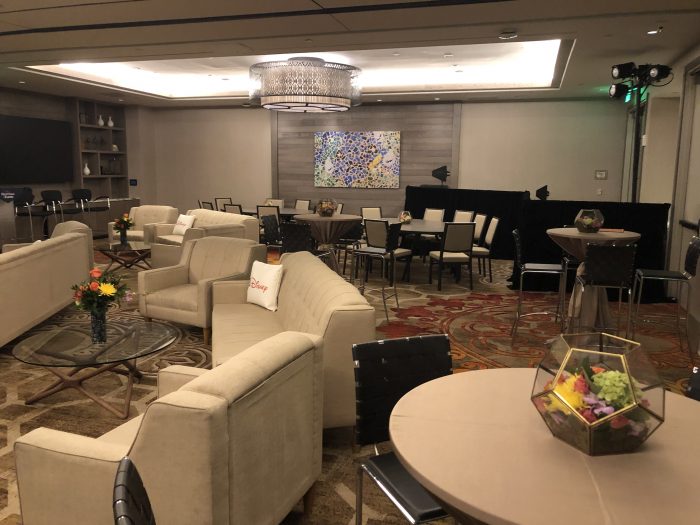 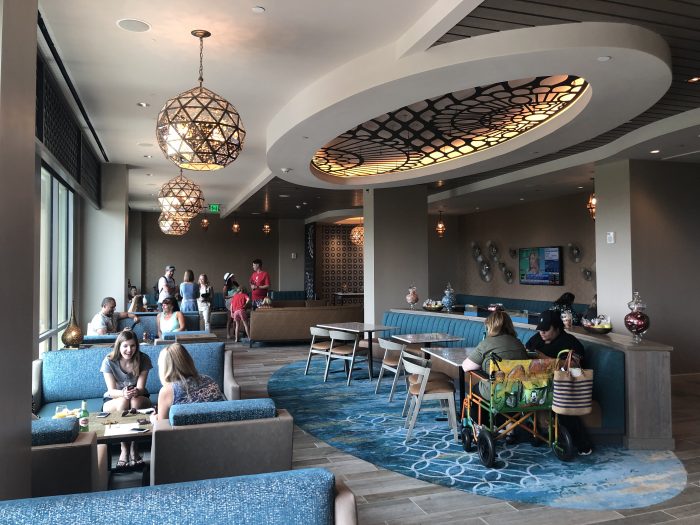 In addition, Gran Destino’s restaurant, Toledo – Tapas, Steak & Seafood, and the next-door Dahlia Lounge, are better quality than those found at other Disney Moderate resorts. (We will be covering the dining options in part two of this article.)

Gran Destino has several key strengths going for it. These include: 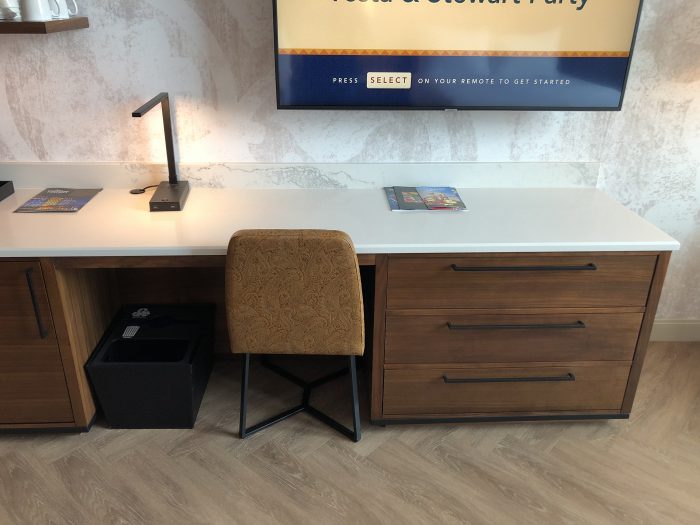 There are also some weaknesses to this resort, mostly in the style and decor. The exterior architecture is noticeably more “Las Vegas lite” rather than authentic Spanish style. The rooms, although well designed, are very generic in their décor . You will not find hotel rooms that have the “I’m at Disney World” vibe. This may be a plus for conventioneers who happen to be staying at Walt Disney World, but it can be off-putting for families wanting an immersive Disney feel.

The 545 rooms in Gran Destino Tower range from standard hotel rooms to executive, one-bedroom, and presidential suites.  These are located on floors 3 through 15 (as is customary in hotels, there’s no 13th floor). 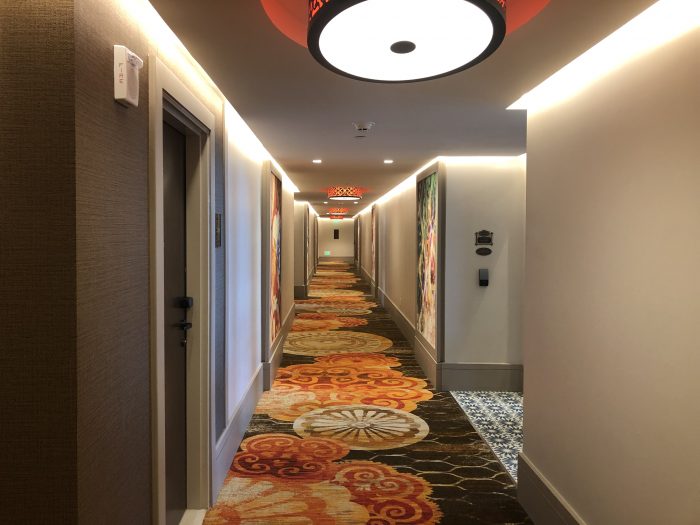 Standard rooms at Gran Destino are on floors 3 through 14. They’re differentiated by the view and whether they have two queen beds or one king bed, with different rates for each combination:

At 375 square feet, these rooms are around 60 square feet larger than most Disney Moderate resorts. They feature vinyl “hardwood” floors, a large desk area, wall-mounted television, a pod-style coffee machine, and mini-fridge.  Storage is in five drawers – three large and two medium, plus a dedicated armoire. The armoire also has a full-length mirror. Lighting in the room is excellent. 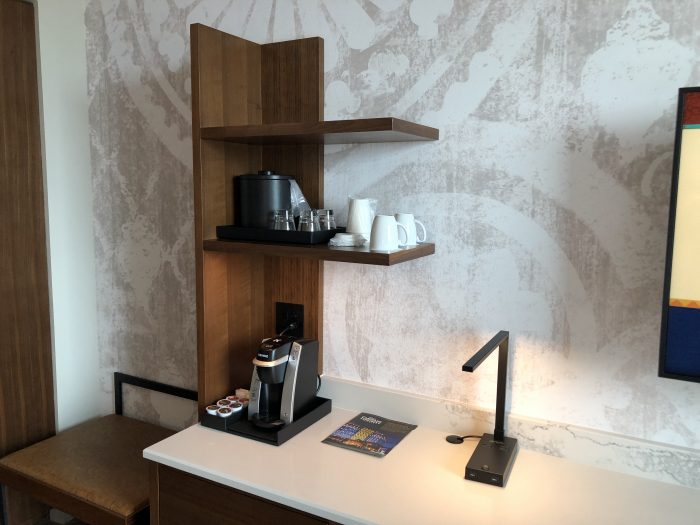 Most standard rooms have two queen beds; a few have one king bed. The beds and bed linens are comfortable. Pillows are a bit firm, and slightly fluffier than average; most people should find them comfortable. There is space underneath the beds for suitcase storage. 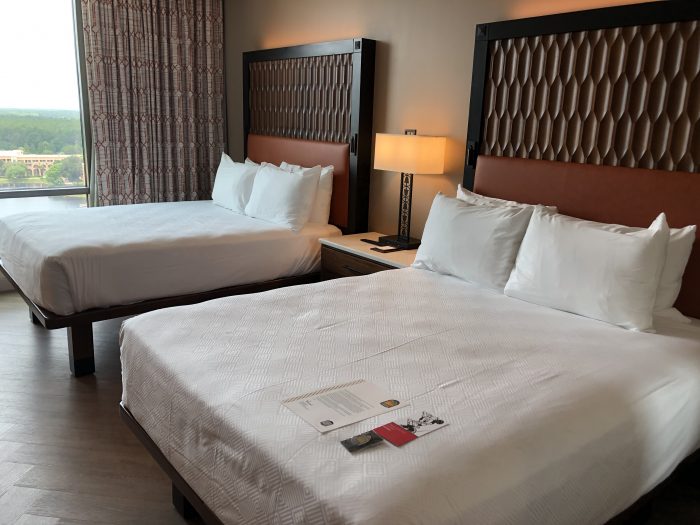 Gran Destino’s bathrooms are well-designed and spacious. Separated by a sliding “barn” door from the main living area, the bathroom’s main area features two sinks, a walk-in shower with both a hand-held shower head and a ceiling-mounted “rainfall” shower head. The bathroom vanity cabinet has plenty of storage and shelf space, and a very large mirror. That mirror includes side lighting to complement two sets of overhead lights, making the overall lighting very good. A separate door inside the bathroom holds the toilet. 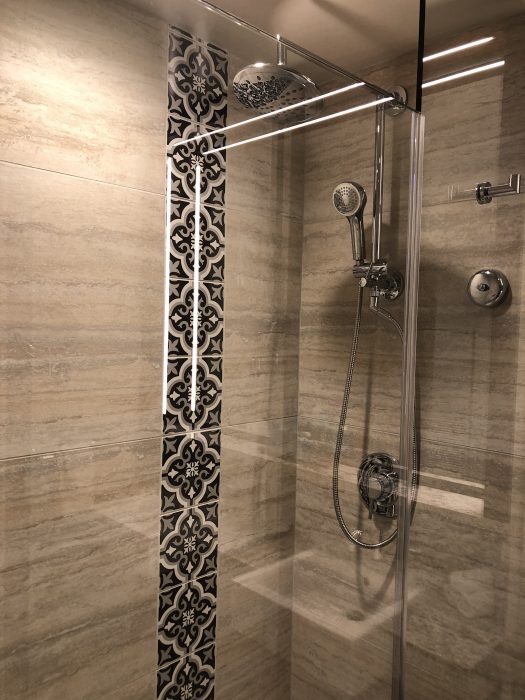 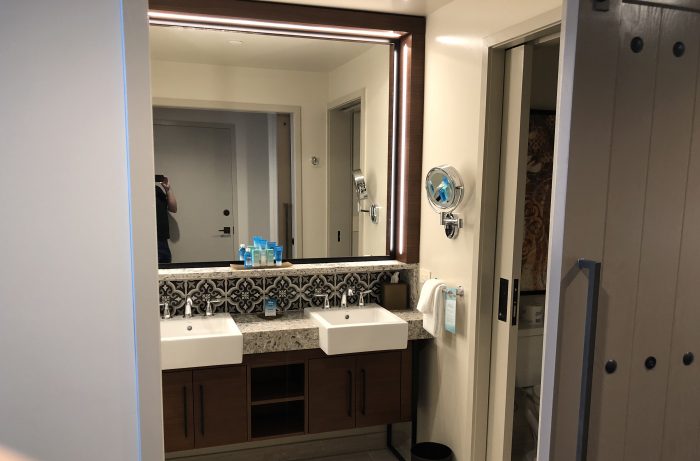 Standard View rooms with Club Access are identical in layout and size to the Standard rooms described above, but with access to the Chronos Lounge.

Deluxe Suites come with Club access and are found on floors 3 through 15 – these rooms are located in the ‘elbows’ of the resort – where the tower’s wings meet the main structure. It looks like there are three one-bedroom suites, on floors 12, 14, and 15. Two Presidential Suites are available, on floor 15.

The Chronos Lounge is among Disney World’s largest and most well-appointed concierge lounges. Substantial food is available at breakfast, lunch, and dinner, with snacks served the rest of the day. Service is very good. 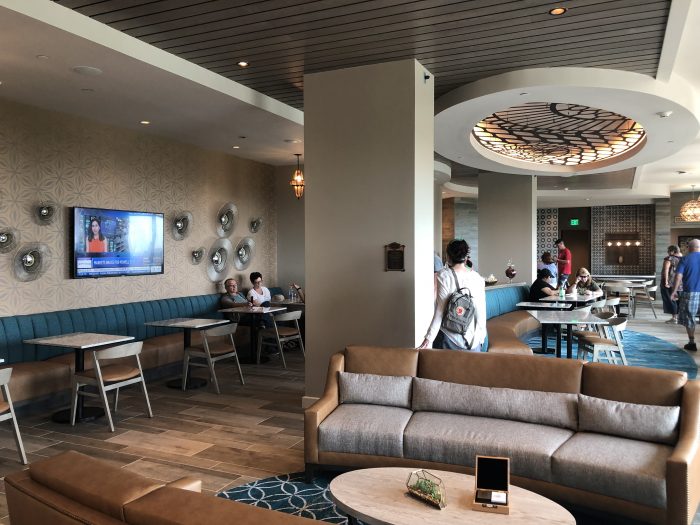 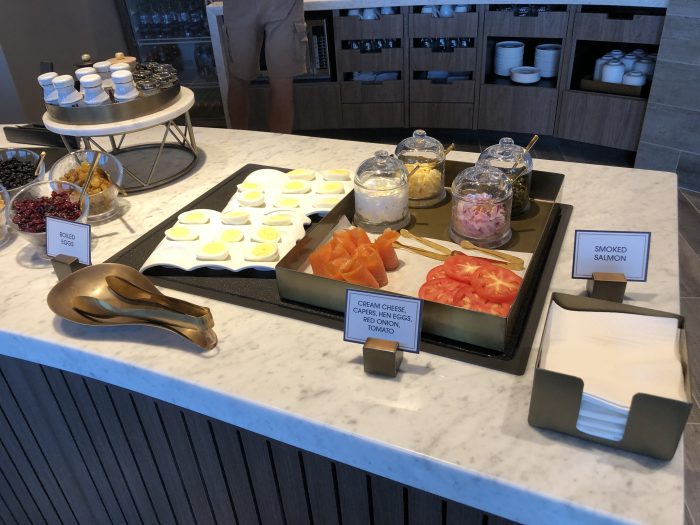 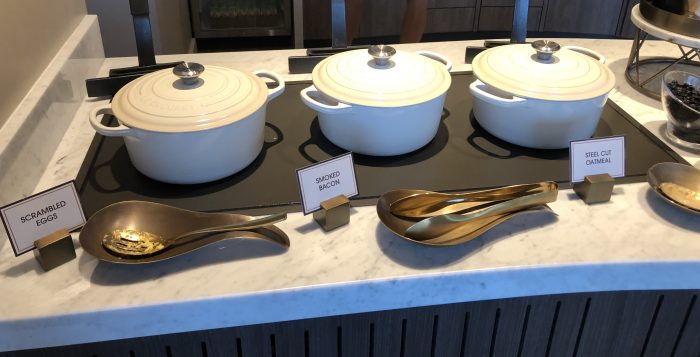 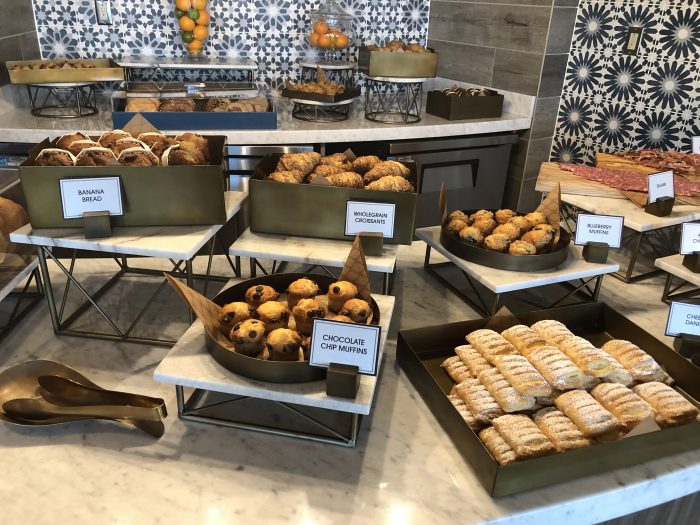 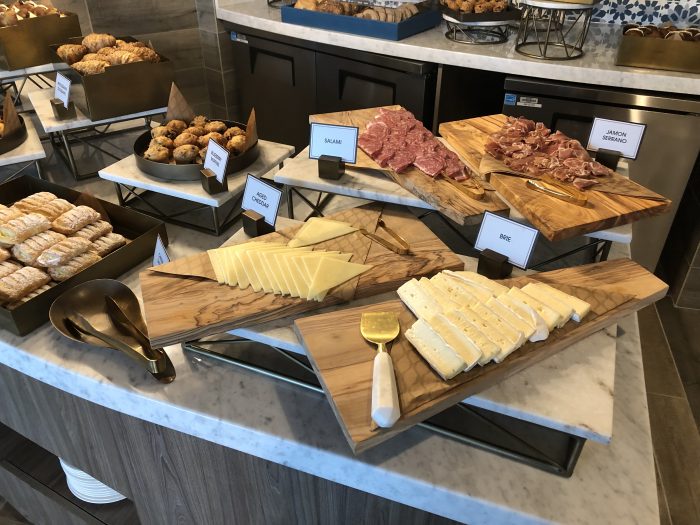 In short, the Gran Destino Tower in Coronado Springs is the most upscale offering in Disney’s Moderate resorts category, with well-designed rooms, colorful, work-friendly public spaces, and better-than-average dining and bars. A particular value is Gran Destino’s standard Club-level rooms, which include all-day access to the Chronos lounge’s food and drinks. These rooms start at $410/night with tax, at least $150/night less than Club-level rooms at other resorts.

In part 2 of the review, we will be covering dining options at Gran Destino Tower, but here’s a little teaser to tempt your palate. 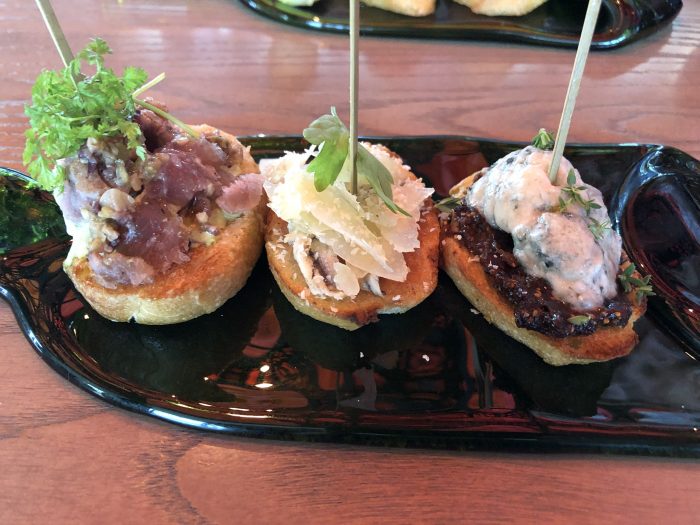 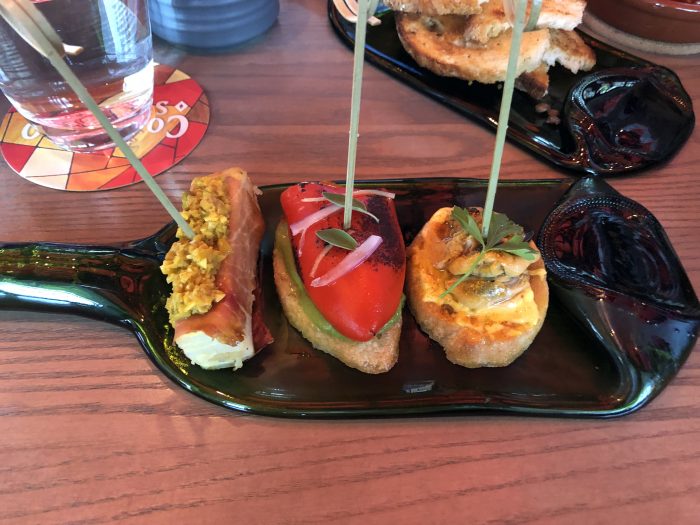 Have any questions about this new resort? Does it look like a place where you’d want to stay? Let us know your thoughts in the comments. 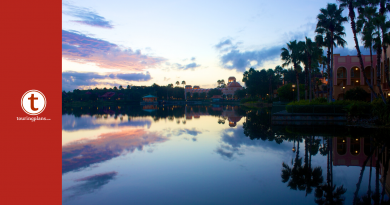 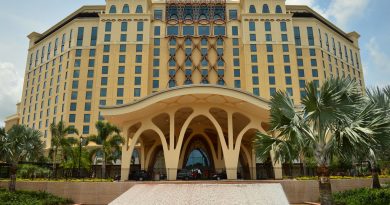