The January 2020 Crowd Calendar update is now live. We just got past the busiest time of year at Walt Disney World. The holiday crowds took a bit longer to build, but by December 23, crowds were at peak level. 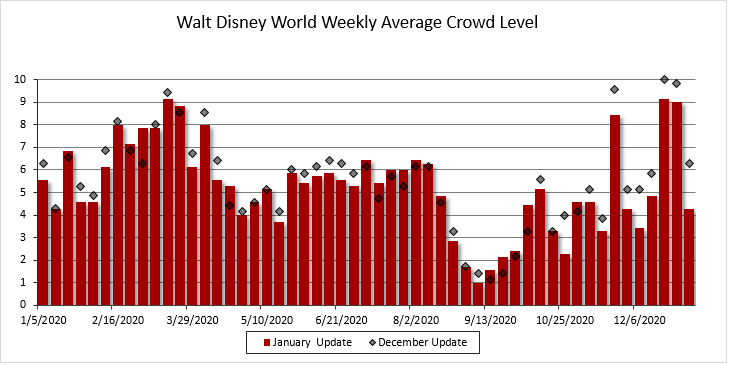 The big unknown going into December 2019 was what would happen at Disney’s Hollywood Studios after Rise of the Resistance opened. To everyone’s surprise, the headline attraction at Star Wars Galaxy’s Edge has operated only with a virtual queue, called Boarding Groups. The Boarding Groups fill up quickly, so guests must arrive early in order to experience the new ride. Evening crowds have been lower since many people are completing everything at Hollywood Studios early. With the limited capacity of the Boarding Groups, it seems that the overall park attendance is dampened. In this update, many days at Hollywood Studios crowd levels have gone down. At some point, Disney will likely drop the virtual queue and give the Star Wars attractions FastPass+. We don’t know when this will happen.

The first six days of the new year will still be filled with Christmas and New Year’s crowds. And once these folks leave, they will be quickly replaced by those involved in the Walt Disney World Marathon events the following week. Martin Luther King, Jr. Day weekend (January 18-20) will also have high crowds.

The Mickey & Minnie’s Runaway Railway ride opens on March 4, 2020, at Disney’s Hollywood Studios. It will be interesting to see how Disney will operate the ride. Will it offer FastPass+? Be standby-only like Millennium Falcon: Smugglers Run? Use a virtual queue like Star Wars: Rise of the Resistance?

Most schools will be on summer break by the end of June. Over the past three years, summer has not been peak season. The summer heat and longer park hours help spread out the crowds. On January 2, Disney announced “free dining” for Summer 2020. The opening of Remy’s Ratatouille Adventure at Epcot will be used as a draw to bring in the guests.

The further we look into the future, the less we know about school schedules and about Disney’s plans, in general. In April and May, schools will start finalizing their schedules for the 2020-2021 school year. Until we have updated school schedules, crowd levels for Fall and Winter 2020 are based on data from previous years.

2021 is the 50th anniversary of Walt Disney World. We expect Disney to have a 16-24 month celebration. Guests who do not go to Walt Disney World every year will likely postpone their vacations until 2021. Disney’s marketing will be in full force, trying to entice guests to visit before the 50th anniversary celebration. Operations at Hollywood Studios and Epcot will fluctuate with new rides and construction.