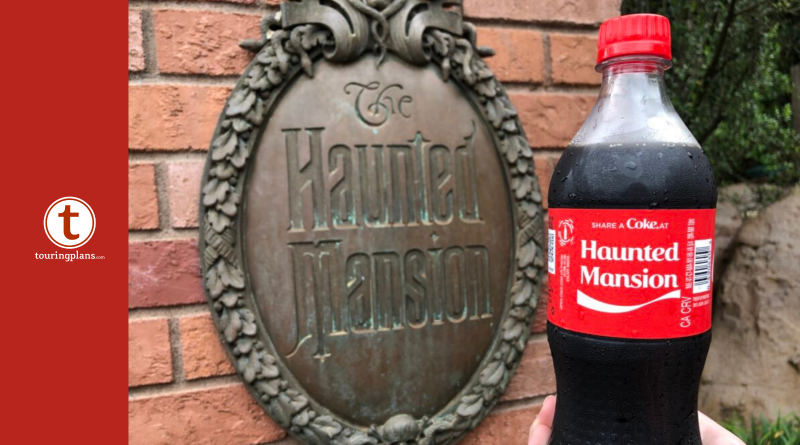 Let’s start off by saying that soda (or pop, if you’re from the Midwest) prices at Walt Disney World are outrageous. Yes, you can go to almost any supermarket and buy several two-liter bottles of Coke for the price of one single serve beverage purchased within the confines of Walt Disney World. Yes, you should bring your own drinks to the parks to save money. Yes, you should probably save your intestines and the planet by just drinking water from a reusable bottle. Yes, yes, yes, I know.

Given that, here’s what you need to know …

Where can I buy soda at Walt Disney World?

Kinda everywhere. Soda is available at every WDW restaurant, from Victoria & Albert’s to the smallest snack cart. There are vending machines in every hotel and fountains in every food court.

What kinds of soda are available at Walt Disney World?

Disney has the contract to end all contracts with Coca-Cola. All the soda sold in the WDW theme parks and resorts is owned under the Coke umbrella. You might find Pepsi at your off-site hotel, restaurant, or gas station, but you will NOT find it on Disney property.

Easily found bottles include Coke, Diet Coke, Coke Zero, Cherry Coke, Sprite, Sprite Zero, Barq’s Root Beer, Fanta Orange, and Fanta Pineapple. The smaller snack stands in the parks may only have the basics from this list, but Disney hotel food courts and/or gift shops will have most of these for sale in bottles. Other Coca-Cola-owned soft drinks, such as Minute Maid lemonade, Gold Peak iced tea, Vitamin Water, and PowerAde are also available.

That may seem like a lot of options, but my favorite soda isn’t on the list. Are there alternatives?

Some of the resort food courts now have Coke Freestyle Machines – the dispensers where you can create a personal mix of any of several dozen variations of niche Coke products.

There are Freestyle machines in the food courts at the Beach Club, Grand Floridian, Caribbean Beach Resort, Riviera, and Port Orleans French Quarter. Others resorts may install them at future dates.

I love the Freestyle machines, but I’m not staying at one of those hotels, are there other options?

How much does soda cost at Walt Disney World?

This is the million dollar question. And depending on how much soda you drink, it may feel like you’re spending a million dollars.

The real answer is that the price of even a commodity item like Coke varies wildly at Walt Disney World, depending on where you buy it, what sort of container it comes in, and possibly how long you’re staying at Disney world. The per-ounce cost for Coca-Cola at WDW varies from a high of about $0.40 to free.

I like free. Where can I get free soda?

In years past, anyone could get free (well, included in the price of park admission) unlimited samples of several of Coke’s international brands at the Club Cool station at Epcot. Club Cool has been demolished and is currently a construction zone, so that’s no longer an option. There has been talk of it being reimagined and reopened at a later date, but no details have been released.

Disney Vacation Club members have free access to a Coke Freestyle machine in the DVC members-only lounge at Epcot. The caveats here are obviously that you have be a DVC owner (very much not free) who meets Disney’s point purchase requirements, the lounge has to be open, and you have access to your membership card or enough details for them to let you into the lounge.

OK, well, none of that works for me. How can I get cheap soda at Walt Disney World?

If you’re a big soda drinker and are staying at a Disney-owned hotel, the cheapest per-ounce method of soda acquisition will likely be the length-of-stay-refillable mug (often labeled “Rapid Fill” mugs). Every WDW resort food court sells refillable plastic mugs (with lids and handles) that can be used at the fountains at the resort food courts. Currently, the mugs cost $19.99 plus tax, or if you’ve purchased the Disney Dining Plan you will have a mug included in your package.

The mugs can be filled with soda (or coffee, tea, and a few other options) as often as you like for the length of your stay, for the one price. So if, for example, you’re staying at WDW for ten days and you refill your mug four times a day with 12 ounces of soda, you’ll be paying about four cents per ounce of Coke.

There are lots of rules about using the mugs: you can’t use them at the theme parks, you can’t use them at the hotels on property not owned by Disney (Swan/Dolphin, for example), and so on. But if you’re a big soda drinker, will be spending a significant amount of time at your hotel, and don’t mind carrying a plastic mug around with you, then the Rapid Fill mugs are a good deal.

The refillable mugs don’t work for me. If I’m not using one, how much will a soda cost at my hotel?

Every Disney resort hotel has a food court and a gift shop. At both you can currently buy soda in standard 20 ounce single-serve bottles for either $4.19 or $4.22, depending on where you purchase. (Disney World spans two Florida counties with slightly different tax rates, thus the small difference.) At the $4.19 price, soda will cost you a whopping 21 cents per ounce.

Are there packaged soda alternatives?

Yep. And hang onto your hat, because this is wacky. In addition to the ubiquitous 20-ouncs single serve sodas for $4.19, the WDW hotel gift shops also sell two-liter (about 68 ounces) bottles of soda for $3.99. Yes, you’re reading that right. You can buy 68 ounces of soda for 20 cents less than 20 ounces of soda — often in the exact same refrigerator case.

Additionally, most WDW hotel gift shops sell six-packs of 12-ounces cans of soda, currently priced at $8.99. If you buy your soda in this form, 72 ounces of soda will cost you more than double the price of 68 ounces of soda — again, often sold side by side. The upcharge for convenience is obviously substantial.

Are there any other soda price oddities in the hotels?

Of course there are. If you have a WDW annual pass, you can bring down the price of standard $4.19 single-serve soda by 20% if you purchase it in your WDW hotel gift shop. However, if you buy the exact same item in the food court, there is typically no discount available.

What about bottled soda in the theme parks?

Most WDW theme park shops and food carts sell single-serve bottles of soda for $4.19 or $4.22, depending on the location. If you have an annual pass, you can get the 20% off if you buy the soda in a shop, but not if you buy it at a cart.

There may be other discount variations if you have a Disney Vacation Club membership, or other Disney affiliation.

What’s the deal with fountain drinks in the WDW hotels?

If you don’t have a Rapid Fill re-fillable mug, you can still buy fountain sodas at the WDW resort quick-service restaurants. Pay for a fountain drink at the quick service venue and the cashier will give you a paper cup. Sounds pretty standard, right? Well, not exactly.

The paper fountain soda cups at the WDW quick-service restaurants are embedded with a chip that allows you only three refills of the cup. Further, the cup may only be used within a designated time period. Sensors on the soda fountains read the cups and know if you’re taking more soda than you’ve paid for, or if you’re trying to use an unapproved vessel.

Okey dokey, so how much is my fountain cup going to cost?

The standard fountain soda at WDW costs $3.99, plus tax. Some locations may have a larger size available for $4.49. Prices are the same for fountain drinks at quick-service locations in the theme parks. The cups are similar size to the single-serve bottles sold throughout Walt Disney World, but remember that some of the quantity will be likely be filled with ice rather than soda.

Are there any anomalies with soda pricing in the parks?

I’m aware of one glaring exception to the standard soda pricing. On Batuu (Star Wars: Galaxy’s Edge) at Disney’s Hollywood Studios, the soda is sold in round bottles, shaped like thermal detonators. The content is the same Sprite, Coke, or Diet Coke you can find anywhere in the USA, but the bottle is fancy. The round bottle capacity is 13.5 ounces, currently priced at $5.49 — or a whopping 40 cents per ounce.

Adding insult to injury, there are often no price signs on the soda carts at Galaxy’s Edge. You’ll walk up and order, having no idea that your tiny bottle is $5.49.

I’ll forgive you for buying one for a fun souvenir (I did), but after that it’s just silly.

Anywhere else that doesn’t say the price of what you’re buying?

Most of the soda vending machines at WDW are missing obvious pricing signage.

Do all the restaurants at Walt Disney World have the same prices for soda?

Most do, but not all. If there is going to be a variation, it will almost certainly be at a restaurant not operated by Disney itself. Places like the Swan & Dolphin set their own prices. You’ll also find plenty of restaurants at Disney Springs that operated by someone other than Disney. For example, walking by Chicken Guy at Disney Springs I noticed that their standard fountain soda price is $2.99 rather than the $3.99 charge by Disney venues.

I’m still salty that Club Cool is not at Epcot. Do you have any ideas?

There’s an entire multi-story Coca-Cola store at Disney Springs where you can get trays of international soda flavors. It’s not free though; a sampler tray will set you back $11. Good news though, the basic fountain drinks here are a dollar less than those at the Disney quick service venues.

Can I bring my own soda into the Disney parks?

The security checkpoints at the park entrances are looking for weapons and glass. Plastic soda bottles are fine to bring into the parks.

If you’re a soda drinker, making a stop at a grocery store, or even getting a hotel food delivery can save you ooooooodles of money.

And if you’re a real rebel, you can bring in bottles of Pepsi!

Got any weird Disney soda-related tips?

So folks, does this convince you to stick with water? Do you bring your own beverages into the parks? Do you have any soda tips for other Disney travelers?

Let us know in the comments. 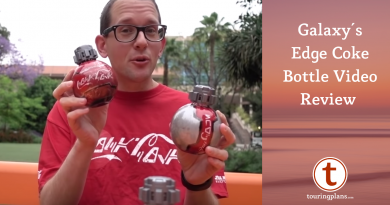 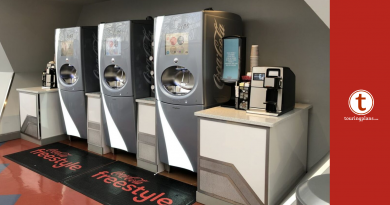