Our What I Love post today comes to us from long time Liner, TouringPlans Subscriber, original WDW Today podcast listener (shout out to Scopa Towers), and Unofficial Guide to Walt Disney World reader, Andrew! Andrew and his family got a fantastic surprise that resulted in some pretty sweet memories.

We took our third family trip to Walt Disney World in 2007. We won a trip through our rental car company that included a stay at the Grand Floridian – a resort we couldn’t afford on our own. Since much of the trip was paid for as part of our prize, we were able to do multiple character dinners. We also added a few days to the park tickets we won and even added a few extra nights at Pop Century. We used the Unofficial Guide to Walt Disney World and the WDW  Today Podcast –  two extra special memories of ours.

After hearing Len, Mike, Mike, and Matt talk about it on the podcast, we asked and were allowed to ride in the pilot compartment of the monorail and got our pilot’s licenses. A tip (also from the podcast!) on where to watch the parade in the Magic Kingdom led to our daughter, Rebecca, getting picked by a Cast Member – she was given two pins! One pin to keep and one to give away.  The Cast Member then led us to a spot near the Liberty Square Bridge just to the side of Cinderella Caste. We were given seats on a bench and, since there were no guests seated on the other side of the path, all of the characters that went by were facing us the entire time. It was the best parade view anyone could have!
One of our table service reservations was at The Rose and Crown in the United Kingdom Pavilion at EPCOT. We ate inside the main dining area, but a wonderful Cast Member managed to slide us in to the outside patio area just in time for an amazing view of  IllumiNations: Reflections of Earth.
We’re really looking forward to going back to Walt Disney World someday soon!
We hope you get back there soon too, Andrew! We can’t wait to hear about your new magical memories when you do.
If you haven’t had a chance to send in your memory and photos, please submit them to christina@touringplans.com and we will include you in this series. 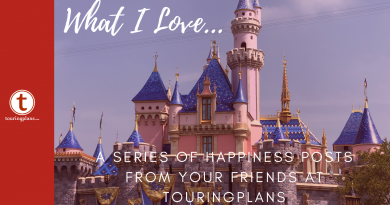 What I Love! Birthday Magic!

What I Love! Snacks!