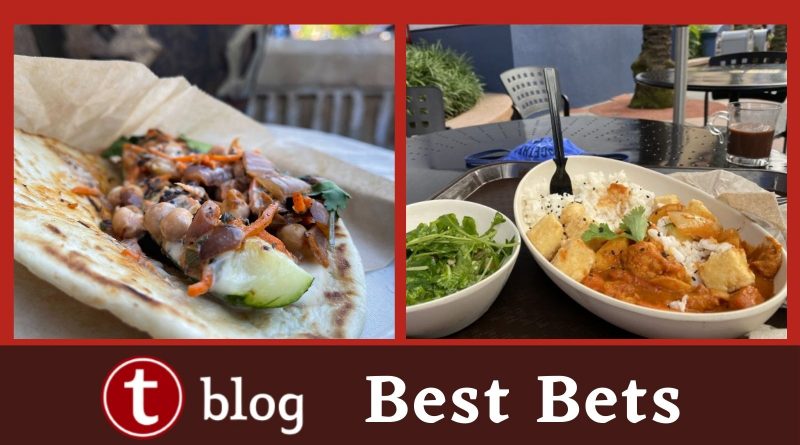 Here are our five reasons Disney’s Hollywood Studios is the best for plant-based food.

Bonus! The specialty Blue Milk and Green Milk of Star Wars Galaxy’s Edge is plant-based too! This is a big help to families like mine. Our little guy cannot have dairy, so we love being able to enjoy this specialty beverage together without worry. One down side for pretty much all four Disney World theme parks is the lack of plant-based desserts.

The plant-based Zucchini Ronto Wrap is full of delicious vegetables without any dairy or “fake meat.” Grilled Zucchini, Smoky Chickpea-Onion Slaw, Creamy Garlic-Tahini Sauce, and Fresh Cilantro are wrapped in Pita Bread, and it is a combination that is out of this world. Anyone that loves veggies in the meal, whether they be an omnivore or herbivore, will appreciate this new addition. This delicious wrap sealed the deal for our team to put Hollywood Studios at the top of our list for best plant-based food at Walt Disney World.

My personal favorite quick service dish in any Walt Disney World theme park is the Curry Rice Bowl with Tofu. Available at ABC Commissary, this bowl is full of savory flavor thanks to the Red Curry Sauce, balanced with sweet Crispy Pineapple-marinated Tofu and Sautéed Vegetables served with Jasmine Coconut Rice, which is also sweet and always incredibly fluffy.

This next dish takes us back to Batuu, and it borders on the “fake meat” spectrum. The Felucian Kefta and Hummus Garden Spread at Docking Bay 7 is a favorite for many Disney diners. Plant-based Meatballs, Herb Hummus, Tomato-Cucumber Relish, and Pita Bread make this a hearty, but not heavy, entrée.

Now we are full on into “fake meat” territory with the Spicy Italian “Sausage” Sub at PizzeRizzo. This dish is worth it to cross the “fake meat” picket line. Oven-roasted Sweet Bell Peppers, Savory Onions, and Mushroom Medley with Marinara Sauce top the Plant-based Sausage, making this a spicy sub, but full of earthy, sweet roasted veggies to balance it all. Plus this sub is served with choice of side so it is a good value.

Over at Toy Story Land, you’ll find Woody’s Lunchbox which is one of the most popular quick service locations in the park. The Plant-based “Totchos” are one of the lowest price entrees in the park, yet it is still a generous serving. Heaps of “Chili”, “Cheese”, Green Onions, and Corn Chips are served over Potato Barrels, and everything is plant-based.

You may have noticed we’ve focused on quick service options only. The quick service dining locations at Hollywood Studios are have consistently strong thumbs up ratings from our subscribers. You can check out ratings for all Walt Disney World dining options on our site. We’ve found that most table service restaurants across Walt Disney World property do a decent job of providing plant-based entrees that are well rounded and not chock full of “fake meat.” But, we’d love your input too.

Which park has your favorite plant-based food? Let us know in the comments!