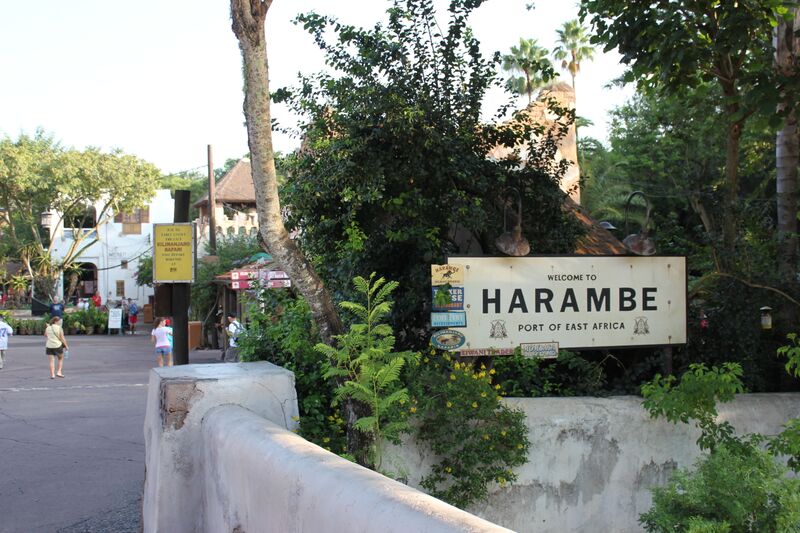 In our second segment of music from Disney’s Animal Kingdom, we go to the section of the park that revolves around Africa. This area includes a village called Harambe and the attractions Kilimanjaro Safaris and Festival of the Lion King.

Harambe Village (and its market) has a nice variety of music in its area. It doesn’t stick to the norm, but mixes styles that make you feel like you’re in a real African village.

The village was created as a good connection to the savannah that you see in Kilimanjaro Safaris. The idea was that people who lived in the village would be in charge of the savannah and the safari rides. There’s a lot of history shown through the weathered buildings, fort, and canons. But the area music brings out the modern style.

Harambe Village has a nice mixture of pop and cultural sounds. All of the artists you can hear in the village are artists from all over the African continent. Here are a few of the pieces heard in the area:

The entire loop is huge, so you probably won’t hear all of it when you are wandering the village. But it covers so many wonderful styles, and most of it can be purchased on music sites!

There are two acts currently that perform in Harambe Village. The first is called the Burudika Band, which uses keyboard, saxophone, and percussion in their set. Their sound is a lot like the area music that is heard in the village.

The second group you can hear is the Tam Tam Drummers of Harambe, which I heard in my last trip. Not only do they use a lot of different percussion sounds – from drums to shakers and the like – they also get the audience involved through clapping and dancing. This group really brings in the energy, and it’s hard not to get caught up in their act! If you’re in the Animal Kingdom, just listen for the rhythmic drums. That probably means they’re playing their set, and you should go find them! Near Harambe Village is a set of percussion instruments, very similar to the ones found in the African Outpost in Epcot. There, anybody can pick up an instrument and start playing whatever they want. There isn’t any area music playing in this section, so anybody can create their own sound for that part of the park.

You probably won’t get a big crowd like the Tam Tam Drummers or the Burudika Band, but bring a big enough group together and you can create great music!

Which live group do you enjoy at Harambe Village? Have you created some great percussion music on your own in the parks? Do you have a favorite song heard in the Harambe Village area of Animal Kingdom? Comment below!