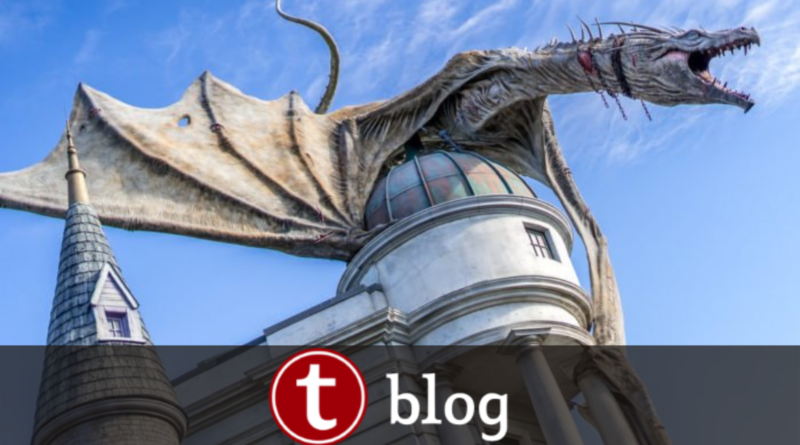 Universal’s new Epic Universe theme park is pouring foundations, refurbishment projects continue around the resort, Mardi Gras keeps rolling, and more in this month’s edition of Around the Universe!

Yesterday our stat wizard Fred published an update to our Universal Crowd Calendars. Turns out a lot of people are visiting Universal Orlando! Read up on the changes and future updates in his article.

News Around the Resort

As with the beginning of every year, the word of the day around the resorts is “refurbishments” (also “beignets”).

In Islands of Adventure, the exterior and interior refurbishment of Poseidon’s Fury walkthrough attraction continues. Poseidon closed in August 2020 as part of cost-cutting due to the COVID-19 pandemic and has yet to reopen. Permits for pump replacements and visible exterior work began last year in preparation for reopening. With extensive work finishing up we hope the attraction reopens soon.

Meanwhile, at Seuss Landing, the Caro-Seuss-el continues its extensive exterior refurbishment and rebuilding. Universal has not yet given a reopening date for this family favorite attraction.

Note also nearby patching. Will also be repainted during the refurbishment. pic.twitter.com/B1vJsBiNVa

After numerous reports of Fear Factor Live’s stadium demolition for a new attraction, the current version of the project appears to be canceled. The rumored plan for this area was for a Harry Potter virtual reality attraction where guests rode broomsticks originally developed for Epic Universe. At this time we are not sure if the project is moving back to Epic Universe or if it is canceled at the new park too.

This month I am starting a new segment in Around the Universe – the Epic Updates! Universal’s new theme park, Epic Universe, was announced in August 2019 only for it to be put on ice in late spring 2020 due to the global pandemic. The project resumed in March 2021 and now, a year later, we are seeing the first vertical construction of the park starting.

Below is the future location of Super Nintendo World in the park. Foundations for the land along with the Donkey Kong coaster are poured.

#EpicUniverse SNW Land overlayed with where stuff should go , Dotted lines are the Coaster track layout. looks like the unusual forms are where I believe Yoshi queue is, so perhaps the stair well up to the load platform.
full analysis here: https://t.co/7rDmUbufbw @AliciaStella pic.twitter.com/V9Ysar0LeA

We are starting to see outlines and grading complete for the Monsters section of Epic Universe. This land is expected to have two attractions in it, the main being a Forbidden Journey style Kuka arm dark ride.

Aerial look at what is believed to be classic Universal Monsters land in Epic Universe. Arrow at what seems to be site dewatering. pic.twitter.com/fmZbL288jQ

Finally, below is the future traffic circle and roadwork that will lead into Epic Universe. The large clear area in the middle of the picture will be the parking lot for the new park.

Aerial look at roads under construction at Epic Universe. Destination Pwy at lower left, and street sign at this intersection is: Public Road.

Epic Universe is currently planned to open in 2025. Stay tuned to Touring Plans for more information as this brand new theme park progresses!

Snowstorms got you down? Cold creeping in? No problem! Contact the travel agents at Touring Plans Travel Agency to book a trip somewhere warm! They can book you on a vacation to Universal Orlando, Walt Disney World, Disneyland, Disney Cruise Line, and way way more. Receive your free quote today!