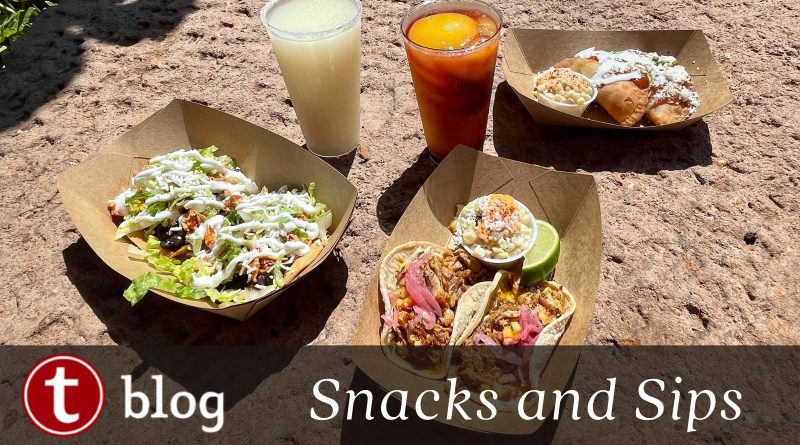 The Choza de Margarita stand at EPCOT’s Mexico Pavilion may look small, but the same can’t be said for its menu!

A popular destination for World Showcase travelers, Choza de Margarita sits to the left of the entrance into the Mexico Pavilion and right across the way from La Cantina de San Angel. 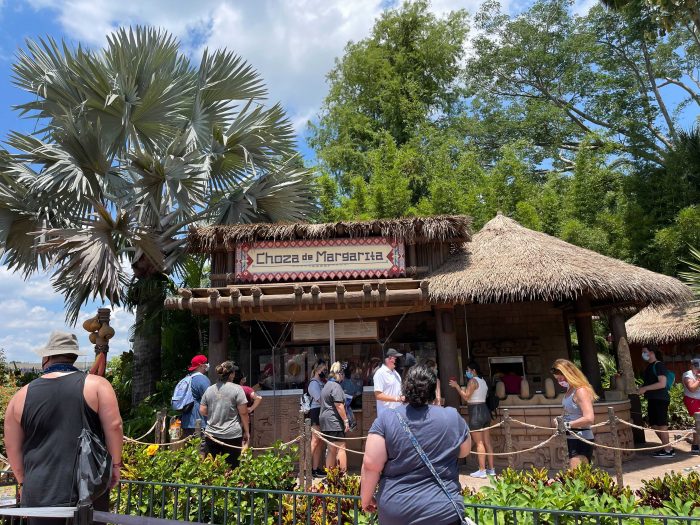 True to its name, Choza de Margarita serves, well, margaritas! But guests can also find a few small bites as well beginning when the stand opens at 11:00 a.m. and up to park closing.

Now even though Choza de Margarita is an outdoor stand, it’s owned by the same group as La Cava del Tequila and is incredibly well themed! And its setting certainly benefits from the pavilion’s signature pyramid in the backdrop. 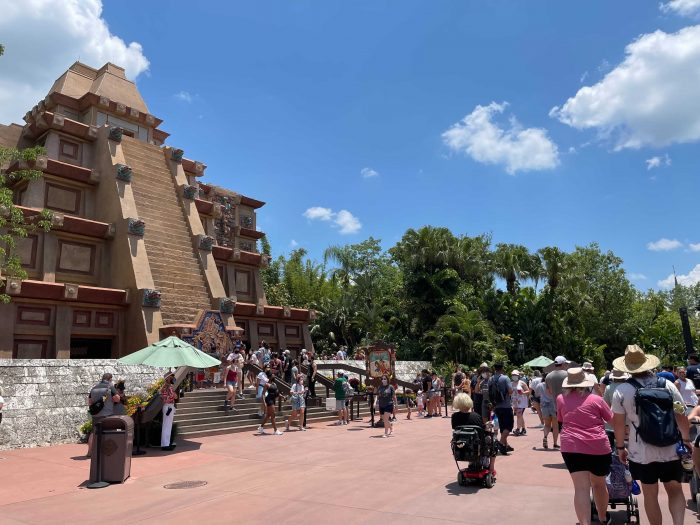 Unfortunately, there’s little to no dedicated seating near the stand. This is why many of its patrons stand along the surrounding walls to sample its offerings.
However, this has become even more problematic since guests must be stationary to eat or drink at this time, and since the Mexico Pavilion is often a bottleneck. If you can, designate someone from your party to secure a spot in advance, particularly in the shade.
If you’re looking to avoid a wait, know that lines are likely to form during the heat of the day and on into the evening. But in our experience, the lines move quick because the service is fast!

The Choza de Margarita stand offers a selection of their signature margaritas “on the rocks,” such as The Cucumber or the Smoky Pineapple which both come with a Tajin chile-lime powdered rim. There’s also the Wild Passion with a hibiscus salt rim, and the Top Shelf Clasica with an adventurous ant salt rim!
The stand is also home to a selection of beers, as well as a variety of frozen, blended margaritas like the Mango Loco, Wild Strawberry, the Fiesta, and Classic Lime. 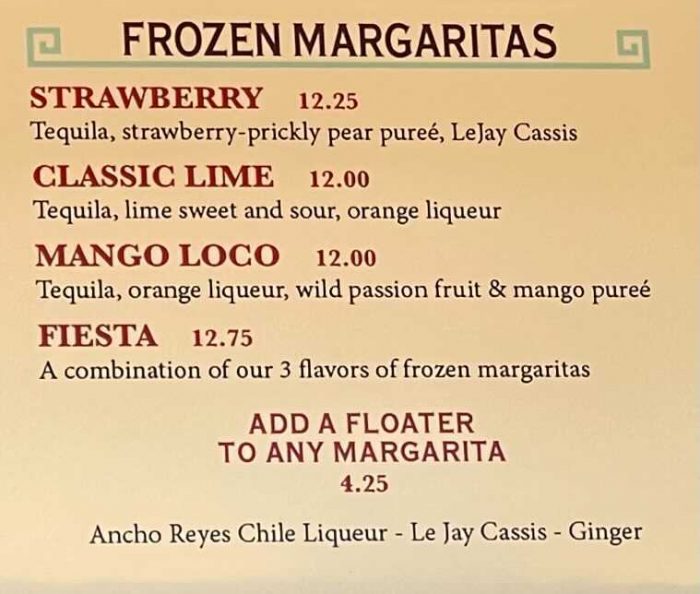 During a recent visit to EPCOT’s Mexico Pavilion, Chrissy brought some friends to visit the Choza de Margarita stand to sample the establishment’s frozen margaritas and small plates and to see if it lived up to the hype!
Classic Lime – $12.00 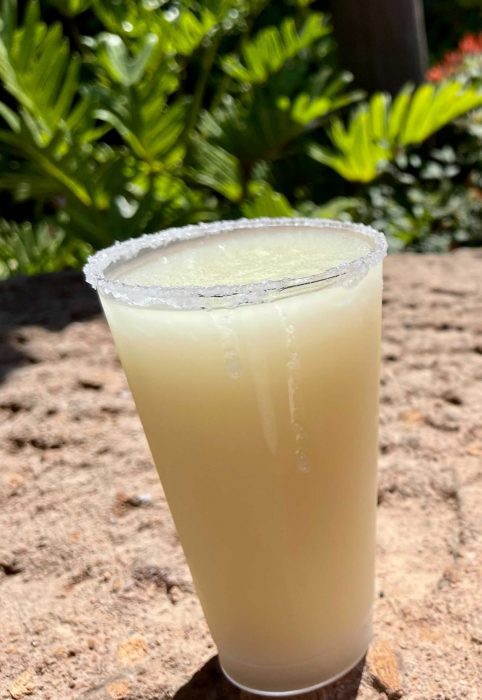 Thoughts on the Classic Lime Margarita? No complaints here! It was deliciously frosty and frozen, but with salt! And in Chrissy’s words, it’s perfect and a classic for a reason.
Mango Loco – $12.00 (with Le Jay Cassis Floater for an additional $4.50) 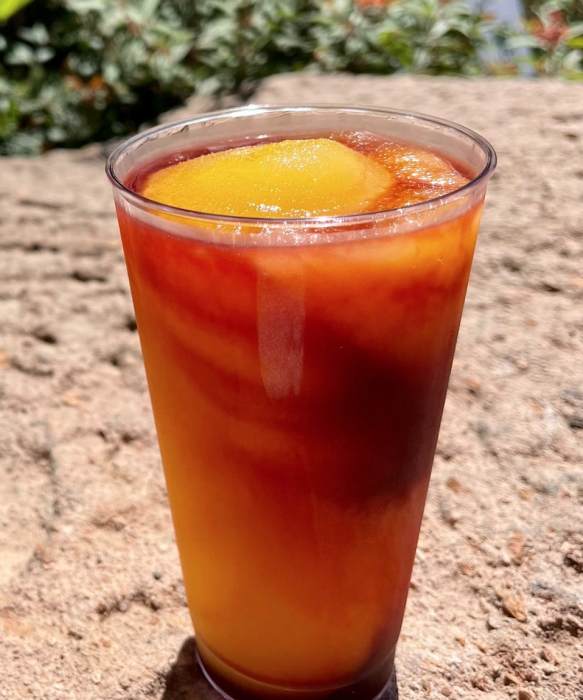 This frozen margarita is a blend of tequila, orange liqueur, mango puree, and wild passion fruit.
And according to Chrissy, there are several versions of floaters – a hot one (chile), a sweet one (Le Jay), and ginger. They equal an extra shot, and there are already two shots of tequila in the margarita itself, but all three were well hidden by fruity mango deliciousness!
Note: The “floaters” are on the physical menu board, but you won’t find them on the My Disney Experience app.

The small plates at Choza de Margarita range from tacos and empanadas to chips and guac (of course!), and even elote smothered in chipotle aioli and Tajin!

But for this specific review, we sampled the empanadas, tacos, and tostada. 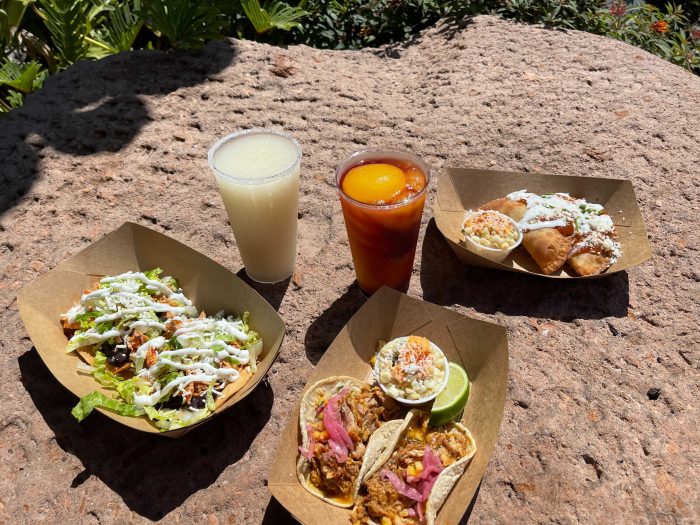 Empanadas de Barbacoa – $10.50
The stand’s menu describes the empanadas as filled with Barbacoa beef topped with Chipotle Sauce, Crema Mexicana, and Queso Fresco and served with Corn Esquites.
Basically, we recommend never passing the Mexico Pavilion without stopping for these. They’re crunchy with a creamy goodness and the very thing Chrissy says she will bring visiting friends and family to get as an accompaniment with a frozen margarita.
Tacos de Cochinita – $10.50
The Tacos de Cochinita are described as citrus marinated pulled pork on corn tortillas served with picked onions and a mango habanero relish.
According to Chrissy, these were wee bit spicy and small, but not bad at all and worth the price. But don’t set out to make them a meal unless you’ve already downed your drink.
Tostada de Pollo – $10.50
Brace yourself for crispy, corn tortillas filled with black beans, chipotle chicken, shredded lettuce, Crema Mexicana, and Queso Cotija.
Like Chrissy said, name one thing in that description that isn’t heavenly. Yeah, you can’t. And neither could we. Enough said.
Overall, EPCOT’s Choza de Margarita stand at the Mexico Pavilion aims to please and definitely succeeds. Our readers agree having rating the location a 93% thumbs up on the TouringPlans site.
But what do you think about Choza de Margarita? Is this stand a must-do for you? Let us know in the comments!

One thought on “Choza de Margarita – A World Showcase Oasis”