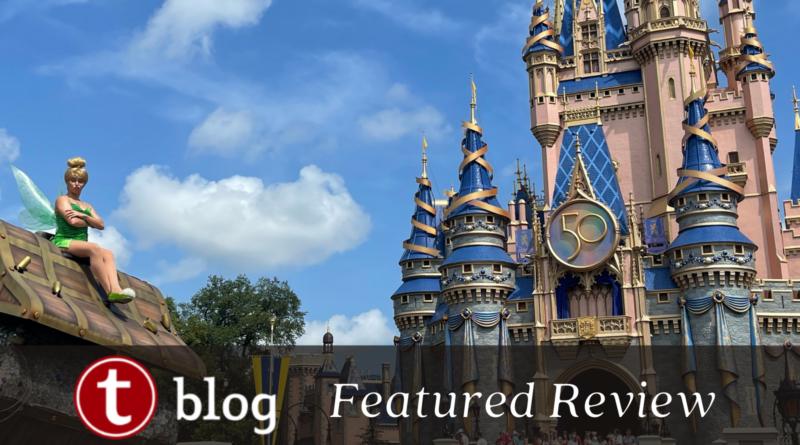 Of all the restaurants and dining experiences at Walt Disney World, it’s tough to beat Cinderella’s Royal Table in terms of location.

Located inside of the Magic Kingdom’s Cinderella Castle, guests at Cinderella’s Royal Table can enjoy breakfast, lunch, or dinner in a medieval-style banquet hall with stained glass windows overlooking Fantasyland! 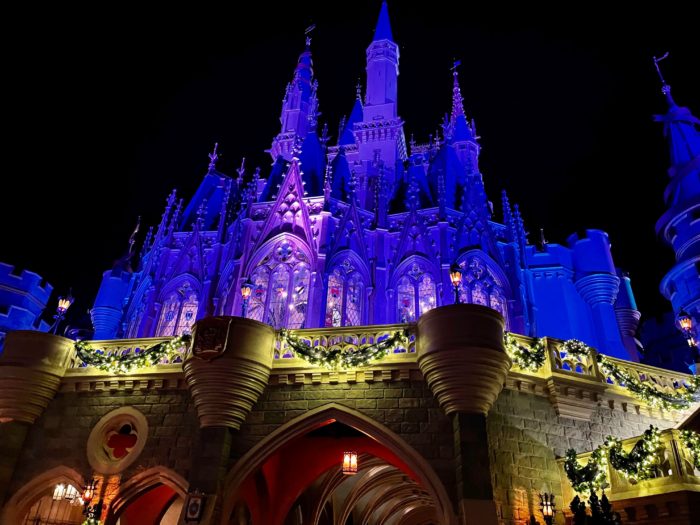 Once upon a time, Cinderella, the Fairy Godmother, and a rotating array of other Disney royals would meet with guests at their table; however, at the time of writing, only Cinderella makes a socially-distanced appearance. 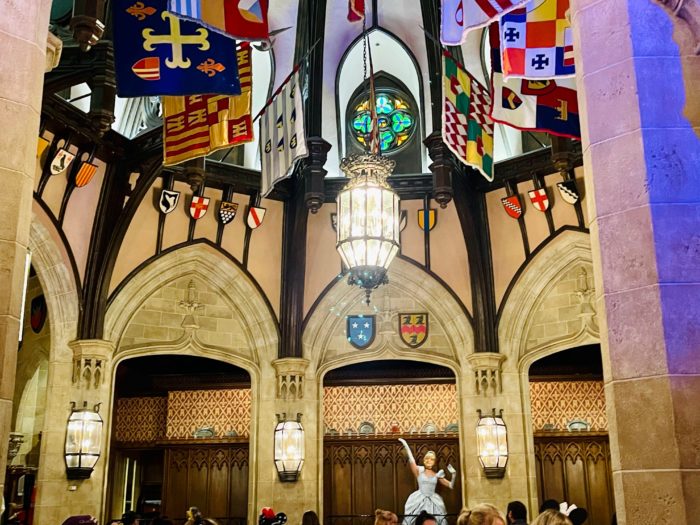 When passing through the castle breezeway from Main Street, U.S.A., guests will find the check-in desk and entrance for Cinderella’s Royal Table to their right as they enter Fantasyland. Once inside, guests can reach the dining room via a winding staircase or elevator. 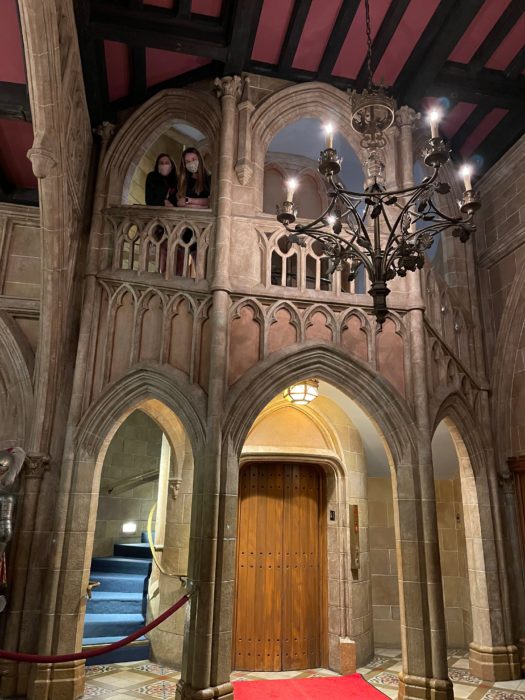 What You Need To Know

Now, Cinderella’s Royal Table is considered a signature dining experience meaning it’s one of the pricier options within the park and around Walt Disney World. It’s also one of the more difficult dining reservations to secure; however, thanks to Be Our Guest, it’s not as impossible as it once was in years prior and there is a walk-up list on the My Disney Experience app. 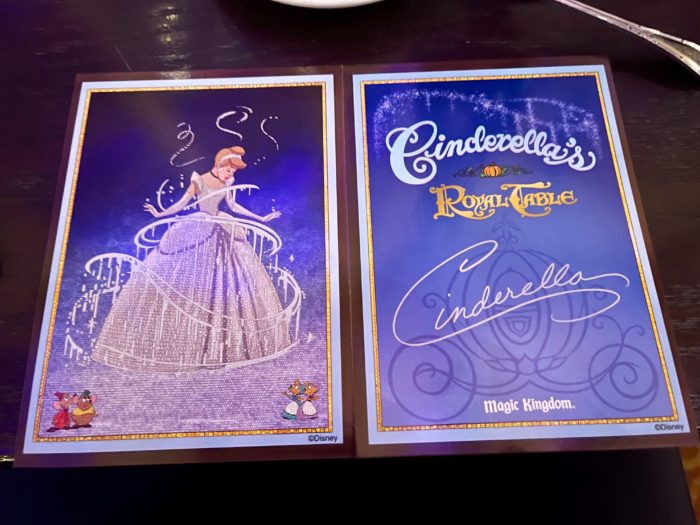 Guests can also make their dining reservations on the My Disney Experience app or on the Disney World Dining website. However, if you’re already within that 60-day window, check out our handy TouringPlans Reservation Finder!

At the time of writing, the restaurant is open for breakfast, lunch, and dinner, but its opening and closing hours tend to vary. Be aware that you must have a Magic Kingdom theme park pass reservation to enjoy Cinderella’s Royal Table, and an Annual Pass discount of 10% is available.

To answer that question, our park reporter Chrissy visited Cinderella’s Royal Table to check out its fixed-price dinner to see just how enjoyable this fairytale feast could be.

Upon entering the banquet hall with its rich tapestries and stone archways, Chrissy and her party were seated right by the stained glass windows! 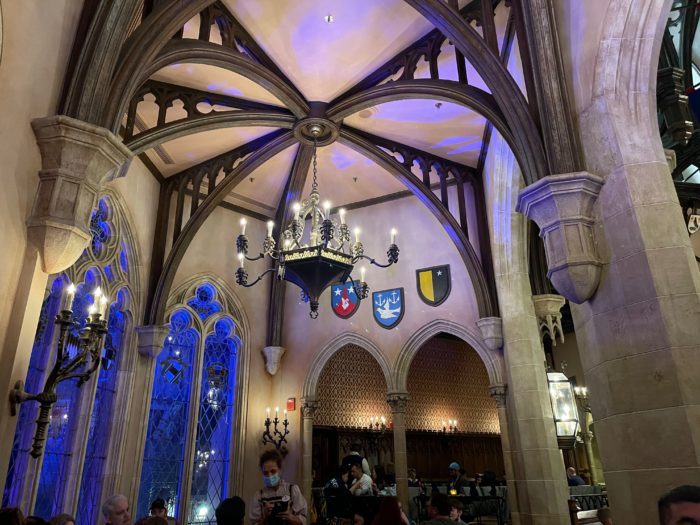 While the views don’t get much better than this, there was a downside. 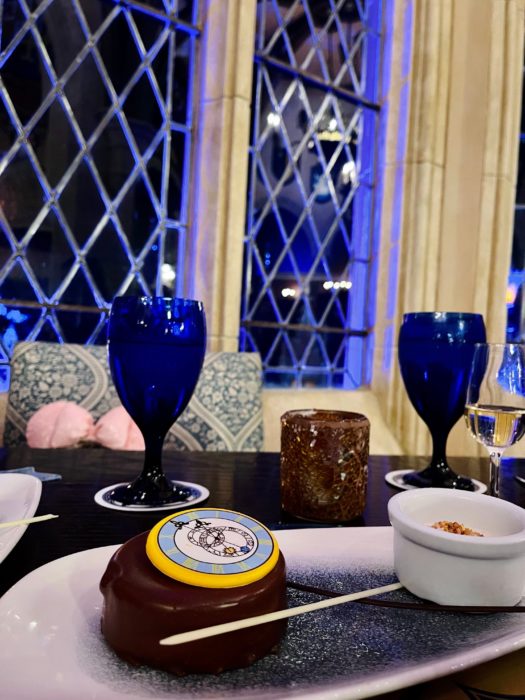 Since Cinderella has to greet guests from a distance, the tables near the windows are actually the farthest away from the princess. It’s something to be aware of if a Cinderella sighting is a priority for you and yours. 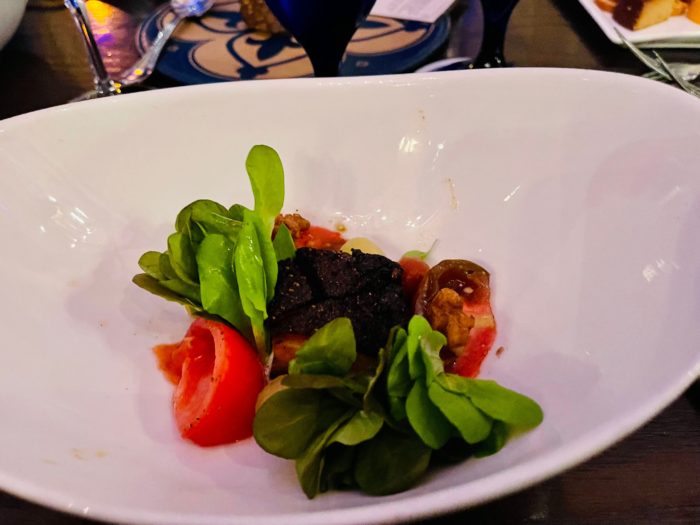 According to Chrissy, the salty pork belly and sweet tomatoes paired with the vinegar makes this dish something special. 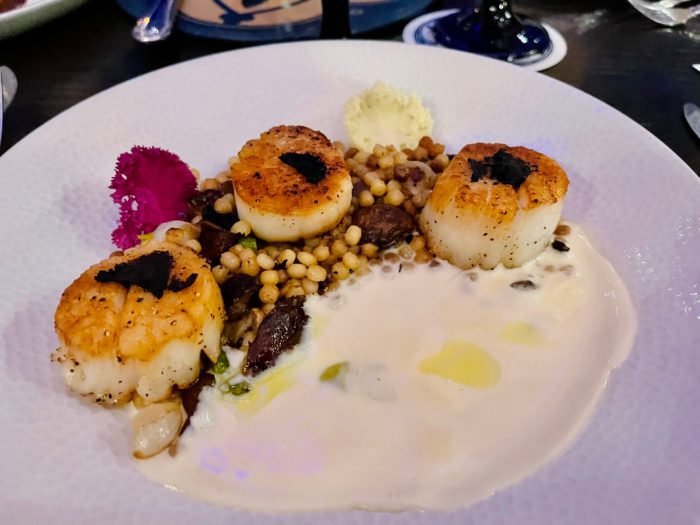 This pasta with sauteed onions, mushrooms, garlic, and a parmesan cream sauce was Chrissy’s server’s pick for an entree, and she was wise. This dish was perfectly cooked, filling, and delicious. 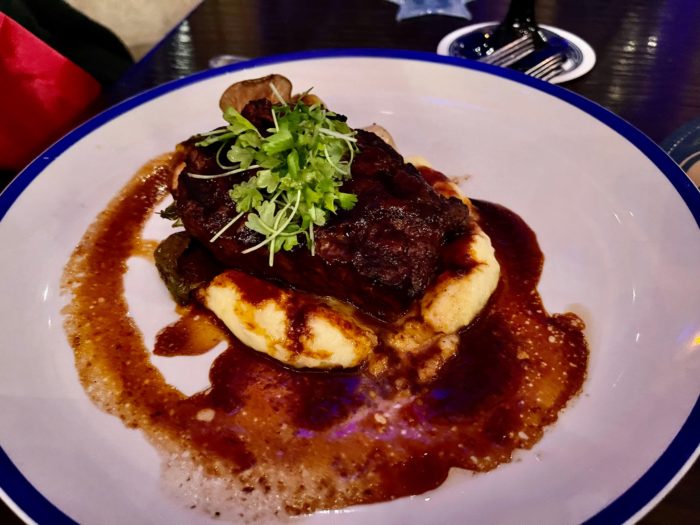 In our opinion, the Sauce Bordelaise remains the best sauce on property. Seriously, even if you order something else, make sure someone at your table gets the beef so you can taste this sauce.

It also comes with a side of whipped potatoes, maple-glazed brussels sprouts, and seasonal veggies.

Chrissy noted that this was the second visit where she and hers couldn’t decide on a dessert and the second time a sweet server just brought out everything. All were gorgeously plated and scrumptious, and she’s happy to report that you can’t go wrong. 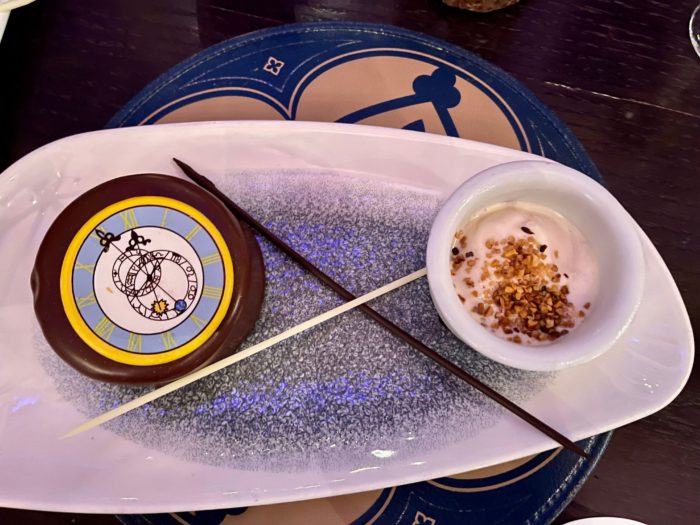 This clock-shaped dessert is appropriately called “The Clock Strikes Twelve” is a dark chocolate mousse with caramel, a crunchy praline center, and comes with chocolate sauce and hazelnut gelato. 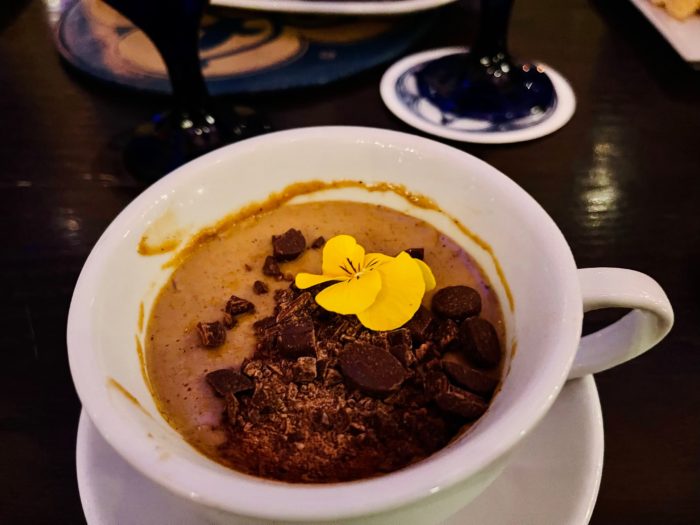 Next was the Coffee Pots de Creme, a plant-based treat consisting of coffee-infused coconut custard with chocolate-espresso beans. 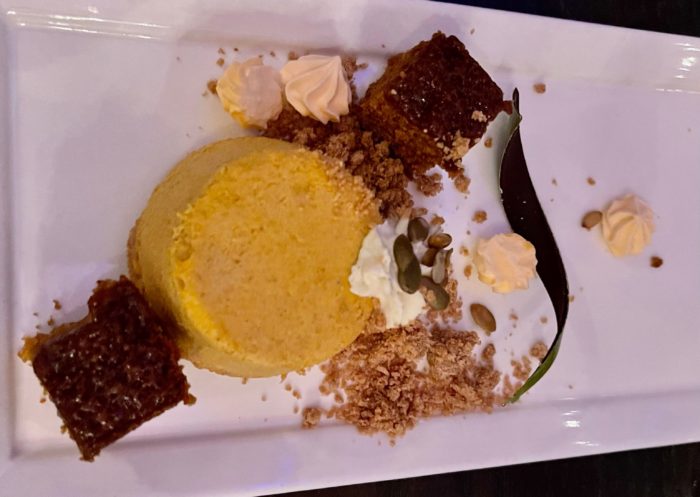 Lastly, Jaq & Gus is a cheesecake with seasonal flavors and garnishes! 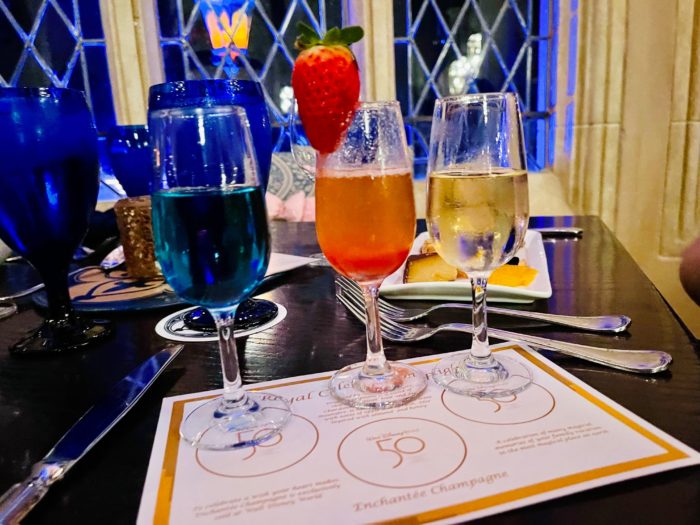 As one of the many anniversary-themed items available through Walt Disney World, Cinderella’s Royal Table features the Royal 50th Celebration Flight – a trio of champagne cocktails using Enchantée Champagne. 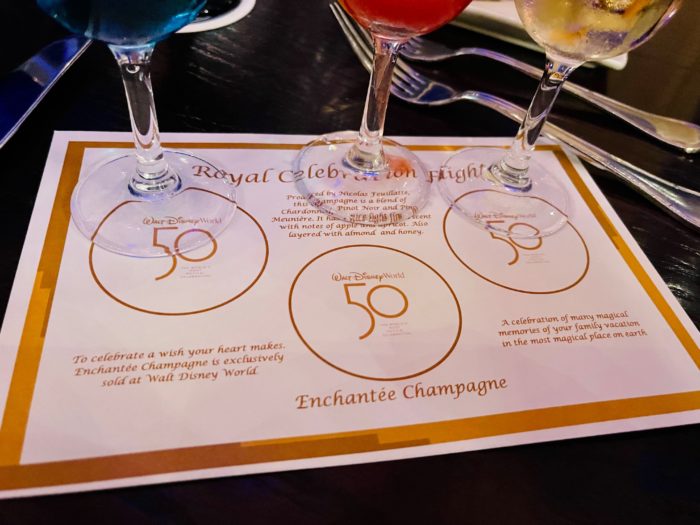 It was a fun way for grown-ups to toast a special occasion – like getting a reservation here!

Being the hostess that she is, Cinderella has made sure her guests won’t leave empty-handed but with three souvenirs: a wishing star, an autograph card, and a wand or sword. 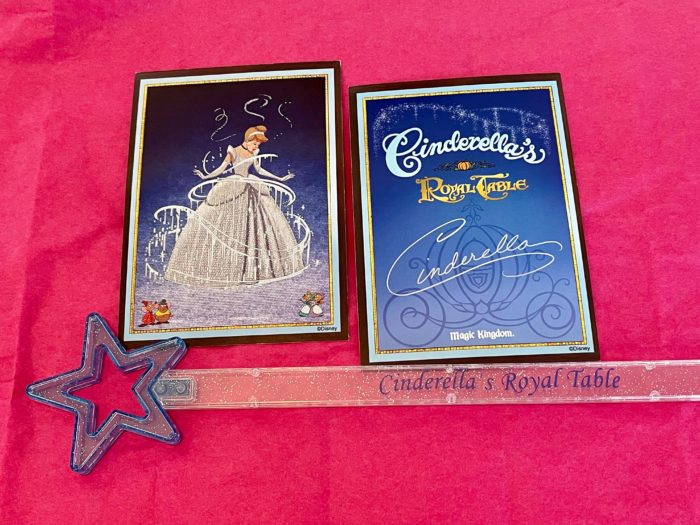 Are they small things? Yes; but they make a special setting even more exceptional.

Whether it’s the setting and views, the food, or the small, thoughtful touches, we predict you’ll love dining here. It’s pricey, but it remains one of our favorites and a truly memorable, fairytale experience.

Have you dined at Cinderella’s Royal Table? What did you think? Let us know in the comments!

9 thoughts on “Cinderella’s Royal Table Review: Why It’s Still Worth It”