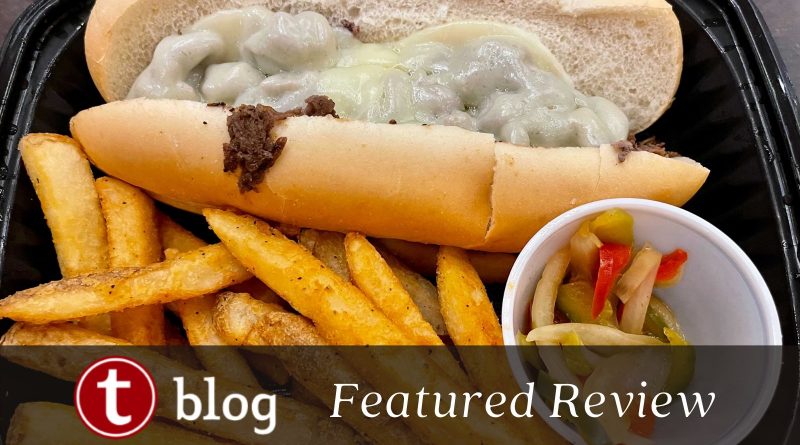 Overall, dining at Disney Resorts tends to be fairly good, even at resorts with food courts. Not all Disney Resort quick-service restaurants are created equal, however. Recently, Chrissy on our team got dinner from El Mercado de Coronado at Disney’s Coronado Springs resort. Unfortunately, she was not impressed with the quality or value of the meal, but we’ll let you decide what you think. 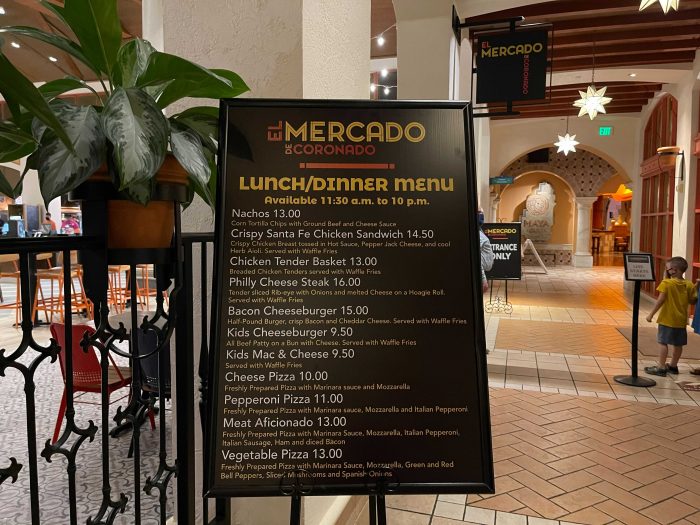 We’ll start with the kids meal, because our Junior Reviewer wanted to note an important issue. On the menu board, it was clearly stated that it was served with Waffle Fries. Here’s what was served, however. 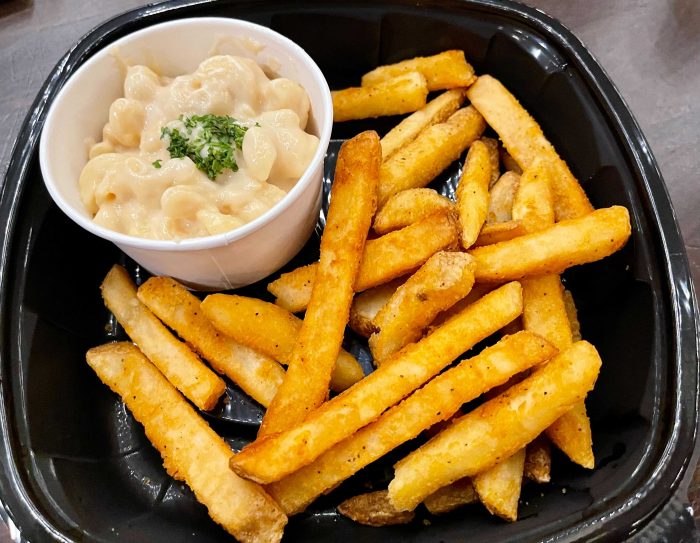 It was a bit of a disappointment for her. In her words, “These are clearly not waffle fries. Why do they say that and get you excited for waffle fries? Should we say something? Make sure you write that. They say waffle fries but there aren’t any.” Looking at the meal, I know some children would also be a bit put off by the parsley on the mac and cheese. Still, this was probably one of the better meals of the night.

Next up, the pizza. 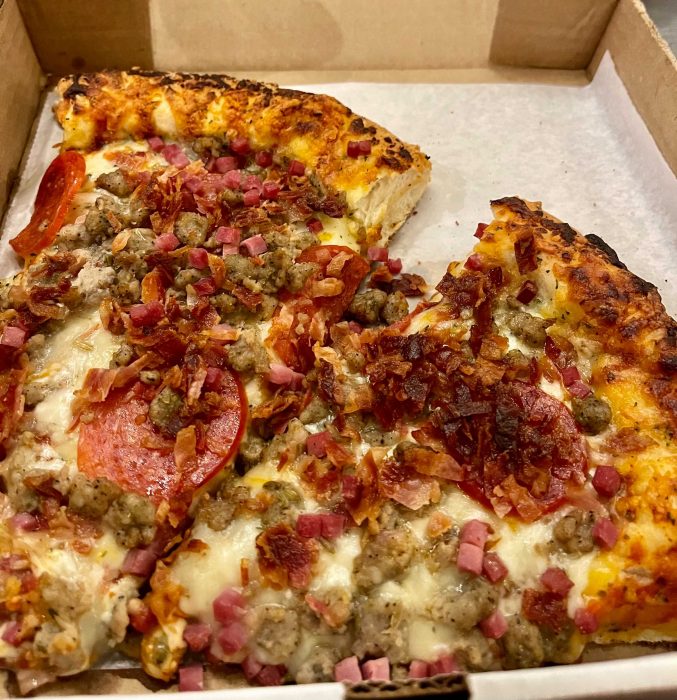 When it comes to Disney pizza, this one was actually pretty good. As you can tell, there was a ton of toppings on it — perfect for those who really enjoy some meat with their pizza. But then. . .

Next was the Philly cheesesteak. 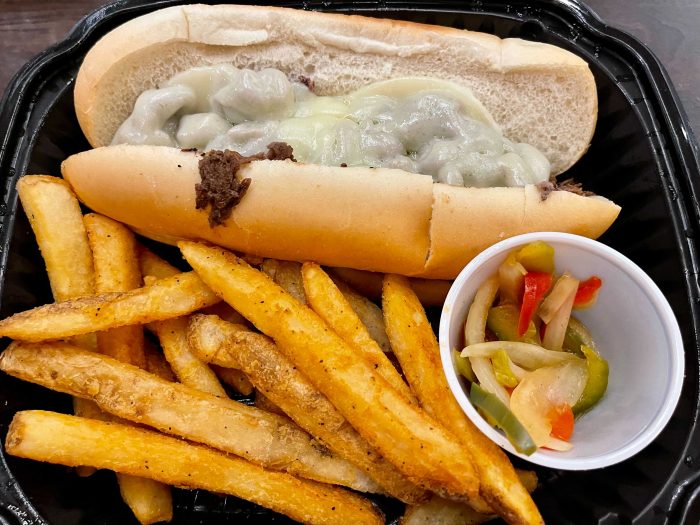 Although I appreciate the peppers and onions being served on the side for those who do not want them, overall this sandwich was just okay. At $16, it really embraced the whole “this is a hotel where conventioneers eat at” vibe.

And the one item that had us all cringing was the chef salad. What does a $12 chef salad look like at El Mercado? 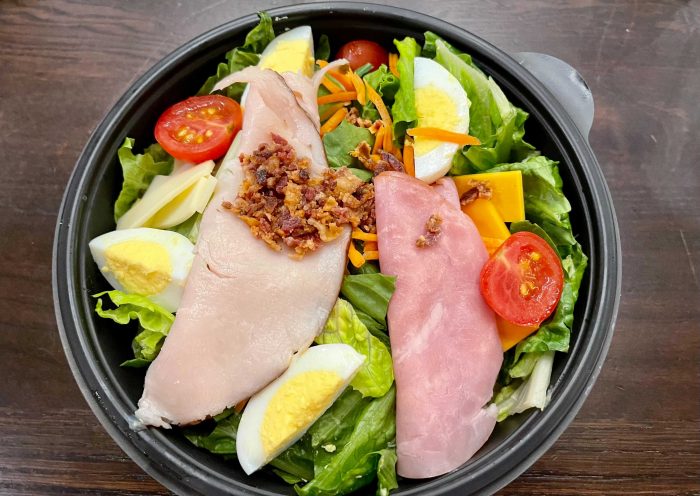 There’s so many issues with this. It’s basically one egg, two cherry tomatoes, some bacon, a few chunks of cheese, and a slice each of turkey and ham luncheon meat served on lettuce. Yes, technically that’s the kind of ingredients that come on a chef salad, but the way it was presented just made it feel thrown together. Doing a chef salad with the meat and cheese shredded instead of sliced would have made this a better dish. Would it be worth $12? Again, I’ve eaten at enough convention hotels that I wouldn’t have balked at it quite as much.

After the meal, it was time to grab some dessert. There’s a variety of desserts available, including a gelato station. Instead, our team went with a Blueberry Trifle and the Chocolate Covered Strawberry Cake. 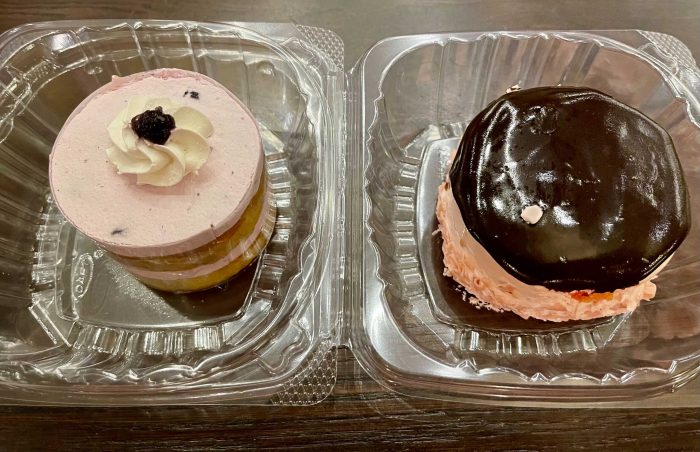 Of the two desserts, the Chocolate Covered Strawberry Cake was the more enjoyable of the two–strawberry cake with strawberry icing, strawberry shavings, and chocolate ganache. It may look like a blob, but it was a very tasty one with a great blending of chocolate and strawberry. (Although be warned it’s that “fake strawberry box cake” type of strawberry and not fresh fruit.) The other dessert, the Blueberry Cake Trifle was a huge disappointment. It looked great, but the cake was dry and tasted like those $1.00 blueberry muffin pouches. The icing was fine but not good enough to make up for the cake.

Even though it is not high on a list of dining establishments at Walt Disney World that guests are raving about, we do try out dining throughout Walt Disney World to give you our honest reviews. Our website and Lines app has ratings and rankings for every Walt Disney World restaurant. From over 500,000 surveys in the last few years, El Mercado de Coronado has an 77% thumbs up rating and is ranked #91 out of 108 similar restaurants.

Have you eaten at El Mercado? What was your experience like? Let us know in the comments.