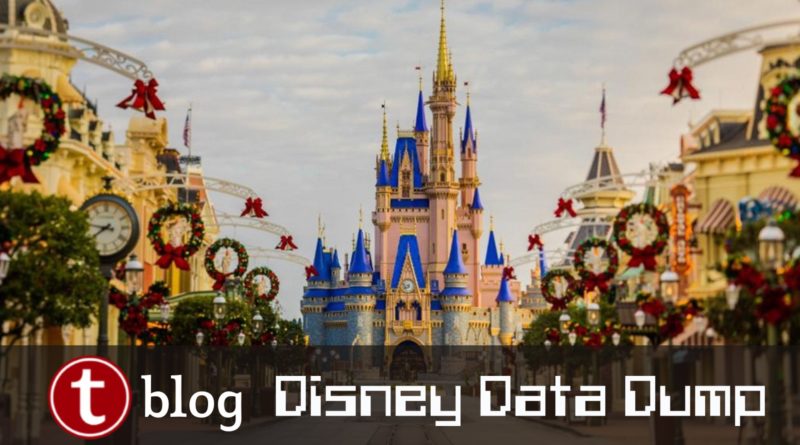 Happy November! This change of month means that it is officially holiday season at Walt Disney World. Decorations are up, the Mr. Toad dome cake has returned, holiday parties are starting back up, and food and merchandise have already shifted from Halloween to Christmas, Hanukah and more. Let’s look at how the Halloween season wrapped up, and what we can expect from this transition week if you’re planning on visiting WDW.

This is a much milder week than we’ve seen from all of October. We’re right in the heart of non-school-break season, and it shows. Last week we had one crowd-level 5 day, and that was the least crowded day of the week. This week we got three level-5 days and four level-4 days. This is great for October at WDW. And we’re hoping that it will continue until Jersey week hits us in early-ish November.

A whole bunch of parties happened at the Magic Kingdom this week. Thankfully, lower crowds overall across the resort meant that those non-party days didn’t get quite as miserable as I expected them to be. Still, the difference between a crowd level 2 (like on the 28th) and a crowd level 6 (like on the 29th) is very significant throughout the course of a day. More than enough to “make up for” the longer operating hours. Plus, a crowd level 2 at any park during October is amazing. I’m jealous of you if you were in Magic Kingdom on October 28th.

In the past week, our predictions were either spot-on or within 1 crowd level 68% of the time. If you remember this same chart from last week, it looked very different. There were no overpredictions – just underpredictions. This week got much closer to what we would consider “normal” results. 86% of the time we were within 2 crowd levels, and that means this week we earn an B for our predictions this week. Better than last week. On 4 different park days, we missed crowds by 3 or more crowd levels. The worse miss was an underprediction of 4 crowd levels at Magic Kingdom on October 26th. For some unknown reason the crowd calendar was predicting a 2, even though this was a non-party day in late October. I … don’t know why that happened, since the actual crowds were a 6. Much more in line with what this month has taught us to expect!

If we average out all of the capacity lost due to unexpected downtime over the past week, it comes out to 3.6% of attractions unexpectedly being down. This is essentially the same as last week, and is a little higher than what we saw in mid September (3.1%). The park with the biggest issues was Magic Kingdom (4.7% of capacity lost), and that breaks a two-week streak of Hollywood Studios being the most unreliable park.

The single worst day for attraction downtime in the past week was October 30th. On that day, 8% of all capacity at WDW was lost due to unexpected downtime. Boo and ouch. The single worst park-day of the week was also on the 30th. On that day, 14% of the the capacity at Magic Kingdom was lost due to unexpected downtime. That’s certainly not a great number. Magic Kingdom had a 10-hour operating day on the 30th since it was a party day, so it’s equivalent to the entire park opening almost an hour and a half late, or closing almost an hour and a half early. Thankfully, it didn’t have much of an impact on wait times overall. The crowd level was still just a 3.

Rise and Frozen being down during the first hour of the day means that you absolutely need backup plans for those parks, because they’re both generally great rope-drop options. Magic Kingdom, thankfully, has plenty of other rope drop options (looking at you, Fantasyland). And I guess Mickey and Minnie like sleeping in occasionally, so don’t plan on dropping by on them at Animal Kingdom first thing in the morning.

Thanks to those lower-crowd party days, Magic Kingdom continues to have the lowest average wait times. EPCOT came close this week, though, at an average of 24.5 minutes. Pretty reasonable for a park with many fewer attractions to absorb all of the crowds.

From October 25th through 31st, actual wait times in the Lines App averaged 63% of what was posted. So if the posted wait time was 20 minutes, you could’ve expected to wait just under 13 minutes instead.

But the worst offender for the week was Tower of Terror. At this one attraction, submitted actual wait times were 45% of posted wait times. That means if Tower of Terror had a 30 minute posted wait, you probably would’ve waited just over 13 minutes. Under half of what was posted. Remember to always check the Lines app for predicted actual waits instead of believing what is posted.

Looking Ahead: November 1st through 14th

Since it takes time to pull data and write a post, you’ll be reading this on the 2ndth when the 1st is already in the past. But we’re staying as close to real-time as possible.

Our predictions have corrected themselves to be more realistic instead of regularly underpredicting. This is good news as we head into November. My family will be on a lovely Disney Cruise next week, so that means no Disney Data Dump on November 9th. I apologize! I’ll virtually wave at you all from Cabo instead. That means I need to help you look ahead over the next two weeks.

The 1st through the 5th or 6th should continue to see the moderate crowds from this past week. Then, Jersey week hits. Veterans Day and the time off that it offers to families leads to much more travel. Expect crowds to pick back up a bit at least from the 7th through the 12th or 13th. November and December are generally feast-or-famine when it comes to crowds, so we should be seeing some bigger swings in crowds surrounding holidays.