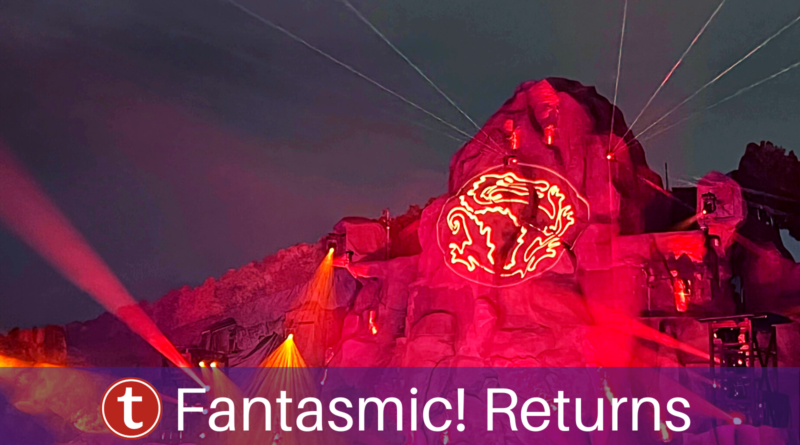 Disney World’s nighttime spectacular Fantasmic! returns to Disney’s Hollywood Studios tonight, after more than two and a half years since its last performance.  Our own Christina Harrison was at Wednesday’s Cast Member preview show, and sent in these comments and photos.

The New Fantasmic! Show in Pictures!

Moana’s song is I Am Moana.

Here’s the order of the princesses in the flotilla: Beast & Belle; Ariel & Eric; then Snow White & Prince Charming.

The last scene we were able to see was the Wicked Queen before and after the transition to the Old Crone.

Is Fantasmic a Good Show?

Most of our readers think Fantasmic! is great. Here’s how they rate it:

When is Fantasmic Performed in Walt Disney World?

Fantasmic’s typical schedule includes one performance nightly, usually scheduled at park closing time.  So if Disney’s Hollywood Studios closes at 9 p.m., Fantasmic! will be scheduled to start at 9 p.m., too.

How Do I Get Good Seats for Fantasmic?

The best seats are reserved for those who buy the Fantasmic dining packages (see below).  While it’s hard to imagine a 10,000-person stadium running out of space, that’s exactly what happens almost every time the show is staged. On evenings when there are two shows, the second will always be less crowded.

If you attend the first (or only) scheduled performance, then arrive at least an hour in advance to get good seats for Fantasmic; if you opt for the second, arrive 50 minutes early.

Note that if you sit close to the stage, you’ll get damp, if not wet, from the water effects.

How Long Does Fantasmic Last?

How Does Disney’s Disability Access Service Work for Fantasmic?

Disney hasn’t yet said if DAS will be offered for Fantasmic.

If you know you want to see Fantasmic! and you’re going to have a sit-down meal at Disney’s Hollywood Studios, then a Fantasmic dining package might be the best way to do both.  The package includes one meal at a participating restaurant, and a voucher good for admission to the reserved seating section of that night’s show.  The table below lists the Hollywood Studios restaurants that offer Fantasmic! dining packages.

Your meal will include the following:

Is the Fantasmic Dining Package Worth It?

We’d only recommend the Fantasmic dining package at the Hollywood Brown Derby, for its food quality and atmosphere.  If you’re looking for the lowest cost and decent value, your choices are 50’s Prime Time Cafe or, in a pinch, breakfast at Hollywood & Vine.

You’ll receive your vouchers at the restaurant during your meal; then, about half an hour before the show, you’ll report to the Highlands Gate on Sunset Boulevard, between Theater of the Stars and the Once Upon a Time store. A cast member will collect your vouchers and escort you to the reserved-seating section of the amphitheater. Though you’re required to arrive early, you can be seated immediately. The reserved seats are in the center of the stadium; you won’t have assigned seats—it’s first-come, first-served—so arrive early for the best choice. Finally, if Fantasmic! is canceled due to weather or other circumstances, you’ll get a voucher for another performance within five days.

Hollywood & Vine is the only dining package location that has character dining.  Breakfast is the Disney Junior characters, while lunch during the holidays is holiday-themed Minnie and friends (from November 8).

How Do I Get Out of the Park After Fantasmic?

Fantasmic’s seating is divided into sections named after Disney characters.  These Fantasmic seats are closest to the exits:

These sections are the farthest awat from the exit:

In these sections, the seats farthest from the stage (that is, the seats highest up in the theater) are closest to the exits.  So if getting out of Fantamic fast, so you don’t have to wait for a bus or Skyliner, is important to you, then sit close to the top row of Sebastian, Scar, or Ursula.

One thought on “Fantasmic! Returns to Disney’s Hollywood Studios with New Scenes!”