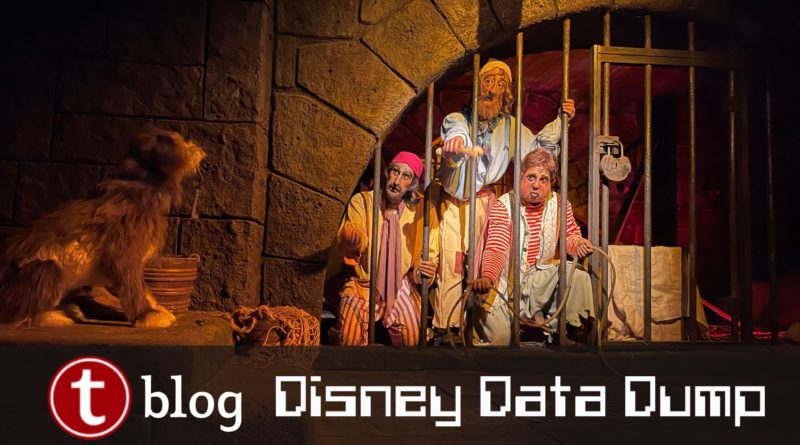 I don’t know about you all, but I’m so grateful that Thanksgiving week has passed. If you braved the parks in the lead-up to turkey day, I commend your bravery. If you waited for the weekend after Thanksgiving and got to walk off your holiday meal in the less-crowded parks, I’m totally jealous. We saw our first-ever crowd level 10 on the last day of last week’s review, so did the rest of the week continue to be that crazy? Or did things calm down a little bit as people focused on food in addition to attractions? Let’s find out!

Fun Becky fact: Growing up, we would visit Walt Disney World about once every three years. And we almost always visited over Thanksgiving. In the 90s and early 00s, it was really a rather uncrowded week. My, how times have changed.

I’m not going to lie – I’m actually quite pleasantly surprised by these results. After seeing a crowd level 10 for WDW overall on November 21st, things actually calmed back down. To be sure, a crowd level 8 still isn’t an easy day to tour the parks, but it could have been much worse. Thankfully, we’re also seeing those holiday crowds depart and things come back down to a moderate level on Sunday and Monday. This points to the next couple of weeks being a nice sweet spot with holiday decorations and activities but without the crazy that comes with Thanksgiving and Christmas/New Years.

Disney knew that Thanksgiving week would be crowded, and that adding more parties into that mix would lead to some really ugly crowds at Magic Kingdom on non-party days. So we have a bit of a break from the constant party-related early closures. Still, the difference between party and non-party days is still very obvious. It makes at least a 3- or 4-crowd level difference. Magic Kingdom on the 22nd and 27th was lovely. Magic Kingdom on any other day this past week was much more difficult to tour.

In the past week, our predictions were either spot-on or within 1 crowd level 75% of the time. This is an all-time high! This Thanksgiving, we’re thankful for predictably high Thanksgiving crowds. 86% of the time we were within 2 crowd levels, and that means we earn an B for our predictions these past two weeks. Exactly the same as the last week. We got a little skewed toward over-predicting crowds over the past week. This fits with crowds and wait times being slightly more moderate than the usual Thanksgiving awfulness. Our biggest miss was a party day where we were somehow predicting a crowd level 8 at Magic Kingdom that actually ended up being a 4. Party days aren’t crowded, even during Thanksgiving week.

If we average out all of the capacity lost due to unexpected downtime over the past two weeks, it comes out to 4% of attractions unexpectedly being down. This is thankfully down from our all-time high last week, but still up above our sort of historical average since we started this series. The park with the biggest issues was Magic Kingdom, with 5.4% of capacity its lost due to unexpected downtime. About half as bad as Hollywood Studios was last week, but that’s still a lot of lost capacity at the most popular park, and one that already closes early regularly during this time of year.

The single worst day for attraction downtime in the past week was November 27th. On that day, 7% of all capacity at WDW was lost due to unexpected downtime. The single worst park-day of the week was also on November 27th, at Magic Kingdom. On that day, 14% of the the capacity at that park was lost due to unexpected downtime. Magic Kingdom was open for 10 hours on that day since it was a party day, so 14% downtime is the equivalent of the whole park being down for almost 1.5 hours out of those 10 hours. On an already-short operating day, that makes a huge difference. It’s very likely that the crowd level would have been even lower than the crowd level 4 that we saw.

The worst offender was Pirates of the Caribbean, which was unexpectedly down for approximately 31% of the week. What a bummer for this classic attraction to be down for a third of the week! Pirates was down for 95% of the day on November 27th – but it also had problems early in the morning on several other days. The attraction doesn’t like waking up in the morning. Coming in 2nd place for unreliability this week was Frozen Ever After, which was offline for 16% of the week.

Once again, the “left side” of Magic Kingdom has a really disappointing start to its day. This should be prime rope-drop territory for folks that don’t have access to early entry, since it doesn’t open with the rest of the park. Instead, it just … stays down when it shouldn’t. And we’ve seen this theme for several weeks now, which means it’s something to plan around during your Magic Kingdom mornings. All of the other parks have more fluidity in their morning problem-makers. Frozen Ever After is the biggest remaining issue on this week’s list. It’s one of the three attractions that you should absolutely hit first thing in the day, and so it being down a third of the time is hard to plan around.

Tower of Terror continues to have crazy wait times, making a big case for it to be pushed a little higher on our Genie+ priority list for that park. Flight of Passage saw a large increase in its wait times as well, not in line with what was happening at other parks (or other attractions at Animal Kingdom). EPCOT stayed more steady. Magic Kingdom had fewer party days, so its star attraction also saw a bigger increase in wait times. This isn’t necessarily due to just more crowds, but due to fewer party days dragging wait times down.

From November 22nd through 28th, actual wait times in the Lines App averaged 66% of what was posted. So if the posted wait time was 20 minutes, you could’ve expected to wait just over 13 minutes instead.

But the worst offender for the week was Pirates of the Caribbean. Not a great look since it was also down so frequently. At this one attraction, submitted actual wait times were 48% of posted wait times. That means if Pirates of the Caribbean had a 30 minute posted wait, you probably would’ve waited just over 14 minutes. Less than half of what was posted. Remember to always check the Lines app for predicted actual waits instead of believing what is posted.

Since it takes time to pull data and write a post, you’ll be reading this on the 30th when the 29th is already in the past. But we’re staying as close to real-time as possible.

We’ve made it through a harrowing week and show have some room to breathe before we head into late December.

Throughout the next week, expect to see crowd levels in the 4-to-6 ranges at most parks on most days. The obvious exception here is at Magic Kingdom, where there are Christmas parties on the 29th, 1st, 2nd and 4th. That means higher crowds on the 30th, 3rd and 5th. And some really pleasant days (barring any downtime) pre-party. Festival of the Holidays, and its requisite food booths, will draw more people to EPCOT during the weekend. But they should be eating and enjoying Candlelight Processional rather than bogging down wait times too much. If you’re headed to Walt Disney World (like some of my favorite people are) – you’ve made a smart decision!