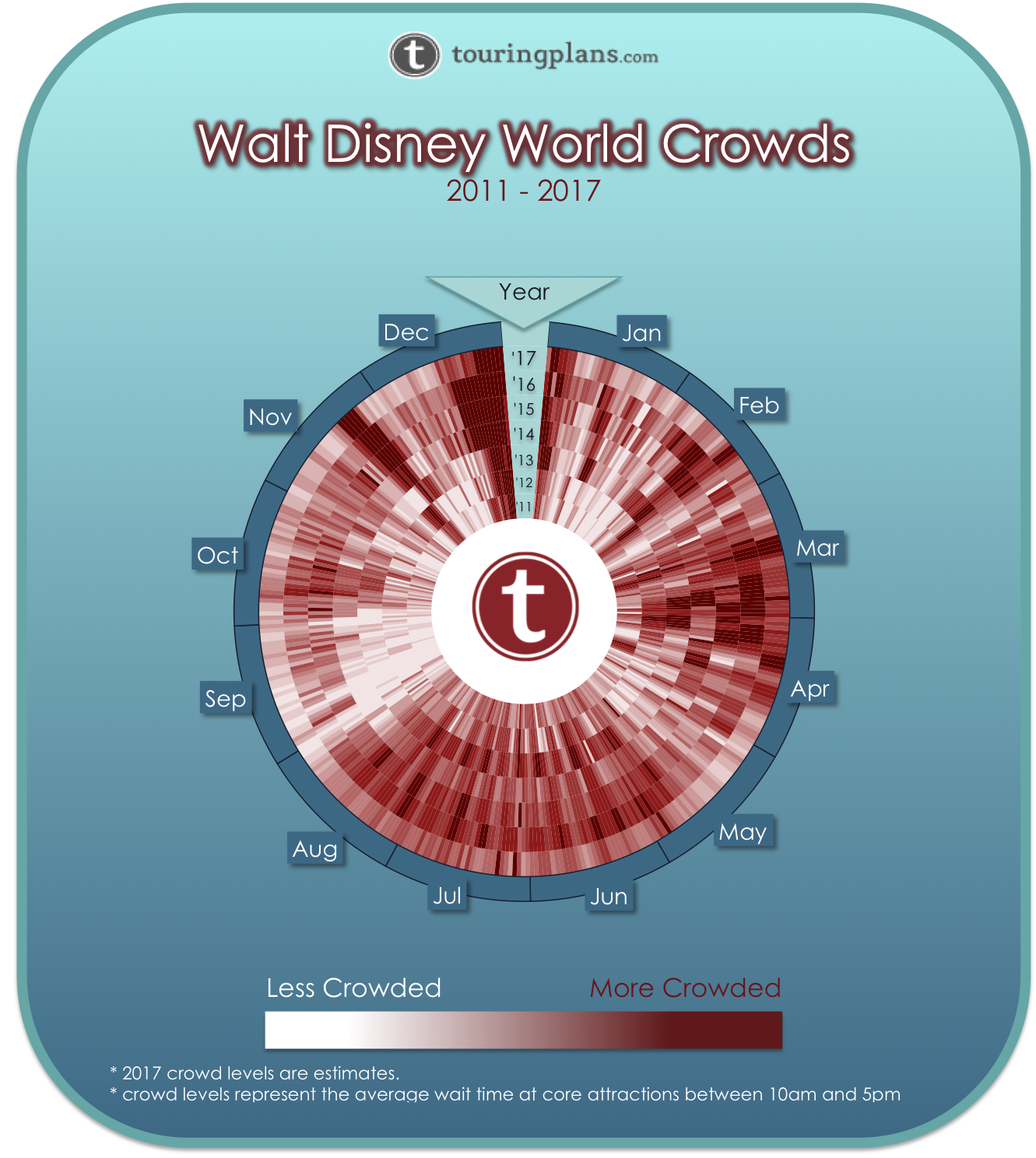 Another New Year is arriving and while the champagne is chilling let’s take our annual look at the crowds in 2016 and what to expect in 2017. Here is last year’s post. 2016 was a year with highly variable crowds at Animal Kingdom and Hollywood Studios while Magic Kingdom and Epcot remained predictable. Hollywood Studios and Animal Kingdom saw the most significant changes take place in 2016. The Studios saw many of its attractions affected by the construction of Star Wars Land and Toy Story Land while its most popular attraction, Toy Story Midway Mania increased its capacity per hour by 50%. Animal Kingdom saw major construction as well for Pandora and the park saw closing hours after sunset for the first time in the parks history.

In 2016, for only the second time since 2005, Christmas fell on a Sunday. This led us to suggest that Christmas crowds in 2016 might be the lowest in recent memory since school boards spread their scheduled holidays over more weeks than usual. That seems to be coming true as we have yet to see any park reach capacity during this year’s holiday rush. It is very likely that Magic Kingdom will end that streak on New Year’s Eve but in most years we see many park closings due to capacity before December 31st.

Thanksgiving crowds in 2016 were similar to what we see most years and the rest of the fall continued the pattern of larger crowds than what we have seen before 2015. Summer was busy but had pockets of lower than usual crowds. May ended up being a good time to visit, partially due to the lack of Star Wars Weekends at Disney Hollywood Studios. The period between mid-March and Easter week saw some of the largest crowds we have ever seen during that period. Presidents Week was busy as usual and January was similar to what we saw in 2015.

Dynamic pricing for Single Day Disney World tickets had a profound effect on crowd patterns at the parks in 2016. Peak days were still peak days but many days priced as “Regular” saw lower than expected crowds, especially when adjacent to “Value” days. Planning out the best day for your visit in 2017 might require a close look at the ticket price calendar.

Lets take a month to month look at what Disney World guests can expect crowds to be like in 2017. To see what the crowd will be like on the day of your visit, check the Disney World Crowd Calendar

New Year’s Day is our perennial favourite day to visit the parks during the peak holiday season, especially if you have a young family or don’t plan to make it until midnight on New Years Eve. The parks are open early but most guests are still recovering from the night before. The Walt Disney World Marathon brings thousands of visitors to the resort, this year between January 5 and January 8. Martin Luther King Jr Day falls on January 16. Watch out for the new Festival of the Arts on weekends at Epcot, it might bring in more guests than expected. The NFL’s Pro Bowl is another wild card in 2017. Held for the first time in Orlando we don’t expect to see a huge bump in wait times but anything is possible with a first time event.

January is also closure season at Disney World and there are a few scheduled in 2017. Most notably are the Walt Disney World Railroad closure and Magic Kingdom’s Hall of Presidents as that attraction prepares for the addition of the new President-Elect. You can see a list of all closures here.

Super Bowl Sunday falls on February 5 and will likely have no effect on the parks. Presidents Day is February 20 and we expect the usual rush of guests. Mardi Gras falls 8 days later on the last day of the month so there may be a small compounding effect with New Orleans guests flooding the parks between the two holidays.

The first day of March brings the 2017 edition of Epcot’s Flower and Garden Festival. The Spring Break rush in 2017 looks like it will not hit parks until late in the month which makes early to mid March some of the best days to visit in 2017. The first 24 days of the month are marked “Value” or “Regular”.

Disney World Guests should expect busy crowds throughout most of April. By the 24th of the month we should see Easter and Spring break crowd start to fade. Easter falls on April 16 in 2017.

The month of May on the Disney World Crowd Calendar is notably light on special events and holidays until we get to the inevitable rush for Memorial Day on May 29. If you are looking for a spring vacation without huge crowds, go in May.

Note that once we get into June and later, the Disney World Crowd Calendar is much more susceptible to change. Animal Kingdom especially remains a wild card during the summer as we wait for official announcements about the new Pandora attractions. Disney has labelled most of the month as “Peak” pricing for single day tickets but current park conditions suggest that crowds will be busy but below the top level of our scale.

Independence Day falls on a Tuesday this year. Crowds in July are expected to be similar to what we have seen in 2015 and 2016 which is busy but slightly less so than the busiest times of the year. If you want to plan a summer trip but don’t like crowds, wait until as late in August as possible, if you can.

By August 28 many schools will be back in session but even before then, moderate crowds are likely at the four parks. We love August for summer trips since park hours are still extended but crowds have lightened a bit from what we see in June and July. Epcot’s Food & Wine Festival is scheduled to begin on the last day in August.

Labor Day falls on September 4th this year. As always, September is the single best time of the year to visit Disney World without large crowds, we expect that to continue in 2017. Early September is usually better than late September but both are better than any other time of year.

Columbus Day is October 9th in 2017, guests should avoid that weekend if possible. Halloween falls on a Tuesday which means crowds should be manageable. A lot of October’s crowd flows will depend on a final schedule for Mickey’s Not-So-Scary Halloween Parties which is usually released in Spring.

The New Jersey Education Association Convention will likely take place November 9-10, 2017 which means that crowds will be busy between November 6 and 13. Thanksgiving is two weeks later, on November 23. As always, watch out for Epcot’s Food & Wine Festival on the weekends. Even though wait times don’t spike the festival brings in hordes of people, especially to World Showcase.

Christmas falls on a Monday in 2017 and like 2016 that means school boards will have to decide whether to end the fall session on December 23rd or to end earlier. This causes the holiday break to be split more evenly across a four week period rather than the usual three weeks, making holiday touring very busy but less extreme than most years.