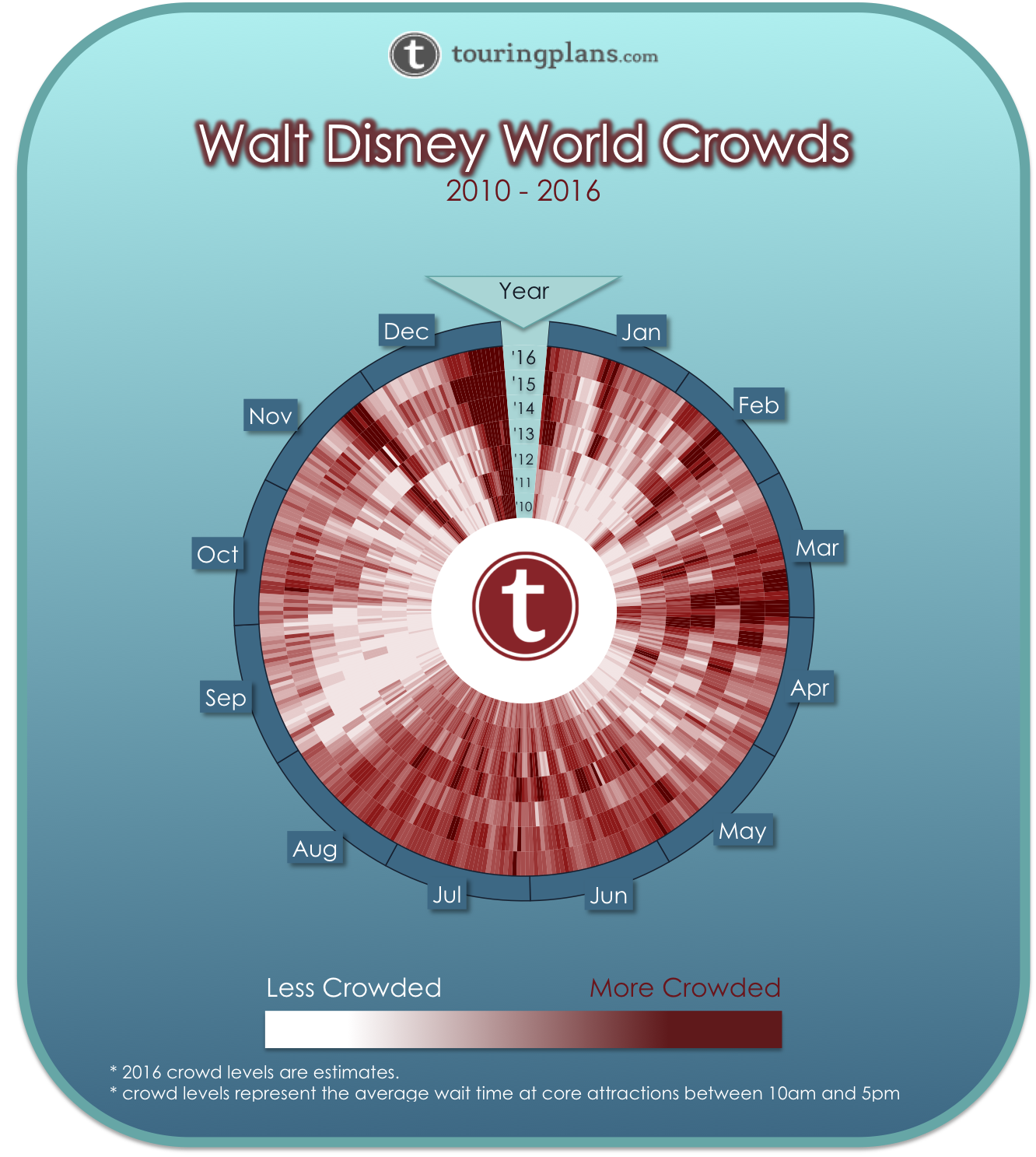 The New Year has arrived and so it is time to take a look back at Disney World crowds in 2015 and what might be in store for Disney World guests in 2016. Last year we did a similar review for 2014 and 2015 including this graphic for which we still don’t have a good name. Wheel of Crowds? Spiro-graph? The Blotchy Donut? Here it is updated with what we actually observed in 2015 and what the Disney World Crowd Calendar predicts for 2016.

One thing that stands out is the brightness of fall 2015 compared to what we saw in previous years. In 2010 to 2014 most of the days in September and October are white or light red but in 2015 the colors are much darker. In fact, it is not hard to see the overall trend of light to dark when you expand out from the centre. The lower crowd levels ( ‘1’s, ‘2’s and ‘3’s) on the Crowd Calendar that we saw in years past just don’t seem as frequent in the present. Disney World is becoming more and more crowded every year.

As you scroll around the circle for 2015 and 2016 the opportunities for low crowds are few and far between. We can see light patches historically in January, late April, early May, September and early December. But in 2015 and 2016 your choices are early September or early December, that’s it.

Let’s take a closer look at 2016, month by month. To see what the crowd will be like on the day of your visit, check the Disney World Crowd Calendar.

The Walt Disney World Marathon (January 6-10, 2016) brings in tens of thousands of runners in early January but by January 11 crowds will be minimal for about a week. This might end up being one of the least crowded weeks of 2016. The long weekend for Martin Luther King Jr. Day is the only major bump in crowds in January, this year it falls on January 18. January is also refurbishment season so note that many attractions close for annual upkeep. Soarin’ closes on January 4 for a lengthy rehaul. See all closures here.

Easter Sunday is March 27 in 2016 so expect March to be very busy. Many school boards have planned spring break adjacent to the Easter holiday. As in most years crowds build from moderate levels in the early part of the month to extreme highs by the end of the month.

With Easter out of the way, April 2016 may be a decent month to visit Disney World in 2016. Some school districts will have a week off in early April but the rest of the month should be moderate to busy. Watch out for a bump in attendance during Star Wars Half Marathon Weekend April 14-17. Big Thunder Mountain Railroad goes dark for a lengthy refurbishment starting on April 4.

Other than the continuation of Epcot’s Flower and Garden Festival the event calendar in May 2016 is noticeably sparse without Star Wars Weekends at Disney Hollywood Studios. This could make May even more desirable than in years past. Memorial Day weekend will be extremely busy as usual. Animal Kingdom’s new nighttime entertainment might be in full swing by May so that may counteract the lack of Star Wars Weekends and keep the resort wide crowds about the same.

June will be a lot like May in terms of crowds. Expect the parks to be busy, hot and humid. Many school districts begin to end their 2016 season in June which means a lot of grad trips to the resort.

As much as crowds in fall 2015 surprised us, summer 2015 did not. July crowds have been comparable every year since 2006. The parks will be hot with a significant chance of thundershowers every afternoon. Park hours are extended however, ready for savvy guests to exploit. The only extreme crowds in July will be around July 4 which occurs on a Monday this year.

If you must travel to Disney World in summer, we believe that August will be your best bet in 2016 once again. The later in the month you can push your trip, the better. August has no special events.

In 2016 Labor Day falls on September 5. As much as September 2015 crowds were surprisingly high, September remains the single best time of the year to visit Disney World if your only objective is to avoid crowds. It may not be the empty oasis that it was in years past but early September is still a great choice. If your kids don’t return to school until after Labor Day consider a trip between August 28 and September 4. It might be the best seven day period all year for low crowds. Disney World is always a crowded place, however, September is simply more manageable.

Columbus Day is Monday, October 10 and the weekend surrounding it will be busy. Other than that, October is another good choice for visiting the parks but our Crowd Calendar predictions for October 2016 are noticeably higher than in years past, obviously a reaction to what we saw in 2015. Note that projected crowd levels for 2016 depend greatly on park hours and Halloween party schedules that have not yet been announced. Once the schedule is set, the crowd projections may change.

Epcot’s Food & Wine Festival, the Wine & Dine Half Marathon, Mickey’s Very Merry Christmas parties, Veterans Day and Thanksgiving make November a difficult month to summarize. Crowds vary widely day-to-day depending on the event schedules. Thanksgiving falls on November 24 in 2016 and Veterans Day falls on a Friday which may increase crowds during that weekend.

As busy as fall 2015 was relative to years past, December 2015 was more typical although still busier than expected. Even with the busier parks early December remains one of our favorite times of year to visit Disney World. The parks are festive, temperatures are pleasant and crowds are busy but manageable. Christmas Day falls on a Sunday in 2016 so our projections for crowds will depend greatly on when school districts decide to break for the holiday. If schools choose to end on December 23 then the holiday rush will be pushed a little later into January.