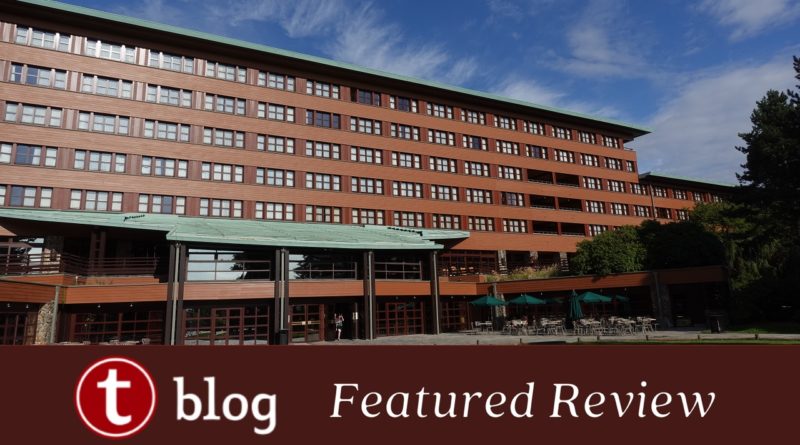 Disney Sequoia Lodge is a hotel that is part of Disneyland Paris Resort located in Chessy, France. The sprawling complex is home to 1011 guest rooms in six separate buildings. Sequoia Lodge features a theme inspired by 20th century American National Park lodges and is surrounded by beautiful pine and sequoia trees. In this post we’ll review a standard room and go over some of the hotel’s features and amenities.

Don’t forget, our TouringPlans travel agents are ready and waiting to help you book your trip to Disneyland Paris, or anywhere else you may want to go in France and beyond. Click the link to get a quote. 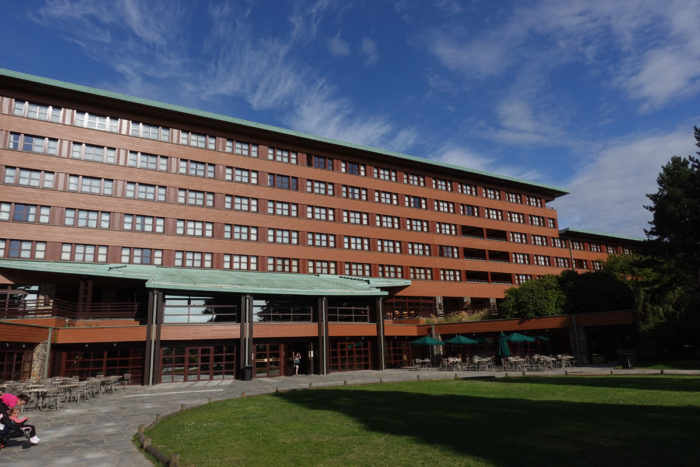 Here’s a look at the exterior of Disney Sequoia Lodge facing west on the map. This is the side of the hotel that you’ll see if you are walking back from Disneyland Paris or Walt Disney Studios theme parks. 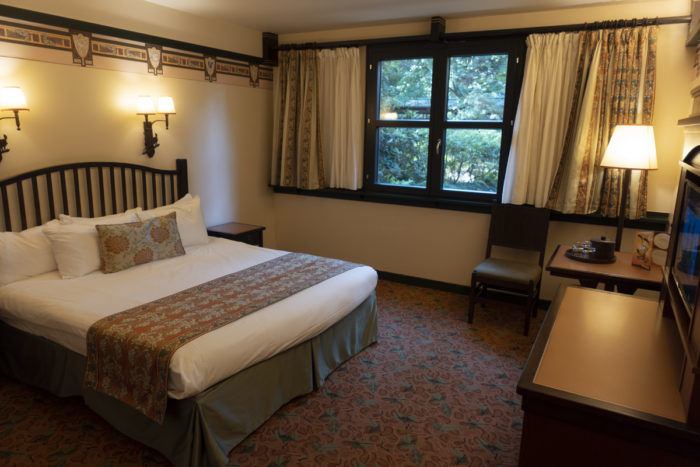 This is a standard king bedroom at Disney Sequoia Lodge. I didn’t bring a measuring tape but the room is large enough to comfortably fit two adults, as well as two open carry-on suitcases and a couple of backpacks. There is no luggage rack, but there is a shelf in the closest area that can fit one open suitcase. 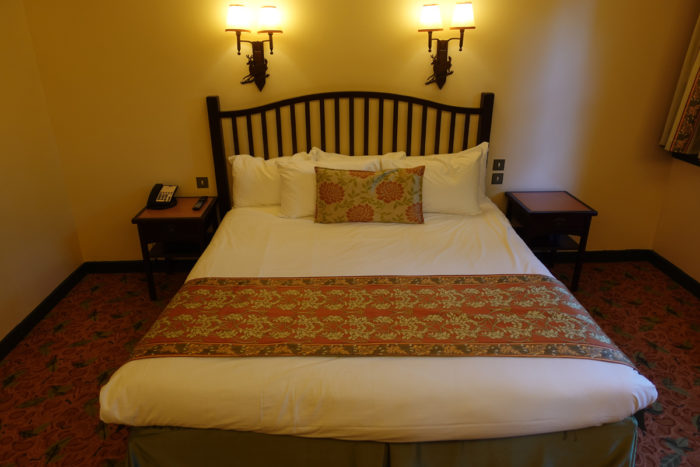 The king size bed is on the firm side. My girlfriend and I found it to be comfortable, but it will definitely not be the preference of some people. For what it’s worth, all of the hotels we stayed in during our trip to Paris had beds that were a bit firm. 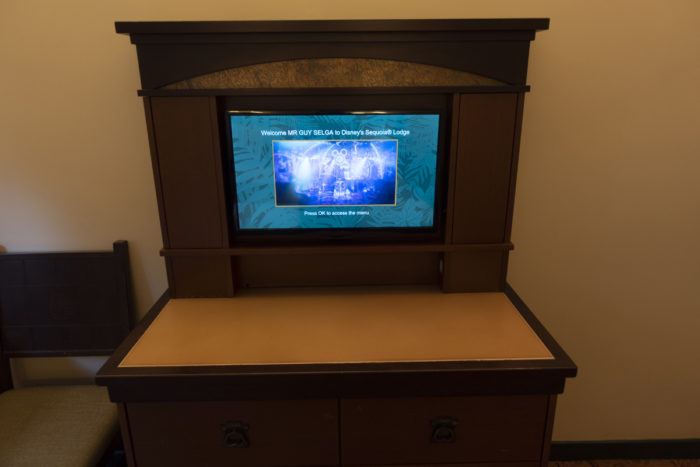 The dresser and TV area. On the right side under the TV you may notice the room’s single outlet. Yes that’s right, the room only has one single outlet to charge your phone or any other devices you may need to charge. There are no outlets next to the bed. Also remember that this hotel is located in France, so if you’re visiting from USA you’ll need a outlet adapter. I bought this pack of three on Amazon for $13 and they worked perfectly. Anyway, the TV has a large selection of channels from around the world, including many news stations in a variety of languages. 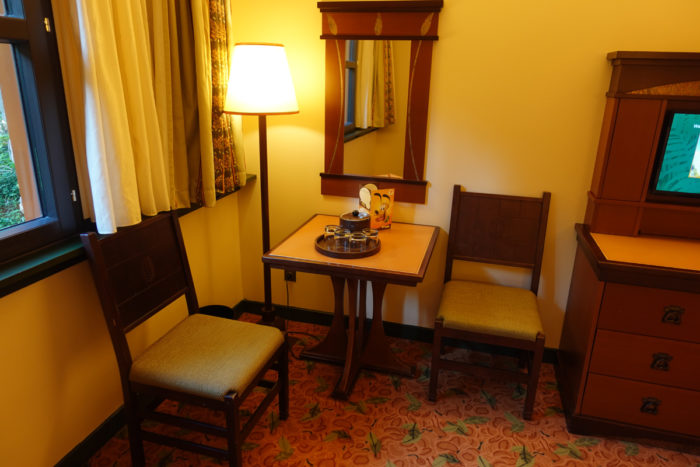 A small table with two chairs and a lamp sits in the corner next to the TV and dresser. You may be able to see an electrical outlet under the table. You can unplug the lamp and use this to charge any devices, but keep in mind this outlet only works when the room’s lights are turned on. That means this outlet is useless at night when you’re trying to sleep. 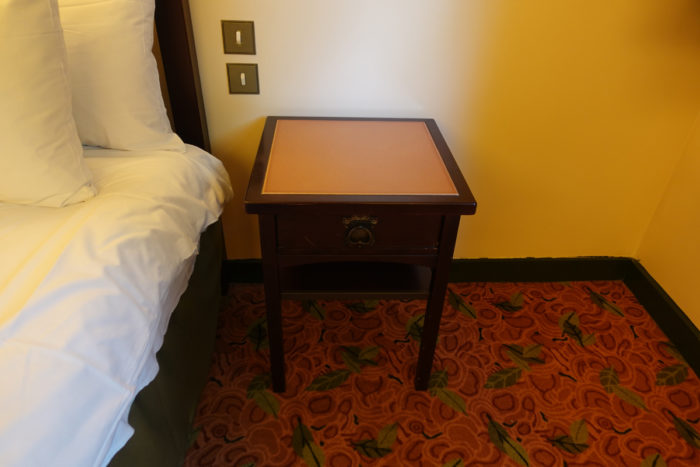 A nightstand on the right side of the bed along with light switches. 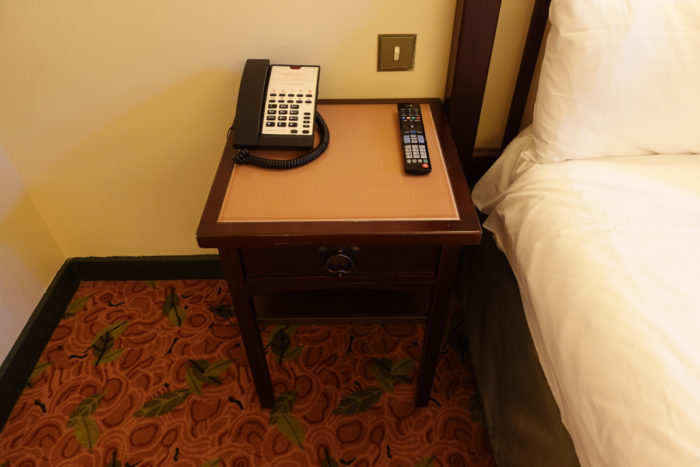 The other side of the bed has this nightstand with the room’s phone. 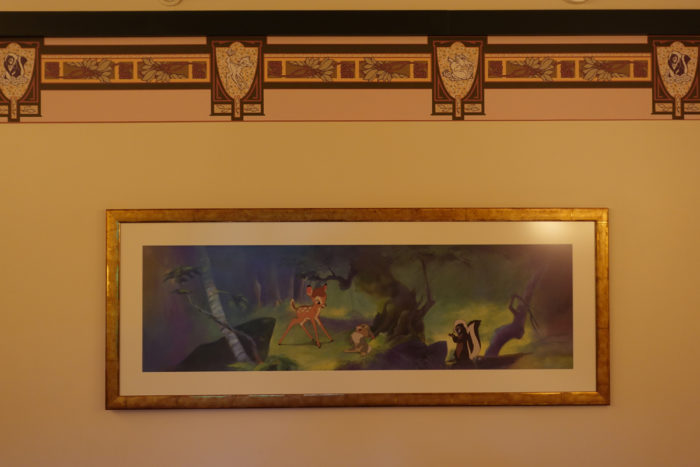 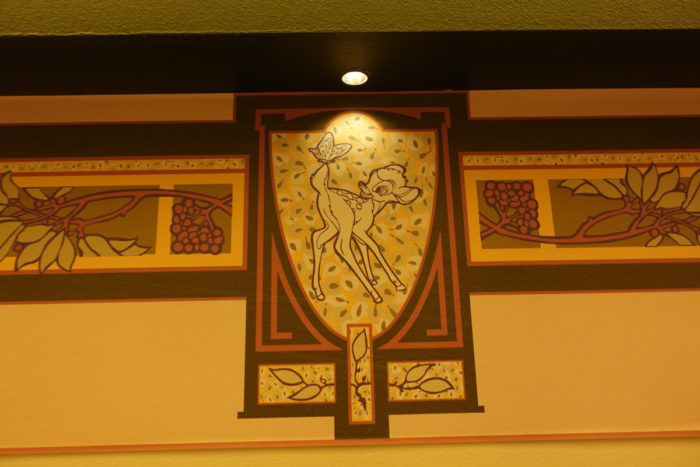 Characters from Bambi adorn the trim near the ceiling. 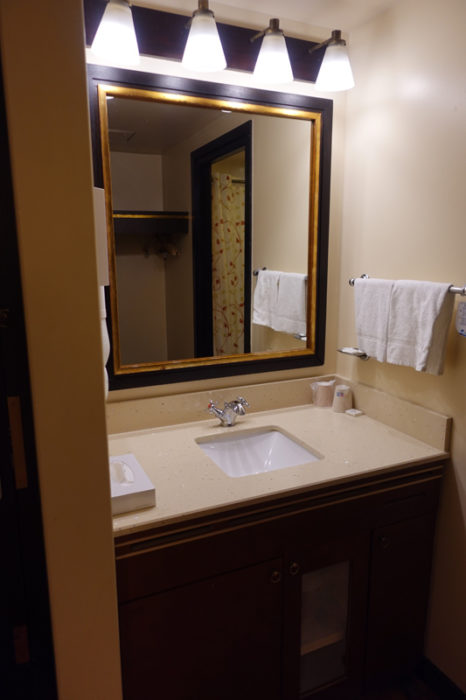 Moving on to the bathroom and sink area. As you can see it’s extremely basic. You get a couple of cups, a tissue box, and a very small bar of hand soap. Thankfully there is a decent amount of counter space. There is a hair dryer built in to the wall, which my girlfriend said was comically bad and outdated. 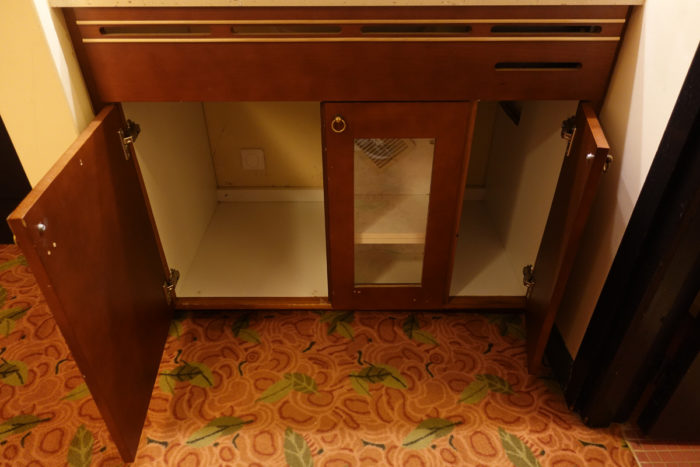 More storage space under the sink. It looks like there could have been a fridge there at one point, but who knows. 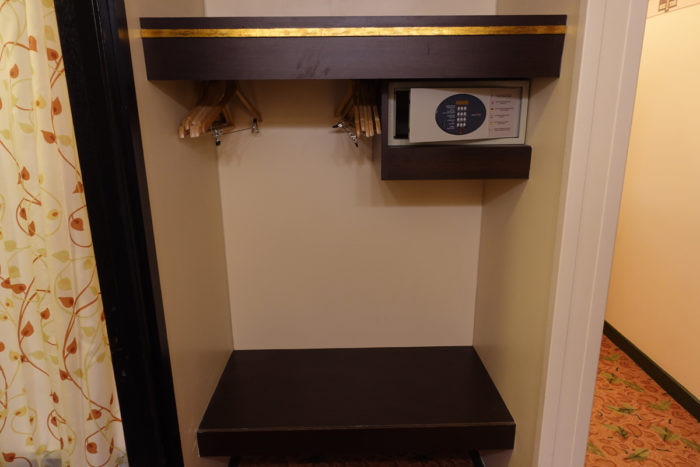 Across from the sink there the aforementioned shelf for luggage, a safe, and some hangers. 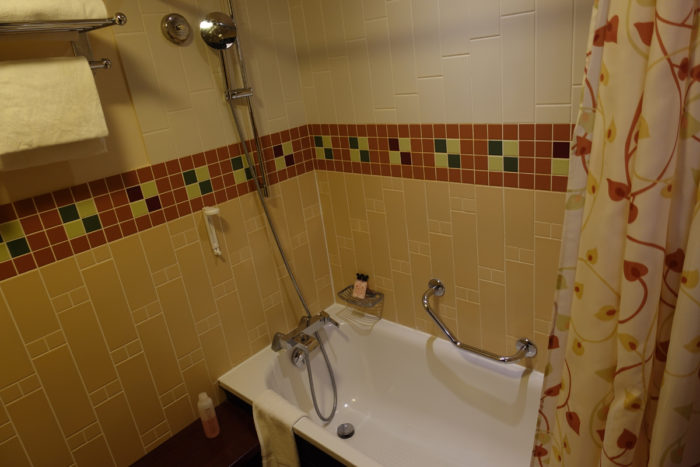 A door separates the sink/washbasin and closet area. The shower had good water pressure and the temperature quickly warmed up to an acceptable level, which is always a plus. I personally had no problem with the size of the tub, but some people may find it too small. 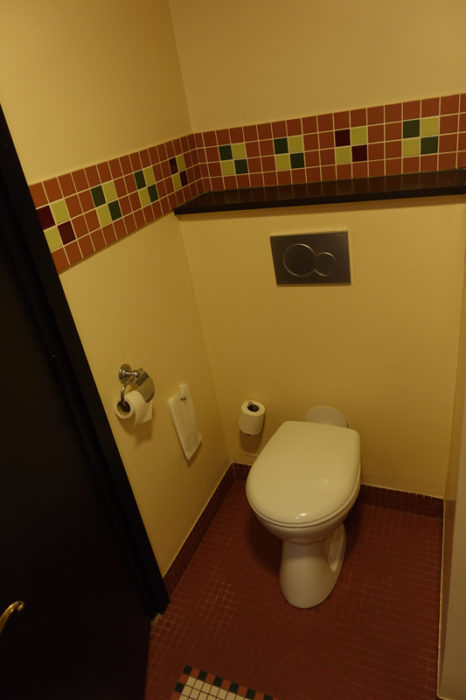 Here is a picture of a toilet. I have one of the only jobs in the world where it is acceptable to post pictures of toilets that are not my own. 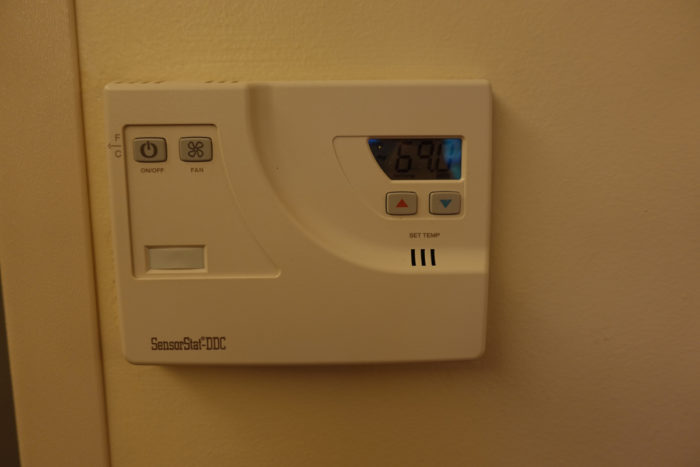 At some point I read somewhere that only 20% of the hotels in Paris have air conditioning. Disney Sequoia Lodge is one of them. We visited during a heatwave in August so this was much needed. 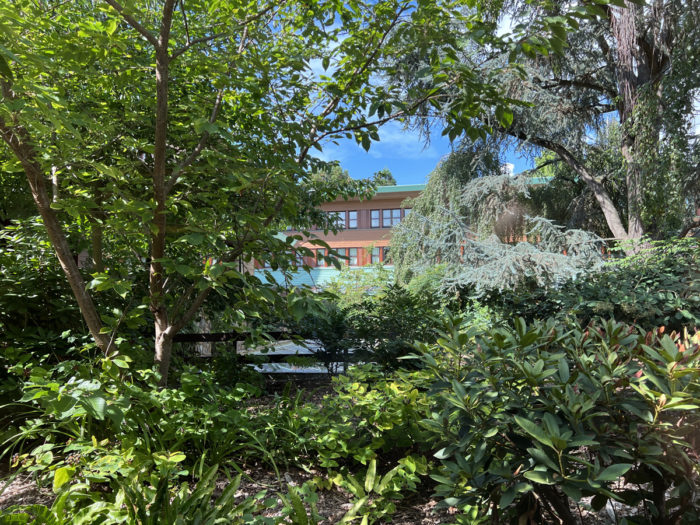 Our room looked out on to some lovely trees, which I forgot to take a picture of. I remembered this after I checked out so I ran to the nearest window in the lobby to take another picture so you can get an idea of what the view was like. 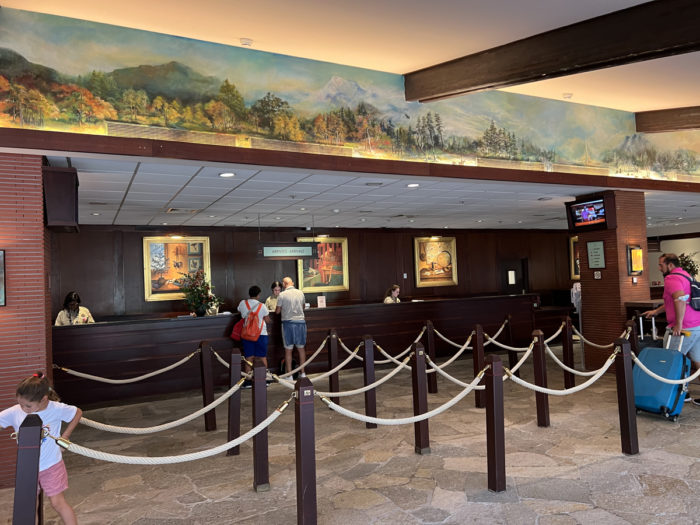 Moving on to the lobby. My party checked in around noon, and while there were a decent amount of other groups waiting to check in, the line moved swiftly. We received the same excellent cast member experience as you’d expect from any other Disney destination around the world. 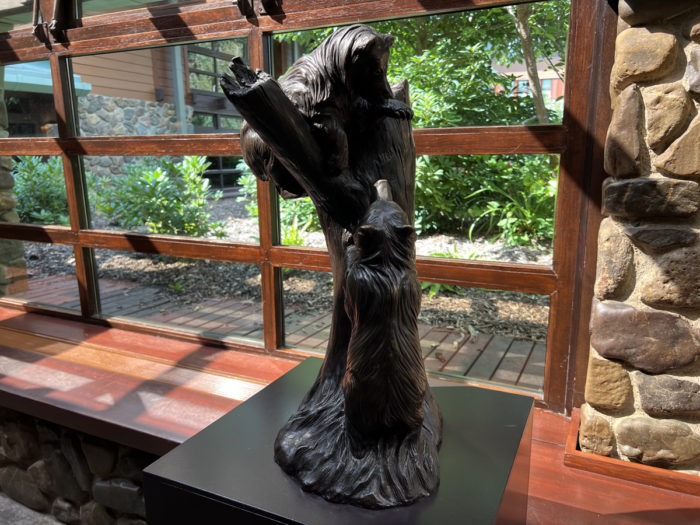 The decor around the lobby and interior of the hotel was fun and cozy. I’m a big fan of bears so I really dig this sort of thing. 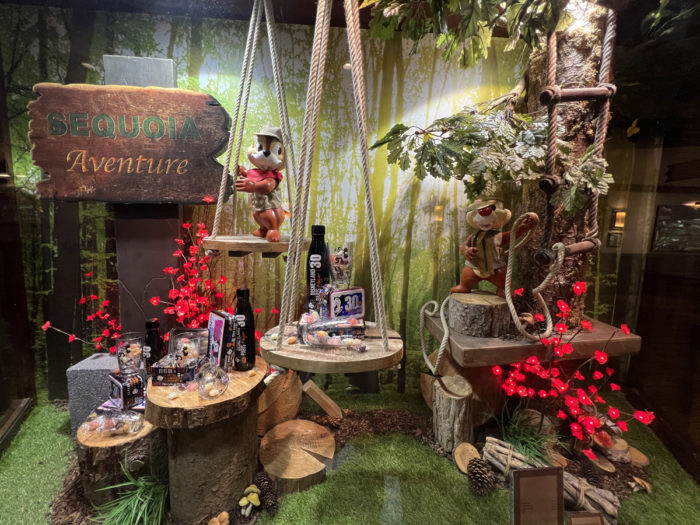 This cute window display is located outside of the hotel’s gift shop, Northwest Passage. 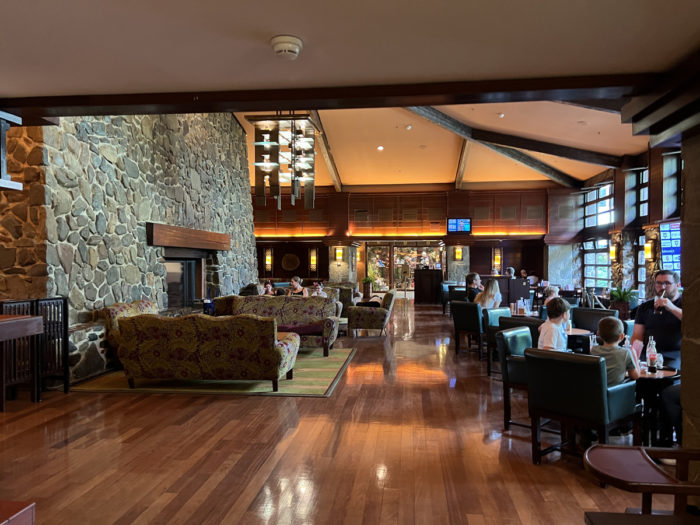 Located near the lobby is Redwood Bar and Lounge which is a nice place to kick back and have a beverage. The hotel also has two on site dining locations, Hunter’s Grill and Beaver Creek Tavern. I didn’t get a chance to try these two locations, but let me know in the comments if you have. Disney Sequoia Lodge also features a fitness center and pool. 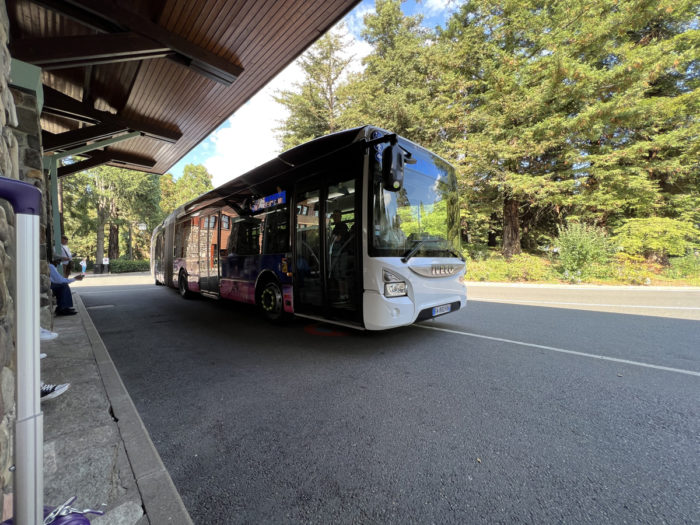 One of the big advantages of staying at one of the official Disneyland Paris hotels is the close proximity to Disneyland Paris and Walt Disney Studios theme parks. However, you’re still looking at a walk that is just under 1 mile in length. The hotel does offer a free bus that goes to and from a location just outside of the entrance of Disneyland Paris. We were told by cast members that buses arrive every 15 minutes, and found this to be accurate. By the way, parking is free if you end up driving to the hotel

Overall our room at Disney Sequoia Lodge was very barebones and basic. Nothing was worn down to the point of looking like it was in shambles, but it definitely felt tired and out of date. The lack of electrical outlets is a big downside in this day and age. On the flip side the best perk for staying on site is daily 1 hour of early entry in to either Disneyland Paris or Walt Disney Studios. This is huge because marquee attractions (such as Big Thunder Mountain in Disneyland Paris, and Crush’s Coaster in Walt Disney Studios) quickly build high wait times that remain the same throughout the day.  However, I’m still torn on recommending staying on site due to the cost. During most times of the year the official Disney rooms will be very expensive, we paid $400 a night during the peak season, and that was with an annual pass discount. There are many offsite hotels located a short train ride away in Val d’Europe. These hotels during our visit would have been around $120 a night. Be sure to shop around and weigh the pluses and minuses along with the cost.

I also wanted to mention that Disneyland Paris doesn’t offer an option to only book a hotel stay on their website. You can only book a hotel plus theme park tickets package. This is obviously a problem if you’ve obtained your tickets some other way, or have an annual pass. This means you’ll need to call Disneyland Paris to check prices and make a hotel reservation over the phone. Save yourself a long distance international call and call the Walt Disney World phone number, (407) 939-3476. An automated system will answer. When it askes what you’re calling about, say “Disneyland Paris hotel reservations” or simply “Disneyland Paris” and Disney’s phone system will automatically connect you.

Another option to save yourself some time is to book through a travel agent. Our TouringPlans travel agents are ready and waiting to help you book your trip to Disneyland Paris, or anywhere else you may want to go in France and beyond. Click the link to get a quote.

Have you stayed at Disney Sequoia Lodge? Are you planning on staying there? If not why did you decide on another hotel? Let me know in the comments.