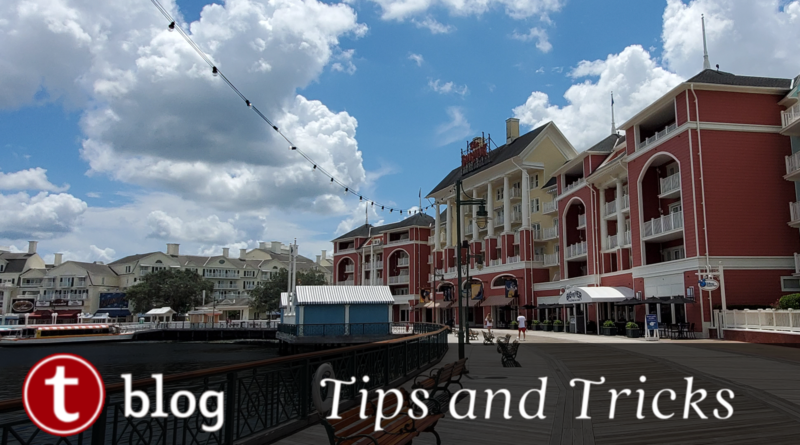 I emerged from the glaring orange sky, muttering long-forgotten Priceline codes, bits of stale churro poking out of my pack. Without access to hidden deals since the second year of the interruption, I had wandered reservationless, spending days on endless Skyliner journeys and stolen evenings huddled in the passive-climate sky ovens dreaming of Murphy beds and deeply discounted rooms.

“There must be other opportunities”, I thought, shuffling along the edge of Crescent Lake. I stopped to pull my very last tiny bottle of hand sanitizer from a zip-lined pocket and fiddled with the mouse-eared cap.

It was then I saw it. Peeking out from tastefully planted, um, plants, and framing the luxurious entrance.

The doors opened and a smiling family emerged. Cool air slapped my face awake and orange sunlight reflected into my eyes. A man said, “Sir, please don’t stand in the doorway, you’re scaring the guests.” He looked down. “And you’ve spilled your sanitizer.”

“The…. web”, I sputtered as a dim memory of Disney Vacation Club rental websites flickered across my synapses. I grabbed the man’s shoulders and implored him “Where can I find the WEB? I need to search for DEALS.”

“Also, where can I warm up some churros?”

It has been more than 8 months since I’ve checked into Touring Plans HQ and written a post for their blog! The last of the real Hotwire hidden deals ran out way back in September, 2021. I think it was a Shmursday. Priceline Express Deals have been missing in action for most of last year and all of this year.

What’s a hidden deal hunter to do? Learn some new tricks!
After he escapes his existential dread, anyway.

My family is looking into taking a nice full trip next summer and thinking that *shudder* there still might not be any hidden resort deals by then. If that’s the case we’re going to need an alternative plan to make the most of the old budget.

One thing that I have half-heartedly looked into is renting Disney Vacation Club (DVC) points. People often say they love the idea that you can stay at a Deluxe resort for a moderate price – but whenever I checked, things still looked a bit expensive to me compared to the deals I could get when Disney had discounts available. Or via hidden deals. *sigh*

But, recently it occurred to me that I may be going about things wrong. (That has happened before, believe it or not.)

If you’re not knowledgeable about renting DVC points, I heartily recommend you read Becky’s Don’t Be Intimidated! How to Rent DVC Points and Jennifer’s How Much Can You Save Renting DVC Points? – DVC Villas Edition blog posts for some in-depth statistical and How-To background on the topic.

After I brushed up on things, I began to focus on the actual DVC rental deals being released on a few of the well-known sites. I rustled up a system to track the dedicated rental deals, which are ones already booked by the DVC owner and for some reason or another they cannot or don’t want to use themselves.

After only a few weeks I found I had amassed a surprisingly (to me at least) high number of unique DVC rentals. Well, kids, who knew? (Probably a lot of you.) There might be something to this whole DVC rental thing after all!

While there are certainly a number of DVC deals out there that are way above my moderate-pricing sensibilities, I found there were also much more than a few that I found really enticing.

As an added bonus, when you take into account that a DVC rental will not incur local hotel tax (a 12.5% savings baby!) AND will not include daily parking fees – that can really make many of these deals a fantastic value.

Let’s look at one example – a 1 Bedroom Villa at Copper Creek this summer is priced in the mid $700s (depending on dates.)

A few weeks ago, a 2-day DVC rental for one of these rooms appeared at the DVC Rental Store for $840 per night. Over the next two weeks, the price dropped twice – down to $595. That still seems a bit rich to me, but I do appreciate how nice those Villas are.

How do those two prices compare in reality? Well, let’s see.

So, that’s a pretty dramatic difference! After taking into consideration taxes and parking fees, the DVC rental is a savings of $561 over the Disney direct price. That is 100% Wowza to me.

Before I move along with more NUMBERS THAT WILL ASTOUND YOU let’s get into some background and tactics for finding these deals.

First, these deals come and go with regularity on the rental sites. Some stay out there waiting to be picked like the last kids at a sad game of grade school dodgeball. Or something. I don’t know. *kicks at rocks with sneakers*

But the really good ones can go in the blink of an eye. If you are in the market for a DVC rental and want to get the dealiest deal, I suggest you come up with some schedule to check for them at regular intervals. That will give you the best chance of seeing the really good ones before they get snapped up.

Daily? Double-daily? Triple dog daily? Dunno, whatever works for you.

A fine example of this concept: The 1 Bedroom Boardwalk Villa shown below appeared late one day and was gone before the end of the next.

The Deals They Keep A Comin’

There has been a median of 25 deals appearing each weekday on these sites, but I’ve also seen days spike as high as 55. So far, weekends appear to be lower volume but I’d still expect 10-20 deals to show up. So, get on that DVC treadmill and keep on running.

Don’t Count on the Drop

Above I mentioned a nice Copper Creek deal that both stayed out there for a few weeks AND dropped 30% over that time.

But don’t get used to it. I had always assumed that as one got closer to a deal’s check in date there would be a pretty good chance you’d see the prices drop. I mean, the renter is going to want to at least get something for the booking, so makes sense they’d sweeten the deal as the end drew nigh? Surprisingly, that may not be the case.

Of the 1,500 or so deals we’ve seen so far, only about 6% have changed in price. (Some even have dropped and then gone back up again! I call no fair on that.) Guess we’ll see how that stat holds up over time.

One word: Stu-Stu-Studio
(Ok, I call creative license with the word count.)

As the deals have scrolled by, a whopping 74% of them have been studios. If that size room works for you you’ve got a much larger number of deals to work with!

Be a One Night Stan
While there are plenty of multi-day rental deals out there, 1 day deals dominate at 22% of all recent deals. If you’re a happy hopper and don’t mind split stays, maybe you might tack an interesting one-nighter or two onto one end of a longer booking!

Flexibility Is Your Friend
Finally, as with anything: If you’re not locked into very specific dates you’ll have more opportunities to choose from. This also goes for things like resort and room type.

Looking at this chart of Boardwalk Villas deals, each dot is a deal. Dates are along the horizontal axis and price goes up along the vertical. It seems like rental deals are relatively spaced out – but I’m thinking if you could shift your trip into mid-July, or August or after the new year you’d have a better chance at getting one o’ them mid-$300-priced Boardwalk studios. 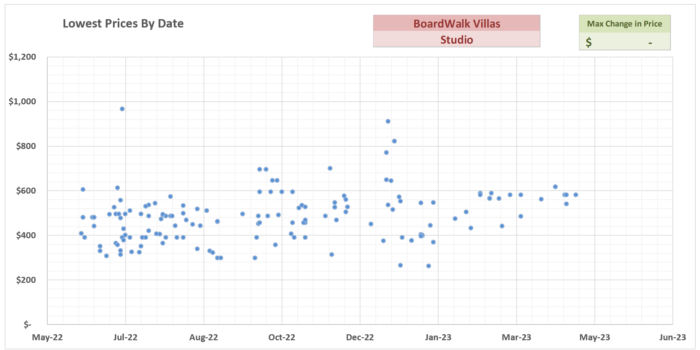 (I’m looking forward to seeing how this chart changes as more rental data comes in.)

Let’s start out big with an Aulani deal – this Poolside Garden View Studio only showed up for rental a week before the check in date, but if you were able to take a quick jump over to Hawaii you could have gotten this room for about 48% off of Disney’s direct booking price. (The deal lasted a few hours before it was gone.) 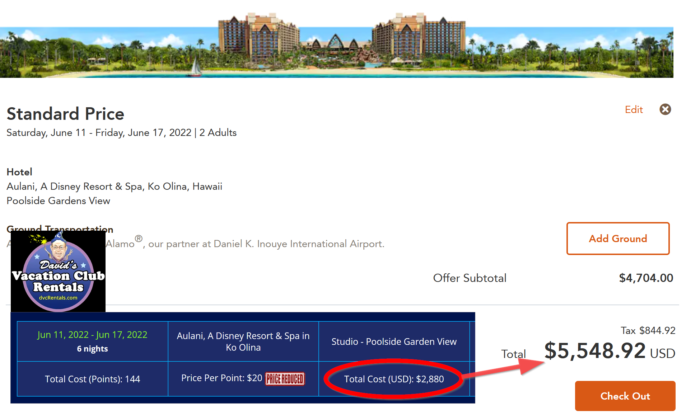 Or, How do you fancy checking into a 6 night Boardwalk Villas studio for $265 ON NEW YEAR’S EVE? (That one lasted for less than a few hours – I only saw it once.) I couldn’t even find a similar room on any nearby date to compare the direct booking price, but the Touring Plans reference has the rack rate for that room at $980.

Let’s be generous and say Disney will run a 30% off rack rate discount for that night – that will bring the direct booking price down to $686 per night. After you factor in taxes and parking, the DVC rental would save you over $3,100!

What’s In It For Me You Ask?

How about a trip between 3 and 6 nights for any room less than $350? Also, while wonderful resorts in their own right, let’s take Old Key West and Saratoga Springs Resorts out of the running just to make the competition a little tighter.

Right at this moment my calculations show there are 32 such deals on the sites I have been checking. DVC Shop Rentals has more than a few of these great deals. They include a 5 night booking for a Deluxe Copper Creek Studio at $340 per night.

How about a 6-night booking for an Animal Kingdom Kidani Savannah View at $324 per night? Rowr.

You can search all of their confirmed reservations here.

One last favorite for today – Over at David’s Vacation Club Rentals you can catch a $329 Preferred Studio at Boardwalk Villas for a 3-night check in on 08/31/2022.

So, do yourself a favor and start watching these DVC rental sites for deals – and if you like this post maybe I can see if Touring Plans can bring more of them your way!

If you like this post – or are dreaming of a DVC deal of your own and have any questions, let us know in the comments!