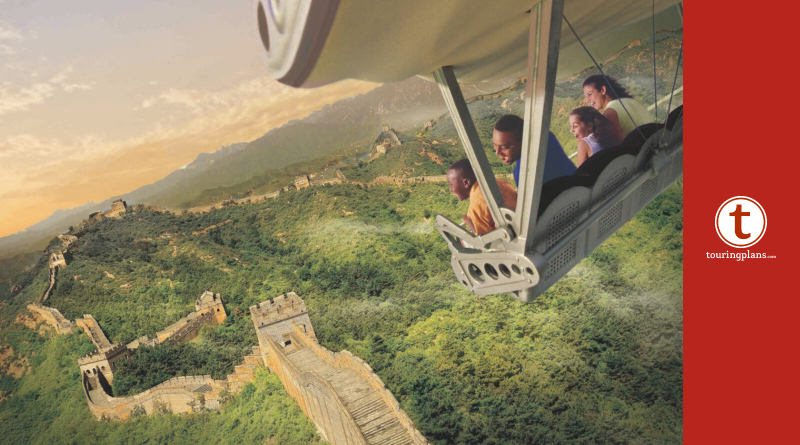 You’re going on vacation to Walt Disney World! The only problem? You’re not sure which attractions are right for you and your kiddos and you have questions. Which attractions are too intense for little ones? What rides do I really need a FastPass+ reservation for? What’s the disability access like for certain attractions? We’re answering all those questions and more in our Everything You Need to Know attraction series with today’s focus on Soarin’ Around the World at Epcot.

What is Soarin’ Around the World?

Where is Soarin’ Around the World? 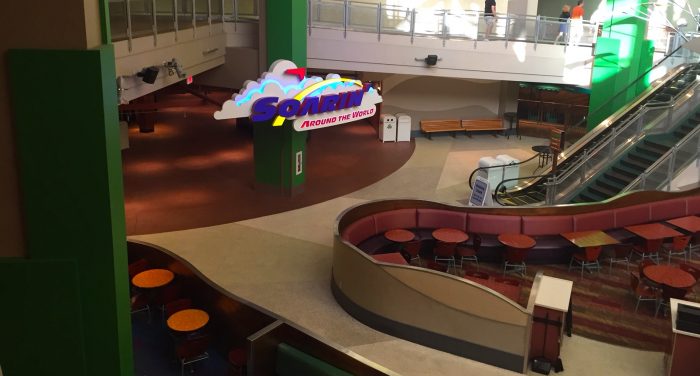 Soarin’ is located inside of The Land pavilion at Epcot. Upon entering the pavilion, guests should move down the stairs or escalator to the first floor and look for the attraction marquee to enter the attraction.

What is the History of Soarin’ Around the World?

Soarin’ Over California was an opening day attraction at Disney California Adventure at the Disneyland Resort in 2001. Due to its popularity, a twin version of the attraction came to The Land pavilion at Epcot in 2005 and quickly became one of the most popular attractions at Walt Disney World as well.

The original film had guests soaring over California landmarks, such as the Golden Gate Bridge, Napa Valley, Malibu, and Los Angeles to a gorgeous score written by Academy Award-winner Jerry Goldsmith.

The clever ride design allowing guests to be loaded on one level and then being lifted up and towards the screen in three levels was created by Imagineer Mark Sumner. He designed the model for this design with an Erector set!

Both Epcot and Disney California Adventure received a new version of Soarin’ in 2016 titled Soarin’ Around the World following the debut of Shanghai Disneyland’s Soaring over the Horizon. In this rendition, guests fly over the world instead of solely California to a score adapted from the original by composer Bruce Broughton. The finale scene depends on the location of the attraction, with the Florida version ending with a flight over Epcot.

What Do You Need to Know About the Queue for Soarin’ Around the World? 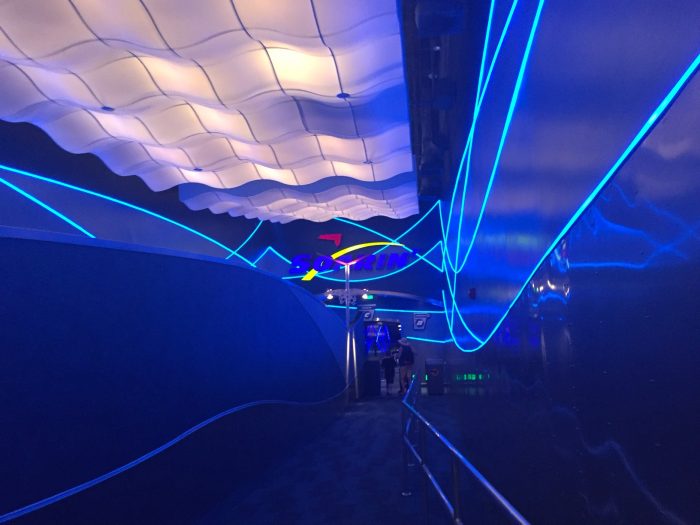 The queue for Soarin’ is a long winding path with the vibe of a sleek, minimalist airport terminal. While it lacks the signature detail of other attraction queues at Walt Disney World, guests can play the Soarin’ Challenge game on the Play Disney Parks app which allows guests to compete in geographical trivia against one another.

Once guests reach the end of this long, long path, they are sent to one of three different theaters or concourses. Once assigned to a row, guests watch a pre-board video illustrating the different landmarks they will see during their flight. This is followed by a now famous safety video starring Patrick Warburton. Following the video, a Cast Member ushers guests into the theater to board.

What are the Ride Vehicles Like for Soarin ‘ Around the World? 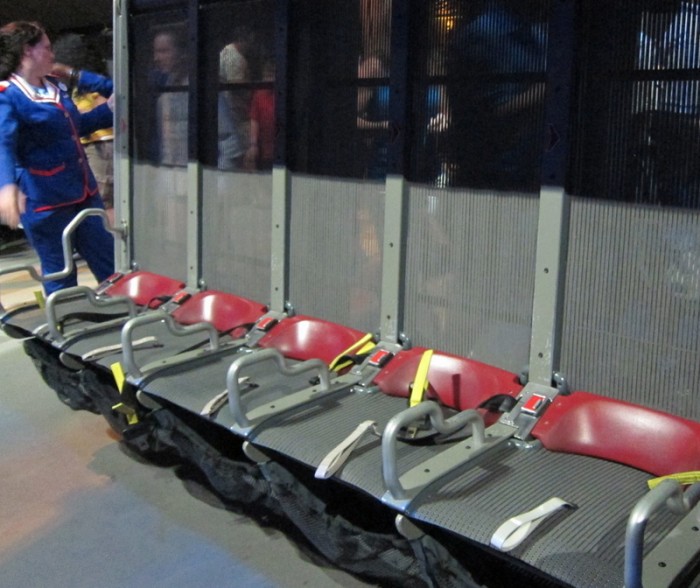 The ride vehicle for Soarin’ is a long bench seat with a tall back with a capacity of ten guests per vehicle. Each seat has safety belt and a mesh bag underneath for personal items. Once the ride begins, the ride vehicle swings forward and up toward the screen leaving guests legs dangling during the ride. It also acts as a flight simulator in that it gently tilts and lifts in sync with the film to create the feeling of flight.

What Do You Need to Know About the Ride Experience on Soarin’ Around the World?

Once the ride begins, the flight simulator ride vehicles will move forward, up, and out toward the massive bowl-shaped screen. Since hang gliding is the ride’s premise, all of the footage is from an aerial perspective and includes landmarks such as the Matterhorn in the Swiss Alps, Greenland’s Isfjord, Australia’s Sydney Harbor, Neuschwanstein Castle in Germany, and Mt. Kilimanjaro. From there, guests glide over the Great Wall of China, the Great Pyramids of Egypt, India’s Taj Mahal, Utah’s Monument Valley, Fiji, South America’s Igazu Falls, and then the Eiffel Tower in Paris. For the finale, guests soar over Epcot where fireworks explode over Spaceship Earth!

As this is a flight simulator, the ride vehicle moves with the film and succeeds in making guests feel as if they’re flying! It’s not a thrill ride, but it’s certainly an exhilarating one. To further enhance the experience, special effects such as wind, sound, and smell are employed as well.

The film relies heavily on computer animation, and it’s kind of obvious in some scenes. Close calls with computer animated animals and objects are also used to transition from one scene to another. Be warned that a few of these transitions, particularly those with a near collision with a seaplane and an eagle, are a little startling! The firework finale can be a little intense as well, particularly for those who are already wary of fireworks and loud noises.

While Soarin’ is an amazing attraction, a huge complaint is the vertical landmarks appear drastically curved and distorted for those riding on the left or right of the screen. To avoid this, once you’re directed to one of the three concourses, politely request to wait an extra cycle for seats in row B1 to have an ideal view.

The ride time lasts about 5 minutes.

What Do You Need to Know About the Accessibility for Soarin’ Around the World?

Wheelchair and ECV users must transfer to the ride vehicle on their own. It’s also important to note that service animals are not permitted on this attraction.

What Do You Need to Know About the Health and Safety Advisories for Soarin’ Around the World?

Guests with a fear of heights may experience difficulty. Motion sickness is a possible, but this isn’t an issue for most guests. I would also warn against those with a fear of fireworks or loud noises.

What are the Height Restrictions for Soarin’ Around the World?

Guests must be at least 40 in. to experience Soarin’. This attraction also offers Rider Swap.

What Do You Need to Know About the FastPass+ for Soarin’ Around the World?

While Test Track, Mission: Space, and Frozen Ever After are popular attractions, Soarin’ succeeds at appealing to all age groups. FastPass+ is definitely recommended even though obtaining a reservation isn’t as difficult as other headliner attractions at Disney World. Expect same-day reservations to be gone by 10 a.m. most days.

Does Weather Affect Soarin’ Around the World?

Soarin’ and its queue are located indoors and out of the elements so weather will not affect this attraction.

What’s the Best Time of Day to Ride Soarin’ Around the World? 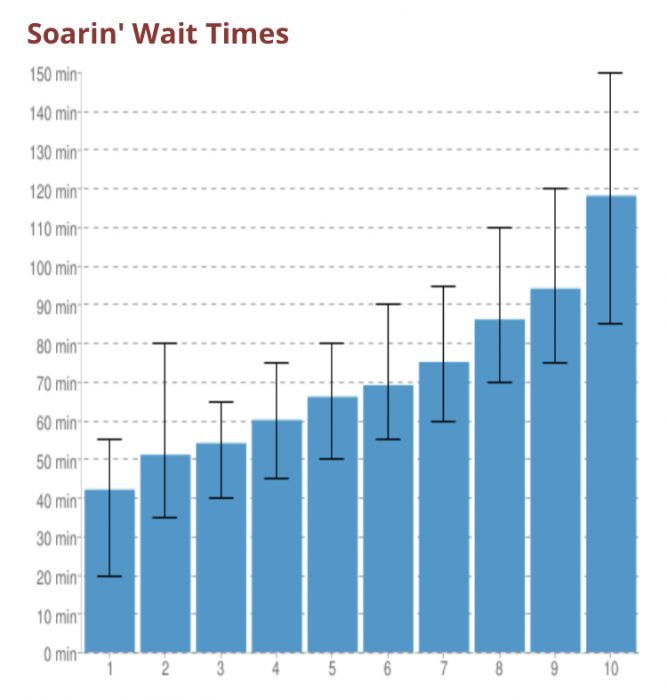 This chart shows you roughly how long you’ll wait for Soarin’ when you visit on a day with a given Epcot Crowd Level. The blue bars represent the average “peak” wait time (that is, how long the line will be at its busiest). The bottom and top black lines represent the range of peak wait times to expect (for you fellow nerds out there: it’s the 5th percentile and 95th percentile of peak wait times). Please note that these are estimates, and for a better forecast for your travel dates, see Soarin’ Wait Times.

Did I answer all of your questions about Soarin’ Around the World? Is this attraction at the top of your family’s vacation to-do list? Let us know in the comments.